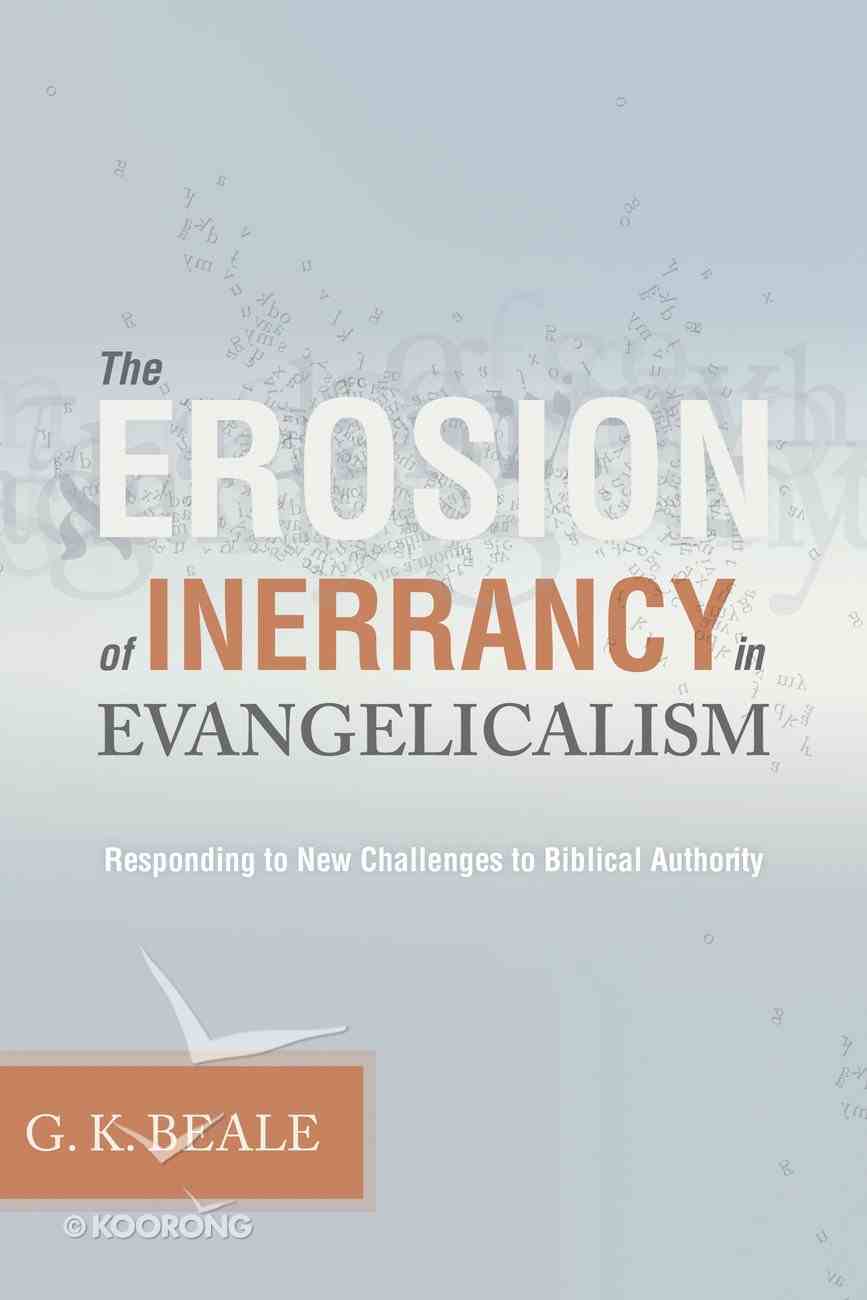 The Erosion of Inerrancy in Evangelicalism

Examines recent postmodern efforts to redefine the traditional evangelical view of scriptural authority and counters with sound logic that supports inerrancy. ^^Due to recent popular challenges to evangelical doctrine, biblical inerrancy is a topic receiving an increasing amount of attention...

The Erosion of Inerrancy in Evangelicalism
G K Beale
eBook

One With Christ: An Evangelical Theology of Salvation
Marcus Johnson
Paperback

Examines recent postmodern efforts to redefine the traditional evangelical view of scriptural authority and counters with sound logic that supports inerrancy.
^^Due to recent popular challenges to evangelical doctrine, biblical inerrancy is a topic receiving an increasing amount of attention among theologians and other scholars. Here G. K. Beale attempts vigorously and even-handedly to examine the writings of one leading postmodernist, Peter Enns, whose writings challenge biblical authority. In support of inerrancy, Beale presents his own set of challenges to the postmodern suppositions of Enns and others.


^^How can the Bible be historically inaccurate while still serving as the authoritative word on morality and salvation? Beale concludes that it cannot, and his work will aid all who support biblical inerrancy in defending their position against postmodern attacks. This is an issue that affects the entire body of Christ.

"Confidence in the authority and inerrancy of Scripture is ebbing today, even in evangelicalism. Postmodernism and certain hermeneutical presuppositions threaten to undermine the foundations of evangelicalism. Greg Beale's sturdy, convincing, and courageous defense of the accuracy and inerrancy of Scripture bolsters our assurance that God's Word is true. Praise God for this scholarly and spirited defense of the truth of Scripture." - Thomas R. Schreiner, Professor of New Testament Interpretation, The Southern Baptist Theological Seminary"At last, a leading biblical scholar has produced a full-blown defense of biblical inerrancy in a user-friendly style. This is just what is needed in the current debate, and Beale has provided it magnificently." - Gerald Bray, Research Professor, Beeson Divinity School"The nature of Scripture has been an ongoing issue of controversy in evangelicalism for decades, yet today the orthodox position of inerrancy is under severe attack as in no other period-and the attack is coming from evangelicals themselves. Beale has done a great service in attempting to bring us back to the right way of thinking about the Scriptures. They are indeed fully inerrant and fully authoritative. This book is a must-read for our generation." - John D. Currid, Carl McMurray Professor of Old Testament, Reformed Theological Seminary"As evangelical scholarship has come of age and evangelical scholars confidently take their place in the mainstream academy, a danger lurks that we might lose any sense of what makes us evangelical scholars. Beale's book sounds a much-needed warning against abandoning our evangelical moorings. Though he is not an Old Testament or ancient Near Eastern scholar by training, he nevertheless provides a penetrating critique of Peter Enns's challenge to evangelical notions of inerrancy, leaning on reputable OT and ANE scholarship in doing so. He also presents invaluable original analyses to bolster his case in areas of his own specialties-early Judaism, hermeneutics, and the Old Testament in the New. I highly recommend this book." - David M. Howard, Professor of Old Testament and Hebrew, New Orleans Baptist Theological Seminary
-Publisher

G. K. Beale (Ph.D., University of Cambridge) is Visiting Professor of New Testament at Westminster Theological Seminary, PA- while holding the position of Kenneth T. Wessner Professor of New Testament at Wheaton College Graduate School in Wheaton, Illinois. His books include The Book of Revelation (New International Greek Testament Commentary), 1-2 Thessalonians (The IVP New Testament Commentary Series), The Right Doctrine from the Wrong Texts? Essays on the Use of the Old Testament in the New, John's Use of the Old Testament in Revelation and The Temple and the Church's Mission: A Biblical Theology of the Dwelling Place of God. He is also a contributor to the New Dictionary of Biblical Theology and his most recent works are We Become What We Worship: A Biblical Theology of Idolatry, Colossians, Philemon (Baker Exegetical Commentary of the New Testament) and The Pastorals (Zondervan Exegetical Commentary).
-Editorial Review.

Art and Faith: A Theology of Making
Makoto Fujimura
Hardback