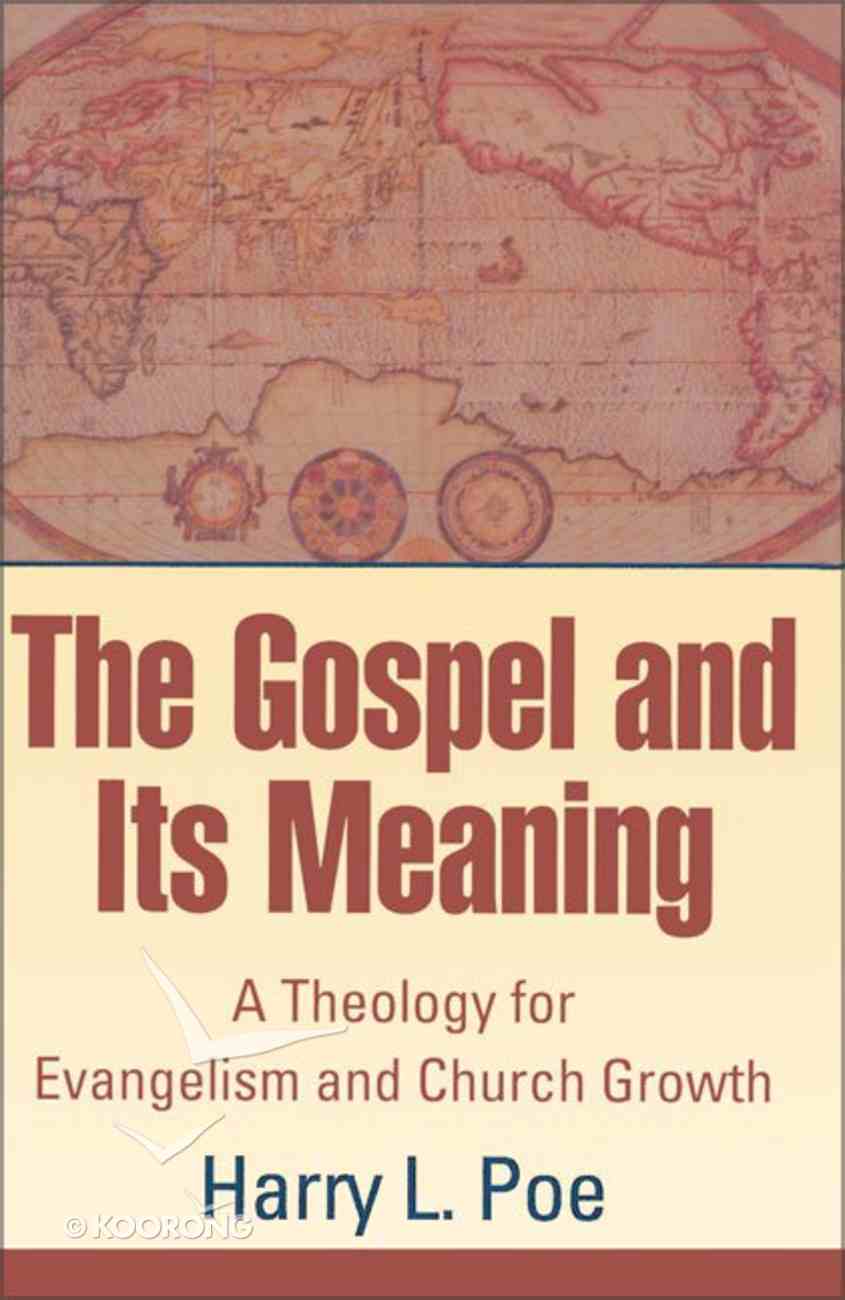 The Gospel and Its Meaning

A theologicalbiblical foundationfor evangelism that does not compromise the gospel message in a pluralisticworld.208 pages, from Zondervan.

Are We Brave Enough?: #5changes to Renew the Local Church and Transform the World
Ian Mayer
Paperback

You Welcomed Me: Loving Refugees and Immigrants Because God First Loved Us
Kent Annan
Paperback

Overflow: Learning From the Inspirational Resource Church of Antioch in the Book of Acts
Matthew Porter
Paperback

A theologicalbiblical foundationfor evangelism that does not compromise the gospel message in a pluralisticworld.208 pages, from Zondervan.

The Gospel speaks to a broad range of concerns--concerns that differ from person to person, group to group, culture to culture. Yet the practice of the twentieth-century church has been to concentrate on one part of the Gospel--repentance and justification--as if it were the whole, and to proclaim that part uniformly, often without meaningful context that would demonstrate the relevance of Christ to the hearer. The Gospel and Its Meaning breaks fresh ground for evangelism. It equips the students of evangelism with theological foundations for reaching diverse groups, from Hindi pantheists to radical environmentalists, without compromising the Gospel's integrity. The Gospel and Its Meaning - Identifies the basic elements of the Gospel - Shows the relationship of these elements to specific doctrines of theology - Identifies theologians and systems that have focused on particular doctrines - Shows which elements of the Gospel deal most clearly with various issues of evangelism - Suggests
-Publisher

1. Renewing the Quest for the Historical Kerygma 2. Creator God 3. Scripture and Fulfillment 4. Son of God/Son of David 5. Death for Sins 6. Raised from the Dead 7. Exaltation 1 8. The Gift of the Holy Spirit 9. The Return of Christ 10. Human Response 336 Pages
-Publisher

Chapter 1Renewing the Quest for the Historical KerygmaThe world is approaching a significant anniversary. The Christian faith has made itself known for almost two thousand years. To say it rose from humble origins hardly describes the unlikeliness of its beginnings. The first followers of Jesus represented a diverse group: fishermen, tax collectors, prostitutes, members of the Sanhedrin, revolutionaries, Pharisees, adulteresses, respectable women. Jesus had only a brief ministry of about three years before his execution by the Romans on a charge of sedition. When the uncertain political circumstances of the day turned against him, the crowds and closest associates of Jesus turned their backs on him. One of his intimates sold him into the hands of his opponents, and all but a handful of the other closest followers scattered.THE PROBLEM OF CHRISTIAN FAITHOne can readily understand how a successful, charismatic leader might have left a powerful legacy by gathering a great following over the course of many years and by creating a movement to carry on the mission, as Mohammed did. Likewise, one can appreciate how a teacher like Buddha prepared a generation of disciples who stood committed to carry on his teachings. In a rarer case, when the message of the thinker gains recognition as being of such value to the culture that the entire political/cultural system appropriates it, a philosophical position may form the basis for society, as happened with Confucius.As one accounts for the presence of the Christian faith after two thousand years, all of the foregoing dynamics have played a part in its survival at various stages in different places and times. The difficulty comes in appreciating how the Christian faith survived the death of Jesus. Unlike Mohammed, Jesus did not overthrow the political/religious power of his day. Unlike Buddha, Jesus did not leave a group of disciples committed to carrying on his teachings. On the contrary, at his death the disciples fled. Unlike Confucius, Jesus did not enjoy the approval and sanction of his culture and its power structure.Quite candidly, the Christian faith comprises a collection of assertions about Jesus, any one of which would render it ridiculous, and the cumulative effect seems utter foolishness. Saul of Tarsus, one of the earlier persecutors of the followers of Jesus, who after his conversion became one of the primary proponents of Jesus, acknowledged that he asked people to believe foolishness (1 Cor. 1:18,25). When Porcius Festus, Roman Procurator of Judea (ca. 60,62), heard Saul''s account of his faith (by then known as Paul), he declared him a madman (Acts 26:24). Two thousand years later, the Christian faith seems even more absurd.Remarkably, the early followers of Jesus had already rejected the absurdities of his teaching before his death. They excised whatever did not conform to their expectations and theological presuppositions. They liked Jesus as a faith healer and preacher who drew large crowds. They liked Jesus as the embodiment of the long frustrated national hope for the revival of the kingdom of Israel. They liked his talk about heaven and his victory over demons. On the other hand, they did not like his talk about dying. Neither did they understand his talk about the resurrection. They accepted the concept of resurrection, but it was supposed to happen at the end of time. Like most religious people, they expressed a preference for the supernatural as long as it happened in a different time and a different place. When Jesus died, their faith in him as a leader also died.The twentieth century has witnessed an earnest and deliberate effort on the part of Christian theologians to make the Christian faith conform to a modern worldview that has no place for what cannot be explained through scientific observation. A variety of theories for the origin of religions and the interpretation of biblical literature has developed from the point of view of faith as well as skepticism.
-Publisher

Harry Lee Poe (PhD, The Southern Baptist Theological Seminary) serves as the Charles Colson University Professor of Faith and Culture at Union University, where he has taught a course on C. S. Lewis for over fifteen years. He is the author of The Inklings of Oxford and C. S. Lewis Remembered, as well as numerous articles. Poe hosts regular Inklings Weekend retreats and is a speaker on Lewis at major libraries worldwide.

Why Would Anyone Go to Church?: A Young Community's Quest to Reclaim Church For Good
Kevin Makins
Paperback