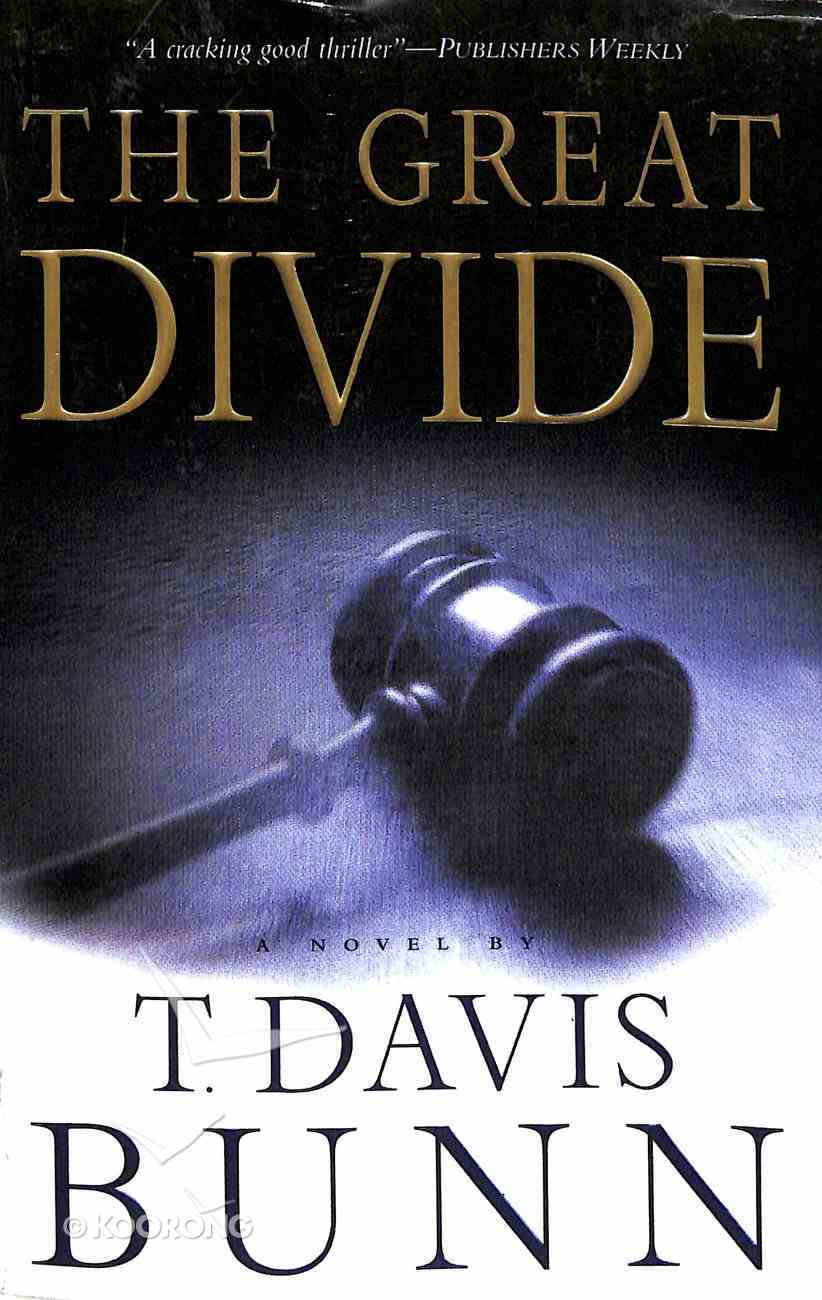 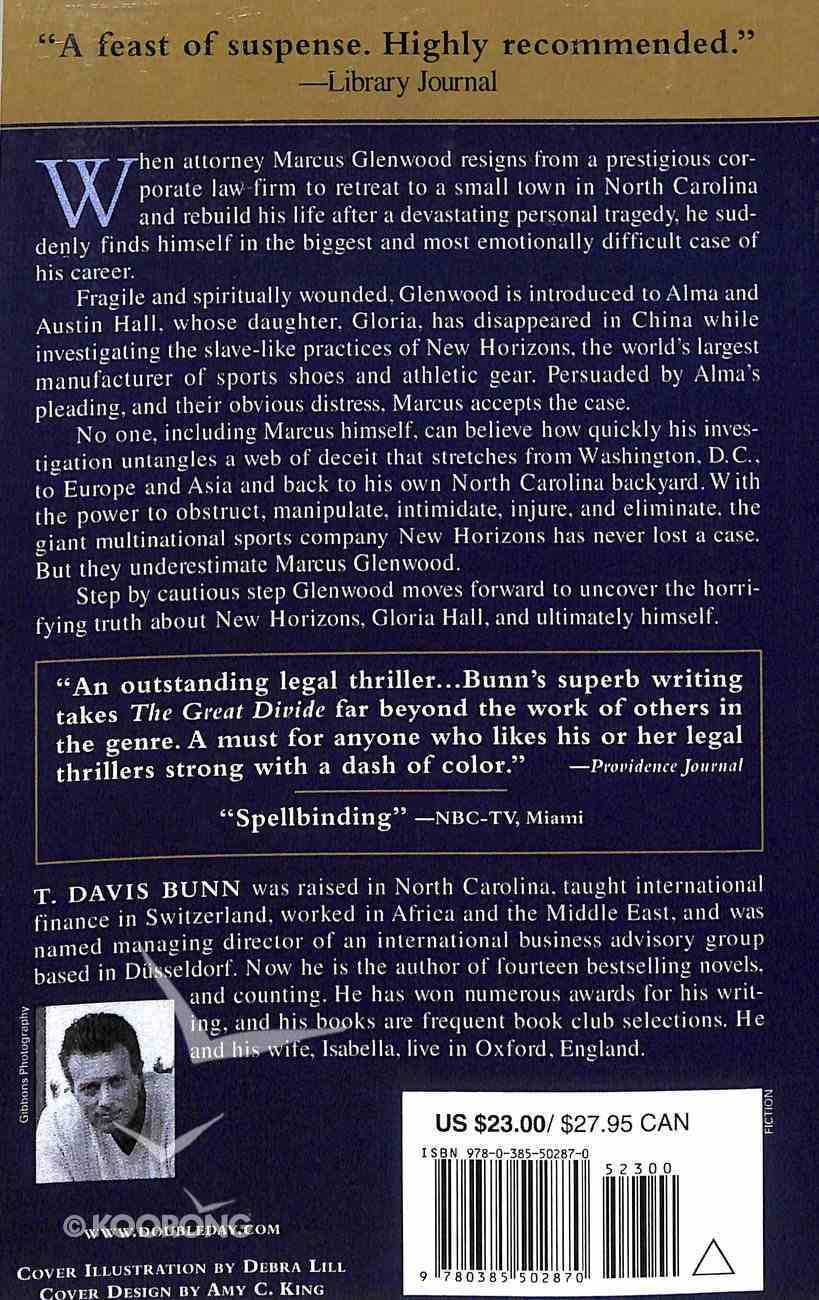 "A cracking good thriller." -- "Publishers Weekly" "A feast of suspense. Highly recommended." -- "Library Journal " When attorney Marcus Glenwood resigns from a prestigious corporate law firm to retreat to a small town in North Carolina and rebuild...

"A feast of suspense. Highly recommended." -- "Library Journal
"
When attorney Marcus Glenwood resigns from a prestigious corporate law firm to retreat to a small town in North Carolina and rebuild his life after a devastating personal tragedy, he suddenly finds himself in the biggest and most emotionally difficult case of his career.
Fragile and spiritually wounded, Glenwood is introduced to Alma and Austin Hall, whose daughter Gloria has disappeared in China while investigating the slave-like practices of New Horizons, the world's largest manufacturer of sports shoes and athletic gear. Persuaded by Alma's pleading, and their obvious distress, Marcus accepts the case.
No one, including Marcus himself, can believe how quickly his investigation untangles a web of deceit that stretches from Washington, D.C., to Europe and Asia and back to his own North Carolina backyard. With the power to obstruct, manipulate, intimidate, injure, and eliminate, the giant multinational sports company New Horizons has never lost a case. But they underestimate Marcus Glenwood.
Step by cautious step Glenwood moves forward to uncover the horrifying truth about New Horizons, Gloria Hall, and ultimately himself.
-Publisher

Davis Bunn is an internationally-acclaimed award-winning author who has sold more than four million books in fifteen languages. He has been honoured with three Christy Awards for excellence in historical and suspense fiction. He has written several bestsellers including Winner Take All, Drummer in the Dark, The Meeting Place, The Book of Hours, Imposter, and The Quilt. He's also the co-author of the Song of Acadia series with Janette Oke. As a result of his book, To the Ends of the Earth, Bunn was named the Novelist in Residence at Regent's Park College, Oxford University. - Publisher.

He scarcely heard her. The meager portion of his mind that functioned normally watched as someone else rose to his feet and approached the witness stand. This other person took the oath and settled into the seat. And waited.

Suzie Rikkers was a tiny waif of an attorney, made smaller by her habit of wearing oversize clothes. Today it was a dark skirt with a matching double-breasted jacket whose shoulder pads were so thick they raised the lapels up in line with her ears. She had been looking forward to this moment for a very long time. &quot;You are Marcus Glenwood?&quot;

&quot;Yes.&quot; He had known the agony of two sleepless weeks over what was about to come. Marcus had visualized the scene in such vivid detail that now, filtered as it was through a fog of fatigue, his imaginings seemed far more real. Suzie Rikkers was an associate in his former firm. He had been instrumental in blocking her promotion to partner. As she walked toward the witness box, she granted him a smile of pure revenge. &quot;You reside in the Raleigh area known as Oberlin?&quot;

&quot;Of course.&quot; She spoke with the voice of a broken pipe organ, all shrieks and fierce winds. &quot;You sold that house, did you not?&quot;

&quot;And how much did you have in cash after paying off the mortgage?&quot;

She spun about. &quot;Your Honor, please instruct the witness to answer the question.&quot;

Judge Gladys Nicols had been Marcus' friend for several years, ever since he had joined her in pressing the state bar to pass a measure requiring pro bono work from all big firms. Pro bono meant &quot;for the public good,&quot; and signified work done for clients who could not pay. Back when most North Carolina legal work was performed by a tight-knit clan of locals, anyone who refused pro bono assignments was shunned. But nowadays, attorneys who regularly accepted nonpaying clients were classed as fools.

Judge Nicols' expression clearly showed how much she disliked leaning over to tell him, &quot;You know the drill, Marcus.&quot;

&quot;Plus another eighteen thousand dollars from the auction of your wife's collection of antiques. Which, I might add, had been valued at around nine times that amount.&quot;

&quot;She didn't want?&quot; Suzie Rikkers' pacing had such a catlike quality that Marcus could almost see her tail twitching. &quot;You contacted Carol Rice while she was still recuperating in the hospital, and when she did not respond immediately, you sold everything she had brought to the marriage! Is that not true?&quot;

&quot;I gave her a chance to take them. I had no place to store--&quot;

Suzie Rikkers chopped him off. &quot;You were a full partner in the local firm of Knowles, Barbour and Bradshaw. That is, until they fired you. Is that not correct?&quot;

&quot;I resigned. They did not fire me.&quot;

&quot;Would you not say that your rapid rise within the firm was due in large part to your wife's connections?&quot;

She leaned into the sneer, adding all the force of her over-small frame. &quot;So you became the youngest partner in the firm's hundred-year history strictly because of your skills as an attorney?&quot;

He knew why Suzie Rikkers despised him, why she had begged for the chance to represent his ex-wife. Marcus had not been the only partner who disliked Suzie. But he was the one formally to suggest she be fired. And the only one to have declared that the woman was emotionally unstable. Borderline insane was how he had put it at the partners' meeting. Minutes of these meetings were supposed to be strictly confidential. But Suzie Rikkers knew. Oh yes. She knew all right. &quot;That is correct.&quot;

She turned so that her laugh could be shared with the man seated directly behind her table. Logan Kendall had no business being in court today, except to watch Marcus bleed. Logan was the newest partner in Marcus' former firm. He had been promoted to take the place that Marcus had vacated. It was only the second time Logan had won a battle against Marcus. He was obviously there to even the score.

Suzie Rikkers went on. &quot;Your claim is hardly substantiated by what has happened since your wife left. You have gone from a partnership in the state's capital to practicing law in the basement of a ramshackle home in a small eastern North Carolina town.&quot; She shared her delight over that with Logan, finishing with genuine pleasure, &quot;You have lost virtually every single one of your clients.&quot;

&quot;I did not ask them to join me.&quot;

&quot;Oh, please.&quot; She spun back around. &quot;Spare us the bald-faced fabrications, all right? Your life is a total shambles. You've lost everything. Why? Because your wife isn't there any longer to prop you up.&quot;

Slowly, Suzie Rikkers approached the stand. The next question was put almost delicately. &quot;Of course, there was nothing left of your Lexus to auction, was there?&quot;

&quot;No.&quot; To his dismay, the blinding tendrils of fatigue began to whither, leaving him acutely aware of the witness box. Trapped in a wood-lined cage, stalked by Suzie Rikkers. &quot;There was not.&quot;

She closed in, and smiled. &quot;Let's speak about the events that led to your wife's hospitalization.&quot;

He heard Judge Nicols' chair creak as she angrily shifted her considerable bulk. But she could not save him. No one could. Marcus had no choice but to sit and endure and hope it would not take too long.

At the plaintiff's table directly in front of him, one woman remained seated beside the chair vacated by Suzie Rikkers. His former mother-in-law observed him with cold loathing. Behind her, Logan Kendall watched Marcus' torment with bitter pleasure.

Suzie Rikkers kept to one side, so as not to block his vision of the pair. &quot;You were down at Figure Eight Island for the weekend. You were there with several new clients. Your wife and children were with you. Is that correct?&quot;

His children. The words left him unable to draw breath.