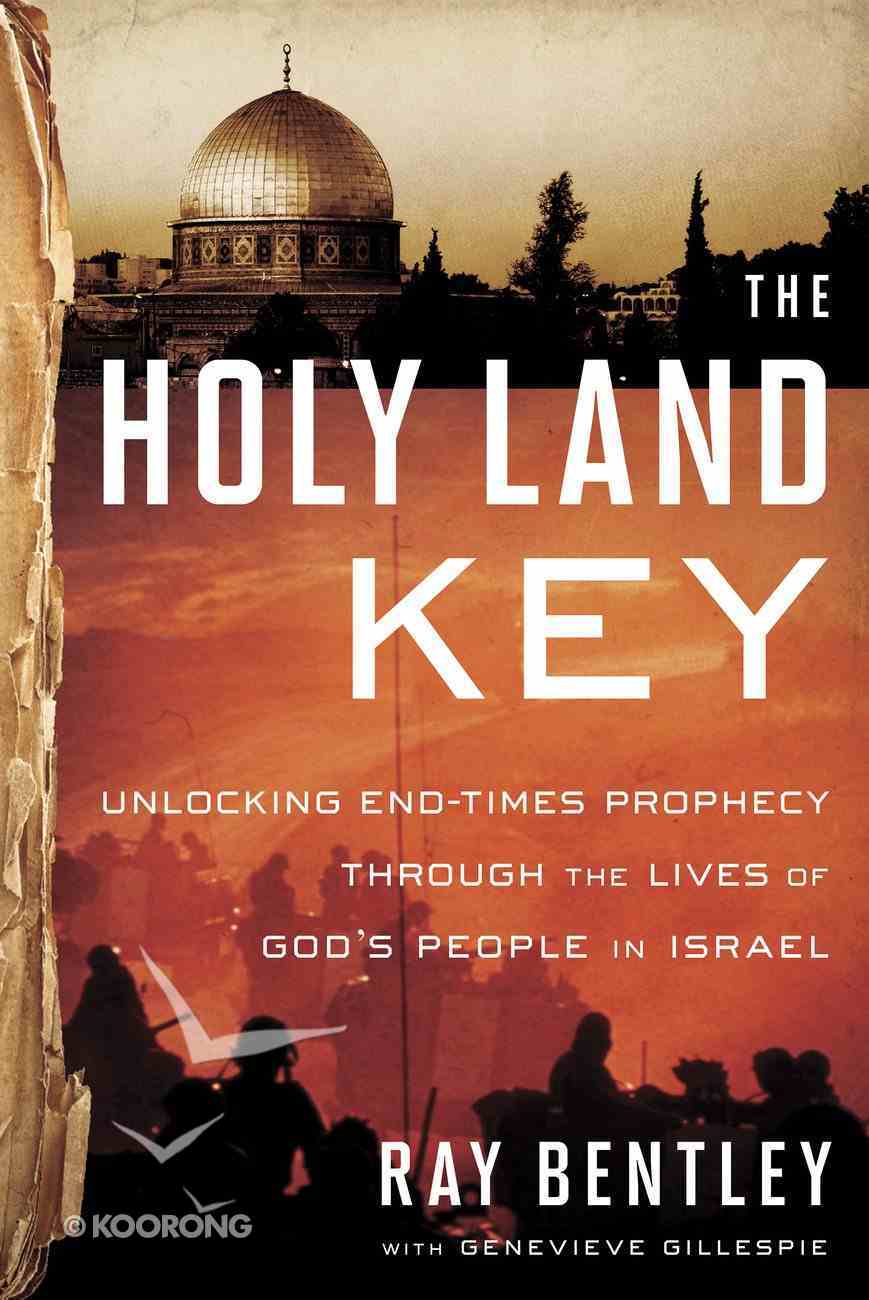 Don&rsquo;t Just Read Prophecy. Step into Its Fulfillment. &#160; The study of prophecy inspires elaborate timelines and speculation about which world leader might rise to power in the last days. But meanwhile, it&rsquo;s far too easy to miss the significant...

Prophetic Words For 2019: What is the Holy Spirit Saying For 2019?
Larry Sparks
Paperback

The Key to the Middle East
Derek Prince
eBook

Genevieve Gillespie is co-author of The Holy Land Key.

RAY BENTLEY's close ties with Israelis and Palestinians have given him a rare insider's perspective on the involvement of Jews, Arabs, and Christians in the events to come. A popular speaker, Bentley's feet-on-the-ground approach brings life and surprising insights to the study of ancient prophecies. The founding pastor of Maranatha Chapel near San Diego, he also hosts the daily Maranatha Radio program, broadcast nationally.

:These Are the People the Prophets Saw

The Holy Land Key is not a book that renews familiar debates over a prophetic time line or argues for or against a particular interpretation of John&rsquo;s Revelation. We will not try to narrow down the most likely candidates for the Antichrist. It is important to read prophecy carefully, to handle its interpretation with great care, and to anchor all our conclusions in God&rsquo;s Word, but we also want to explore some new territories in Scripture that have prophetic
significance.

In the chapters that follow, we will look at certain passages of Scripture from a Hebrew perspective. We also will study what God has written in the heavens and what the Bible says about these heavenly revelations. We will look at the testimony of history, we will study the Jewish calendar and the biblical feasts, and we will even find startling insights based on research done by NASA on blood moons. Paul wrote in Romans 1 that we are without excuse if we fail to see God and His character in the signs that are clear in His creation. God has left signs for us in more places than we can imagine. It would be a mistake to ignore any of them.

God&rsquo;s Covenant with His Chosen People

One of the clearest and most enduring signs is God&rsquo;s unbroken relationship with the Jewish people. The people living today in the Holy Land are the people the ancient prophets saw in the end times. They are the descendants of Jesus&rsquo;s family and of His disciples. They are living evidence of God&rsquo;s plan to gather His people back to Israel after two thousand years of exile.

Israel is a witness to the world. It is not an exaggeration to say that when we look at Israel, we are looking into the eyes of God. When we look at Israel, we see God&rsquo;s intentions for the world. We will explore this further in the chapters that follow. We also will look at patterns throughout history that open our eyes to what the very near future holds. Some of the patterns that most clearly reveal God&rsquo;s plans as well as His heart are found in the Hebrew calendar and the timing of the feasts of the Lord listed in Scripture. The significance of these Jewish holidays is far greater today than was the original purpose of each feast.

Further, it has been revealed that the timing of the feasts&mdash;right down to the specific dates&mdash;coincides with repeated cycles of astronomical events and patterns. The full meaning of this correlation remains to be seen, but it is&#160;significant that God confirms the testimony of history, of the Scriptures, of religious observance, and of the signs He has put in the heavens. All these together point to the coming&mdash;and the return&mdash;of the promised Messiah. Ultimately, they point to Israel&rsquo;s destiny and to the destiny of humanity. The Jews were given the predictions of the ancient&#160;prophets long before the Christians inherited those Scriptures along with the New Covenant of God&rsquo;s Word. It is important to look carefully at the way Jews understand the written testimony of the Hebrew prophets. Familiar prophecies from thousands of years ago are being fulfilled today in Israel. It is no overstatement to say that God&rsquo;s plan is being moved forward by committed Jews, and this, too, is a revelation to us. God called Israel the &ldquo;apple of His eye&rdquo; (Zechariah 2:8). That never has changed, and when God looks at His chosen people today, He sees His plans unfolding at the end of this age. When we look at Israel, we see God&rsquo;s intentions for the world. I will introduce you to modern-day Israelis who&mdash;no matter if they are Jewish or Gentile, Christian or otherwise&mdash;are answering the call of God on their lives. These current-day brothers and sisters of Jesus have much to show us of the ways and the heart of God.

But the people of Israel and their work to restore the Holy Land is only a start. In addition, we will look at the signs of what God will bring to pass on earth. This includes a study of the heavens, the way time is recorded, and more. A&#160; guiding principle here is to identify and learn from patterns that are repeated throughout Scripture and described in 1 Corinthians 15:46: &ldquo;However, the spiritual is not first, but the natural, and afterward the spiritual.&rdquo; What God does in the natural realm is a picture of what He is doing in the spiritual realm. God reveals His plans and His future work, including what is in store at the end of the age, first in the natural world.

Prophecy and its interpretation are a fascinating study. You can get lost in the words of God&rsquo;s ancient messengers, studying their dreams and visions and seeking to piece together the larger picture. It is important to know what God has said through His prophets. However, we need to avoid the tendency to study prophecy with a sort of academic detachment that separates us emotionally&mdash;and spiritually&mdash;from the impact of what God is doing on earth. Prophecy is a biblical teaching to be lived out. We need to bring prophecy to life by connecting it to our lives and the lives of
others.

By getting to know people who live in the Holy Land (Jews, Christians, Israeli Arabs, and Palestinians), we are drawn into more than just the facts of prophecy. We go beyond end-times theories and encounter the people who are involved in the fulfillment of prophecy. These descendants of Jesus are witnessing events He prophesied when He lived in the same land two thousand years ago.

More and more, Christians are taking action by joining with God&rsquo;s people of Israel. The Israelis witness daily what God is doing in their ancestral land. They are eyewitnesses to the unfolding of God&rsquo;s work. You and I&mdash;and all people of&#160; faith who join with Israel in an active way&mdash;are part of the prophetic story. A Jewish friend who helped me go much deeper in my study and understanding of prophecy opened my eyes to this truth.

Ron Nachman, the mayor of a small Israeli city in the West Bank, took great risks to help rebuild Israel after the Jews started returning to their homeland after 1948. He read the Hebrew prophets and studied the ways their visions were becoming reality in the Holy Land&mdash;the land he was committed to help restore.

Men such as Ron see the solidarity of Christians who work alongside Israelis as an important sign of prophecy being fulfilled. The people living in Israel are already on the scene of God&rsquo;s culminating work on earth: the return of His Son to claim His own. As God brings this age to a close, Israelis are having their eyes opened to God&rsquo;s dealings with humanity. It is not simply the building of a nation, protecting Israel against the enemies that surround it, or arguing the issues related to territory and boundaries as part of the so-called Palestinian question. All those are important,
of course, but there is a growing sense that developments are taking place that transcend political, military, and nationalistic concerns. These are spiritual issues and spiritual concerns shared by Jews, Arabs, and Christians alike.

For years we have seen the Arab-Israeli conflict dominate the headlines. As I was writing this book, Israel was criticized for sending aircraft into Syria to destroy missiles supplied by Iran and stored near Damascus. The missiles were said to have a two-hundred-mile range and were en route to Hezbollah fighters. Hezbollah, a sworn enemy of Israel, typically operates in Lebanon but also has joined the fighting in Syria&rsquo;s civil war.1 Global tensions have focused in and around Israel since the rebirth of the Jewish state in 1948. Just about everything concerning Israel&mdash;even its
right to exist&mdash;remains the focus of international debate in spite of decades of negotiations, wars, shifting boundaries, and treaties.

What Are Israelis Hearing from God?

Many of the signposts we have missed in our past study of prophecy come clearly into view only when we study Scripture in tandem with committed Israelis. How do the people of Israel read the signs of the times? What do they anticipate for the future as they face the hostility of enemies bent on their destruction?

To study prophecy apart from the people who live in the Holy Land is similar to studying a road atlas and pretending you&rsquo;ve visited the Grand Canyon or Yosemite National Parks. Reading words on a page is only one of the steps in learning the deeper meaning of prophecy. The prophets delivered their prophecies to people who needed to have their eyes and hearts opened to God&rsquo;s plans. None of this has changed since the days of Isaiah and Jeremiah. God has not changed His plans, nor has He stopped speaking to His people&mdash;as we will see.

Many of the people I am working with in Israel are hearing from God. He is opening the eyes of His people to the reality of His power, His involvement in world affairs, His never-ending love for His people, and His plans. He is setting things in order to bring about His kingdom on earth, just as His prophets foretold.

In The Holy Land Key you will be introduced to contemporary Israelis&mdash;from national leaders to local leaders to ordinary citizens. You will begin to hear from God just as those in Israel hear from Him. Let&rsquo;s start making introductions.

What in the World is Going On?
David Jeremiah
Paperback