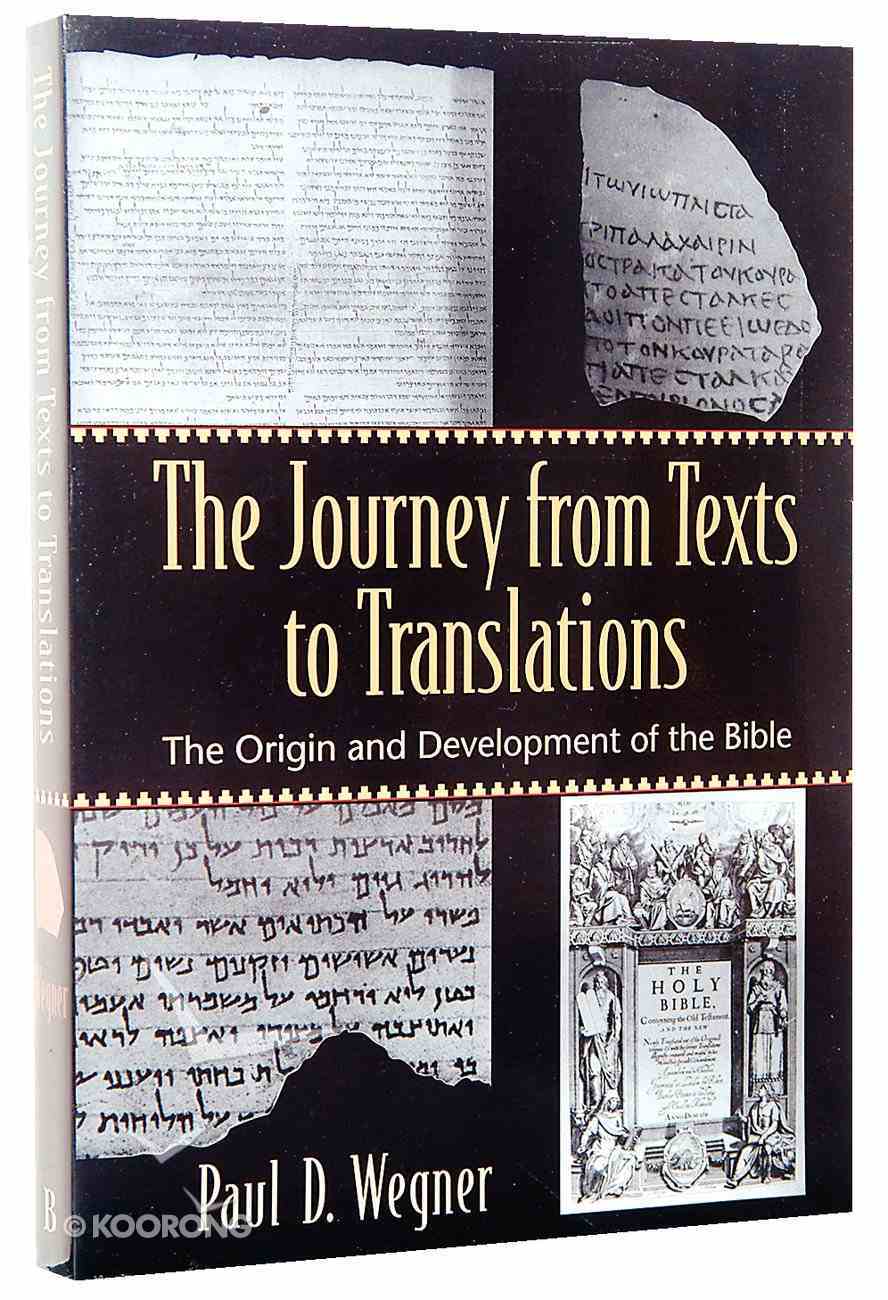 The Journey From Texts to Translations

This comprehensive volume fills the pressing need for a thorough, accessible, and up-to-date general introduction to the Bible. Paul Wegner's work will familiarize students with the many significant issues involved in the writing, collection, canonization, transmission, and translation of the...

This comprehensive volume fills the pressing need for a thorough, accessible, and up-to-date general introduction to the Bible. Paul Wegner's work will familiarize students with the many significant issues involved in the writing, collection, canonization, transmission, and translation of the Scriptures. Keeping in mind the needs of the introductory-level student and lay reader, Wegner admirably avoids or defines the sometimes difficult language and terminology that limit the usefulness of more technical studies.

The work is divided into sections that are logically and clearly arranged, tracing the development of both the Old and New Testaments. Throughout the book the author addresses fundamental questions relevant to all serious readers of the Bible.
Part 1 considers the doctrines of revelation and inspiration, the general contents of the two Testaments, and the relationship between the old and new covenants.


In Part 2, Wegner deals with the historical processes behind the gathering of the texts and considers the factors that influenced both the Jewish and Christian communities as they settled the question of canonicity. Part 3 considers the practical issues involved in the transmission of the biblical text and provides a basic introduction to textual criticism and the comparing of manuscripts with divergent readings.


Part 4 surveys early translations of the Hebrew and Greek texts, such as early Syriac, Coptic, and Latin versions of the Bible.


Part 5 presents a detailed study of English versions, including the many translations and paraphrases that have been produced in recent years. This final section will be particularly helpful to students trying to make sense of the sometimes heated debates over modern translations that have divided evangelical Christians and will help them make informed decisions about which Bible version is best for them.

Throughout the book students will find useful charts that summarize the material, compare divergent positions on disputed questions, or reinforce significant points. Numerous historical and archaeological photos and illustrations enrich the text.


Each chapter concludes with a bibliography to guide the reader to more detailed studies of specific topics. Wegner's volume will be particularly useful for college and introductory-level seminary classes that introduce students to the history and transmission of the Scriptures, but it is also a work that interested lay readers will find accessible and educational. 464 pages, from Baker.

Though written thousands of years ago, the Bible continues to fascinate and guide readers today. This book explains how the Bible that we use came to be in its present form. Wegner introduces the Bible and its arrangement, describes how the various books were collected into a single canon, examines how the Bible was passed from one generation to the next, explores how and why early versions were produced, and discusses the myriad of English translations. Numerous charts, photos, and illustrations are included.
-Publisher

"The Journey from Texts to Translations: The Origin and Development of the Bible, takes you on a journey from the original texts to the most recent English versions. This journey begins with the ancient Hebrew texts of the Old Testament and Greek of both testaments (including the exciting Dead Sea Scroll discoveries at Qumran and New Testament discoveries in Egypt), to the making of many translations--especially in English. Take the journey; Wegner's book is an excellent travel guide."--Philip W. Comfort, professor of Greek and New Testament at Trinity Episcopal Seminary, visiting professor at Wheaton College, and senior editor of Bible reference at Tyndale House Publishers "When it comes to books on the Bible, students are often forced to choose between technical systematic theology or detailed commentaries; a good book on the Bible as Bible is hard to find. Further, what students often look for are 'facts' about the Bible (how it came into being, how books were selected, how the manuscripts fared, and how the translations were undertaken) and this book admirably provides the kind of facts students need. Charts are abundant, tables everywhere, and the text clearly written and clarifyingly illustrated. This is a delightful book which will serve generations to come."--Scot McKnight, Karl A. Olsson Professor in Religious Studies, North Park University "Have you ever wondered about the origins of your Bible or how it relates to other Bibles out there in the marketplace? Have you ever raised the questions why our Bible contains the books it does? Paul Wegner's The Journey from Texts to Translations is a virtual treasure trove of information on these and similar questions. He is an expert guide through the maze of information on Bible origins and development."--Tremper Longman, Professor of Old Testament, Westamont College
-Publisher

Paul D. Wegner (Ph.D., King's College, University of London) is professor of Old Testament at Phoenix Seminary, Scottsdale, Arizona. He is the author of The Journey from Texts to Translations: The Origin and Development of the Bible; Using Old Testament Hebrew in Preaching and A Student's Guide to Textual Criticism of the Bible..