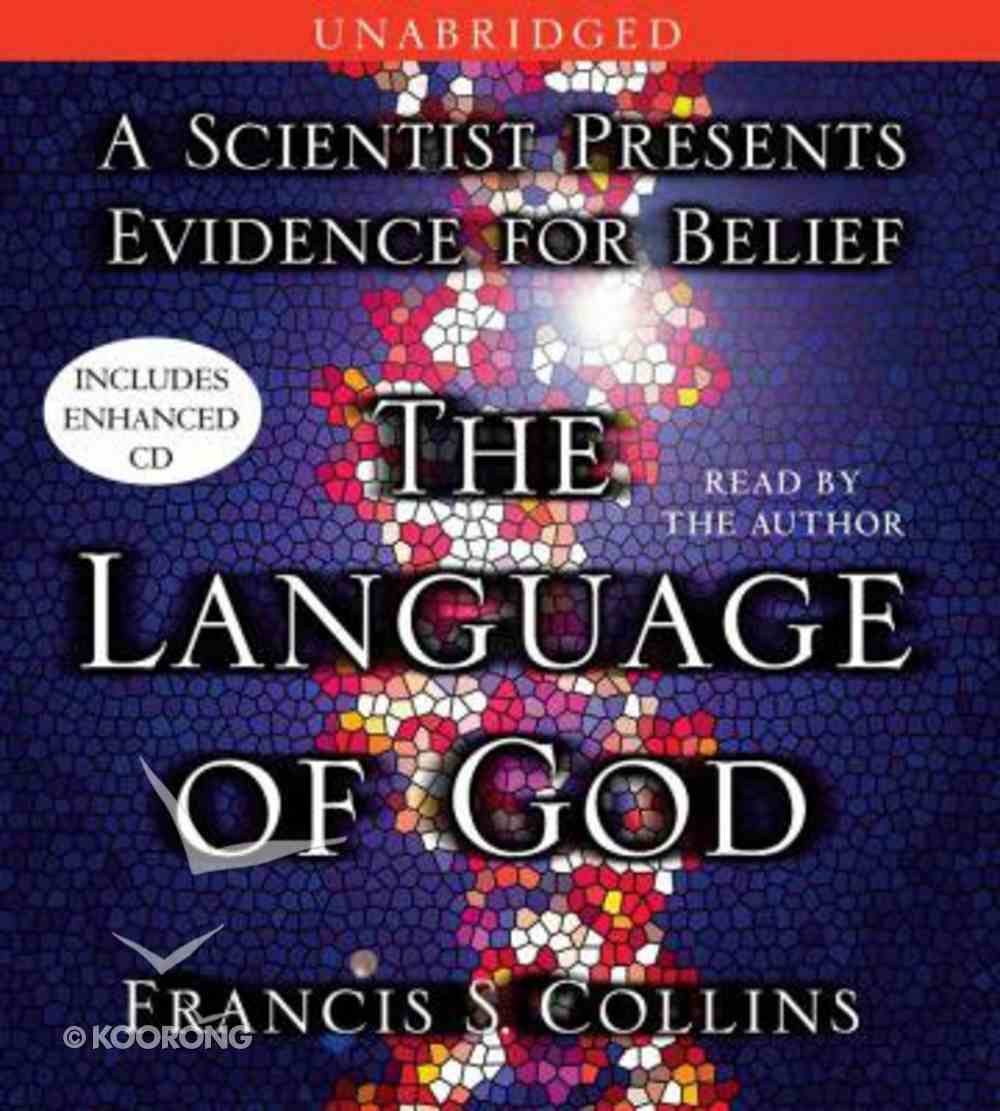 The Language of God

Dr. Francis Collins, head of the Human Genome Project, is one of the world's leading scientists -- yet he is also a man of unshakable faith in God and scripture. Dr. Collins has resolved the dilemma that haunts everyone who...

Praying God's Will For Your Life
Stormie Omartian
CD

Dr. Francis Collins, head of the Human Genome Project, is one of the world's leading scientists -- yet he is also a man of unshakable faith in God and scripture. Dr. Collins has resolved the dilemma that haunts everyone who believes in God and respects science. Faith in God and faith in science can be harmonious -- not separately but together, combined into one worldview. For Collins, science does not conflict with the Bible, science enhances it. ^"The Language of God" makes the case for God and for science. Dr. Collins considers and dismisses several positions along the spectrum from atheism to young-earth creationism -- including agnosticism and Intelligent Design. Instead, he proposes a new synthesis, a new way to think about an active, caring God who created humankind through evolutionary processes. ^He explains his own journey from atheism to faith, and then takes listeners on a stunning tour of modern science to show that physics, chemistry, and biology can all fit together
-Publisher

The Language of GodFrancis S. CollinsDISCUSSION GROUP GUIDE1. "So here is the central question of this book: In this modern era of cosmology, evolution, and the human genome, is there still the possibility of a richly satisfying harmony between the scientific and spiritual worldviews?" (p.6). What view did you have before reading this book on the integration of science and religion? How would you answer Collins's question now?2. On page 23, Collins sums up the Moral Law, stating that "the concept of right and wrong appears to be universal among all members of the human species (though its application may result in wildly different outcomes)." Do you believe the Moral Law exists?3. What caused the author to question his atheism? At the end of the book, he calls on the reader to question his or her current beliefs. Do you think this is a realistic request or will the average reader wait for a "personal crisis" before embarking on a journey of spiritual discovery (p.233)?4. Did the book fairly assess the different religious "options" of atheism, agnosticism, creationism, intelligent design, and theistic evolution, renamed as BioLogos (p.159-211)? Did reading these descriptions change your understanding of any of these views? Which option best explains your beliefs?5. Collins argues that atheism is the least rational of all these choices, since an atheist must claim such extensive knowledge that s/he can conclusively discount the possibility of God. Along those same lines, G.K. Chesterton called atheism "the most daring of all dogmas ...for it is the assertion of a universal negative". Do you agree? Is it possible to be rational atheist?6. Collins states his belief that young earth creationist opinions ultimately harm the religion they represent more than help it: "But it is not science that suffers most here. Young Earth Creationism does even more damage to faith, by demanding that belief in God requires assent to fundamentally flawed claims about the natural world (p.177). Do you agree?7. Collins presents data from the study of genomes (pp. 133 - 141) that argues for a common ancestor for chimps and humans. Do you find the arguments compelling from the anatomy of human chromosome 2, pseudogenes, and ancestral repeat elements? Why could this not be God using the same general themes in multiple acts of special creation?8. Collins quotes (p. 83) St. Augustine's warning (in 400AD) that narrow interpretations of Biblical passages with uncertain meaning may place faith at the risk of ridicule if future discoveries conflict with that narrow interpretation. In what situations today do you think that warning may have relevance?9. Discuss the following quote from Galileo: "I do not feel obliged to believe that the same God who has endowed us with sense, reason, and intellect has intended us to forgo their use" (p.158). What was Galileo trying to say? Do you think this statement is in tune with the author's views?10. In the following quote from the book, Collins refers to "why" questions as those for which science is poorly suited to provide answers: biogenesis as the one event for which science will never be able to provide an explanation: "And as seekers, we may well discover from science many interesting answers to the question 'How does life work?' What we cannot discover, through science alone, are the answers to the questions 'Why is there life anyway?' and 'Why am I here?'" (p.88). Does Collins support this claim elsewhere in the book? Do you agree with him?11. How does the theme of this book fit together with the opening lines of Psalm 19?12. Collins frequently describes the danger of basing religious beliefs on the scientific information that we don't know, referred to as "God of the gaps" (p.93). "Faith that places God in the gaps of current understanding about the natural world may be headed for crisis if advances in science subsequently fill those gaps" (p.93). However, he also
-Publisher

Karl W. Giberson (Ph.D.) is an internationally known scholar whose work has been translated into several languages. He is a popular speaker and writer, and directs the Science & Religion writing workshop at Gordon College. Giberson has published over two hundred articles, reviews and essays and written nine books, includingSaving Darwin and, with Francis Collins, The Language of Science and Faith. He lives on the web at www.karlgiberson.com.

Jesus Among Other Gods: The Absolute Claims of the Christian Message (Abridged, 4 Cds)
Ravi Zacharias
CD