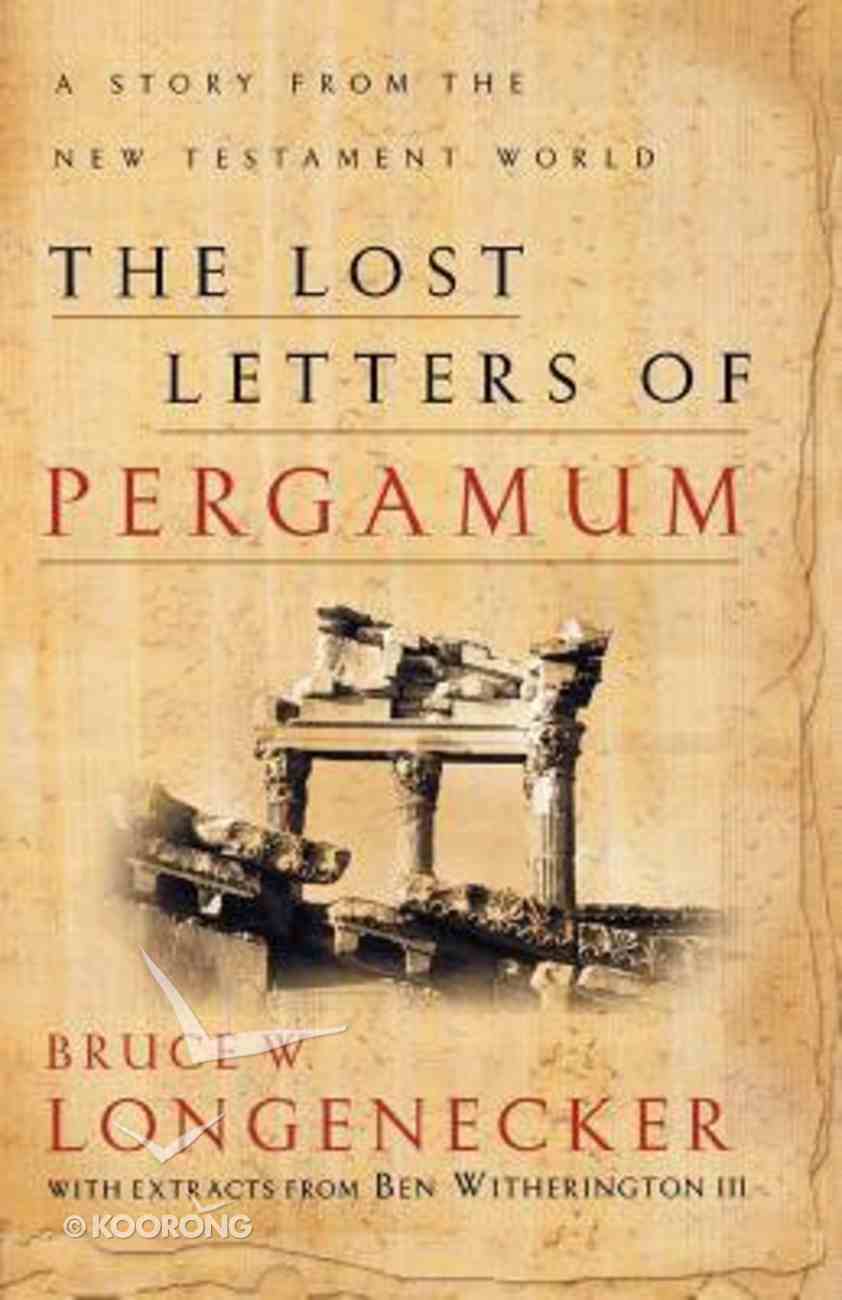 The Lost Letters of Pergamum

Fascinating novel of a Roman citizen's spiritual transformation gives a reliable glimpse into the world of the New Testament and the early church.
-Publisher

Transported two thousand years into the past, readers are introduced to Antipas, a Roman civic leader who has encountered the writings of the biblical author Luke. Luke's history sparks Antipas's interest, and they begin corresponding. As Antipas tells Luke of his reactions to the writing and of his meetings with local Christians, it becomes evident that he is changing his mind about them and Jesus. Finally, a gladiatorial contest in Pergamum forces difficult decisions on the local Christians and on Antipas. While the account is fictional, the author is a respected biblical scholar who weaves into this fascinating scenario reliable historical information. Bruce Longenecker is able to mix fact and fiction and paint an interesting and valuable study of the New Testament world and early Christianity. Readers are invited to view Jesus and the early church from a fresh perspective, as his first followers are brought to life. More reliable than typical historical fiction and far more intere
-Publisher

"Using the time-honored form of a collection of letters--one thinks of the collected letters of Pliny the Younger, many from the same area and roughly the same time as these fictive missives--Longenecker provides, by means of an informative and delightful fiction, a remarkably clear and accurate picture of Christian existence in the eastern Mediterranean world of the first century. One comes away from this book-a ''historical novel'' in the best sense-both charmed and informed. It is a thoroughly delightful read, from which both beginners and experts will profit."-Paul J. Achtemeier, Herbert Worth and Anne H. Jackson Professor Emeritus of Biblical Interpretation, Union Theological Seminary in Virginia"Longenecker''s Letters present in a fascinating and compelling way the contexts of Second Temple Judaism and Greco-Roman urban life. And the narrative he weaves is not only believable but also engaging, both academically and personally. This untraditional presentation deserves a wide readership among all concerned more traditionally with the ethos of New Testament backgrounds."-Joel B. Green, Asbury Theological Seminary"Come, you novel readers, and lay aside your farm romances, your prairie narratives, your theological thrillers, your second-coming serials, and pick up the gripping tale of Antipas--historical fiction, empire wide, martyr-deep, too true not to have happened. But beware the power of this story''s addiction. Do not begin this book unless you are willing to be putty in the storyteller''s hands, for he will force you to take up residence in an old world, about to be reborn in the blood of good souls. No fiction these souls! Real they are, and their reality will cause you to cry out to them, ''Adelphos-Brother! I had to see you die, so I might learn to live.''"-Calvin Miller, professor of divinity, Beeson Divinity School"A savvy and creative introduction to the New Testament world, disguised as a collection of ''lost'' letters between Luke and several well-positioned members of Roman society. The genius of the book lies in its fusion of current New Testament scholarship with a very plausible, personal narrative: the sobering story of one man''s shift in allegiance from Caesar to Jesus. Along the way we overhear pagan reactions to Jesus'' message and endearing stories from household churches; we sense the perils of sea travel and witness the horrors of the Roman games; we identify with privileged benefactors and hurt for subsistence farmers. Anyone hunting for a reliable, if not always comfortable, guide to the dangerous world of the first-century Roman Christianity should be glad these papers were finally ''discovered.''"-Bruce Fisk, assistant professor of religious studies, Westmont College"Through the device of an extended correspondence between the evangelist Luke and Antipas, a resident of Pergamum, Bruce Longenecker brings early Christianity to life. The characters are vivid and believable, and they introduce the reader to a rich historical and cultural context. Those familiar with early Christianity will admire the imaginative way Longenecker builds on the best of modern scholarship, and those new to the field will learn a good deal as they eavesdrop on this conversation. This book is both a delight to read and a reliable guide to the beginnings of Christianity."-Professor Frederick J. Murphy, Department of Religious Studies, College of the Holy Cross"This book is a creative and enjoyable story that is true to much of what we know about early Christianity in its environment. The narrative both teaches and engages the imagination as to how events in late first-century Pergamum might have happened."-Carolyn Osiek, professor of New Testament, Catholic Theological Union"This fictional correspondence is not true, but it certainly could have been. Longenecker writes a very engaging account of several characters who, in their different ways, came to experience and respond to the risen Jesus Christ through Luke''s narrative. I was esp
-Publisher

Dr Bruce W. Longenecker (Ph.D., University of Durham) is professor of religion and holds the W. W. Melton Chair at Baylor University, previously Senior lecturer in New Testament Studies and Director of Operations at the University of St. Andrews, Scotland


His books include Narrative Dynamics in Paul: A Critical Assessment; Engaging Economics: New Testament Scenarios and Early Christian Reception; The Lost Letters of Pergamum: A Story from the New Testament World; Rhetoric at the Boundaries: The Art and Theology of New Testament Chain-link Transitions and most recently Remember the Poor: Paul, Poverty, and the Greco-Roman World.
Koorong - Editorial Review.