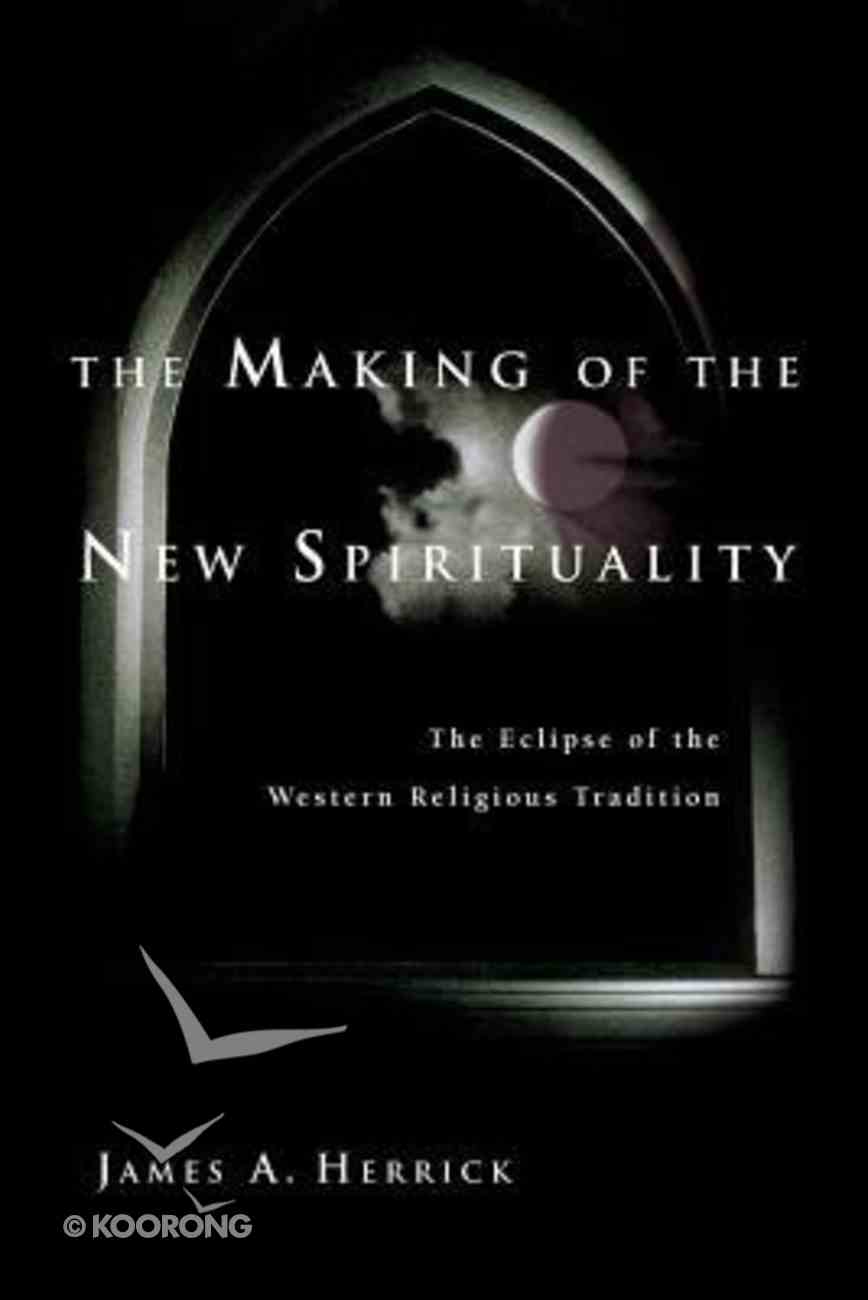 The Making of the New Spirituality

Religions in the Making
John B Cobb (Jr)
eBook

Between One Faith and Another: Engaging Conversations on the World's Great Religions
Peter Kreeft
Paperback

An Introduction to the Theology of Religions
Veli-matti Karkkainen
eBook

Between One Faith and Another
Peter Kreeft
eBook

One of Preaching magazine's 2004 "Top Ten Books Every Preacher Should Read"! Neo-paganism. The paranormal. Astrology. Nature religion. Holistic thinking. Healing. New Age. New spirituality. A massive shift in Western religious attitudes has taken place almost without our noticing it. The Judeo-Christian tradition of Western culture has slowly but steadily been eclipsed by a new way of viewing spirituality.

This shift has been in the making for some three hundred years. James A. Herrick tells the story of how the old view has been dismantled and a new one created not primarily through academic or institutional channels but by means of popular religious media--books, speeches, magazines and pamphlets, as well as movies, plays, music, radio interviews, television programs and websites.

Although the new spirituality is diffuse and eclectic in its sources and manifestations, Herrick demonstrates a significant convergence of ideas, beliefs, assumptions, convictions and images in the myriad ways this New Religious Synthesis makes its way into our culture. In fact, the new spirituality, says Herrick, directly calls into question each major tenet of Judeo-Christian tradition and so represents a radical alternative to it.

Interest in spirituality increases while participation in institutional religion wanes. Many welcome this evolution of religion. However, few are familiar with its roots, and fewer still have critically examined its prospects. As we stand at a spiritual crossroad, Herrick questions whether we are wise to discard the Western religious tradition and adopt the new spirituality.
-Publisher

Acknowledgments1. Introduction: A Changing View of the Spiritual WorldSpiritual Changes: A New Age of Belief?Bestsellers and Blockbusters: Spirituality Goes PublicTalking About SpiritualityThe Revealed World and the New Religious SynthesisGoals of the Study2. Antecedents of the New Religious Synthesis: A Brief History of Alternative Spirituality in the WestSpiritual Communities in the Middle AgesMagic and the Hermetic TraditionKabbalah: Secrets in the PentateuchNeo-Platonism and Magical ScienceEuropean MysticismHumanism and the Rise of Biblical CriticismConclusion3. The Rise of Biblical Criticism: Allegory, Myth, Codes and the End of HistoryThomas Woolston and the English DeistsLessing, Strauss and German CriticismJohn Shelby Spong Rescues the BibleMichael Drosnin's The Bible CodeConclusion4. The Ascent of Reason: Birth of a DeityPeter AnnetVoltaire and Liberated ReasonThomas De QuinceyAmerican New Thought: Minds as Divine Healing ForceAyn Rand's Argument for ReasonConclusion5. Science and Shifting Paradigms: Salvation in a New CosmosThomas Paine on the Hope of ScienceRobert Green Ingersoll: Science and DeliveranceCarl Sagan: From The Demon-Haunted World to Alien ContactThe New Physics: Science and Ancient WisdomConclusion6. Evolution and Advancement: The Darwins' Spiritual LegacyErasmus DarwinLamarck and SpencerCharles Darwin: Naturalist ProphetThe Spiritual Vision of Darwin's Early DefendersJulian Huxley: Transhumanism and the Moral ElitePierre Teilhard de Chardin: Reaching the Omega PointJames H. Austin: Evolving Brain, Evolving SpiritJames Redfield: The Celestine ProphetScience Fiction and Human Evolutionary DestinyConclusion7. Pantheism in the Modern World: Nature or GodSpinoza and TolandRalph Waldo EmersonErnst Haeckel and The Riddle of the UniverseBergson and ShawA New Pantheistic PhysicsConclusion8. The Rebirth of Gnosticism: The Secret Path to Self-SalvationThe Fundamentals of GnosticismJacob Ilive: Enlightenment GnosticismJoseph Smith's Yankee GnosticismCarl Jung and the Gnostic ImpulseJean Houston: Gnosticism and the New AgeScience Fiction: The Final Gnostic FrontierConclusion9. Modern Shamanism: Spirit Contact and Spiritual ProgressEmanuel SwedenborgVictorian Shamans: Occultism, Theosophy and SpiritualismJohn Mack and UFO AbductionPaul Ferrini and the Jesus PhenomenonConclusion10. The Mystical Path to Pluralism: Discovering That All Is One in ReligionAn Original ReligionR. M. BuckeFrithjof Schuon and Transcendent Religious UnityJoseph Campbell: The Perennial Philosophy as Pluralistic HopeMarcus Borg and Jesus the Spirit PersonConclusion11. Conclusion: A New Spirituality for a New AgeTaking Leave of HistoryThe Advent of ReasonTheological ScienceSpiritual EvolutionPantheismThe New GnosisShamans and the Spiritual FutureMystical PluralismFinal Considerations: A New and Better Way?NotesIndex of NamesIndex of Subjects
-Publisher

James A. Herrick (Ph.D., University of Wisconsin) is Guy VanderJagt Professor of Communication at Hope College, Michigan. He is the 2007 recipient of the Ruth and John Reed Faculty Achievement Award. He is a specialist in Rhetoric, Argumentation and the development of spiritualities through mythologies. Some of his recent publications include The Radical Rhetoric of the English Deists (University of South Carolina Press), Argumentation (Strata), The History and Theory of Rhetoric (Allyn & Bacon), Scientific Mythologies: How Science and Science Fiction Forge New Religious Beliefs (IVP Books) and The Making of the New Spirituality (IVP Books).