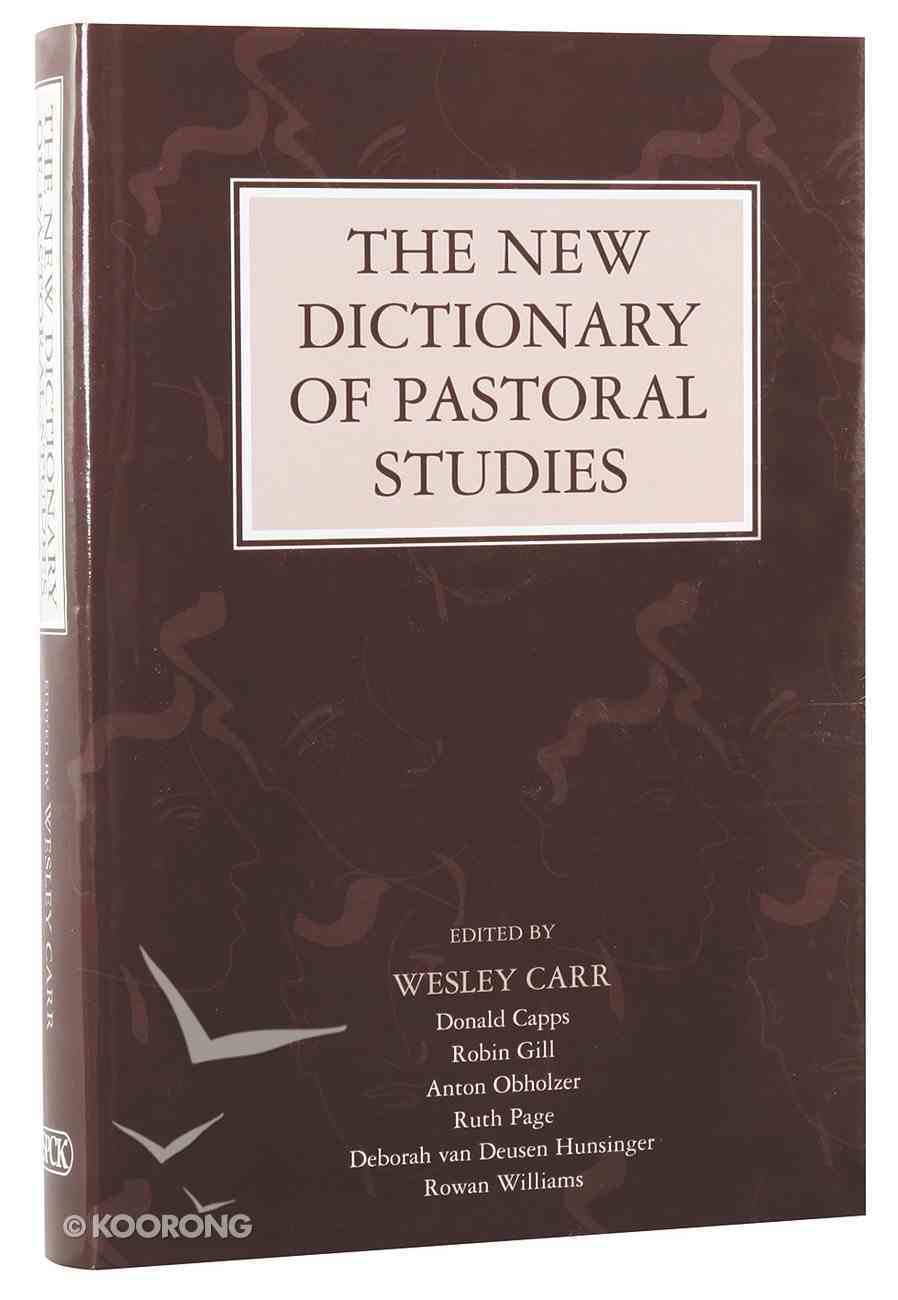 The New Dictionary of Pastoral Studies

With distinguished editors, experts in their fields, and contributions from over 200 practitioners and academics, The New Dictionary of Pastoral Studies provides an unrivalled source of information for anyone involved in the broad spread of disciplines that touch on pastoral...

With distinguished editors, experts in their fields, and contributions from over 200 practitioners and academics, The New Dictionary of Pastoral Studies provides an unrivalled source of information for anyone involved in the broad spread of disciplines that touch on pastoral studies.

An invaluable resource, the dictionary provides succinct definitions and background information on over 700 subjects with extensive cross-referencing and a clear, informative style. The New Dictionary of Pastoral Studies offers the most up-to-date and comprehensive coverage of this important and expanding subject.
-Publisher.

This text provides accessible, accurate and high-quality information on the broad spread of disciplines that touch on pastoral studies. It is designed for a range of potential users, including undergraduate students of theology, ordinands and members of the clergy, plus those involved in social care and psychology, who could turn to it for rapid orientation on a particular topic.
-Publisher

In this text, the author provides accessible and accurate information on the broad spread of disciplines that touch on pastoral studies.
-Publisher

Dr Ruth Page (D.Phil. at Oxford University ) is the first woman to serve as principal of New College, which houses the faculty of divinity of the University of Edinburgh,, now retired, is an ordained minister of the Church of Scotland who began her career as a schoolteacher. In addition to publishing articles in scholarly journals and contributing chapters to edited volumes, she served as an editor of SPCK's recently released Dictionary of Pastoral Concern. Dr. Page is the author of four books published by S.C. M. Press, including God and the Web of Creation (1996), in which she proposes an environmentally sensitive doctrine of creation, and God With Us: Synergy in the Church (2000), a reflection about the future of Christian churches in the postmodern world.

Robin Gill (Ph.D., University of London) is Michael Ramsey Professor of Modern Theology at the University of Kent, and an honorary Canon of Canterbury Cathedral. He is a member of the BMA Ethics Committee and has been a member of the Medical research Councils Stem Cell Steering Committee. He is a regular contributor to the Church Times.

Donald Capps is Professor Emeritus of Pastoral Theology at Princeton Theological Seminary. He has written many books, including "The Decades of Life" and "Jesus the Village Psychiatrist".

The Very Reverend (Arthur) Wesley Carr, KCVO, (PhD., University of Sheffield, DLitt., Bristol) was Dean of Westminster 1997-2006. He took the funeral service for Diana, Princess of Wales; five years later he took the funeral of Queen Elizabeth the Queen Mother. In 1998 he was at the centre of a controversy over the sacking of the Abbey's organist, Martin Neary, who had set up a private company to avoid tax on payments from outside for musical services rendered.
Dr Carr has written both academic and pastoral books such as Angels and Principalities (Cambridge, 1977/2005) The Priestlike Task (SPCK,1985), Brief Encounters (SPCK,1985), Pastor as Theologian (SPCK, 1989/ 2008), Say One for Me (SPCK,1992), Handbook of Pastoral Studies (SPCK, 1997) and Some Reflections on Sin and Evil (Free Associations Press, 2001).

Deborah van Deusen Hunsinger (Ph.D. from Union Theological Seminary in New York City) is professor of pastoral theology at Princeton Theological Seminary. An ordained Presbyterian minister, she is interested in educating clergy and laypeople to offer theologically sound and psychologically informed pastoral care in the church. As a Fellow in the American Association of Pastoral Counselors, she has received extensive training in a variety of therapeutic modalities, having worked with individuals, couples, families, and groups. She is a member of the Society for Pastoral Theology and of the Karl Barth Society of North America. Her major publications include Theology and Pastoral Counseling: A New Interdisciplinary Approach (Wm. B. Eerdmans, 1995), The New Dictionary of Pastoral Studies, ed. Wesley Carr, Donald Capps, Robin Gill, Anton Obholzer, Ruth Page, Deborah van Deusen Hunsinger, Rowan Williams (SPCK and Wm. B. Eerdmans, 2002) and Pray without Ceasing: Revitalizing Pastoral Care (Wm. B. Eerdmans, 2006).

Rowan Williams(PC, DPhil, DD, FBA) is Archbishop of Canterbury, the highest office of the Church of England. Williams is a distinguished theologian and poet.He is the author of over twenty books including: Grace and Necessity: Reflections on Art and Love; Why Study the Past?; Anglican Identities; Darkness Yielding; Writing in the Dust: Reflections on 11th September and Its Aftermath: Arius: Heresy and Tradition; Christ on Trial; On Christian Theology; Open to Judgement: Sermons and Addresses; and Resurrection: Interpreting the Easter Gospel.

Ultimate Bible Dictionary: A Quick and Concise Guide to the People, Places, Objects, and Events in the Bible
Hardback