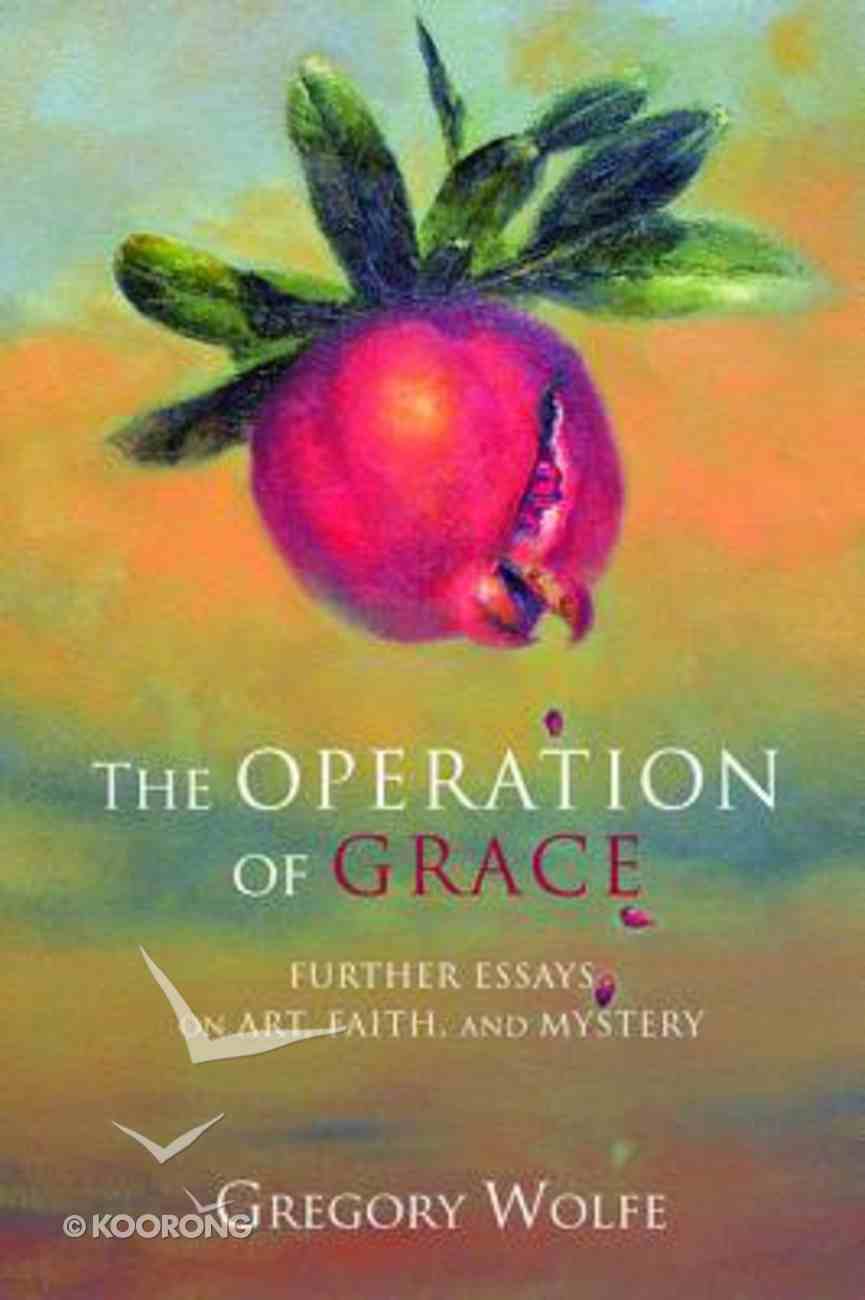 The Operation of Grace

The Operation of Grace collects a decade's worth of essays by Gregory Wolfe taken from the pages of Image, the literary journal he founded more than a quarter century ago. As he notes in the preface, his Image editorials, while...

Available to order. Your order will be printed by our Melbourne Supplier. Not available In-Store
Expected to ship in 3 to 4 weeks from Australia.
Learn More
Free Shipping
for orders over $99.

The Parables of Jesus the Galilean
Ernest Van Eck
eBook

Orientation to the History of Roman Judaea
Steve Mason
eBook

The Operation of Grace collects a decade's worth of essays by Gregory Wolfe taken from the pages of Image, the literary journal he founded more than a quarter century ago. As he notes in the preface, his Image editorials, while they cover a wide range of topics, focus on the intersection of ""art, faith, and mystery."" Wolfe believes that art and religion, while hardly identical, offer illuminating analogies to one another--art deepening faith through the empathetic reach of the imagination and faith anchoring art in a vision beyond the artist's ego. Several essays dwell on how aesthetic values like ambiguity, tragedy, and beauty enlarge our understanding of the spiritual life. There are also a series of reflections that extend Wolfe's campaign to renew the neglected and often misunderstood tradition of Christian humanism. Finally, there are sections that contain more personal meditations arising from Wolfe's involvement in nurturing and promoting the work of emerging writers and artists. The Operation of Grace demonstrates once again why novelist Ron Hansen has spoken of Wolfe as ""one of the most incisive and persuasive voices of our generation."" ""Greg Wolfe has done something very remarkable for both the Christian community and the fractured, fractious culture we inhabit in the North Atlantic world. In his work as editor of the most energizing and imaginative periodical we have in the field of faith and the arts, he has continually reminded us all of why Christianity still draws the attention of the most imaginative spirits, orthodox and not-so-orthodox. These essays amply show how a theologically informed perspective can generate a serious, adult, joyful inhabiting of creation. They go well beyond journalistic polarities and never fail to give fresh light on our condition. A joy and an enrichment."" --Rowan Williams, former archbishop of Canterbury ""Greg Wolfe's essays in Image--the latest batch having been collected here in The Operation of Grace--have a knack for getting the head and the heart in tune. Each of these essays is an invocation--an act of summoning, a preparation for transfigurations yet to come."" --Annie Dillard, Pulitzer Prize-winning author of Pilgrim at Tinker Creek ""It's tempting to read Greg Wolfe as a voice speaking to us from an earlier age, when faith and culture were not antagonists, but two sides to the same coin. This would be a mistake: the humane, intelligent essays in The Operation of Grace exist to remind us that that time isn't past at all."" --Christopher Beha, author of What Happened to Sophie Wilder ""These 'occasional pieces' in fact add up to a marvelous whole--an erudite, provocative whole, at times winsome and at times bracing. They are abundant with wisdom about the pursuit of art, faith, and mystery (our pursuit of them, or, sometimes more properly, their pursuit of us). They are, in short, a gift."" --Lauren F. Winner, author of Girl Meets God and Still ""For over a quarter-century, Gregory Wolfe has been illuminating and fostering the sometimes overlooked but vital matrix upon which religion and art encounter one another, not just as belief and creative work but as a singular manifestation of 'real presence' in which God and beauty body forth as grace. This new collection of essays--wise, acute, and compelling--is a bold and necessary dispatch from an essential writer."" --Robert Clark, author of Mr. White's Confession and Dark Water ""Gregory Wolfe is to the burgeoning art and faith movement what Camille Pissarro was to the Impressionist movement--a central pillar, a wise teacher, an irreplaceable presence. One simply cannot imagine today's art and faith conversation without his voice. Here in The Operation of Grace, his eloquent, challenging writing invites us to a feast--the very feast that Image journal has been serving up for nearly three decades."" --Makoto Fujimura, Artist, Director, Brehm Center Gregory Wolfe is editor of Image, one of America's leading quarte
-Publisher

Gregory Wolfe is founder and editor of Image and director of the MFA in Creative Writing program at Seattle Pacific University. Among his books are Malcolm Muggeridge: A Biography; Bearing the Mystery: Twenty Years of IMAGE (editor) and Sacred Passion: The Art of William Schickel.

All the Messianic Prophecies of the Bible
Herbert Lockyer
Paperback