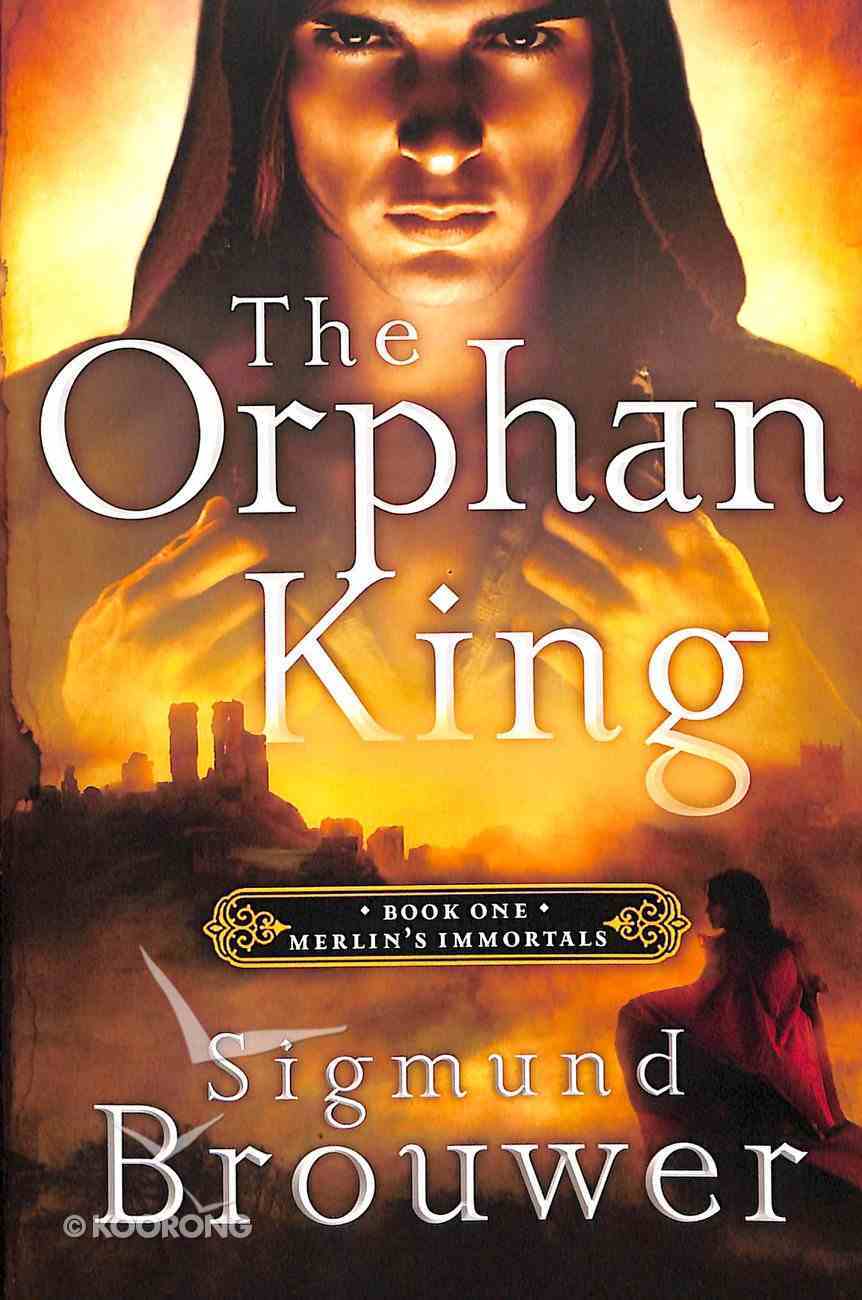 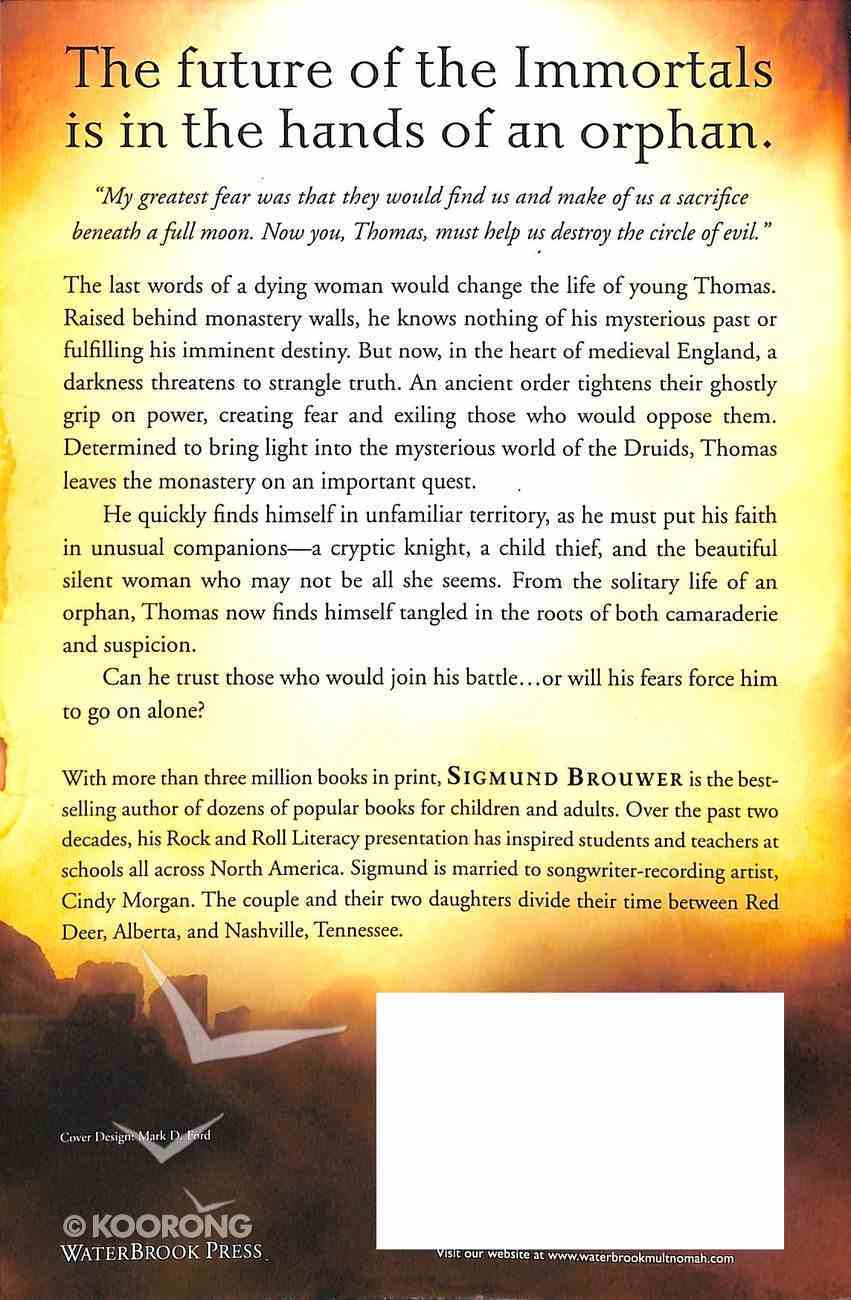 The future of the Immortals is in the hands of an orphan   My greatest fear was that they would find us and make of us a sacrifice beneath a full moon. Now you, Thomas, must help us destroy...

My greatest fear was that they would find us and make of us a sacrifice beneath a full moon. Now you, Thomas, must help us destroy the circle of evil.

The last words of a dying woman would change the life of young Thomas. Raised behind monastery walls, he knows nothing of his mysterious past or imminent destiny. But now, in the heart of medieval England, a darkness threatens to strangle truth. An ancient order tightens their ghostly grip on power, creating fear and exiling those who would oppose them. Thomas is determined fulfill his calling and bring light into the mysterious world of the Druids and leaves the monastery on an important quest.

Thomas quickly finds himself in unfamiliar territory, as he must put his faith in unusual companions—a cryptic knight, a child thief, and the beautiful, silent woman whom may not be all she seems.  From the solitary life of an orphan, Thomas now finds himself tangled in the roots of both comradery and suspicion.

Can he trust those who would join his battle…or will his fears force him to go on alone?
-Publisher

Amidst the shouting and haggling in the crowded and filthy market square, two women appeared to be examining the
quality of spun wool.

Neither was a woman.

And neither cared about the wool.

The men in dresses and shawls and coarse wigs beneath bonnets had chosen this disguise because they could not risk the chance of anyone linking the two of them. It was a minuscule risk, that perhaps one day someone might note first one had gone into a church—or any other meeting place—and then the other. Yet even the slightest risk
was too much.

They each held one end of the spun wool and leaned in close so nobody could overhear a single word.

“You know what the planets and stars tell us about tomorrow morning, don’t you?” the older man said.

“Of course,” the younger answered. “I wonder why we don’t use events like this to our advantage. Think of the power it would give us, making it appear that we control the heavens.”

“That would require revealing that we exist.”

The second man sighed. “Yes. Over the years you’ve made it very clear that the true power is exerting control without letting the person controlled know of it.”

“A thousand years now. Shouldn’t that be—”

“Yes, yes.” The younger man was prone to impatience and prone to showing it. “A thousand years hidden among them. Shouldn’t that be enough indication of the wisdom of our strategy? Is that what you were going to say?”

They paused as a couple of women stepped too close, then resumed as soon as those women had moved on again.

“When I pass on my mantle to you,” the older one said, “and when you choose someone to take your place, you’ll hear yourself repeating much of what I’ve said. Now think. It is significant that tomorrow morning was chosen for the hanging. Why?”

There was a long pause. The second man picked at some bugs in the wool as he thought it through. Then he exclaimed, “The knight is bait!”

“This is why you have been chosen as my successor. You see and understand what others cannot. Yes. I’m sure they want to use the knight to draw him out. Think again. How can we use that to our advantage?”

The younger man didn’t hesitate. “For years, we have been searching for him too. When we find him, we will find what they have stolen from us and given to him.”

“If they find him and use him, it could lead them to what was stolen from us and given to him.”

“Every sword has two edges. We must keep Magnus at all costs. Losing it is the edge of the sword that can wound us. For them, the reward of regaining Magnus puts them in danger from the other edge of the sword. If the knight truly is bait, as we suspect, they must expose themselves as they try to win him to their side. More importantly, if the knight is bait and draws him out, we will have a chance to take him for ourselves.”

“All these years. He is into manhood now.”

“Yes, I expect he will be a formidable opponent. But once he reveals himself, we can use the structure of law to hunt him.”

“And kill him?” the younger asked.

“Unless he will serve us instead. What he possesses is a great prize.”

“To reach him also means exposing ourselves,” the younger one said with a degree of satisfaction, expecting to be praised for this brilliant observation.

“I hope I don’t die soon,” the older man said with mild irony. “What do you mean by that?”

“Because I have so much left to teach you. If we know the knight is bait, don’t you think it’s wise to make sure we have our own bait?”

Still looking down at the spun wool, the older man said, “The knight is not the only one on the gallows tomorrow.”

The younger man’s eyes opened in surprise, then he blinked in comprehension. “So we cannot lose,” he said.