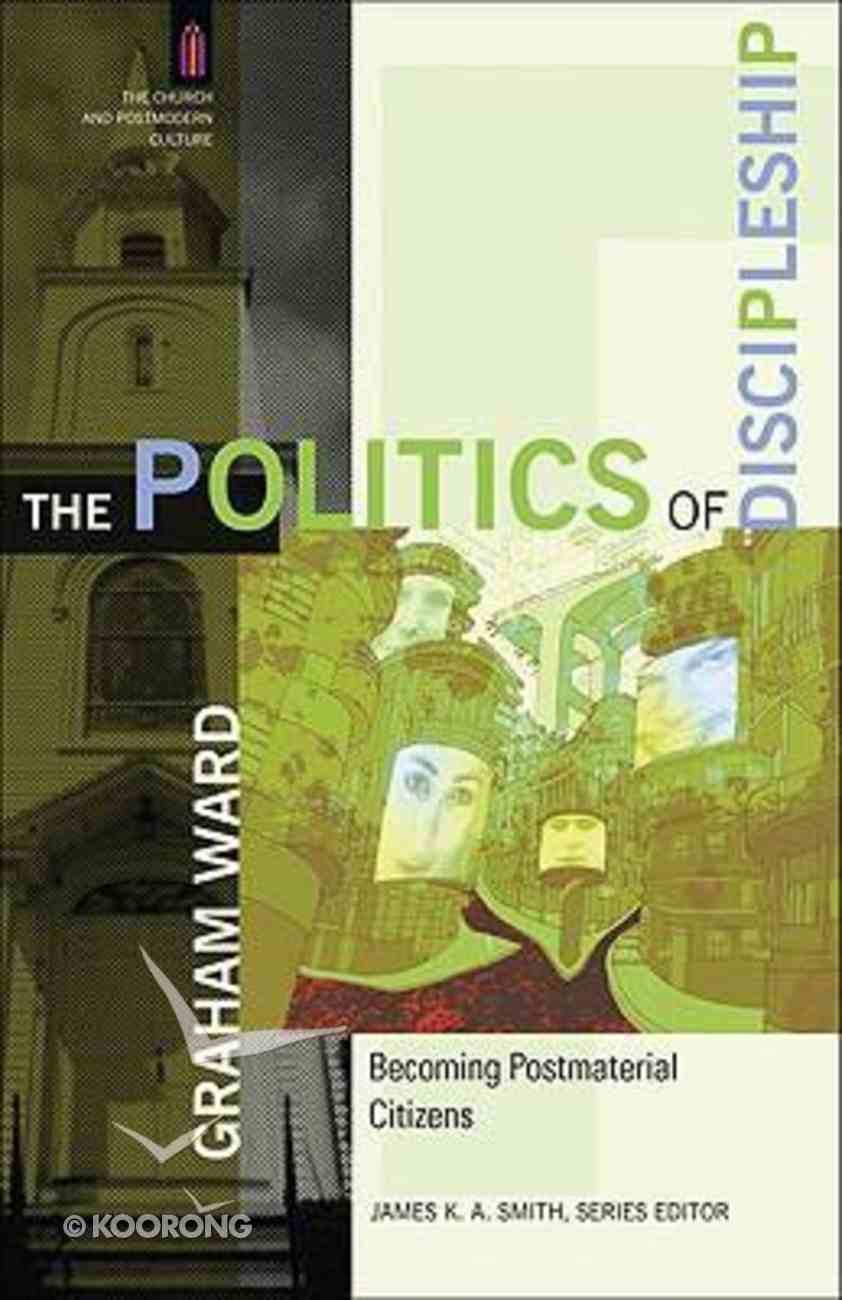 The Politics of Discipleship

In this fourth volume in the Church and Postmodern Culture series, internationally acclaimed theologian Graham Ward examines the political side of postmodernism in order to discern the contemporary context of the church and describe the characteristics of a faithful, political...

In this fourth volume in the Church and Postmodern Culture series, internationally acclaimed theologian Graham Ward examines the political side of postmodernism in order to discern the contemporary context of the church and describe the characteristics of a faithful, political discipleship. His study falls neatly into two sections. The first, which is the more theoretical section, considers "the signs of the times." Ward names this section "The World," noting that the church must always frame its vision and mission within its worldly context. In the second section, "The Church," he turns to constructive application, providing an account of the Christian practices of hope that engage the world from within yet always act as messengers of God's kingdom.
^^Ward's study accomplishes two related goals. First, he provides an accessible guide to contemporary postmodernism and its wide-ranging implications. Second, he elaborates a discipleship that informs a faith seeking understanding, which Ward describes as "the substance of the church's political life."


^^Ward is well known for his thoughtful engagement with postmodernism and contemporary critical theology. Here he provides a broader audience with an engaging account of the inherently political nature of postmodernity and thoughts on what it means to live the Christian faith within that setting.
-Publisher.


Internationally acclaimed theologian Graham Ward is well known for his thoughtful engagement with postmodernism. This volume, the fourth in The Church and Postmodern Culture series, offers an engaging look at the political nature of the postmodern world. In the first section, "The World," Ward considers "the signs of the times" and the political nature of contemporary postmodernism. It is imperative, he suggests, that the church understand the world to be able to address it thoughtfully. In the second section, "The Church," he turns to practical application, examining what faithful discipleship looks like within this political context. Clergy and those interested in the emerging church will find this work particularly thought provoking.
-Publisher

"Extraordinary! Graham Ward''s The Politics of Discipleship is an extraordinary book. Ward does nothing less than help us see how ''world'' and ''church'' implicate each other by providing an insightful and learned account of the transformation of democracy, the perversities of globalization, and the ambiguities of secularization. Perhaps even more significant is his theological proposal for the difference the church can make in the world so described. This is an extraordinary book."--Stanley Hauerwas, Gilbert T. Rowe Professor of Theological Ethics, Duke University"In this book, Graham Ward boldly offers a fresh description of the consumer economy and the processes of globalization, examining the illusions they generate, the states of amnesia they call us into, and the slavery they impose. In the process, he constructs a counter-narrative of a Christian discipleship in the service of postmaterial values that is founded on an eschatological humanism and ecclesiology. The result is a new political theology, powerfully presented, rooted in Scripture and tradition, and fully engaged in reading the postsecular signs of the times."--Peter Manley Scott, senior lecturer in Christian social thought and director of the Lincoln Theological Institute, University of Manchester"For some time now, Graham Ward has blended orthodox theology, biblical study, and cultural theory with an independent originality. Now he has added politics to this mix. The result is simultaneously a greater edge to his own theology and an imbuing of contemporary political theology with more realistic depth and practical prescience than it usually exhibits. An extremely significant volume in the present time."--John Milbank, professor of religion, politics, and ethics, University of Nottingham"With erudition, insight, and sheer imaginative power, Graham Ward examines the complexities and tasks of Christian discipleship in a globalized world. There is no surer guide than Ward to the enticements and dangers of postmodern, postmaterial life--where values themselves have become virtual, adopted for a day--or to the hope of finding the true meaning of our still-present materiality in the practices of church and in the ecclesiality of the body of Christ. Yet Ward''s encyclopedic grasp of political theory; his detailed, often dazzling readings of Scripture; and his profound inhabitation of theology are deployed with a humor and lightness of touch that renders this book both challenging and immensely readable. It is political theology but also a page-turner: impressive, provocative, and impossible to put down."--Gerard Loughlin, professor of theology and religion, Durham UniversityPraise for the series:"The proposed series is not just a good idea; it is actually essential. If mission, liturgy, and pastoral care are to be effective today, then churches need a better understanding of so-called postmodern culture as something to be reckoned with and sometimes resisted. Increasingly, there is an educated interest in religion, but there is also a need to be well-informed about postmodern thought and its very complex relation both to postmodern culture (to which it is often actually hostile) and to religion. Again the need is for a critical appreciation--not dismissal and not empty adulation. This new series aims to provide this in an accessible manner. I am convinced that the main ideas of postmodernism are actually not as ''difficult'' as people suppose and that a clear and simple presentation of them actually assists wider cultural discussion. An additional purpose of the series is to introduce to a wider audience theologies that are already trying critically to assimilate the postmodern turn. Since some of these, for example Radical Orthodoxy, are intensely focused on the importance of ''church,'' it is crucial that this occur. Although it is already happening, it needs to crystallize. This new series may be just the thing to bring it about."--John Milbank, University of Nottingham
-Publisher

Graham Ward is Professor of Contextual Theology and Ethics at the University of Manchester. He is the author of numerous articles published throughout the world on theology, critical theory and literary theory. His previous books include Barth, Derrida and the Language of Theology, Theology and Contemporary Critical Theory, The Postmodern God, Radical Orthodoxy, Balthasar at the End of Modernity, and most recently Politics of Discipleship, The: Becoming Postmaterial Citizens. He is also editor of the journal Literature and Theology.