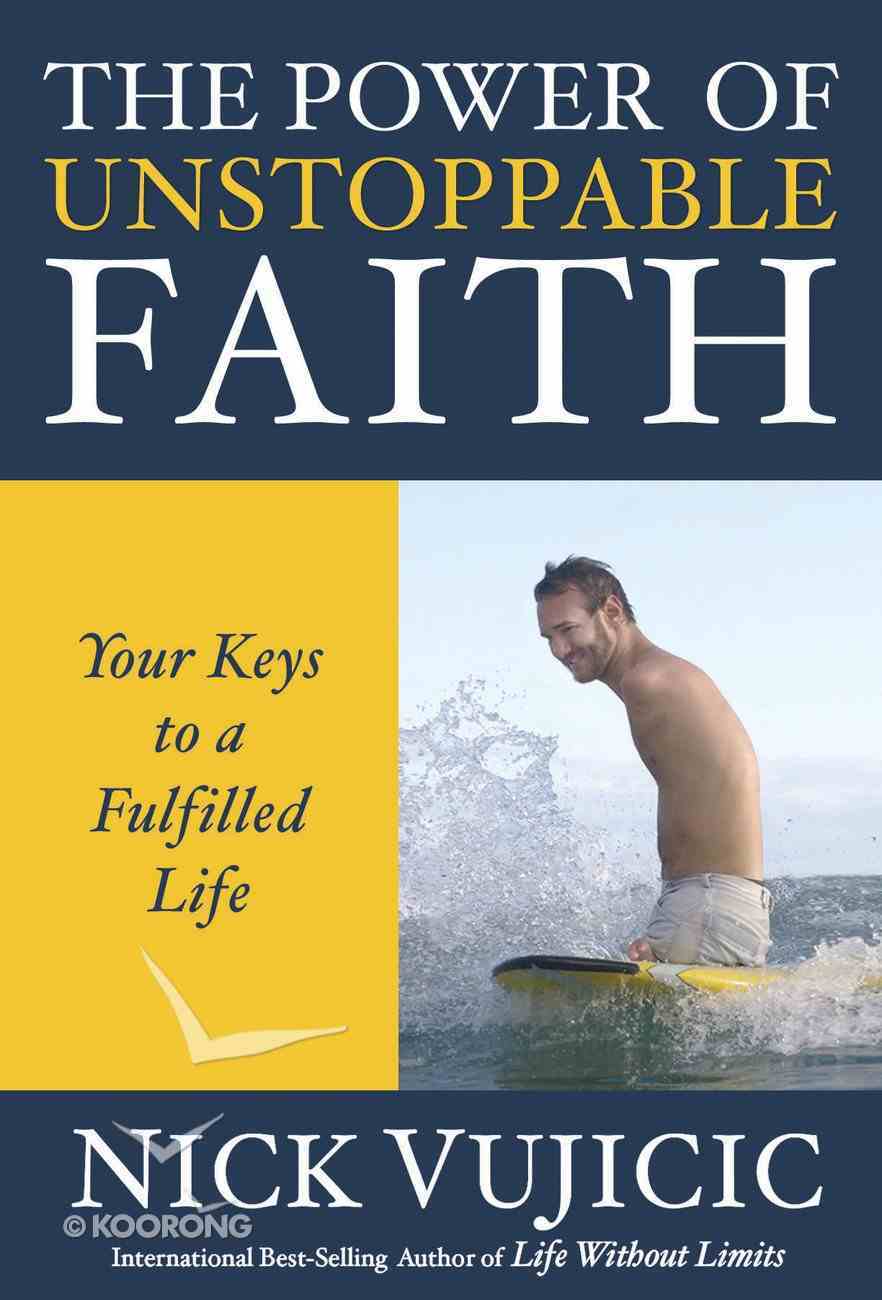 The Power of Unstoppable Fath (10 Pack)

"People often ask me how I stay positive and where I find the strength to overcome my disabilities? My answer, always, is 'I pray for God's help and then exercise unstoppable faith.'" -Nick Vujicic Become Unstoppable Millions around...

29 available
Expected to ship within 13 hours from Australia.
Learn More
Free Shipping
for orders over $99.

You Rise Glorious: A Wild Invitation to Live Fierce, Free, and Unstoppable in a World That Tries to Break You, Shame You, and Tell You That You're Not
Mike Foster, Bob Goff (Fwd)
Paperback

Be the Hands and Feet
Nick Vujicic
eBook

"People often ask me how I stay positive and where I find the strength to overcome my disabilities? My answer, always, is 'I pray for God's help and then exercise unstoppable faith.'" -Nick Vujicic

:"People often ask me how I stay positive and where I find the strength to overcome my disabilities? My answer, always, is 'I pray for God's help and then exercise unstoppable faith.'" -Nick Vujicic

Look for the complete book by Nick Vujicic: Unstoppable: The Incredible Power of Faith in Action
-Publisher

As the cover photograph on this booklet makes most obvious, you can see that I was born without arms or legs, or as my mom has said many times, I was missing a few &ldquo;bits and pieces&rdquo;! What you cannot see from the photo, though, is that my lack of limbs has not kept me from enjoying great adventures, a fulfilling and meaningful career, and loving relationships.

How have I been able to do that? Believe me, it&rsquo;s not because I&rsquo;m some kind of superhero type of person. What I have received by God&rsquo;s grace, though, is faith. And this ability to live with faith is available to everyone.

In this booklet my goal is to share with you what I call the power of unstoppable faith, which has helped me create a ridiculously good life despite my disabilities.

Unstoppable faith is all about both believing and achieving. It&rsquo;s about having faith in yourself, your talents, your purpose, and, most of all, in God&rsquo;s love and His divine plan for your life.

Early Faith
My parents have always been there for me. They did not coddle me. They disciplined me when I needed it and gave me room to make my own mistakes. Most of all, they are wonderful role models.

I was their first child and definitely a surprise package. Despite doing all the usual maternity tests, my mother&rsquo;s doctor detected no indication that I would come into the world with neither arms nor legs. My mother was an experienced nurse who had assisted in hundreds of deliveries, so she took every precaution during her pregnancy.

Needless to say, she and my father were quite stunned that I arrived without limbs. They are devout Christians. In fact, my father was a lay pastor. My parents prayed for guidance while I underwent many days of testing after my birth.

Like all babies, I did not come with an instruction book, but my parents sure would have welcomed a little guidance. They knew of no other parents who&rsquo;d raised a child without limbs in a world designed for people with a complete set.

Mum and Dad were distraught at first, as any parents would be. Anger, guilt, fear, depression, despair&mdash;their emotions ran away with them for the first week or so. Many tears were shed. They grieved for the perfectly formed child they&rsquo;d envisioned but did not receive. They grieved, too, because they feared that my life would be very difficult.

When my parents had exhausted all the medical resources in Australia, they sought help for me in Canada and the United States and anywhere else in the world that offered hope and information. They never did uncover a full medical explanation for my condition, though many theories were offered. My brother, Aaron, and sister, Michelle, were born a few years later with the standard package of limbs, so a genetic defect did not appear to be the problem.

My parents could not imagine what plan God had in mind for such a boy. Yet, once they&rsquo;d recovered from their initial shock, they decided to put their trust in God. They gave up their attempts to understand why God had given them such a child. Instead, they surrendered to His plan, whatever it might be, and then went about raising me as best they could, the only way they could: pouring into me all their love one day at a time.