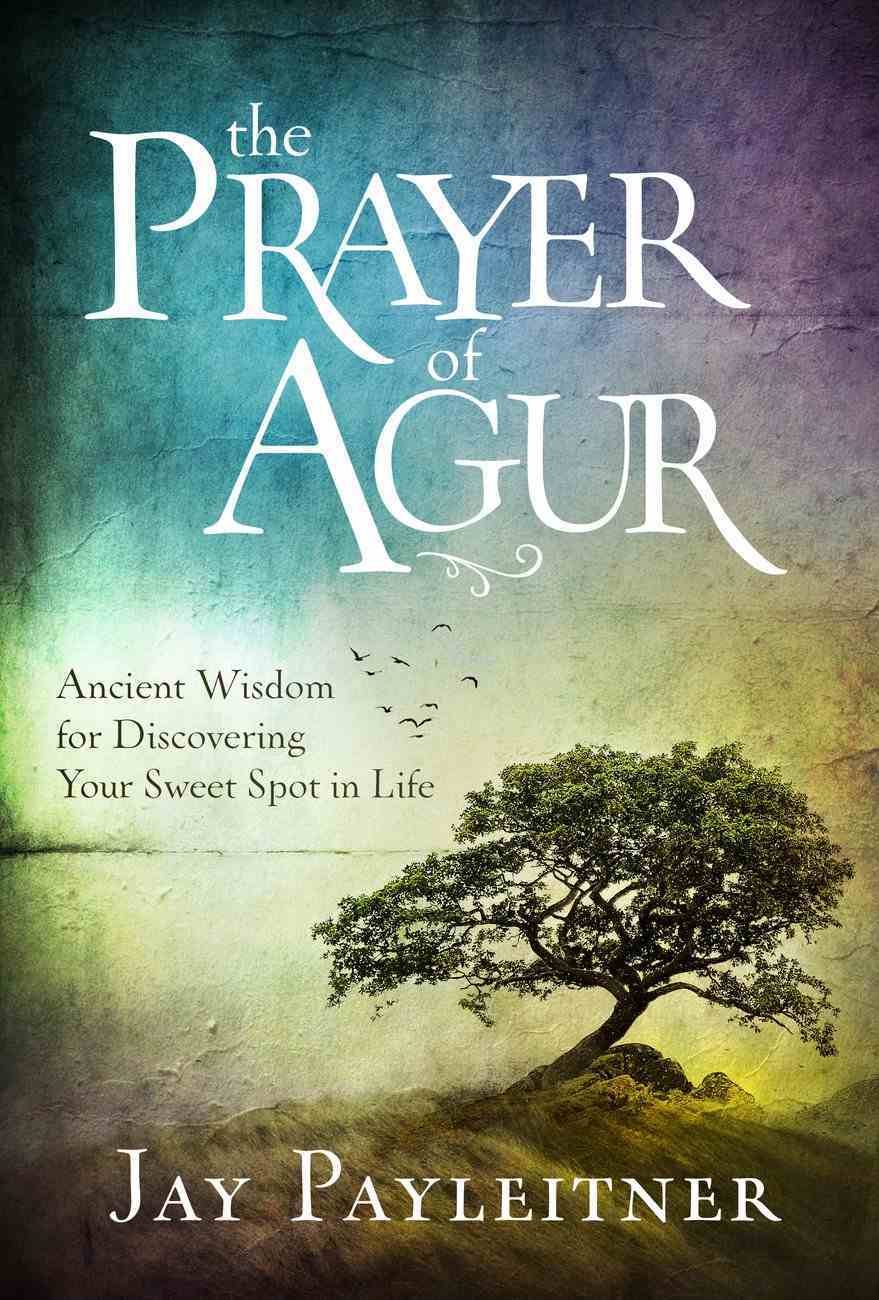 The Prayer of Agur: Ancient Wisdom For Discovering Your Sweet Spot in Life

:Discover a simple prayer with life-changing potential for our hectic times: "Give me neither poverty nor riches, but give me only my daily bread" (Proverbs 30:8). This heartfelt, unexpected request from a little-known biblical author named Agur...

Pre-Order now to secure your copy.

What If God Wrote Your Shopping List?
Jay Payleitner
eBook

What If God Wrote Your Shopping List?: 52 Ways to Find Freedom From "Stuff"
Jay Payleitner
Paperback

The Way Up is Down
Marlena Graves
eBook

:Discover a simple prayer with life-changing potential for our hectic times:
"Give me neither poverty nor riches, but give me only my daily bread" (Proverbs 30:8).

This heartfelt, unexpected request from a little-known biblical author named Agur is the only prayer in all of Proverbs, yet it contains surprising insights for living with purpose and satisfaction.

Life in the twenty-first century is way out of balance, careening between extremes. Too many individuals, families, churches, and communities are trapped by the conflicting desire to live simply or accumulate wealth. So, this humble prayer has larger-than-life implications. We can achieve soul-satisfying equilibrium in our jobs, personal ministry, and relationships. Open your heart to Agur's wit and wisdom and you can learn to

In The Prayer of Agur, best-selling author and radio producer Jay Payleitner faithfully unpacks the wit and wisdom of this Old Testament passage, giving readers insight into how they can find a new perspective on the value of humility, the perks of moderation, and the eternal rewards of trusting God.
-Publisher

JAY K. PAYLEITNER is a freelance writer and radio producer for Josh McDowell Radio, Today's Father, Prime Timers Today, and other nationwide broadcasts. His work has helped send millions of Bibles to China, hundreds of volunteers to Russia, and thousands of Christmas gifts to the children of inmates, with Chuck Colson's "Angel Tree" project. Jay also created the fast-selling America Responds audio series and the very first print ad for Left Behind. Jay and his wife, Rita, have five kids and live in St. Charles, Illinois.


You picked up this small book&mdash;and I wrote it&mdash;because of the allure of a short prayer hidden in plain sight in the book of Proverbs. It reads easily. Speaks honestly. And contains a nice little unexpected twist. Here it is:


Two things I ask of you, Lord;


do not refuse me before I die:


Keep falsehood and lies far from me;


give me neither poverty nor riches,


but give me only my daily bread.


Otherwise, I may have too much and disown you


Or I may become poor and steal,


Read it again. And maybe a third time.


Did you get it? There&rsquo;s a chance you did. Totally. Message received. If that&rsquo;s the case, you can put this book back on the shelf and move on to your next theological brainteaser. For savvy people like you, this passage is fairly straightforward.


I submit there&rsquo;s more to the Prayer of Agur and the surrounding passages than you might imagine. There&rsquo;s quite a bit of subtext and tons of application for today. So before you go, allow me to tease you with a few unexpected observations regarding Agur and his contribution to one of the most quoted books of the Bible.


First, Agur&rsquo;s prayer is the only prayer in all of Proverbs. Considering the many topics covered and the literary devices included in the book of Proverbs, that should come as a bit of a surprise.


Second, while there are hundreds of prophecies in the Old Testament predicting Jesus as the coming Messiah, the chapter written by Agur is one of a handful of times where the idea of Godhaving a son is actually mentioned (see verse 4). It turns out Agur was more than just a guy who wrote commonsense prayers. He was a true prophet.


Third, Agur&rsquo;s short yet powerful prayer is especially applicable today. Too many individuals, families, churches, and communities are trapped in a cycle of self-destructive behavior including lying to ourselves, lying to others, chasing wealth, and fearing poverty. The twenty-first-century life is way out of balance, careening between extremes. Agur is praying desperately to see the big picture and live in that sweet spot of knowing Jesus, knowing He is enough, and knowing He&rsquo;s got a plan for our lives.


Finally, I hope you will stay with me and dig deep into Proverbs 30 in its entirety. All thirty-three verses. The words of Agur could very well leave you with a new perspective on the perks of humility, the dark side of hypocrisy, and the eternal rewards of trusting God. Plus, you also will be invited to ponder how ants can carry so much weight, why lizards sneak into castles, and how snakes slither. Sound like fun?


As promised by the title, this book is mostly about a prayer. But like every prayer, there&rsquo;s a story behind it. That story is well worth uncovering.


Moving forward, we&rsquo;re going to go line by line through this second-to-last chapter of Proverbs and unearth what little we know about this fellow named Agur.


~&#160; First, we&rsquo;ll look at the six verses that build a platform for Agur&rsquo;s prayer.


~&#160; After the prayer, Agur turns the wordplay up a notch by presenting five short, peculiar lists that make the second half of the chapter feel more like a television game show than Scripture.


~&#160; Finally, we&rsquo;ll close with an unexpected bonus that comes with living in God&rsquo;s sweet spot. It&rsquo;s a gift you don&rsquo;t want to miss.


So stick around. This small book delivers a big message. When you&rsquo;ve finished, share it with a few like-minded friends, questioning seekers, or skeptical cynics. See if their impressions and takeaways match yours. Let&rsquo;s get this party started.


What Is a Sweet Spot?


Tennis players know there is a sweet spot on their racket where the ball jumps off the nylon strings with maximum velocity and precision. When that happens, there&rsquo;s no vibration in their hand and the ball travels straight and true.


The same is true of baseball bats and vocal performances. You&rsquo;ll hear players say things like, &ldquo;It was a fast ball down the middle, and it found the sweet spot of my bat.&rdquo; Or vocalists might say, &ldquo;I love that song. It&rsquo;s really in my sweet spot.&rdquo;


Career counselors will describe your sweet spot as the job where your gifts and passions intersect with the needs of the marketplace. In other words, doing what you love, doing it well, and getting paid for it.


Likewise, there is a way God wants you to live. Where you&rsquo;re living with purpose, not futility. Where your senses garner clarity, not chaos. It&rsquo;s not running too fast or too slow. It&rsquo;s not amassing a fortune or living in squalor.


You&rsquo;ll find your sweet spot when you have a sense of belonging because you know God loves you for who you are, not what you do. Sound good?


Major Impact from a Minor Character


Allow me to introduce a man I am quite confident will be a new friend, colleague, and favorite author. His name is Agur. He&rsquo;s smart, funny, and quite perceptive. He loves God. He&rsquo;s streetwise in a good way. And he&rsquo;s not afraid to speak his mind.


Agur recognizes there is much he does not know. But he asks good questions. He will occasionally interrupt himself right in the middle of a stream of thoughtful teaching to deliver a seemingly random but enlightening truth we all need to hear. His writings make for quite a wild ride.


Somehow, Agur&rsquo;s writings made their way into the book of Proverbs. You have to give him credit for that. Three millennia ago there were quite a few word-slingers filling papyrus scrolls with inspired ruminations. Being included in the Old Testament alongside kings, prophets, and other spiritual giants is quite a coup.


Bible scholars agree that Solomon personally wrote or compiled chapters 1 through 29 of Proverbs. But how and why the last two chapters were tacked on is a bit of a mystery. No one disputes their relevance or authenticity, but very little is known about the authors.


We do know that Lemuel, author of chapter 31, was a king who received wise teaching from his mother. King Lemuel&rsquo;s celebrated description in verses 10&ndash;31 of a &ldquo;wife of noble character&rdquo; has helped keep that last chapter of Proverbs in the limelight. The &ldquo;Proverbs 31 woman&rdquo; is a popular theme at women&rsquo;s events.


Even less is known about Agur, author of chapter 30. As indicated in the opening words of the chapter, he was the son of Jakeh, another obscure reference, and he may have been from northern Arabia.1 That&rsquo;s all the history we have. I suspect most readers of the Bible have never spent more than a moment considering his name, his reputation, or his single puzzling appearance in Scripture. Actually, that&rsquo;s not unusual. There are quite a few historical characters who show up for a single scene or have only the briefest mention in the Bible but still leave a memorable impression. To prove the point, let&rsquo;s take a quick look at three of them.


There&rsquo;s Simeon, the aging prophet who met Mary and Joseph at the temple in Jerusalem when they presented Jesus soon after the fortieth day following His birth. The Holy Spirit had promised Simeon he would not die before seeing the Messiah. Taking the infant in his arms, the old man prophesied that Jesus would be a light to the world, causing the fall and rise of many people. His memorable story takes up a mere eleven verses in Luke 2.


The name Jochebed is mentioned only twice&mdash;both times in long genealogies. But we could make the case that her actionslaunched biblical history. The mother of three heroes of the faith&mdash;Moses, Aaron, and Miriam&mdash;Jochebed had the foresight and courage to send three-month-old Moses floating down the Nile in a papyrus basket to rescue him from Egyptian death squads (see Exodus 1&ndash;2). We may not remember her name, but she should be revered as a beacon of hope for anyone living under oppression and for mothers who love their children enough to let them go.


A third unforgettable biblical character mentioned ever so briefly is the repentant thief on the cross. On that history-changing Friday at Golgotha, one criminal hurled abusive taunts at Jesus, but the other recognized the divinity of Christ and confessed his own brokenness. We don&rsquo;t know his name, but that thief&rsquo;s insight at the triple crucifixion brings hope to those who come to Christ late in life, even in their final moments. In addition, Jesus&rsquo;s promise to the thief, &ldquo;Truly I tell you, today you will be with me in paradise&rdquo; (Luke 23:43), suggests there is no lag time between our time on earth and our entrance into heaven. That&rsquo;s good to know.


It&rsquo;s also good to know that modest lives like yours and mine can still make an impact. Can you identify with a guy who was moved to tears when he held a new baby, a mother who saw a great leader when she looked at her infant son, or someone whose eyes were opened upon meeting Jesus for the first time? Like Agur, these were real people. Simeon, Jochebed, and the thief on the cross were simply doing life.