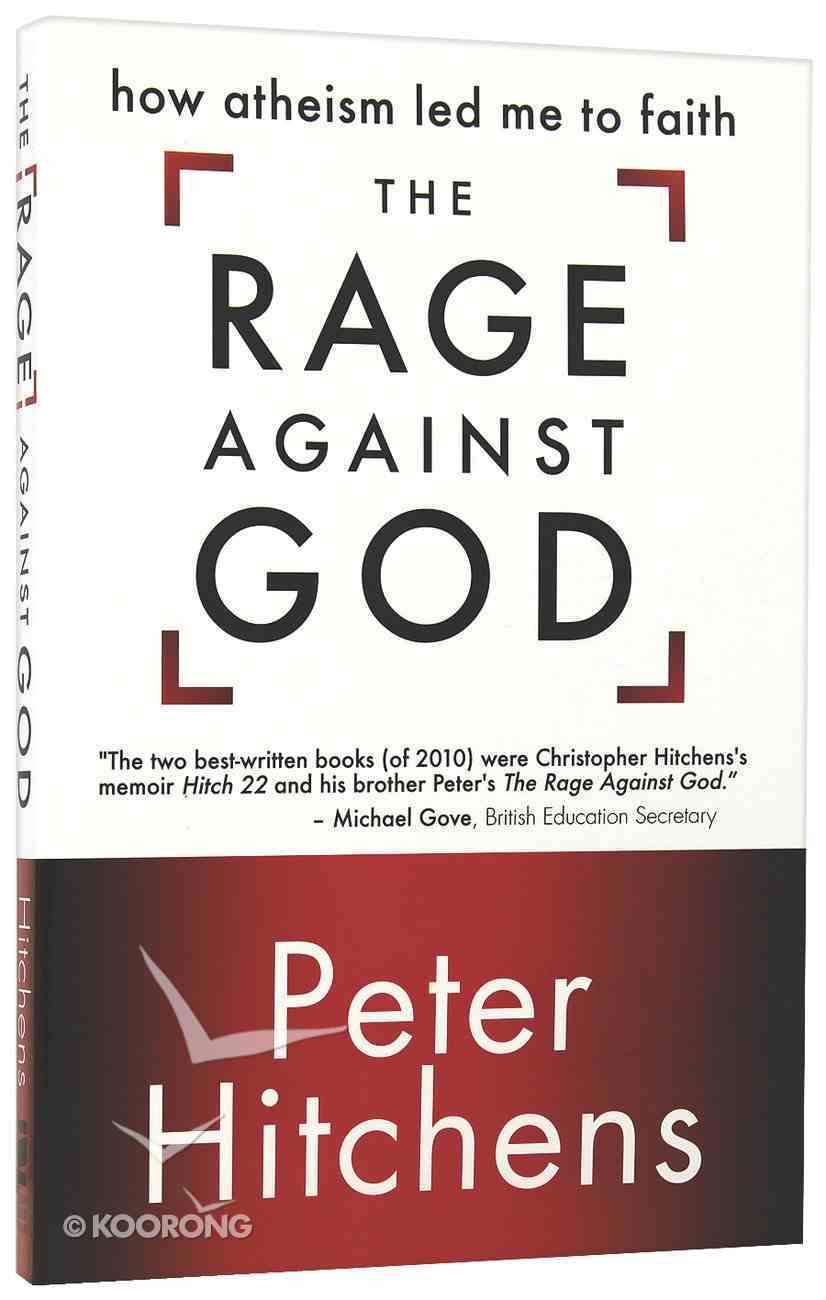 The Rage Against God

Here, for the first time, in his new book The Rage Against God , Peter Hitchens, brother of prominent atheist Christopher Hitchens, chronicles his personal journey through disbelief into a committed Christian faith. With unflinching openness and intellectual honesty, Hitchens...

The Rage Against God: How Atheism Led Me to Faith
Peter Hitchens
eBook

Why I Still Believe: A Former Atheist's Reckoning With the Bad Reputation Christians Give a Good God
Mary Jo Sharp
Paperback

Inside the Atheist Mind: Unmasking the Religion of Those Who Say There is No God
Anthony Destefano
Hardback

Here, for the first time, in his new book The Rage Against God, Peter Hitchens, brother of prominent atheist Christopher Hitchens, chronicles his personal journey through disbelief into a committed Christian faith. With unflinching openness and intellectual honesty, Hitchens describes the personal loss and philosophical curiosity that led him to burn his Bible at prep school and embrace atheism in its place. From there, he traces his experience as a journalist in Soviet Moscow, and the critical observations that left him with more questions than answers, and more despair than hope for how to live a meaningful life.

With first-hand insight into the blurring of the line between politics and the Church, Hitchens reveals the reasons why an honest assessment of Atheism cannot sustain disbelief in God. In the process, he provides hope for all believers who, in the words of T. S. Eliot, may discover "the end of all our exploring will be to arrive where we started and know the place for the first time."
- Publisher

Partly autobiographical, partly historical, The Rage Against God, written by Peter Hitchens, brother of prominent atheist Christopher Hitchens, assails several of the favorite arguments of the anti-God battalions and makes the case against fashionable atheism.
-Publisher

What if notorious atheist Christopher Hitchens, bestselling author of God Is Not Great, had a Christian brother? He does. Peter Hitchens details a very personal story of how he left the faith but dramatically returned. And like many of the Old Testament saints whose personal lives were intertwined with the life of their nation, so Peter's story is also the story of modern England and its sad spiritual decline. Peter brings his work as an international journalist to bear as he documents firsthand accounts of atheistic societies, specifically in Communist Russia, where he lived in Moscow during the collapse of the Soviet Union. He shows that the world's bloodiest century, the 20th, entailed nothing short of atheism's own version of the Crusades and the Inquisition. The path to a secular utopia, pursued by numerous modern tyrants, is truly paved with more violence than has been witnessed in any era in history. Hitchens provides hope for all believers whose friends or family members have left Christianity or who are enchanted by the arguments of the anti-religious intellects of our age.
-Publisher

Peter Hitchens is a British journalist, author, and broadcaster. He currently writes for the Mail on Sunday, where he is a columnist and occasional foreign correspondent, reporting most recently from Iran, North Korea, Burma, The Congo, and China.


A former revolutionary, he attributes his return to faith largely to his experience of socialism in practice, which he witnessed during his many years reporting in Eastern Europe and his nearly three years as a resident correspondent in Moscow during the collapse of the Soviet Union. He lived and worked in the United States from 1993 to 1995. Hitchens lives in Oxford with his wife, Eve. They have three children and has recently authored The Rage Against God: How Atheism Led Me to Faith

The Rage Against God: How Atheism Led Me to Faith
Peter Hitchens
Hardback

The Rage Against God: How Atheism Led Me to Faith
Peter Hitchens
eBook