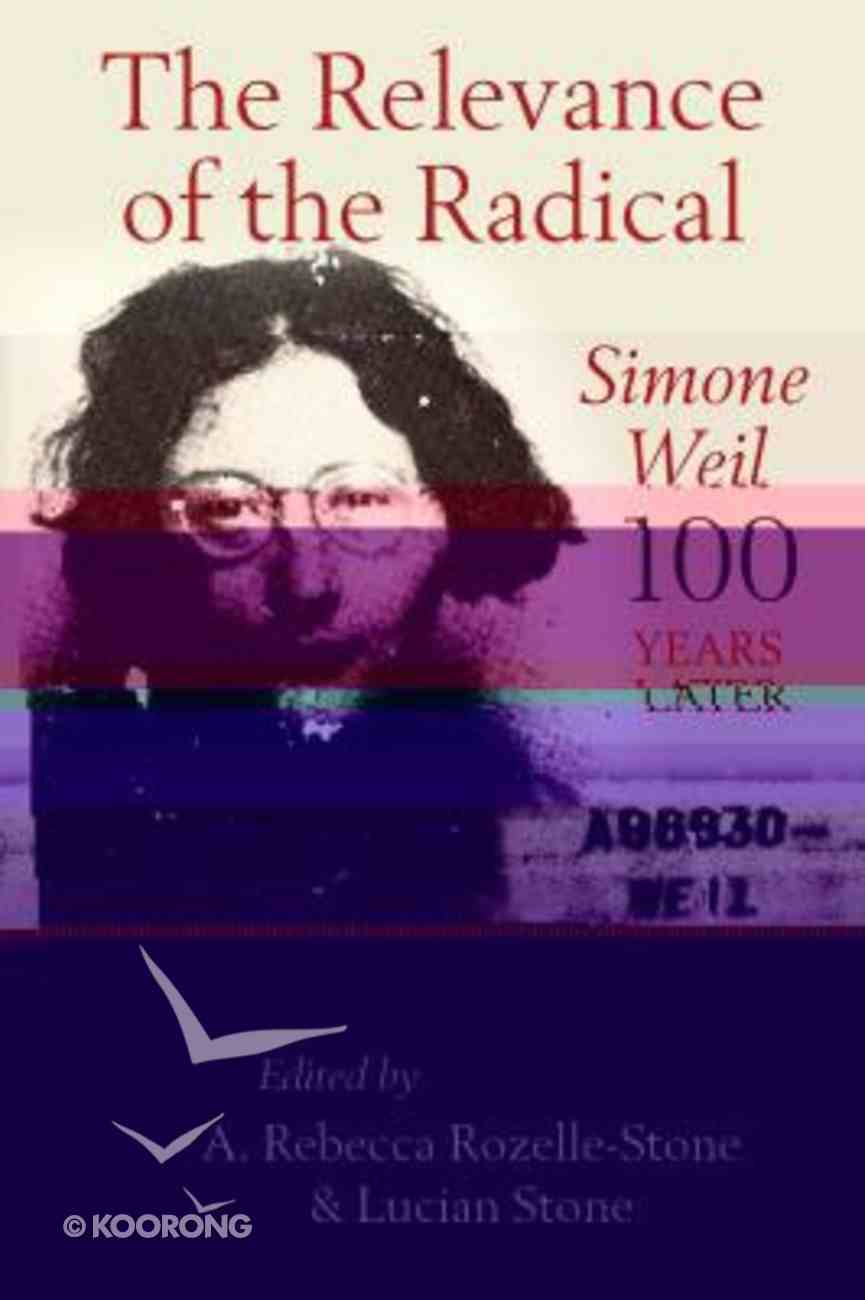 The Relevance of the Radical

In the early 1940s, Simone Weil (1909-1943) wrote that "the glossy surface" of her civilization hid "a real intellectual decadence." There is also good reason to think that the 21st century has ushered in new extremes of intellectual and aesthetic...

The Logic of the Heart
James R Peters
eBook

The Sense of the Universe
Alexei V Nesteruk
eBook

On the Edge: A-Way With the Ocean
Jan Morgan, Graeme Garrett
Paperback

The Real Scandal of the Evangelical Mind
Carl Trueman
eBook

In the early 1940s, Simone Weil (1909-1943) wrote that "the glossy surface" of her civilization hid "a real intellectual decadence." There is also good reason to think that the 21st century has ushered in new extremes of intellectual and aesthetic impoverishment. 2009 will mark the centennial of the birth of this late French activist, philosopher, and mystic, and her life and words are arguably more urgent now than ever before.
^^While Weil's ideas are impossible to separate from her praxis, the first section of the book will analyze the "radical orientation" suggested in her writings. Contributors in this section will address the relevance of her religious ideas, the "irrelevant," the posture of attentiveness and "looking," and the roles of erotic exemplarity and mystery. The second section will examine the "radical world" that follows from the orientation described and will consider themes like violence, power, resistance, responsibility, feminism, liberation theology, science, technology, propaganda, and political hegemony.


^^Through the revolutionary insights of this remarkable woman, then, the contributors propose a framework for understanding and creating a more just world, one that challenges Western philosophy's metaphysical, epistemological, and ethical assumptions which have led to pervasive forms of uprootedness, or what Weil calls dracinement. This framework centres on a notion of absolute selflessness and humility, and is radical both in the sense of being "unconventional" and in the sense of the Latin radicalis, "returning to essential roots." Becoming rooted in reality and centred in what is essential, especially in our context characterized by over-consumption and "virtual reality," is unconventional. How much more, then, is the radical absolutely relevant and Simone Weil the paradigm for effective socio-political redress.

A collection of essays examinaing the life and words of Simone Weil, the late French activist, philosopher, and mystic.
>
-Publisher

A. Rebecca Rozelle-Stone (Ph.D., Southern Illinois University Carbondale) is Assistant Professor of Philosophy at Southern Illinois University Edwardsville. Dr. Rozelle-Stones research interests lie in the intersections of ethical theory and religious thought, as well as in feminist philosophy, philosophy of education, and contemporary Continental thought.
She has co-edited and contributed to The Relevance of the Radical: Simone Weil 100 Years Later (Continuum, 2009).


Aside from Weil, Dr. Rozelle-Stone often engages with the thought of Hannah Arendt, Emmanuel Levinas, Paulo Freire, and Luce Irigaray, especially in investigating different ideas of interpersonal and civic relationships and how these lend themselves to or disable systems of oppression. In addition, she sometimes returns to the social/political thought of American philosophers like John Dewey and Jane Addams, which helped to constitute her early education in philosophy.