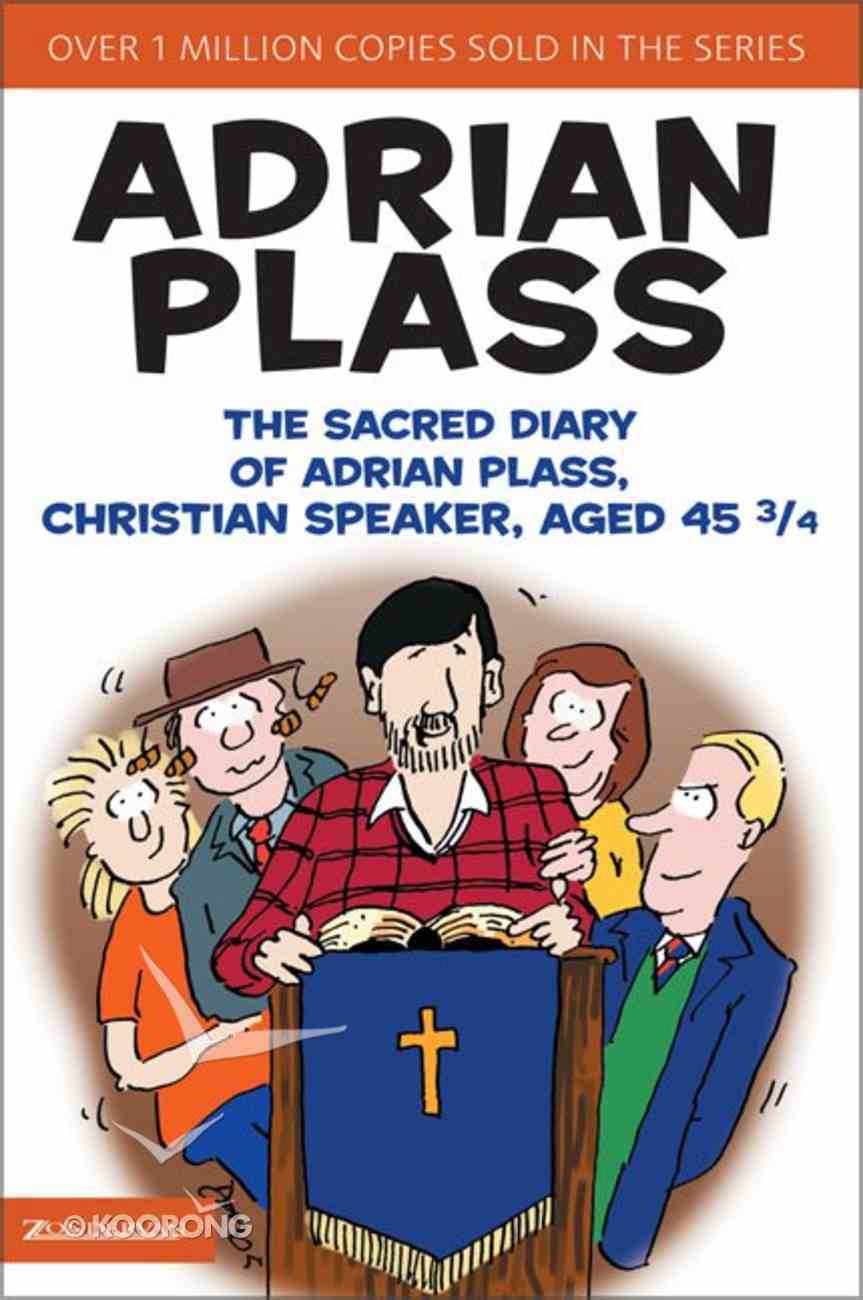 The Sacred Diary of Adrian Plass, Christian Speaker, Aged 453/4Copyright 1996 by Adrian PlassIllustrations copyright 1996 by Dan DonovanFirst published in Great Britain in 1996 by HarperCollinsPublishers.This edition published in 2005 by Zondervan.Requests for information should be addressed to:Zondervan, Grand Rapids, Michigan 49530Adrian Plass and Dan Donovan assert the moral right to be identified as the authorand illustrator of this work.ISBN-10: 0-310-26913-XISBN-13: 978-0-310-26913-7A catalogue record for this book is available from the British Library.All rights reserved. No part of this publication may be reproduced, stored in aretrieval system, or transmitted in any form or by any means - electronic, mechanical,photocopy, recording, or any other - except for brief quotations in printedreviews, without the prior permission of the publisher.Interior design by Nancy WilsonPrinted in the United States of America05 06 07 08 09 10 11 12 /?DCI/ 15 14 13 12 11 10 9 8 7 6 5 4 3 2 1Monday 31 JanGot a bit distracted in church during the message yesterday.Very clever visiting speaker. So clever that I hadn''t got the faintestidea what he was talking about.Suddenly said very loudly near the beginning of his talk, ''Whowill stand and declare the Lord''s displeasure with churches thatare unrepentantly cleistogamic?''Richard Cook, who was sitting next to me, leapt to his feet andsaid, ''Indeed, Lord, we rebuke and we stand against those cleistogamictendencies that exist in our church!''When he sat down I leaned over and whispered in his ear,''What does cleistogamic mean?''He whispered back, ''I don''t know.''Honestly!Decided, as the talk droned on, to start up a diary again, justfor a while, so that I can record some of my experiences connectedwith being a Christian speaker. Lots of invitations for thenext three months, and as I have to use up oceans of leave beforethe end of the financial year, I''ll be able to do quite a lot of them.Unbelievable the way it''s all taken off. Started with beinginvited by local churches to read bits from what I''d written, butover the last couple of years I''ve been all over the country. I dospeak a bit as well as doing the readings now. Anne says it soundsall right when the things I say are true, but that when they''re notI sound like a pompous git - I think that''s the expression she used.Her ministry of encouragement is subtle and special.Diary - A. PlassSeems hardly possible that my three books about people inour church have been read by so many people. Glad Gerald persuadedme to send my first diary off to a publisher, although itwas a bit of a shock to find what was supposed to be a serious,helpful account of daily Christian living, being described by criticsas a ''searing satire on the modern church''. Slightly gallingalso to find some of my important personal spiritual insightsbeing labelled as ''ludicrous modern religious attitudes, hilariouslycaricatured''.Still, if they say it''s searing satire I suppose it might be. At leastI''ve mastered the process now - all I have to do is write seriouslyand everyone laughs their heads off. Really hope this book willend up being used as a sort of serious textbook for Christianspeakers, but after seeing what happened to the first one Iwouldn''t be surprised if it became regarded as a major influencein the field of begonia culture.We shall see . . .Must look up ''cleistogamic'' in the dictionary.Tuesday 1 FebDecided this morning that I ought to have one of those supportgroups that lots of other Christian speakers have. The moreI pictured it the more I liked it. I would be God''s chosen vehicle,powerful and mantled with authority in public, yet restrained andfull of grace in private, opening myself up in humble submissionto the ministrations, advice and criticism of a little group of folkwho would feel privileged and proud to be part of what God wasdoing through me.Mentioned the idea to Anne and Gerald over breakfast.''The thing is,'' I said, ''that I''d submit myself to their advice
-Publisher

Adrian Plass lovers got their initial baptism of laughter through his bestseller, The Sacred Diary of Adrian Plass (aged 37 3/4). The author's account of 'serious spiritual experiences' naturally made him in demand as a public speaker -- so of course another diary was inevitable. The Sacred Diary of Adrian Plass, Christian Speaker (aged 45 3/4) continues the misadventures of Adrian's fictional alter-ego. As Plass gathers regularly with his support group, we meet old friends, including his longsuffering wife, Anne; son Gerald, now grown but no less irrepressible; loony and loveable Leonard Thynn; Edwin, the wise church elder; and Richard and Doreen Cook, who are just as religious as ever. We also meet some new characters, such as Stephanie Widgeon, who only seems to have one thing to say, ever. . . and who knows, we might even find out why Leonard Thynn borrowed Adrian's cat all those years ago. And finally -- what is a banner ripping seminar?
-Publisher