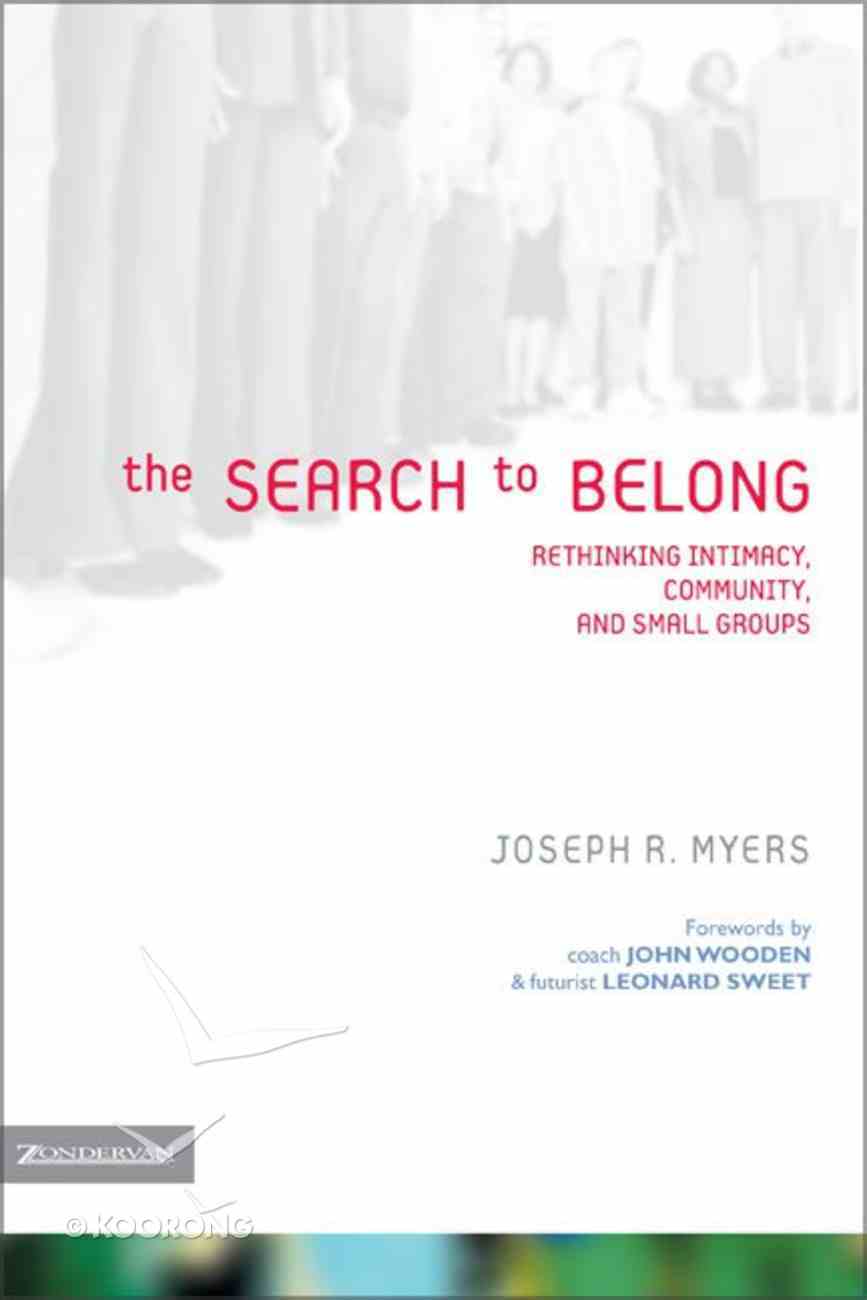 The Search to Belong

A practical guide for those struggling to build a community of believers in a culture that wants to experience belonging over believingWho is my neighbor? Who belongs to me? To whom do I belong? These are timeless questions that guide...

Feels Like Home: How Rediscovering the Church as Family Changes Everything
Lee Eclov
Paperback

A practical guide for those struggling to build a community of believers in a culture that wants to experience belonging over believingWho is my neighbor? Who belongs to me? To whom do I belong? These are timeless questions that guide the church to its fundamental calling. Today terms like neighbor, family, and congregation are being redefined. People are searching to belong in new places and experiences. The church needs to adapt its interpretations, definitions, and language to make sense in the changing culture.This book equips congregations and church leaders with tools to: - Discern the key ingredients people look for in community- Understand the use of space as a key element for experiencing belonging and community- Develop the "chemical compound" that produces an environment for community to spontaneously emerge- Discover how language promotes specific spatial belonging and then use this knowledge to build an effective vocabulary for community development- Create an assessment
-Publisher

The Search to Belong: Rethinking Intimacy, Community, and Small Groups Copyright 2003 by Joseph R. Myers Youth Specialties products, 300 South Pierce Street, El Cajon, CA 92020, are published by Zondervan, 5300 Patterson Avenue, Southeast, Grand Rapids, MI 49530 Library of Congress Cataloging-in-Publication Data Myers, Joseph R., 1962- The search to belong : rethinking intimacy, community, and small groups / Joseph R. Myers. p. cm. ISBN-10: 0-310-25500-7 (pbk.) ISBN-13: 978-0-310-25500-0 (pbk.) 1. Community--Religious aspects--Christianity. 2. Small groups--Religious aspects--Christianity. 3. Intimacy (Psychology)--Religious aspects--Christianity. I. Title. BV4517.5.M94 2003 262'.2--dc21 2003005789 Unless otherwise indicated, all Scripture quotations are taken from the Holy Bible: New International Version (North American Edition). Copyright 1973, 1978, 1984 by International Bible Society. Used by permission of Zondervan. All rights reserved. No part of this publication may be reproduced, stored in a retrieval system, or transmitted in any form or by any means-electronic, mechanical, photocopy, recording, or any other-except for brief quotations in printed reviews, without the prior permission of the publisher. Web site addresses listed in this book were current at the time of publication. Please contact Youth Specialties via e-mail (YS@YouthSpecialties.com) to report URLs that are no longer operational and replacement URLs if available. Some of the anecdotal illustrations in this book are true and are included with the permission of the persons involved. All other illustrations are composites of true situations, and any resemblance to people living or dead is coincidental. Edited by Randy Frame Cover and interior design by Electricurrent Cover photo by Michael Wilson Printed in the United States of America the myths of belonging Our old ideas about space have exploded.The past three decades have produced more change in more cultures than any other time in history. Radically accelerated growth, deregulation, and globalization have redrawn our familiar maps and reset the parameters: Borders are inscribed and permeated, control zones imposed and violated, jurisdictions declared and ignored, markets pumped up and punctured.And at the same time, entirely new spatial conditions, demanding new definitions, have emerged.Where space was considered permanent, it now feels transitory-on its way to becoming.The words and ideas of architecture, once the official language of space, no longer seem capable of describing this proliferation of new conditions. But even as its utility is questioned in the real world, architectural language survives, its repertoire of concepts and metaphors resurrected to create clarity and definition in new, unfamiliar domains (think chat rooms,Web sites, and firewalls).Words that die in the real are reborn in the virtual.1 Rem Koolhaas, in a guest editorial for a special issue of Wired Wen our pastor rose to make the announcement, I suspected we were in for it again. "We're going to be a church of small groups," he told us, like a child pleading for his parents to read from the well-worn book one more time. "A church of small groups instead of a church with small groups." My heart sank. Been there; done that. I remembered attending a small group several years earlier. It was the next step in my process of growing deeper in Christ and in community. "Everyone in a small group" was the church-wide goal. So my wife, Sara, and I hopped in our car and began our eight-week commitment. We were greeted kindly at the door. It was not so much a friendship sort of kind as it was a salesman's type. "This is the first time," I told myself, "so relax and enjoy."
-Publisher

Joseph R. Myers is a multiprenuer, interventionist, and thinker. He is a founding partner of a communication arts group, SETTINGPACE, and owns a consulting firm, FrontPorch, which specializes in creating conversations that promote and develop community.

The Post-Quarantine Church: Six Urgent Challenges + Opportunities That Will Determine the Future of Your Congregation
Thom S Rainer
Hardback

Disability and the Church: A Vision For Diversity and Inclusion
Lamar Hardwick
Paperback