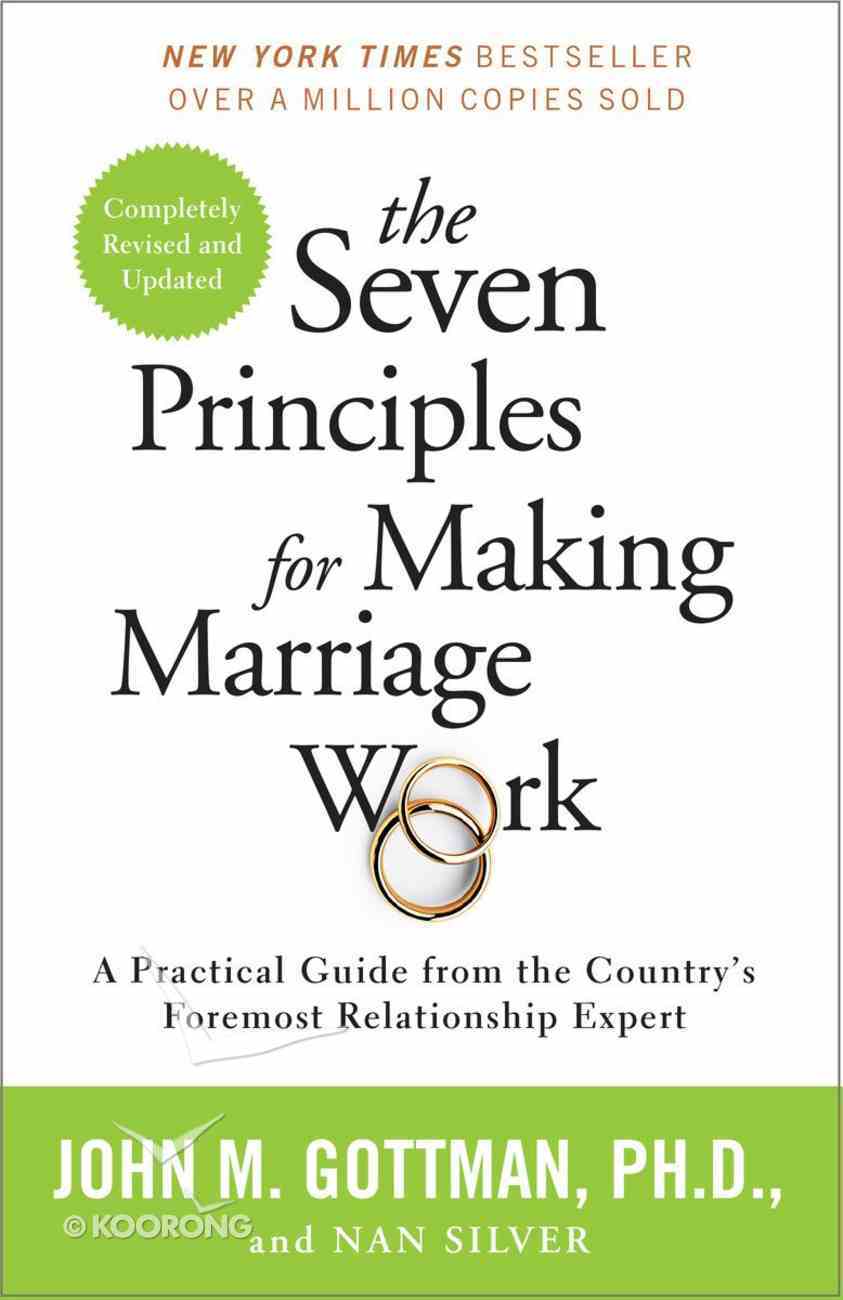 : With more than a million copies sold worldwide, The Seven Principles for Making Marriage Work has revolutionized the way we understand, repair, and strengthen marriages. John Gottman's unprecedented study of couples over a period of years has allowed him...

10 Choices For a Better Marriage: How to Work Through Struggles and Increase Joy Today
Ron Welch
Paperback

:
With more than a million copies sold worldwide, The Seven Principles for Making Marriage Work has revolutionized the way we understand, repair, and strengthen marriages. John Gottman's unprecedented study of couples over a period of years has allowed him to observe the habits that can make-and break-a marriage. Here is the culmination of that work: the seven principles that guide couples on a path toward a harmonious and long-lasting relationship. Straightforward yet profound, these principles teach partners new approaches for resolving conflicts, creating new common ground, and achieving greater levels of intimacy. Gottman offers strategies and resources to help couples collaborate more effectively to resolve any problem, whether dealing with issues related to sex, money, religion, work, family, or anything else.
Packed with new exercises and the latest research out of the esteemed Gottman Institute, this revised edition of The Seven Principles for Making Marriage Work is the definitive guide for anyone who wants their relationship to attain its highest potential.

Nan Silver is the former editor-in-chief of "Health" magazine and coauthor, with John Gottman, of "The Seven Principles for Making Marriage Work" and "Why Marriages Succeed or Fail".

John Gottman, Ph.D, 56, is the founder director of the Seattle Marital and Family Institute and Professor of Psychology at the University of Washington. Co-author, Nan Silver, is a writer living in New York

Inside the Seattle Love Lab: The Truth about Happy Marriages
It's a surprisingly cloudless Seattle morning as newlyweds Mark and Janice Gordon sit down to breakfast. Outside the apartment's picture window, the waters of Montlake cut a deep-blue swath, while runners jog and geese waddle along the lakeside park. Mark and Janice are enjoying the view as they munch on their French toast and share the Sunday paper. Later Mark will probably switch on the football game while Janice chats over the phone with her mom in St. Louis.
&#160;&#160;&#160;&#160;&#160;&#160;&#160;&#160;
All seems ordinary enough inside this studio apartment--until you notice the three video cameras bolted to the wall, the microphones clipped talk-show style to Mark's and Janice's collars, and the Holter monitors strapped around their chests. Mark and Janice's lovely studio with a view is really not their apartment at all. It's a laboratory at the University of Washington in Seattle, where for sixteen years I have spearheaded the most extensive and innovative research ever into marriage and divorce.
&#160;&#160;&#160;&#160;&#160;&#160;&#160;&#160;
As part of one of these studies, Mark and Janice (as well as forty-nine other randomly selected couples) volunteered to stay overnight in our fabricated apartment, affectionately known as the Love Lab. Their instructions were to act as naturally as possible, despite my team of scientists observing them from behind the one-way kitchen mirror, the cameras recording their every word and facial expression, and the sensors tracking bodily signs of stress or relaxation, such as how quickly their hearts pound. (To preserve basic privacy, the couples were monitored only from nine a.m. to nine p.m. and never while in the bathroom.) The apartment comes equipped with a fold-out sofa, a working kitchen, a phone, TV, VCR, and CD player. Couples were told to bring their groceries, their newspapers, their laptops, needlepoint, hand weights, even their pets--whatever they would need to experience a typical weekend.
&#160;&#160;&#160;&#160;&#160;&#160;&#160;&#160;
My goal has been nothing more ambitious than to uncover the truth about marriage--to finally answer the questions that have puzzled people for so long: Why is marriage so tough at times? Why do some lifelong relationships click, while others just tick away like a time bomb? And how can you prevent a marriage from going bad--or rescue one that already has?

Predicting Divorce with 91 Percent Accuracy
After years of research I can finally answer these questions. In fact, I am now able to predict whether a couple will stay happily together or lose their way. I can make this prediction after listening to the couple interact in our Love Lab for as little as five minutes! My accuracy rate in these predictions averages 91 percent over three separate studies. In other words, in 91 percent of the cases where I have predicted that a couple's marriage would eventually fail or succeed, time has proven me right. These predictions are not based on my intuition or preconceived notions of what marriage &quot;should&quot; be, but on the data I've accumulated over years of study.
&#160;&#160;&#160;&#160;&#160;&#160;&#160;&#160;
At first you might be tempted to shrug off my research results as just another in a long line of newfangled theories. It's certainly easy to be cynical when someone tells you they've figured out what really makes marriages last and can show you how to rescue or divorce-proof your own. Plenty of people consider themselves to be experts on marriage--and are more than happy to give you their opinion of how to form a more perfect union.
&#160;&#160;&#160;&#160;&#160;&#160;&#160;&#160;
But that's the key word--opinion. Before the breakthroughs my research provided, point of view was pretty much all that anyone trying to help couples had to go on. And that includes just about every qualified, talented, and well-trained marriage counselor out there. Usually a responsible therapist's approach to helping couples is based on his or her professional training and experience, intuition, family history, perhaps even religious conviction. But the one thing it's not based on is hard scientific evidence. Because until now there really hasn't been any rigorous scientific data about why some marriages succeed and others flop.
&#160;&#160;&#160;&#160;&#160;&#160;&#160;&#160;
For all of the attention my ability to predict divorce has earned me, the most rewarding findings to come out of my studies are the Seven Principles that will prevent a marriage from breaking up.

Emotionally Intelligent Marriages
What can make a marriage work is surprisingly simple. Happily married couples aren't smarter, richer, or more psychologically astute than others. But in their day-to-day lives, they have hit upon a dynamic that keeps their negative thoughts and feelings about each other (which all couples have) from overwhelming their positive ones. They have what I call an emotionally intelligent marriage.

I can predict whether a couple will divorce after watching and listening to them for just five minutes.

Recently, emotional intelligence has become widely recognized as an important predictor of a child's success later in life. The more in touch with emotions and the better able a child is to understand and get along with others, the sunnier that child's future, whatever his or her academic IQ. The same is true for relationships between spouses. The more emotionally intelligent a couple--the better able they are to understand, honor, and respect each other and their marriage--the more likely that they will indeed live happily ever after. Just as parents can teach their children emotional intelligence, this is also a skill that a couple can be taught. As simple as it sounds, it can keep husband and wife on the positive side of the divorce odds.

Why Save Your Marriage?
Speaking of those odds, the divorce statistics remain dire. The chance of a first marriage ending in divorce over a forty-year period is 67 percent. Half of all divorces will occur in the first seven years. Some studies find the divorce rate for second marriages is as much as 10 percent higher than for first-timers. The chance of getting divorced remains so high that it makes sense for all married couples--including those who are currently satisfied with their relationship--to put extra effort into their marriages to keep them strong.