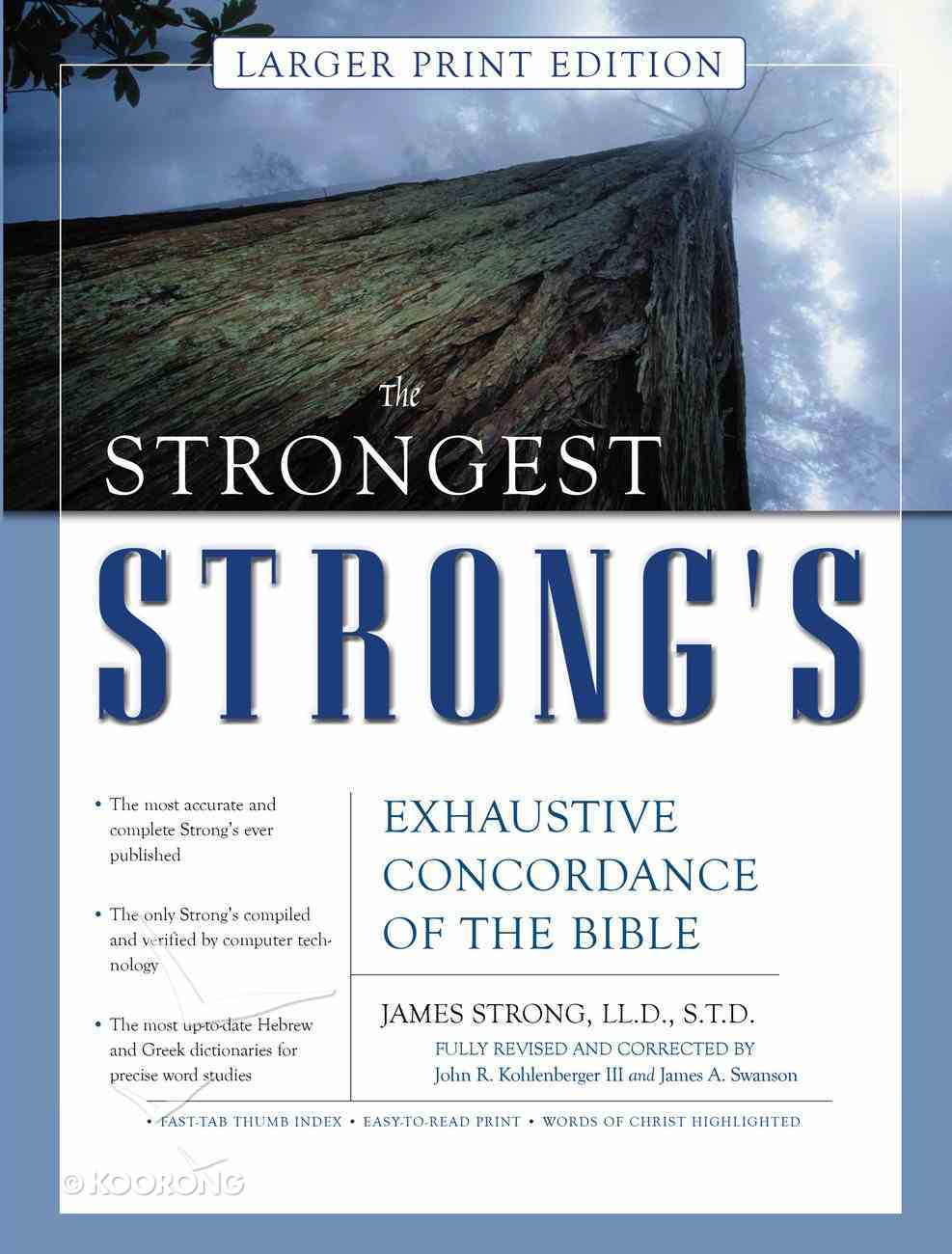 The time-honored concordance now improved with large, readable type, lay-flat Smythe-sewn binding, and the words of Christ in red.As with the first Strongest Strong's, this edition is written with unprecedented accuracy and clarity by John Kohlenberger and James Swanson. Longstanding...

7 available
Expected to ship within 2 hours from Australia.
Learn More
Free Shipping
for orders over $99.

The time-honored concordance now improved with large, readable type, lay-flat Smythe-sewn binding, and the words of Christ in red.As with the first Strongest Strong's, this edition is written with unprecedented accuracy and clarity by John Kohlenberger and James Swanson. Longstanding errors from the original have been corrected and omissions filled in. Word studies have been simplified and special care has been taken to maximize the thoroughness and ease of use.Special features include: - Computer-verified accuracy- Strong's numbering system for word studies in Greek and Hebrew- Goodrick-Kohlenberger numbers in the dictionary indexes that correspond to a growing library of reference tools that use these numbers- The most up-to-date Hebrew and Greek dictionaries- Includes Nave's Topical Bible Reference System - Cross-references to places and names used in Bible translations besides the KJV- Word counts of every word in the Bible- Fast-Tab locators- Smythe-sewn binding that opens fully,
-Publisher

How do you get from Strong to Strongest? SWEAT EQUITY A long time ago, James Strong and his colleagues did the best they could. They invested many years of hard work developing a Bible study tool that tracked every word in the King James Bible, the bestselling translation of his day, and Strong utilized the best "technology" of his day: lead pencils and index cards. What he created was a monumental gift to biblical scholarship for the time in which he lived. However, the limitations of the human mind and the inaccuracies of scribbled words on index cards paved the way for many unintentional errors and omissions to enter his work-and unfortunately-they were never corrected. Until now. Until the "Strongest Strong's." SWEET TECHNOLOGY In 1978, two brilliant scholars did the best they could. John Kohlenberger III and the late Dr. Edward Goodrick invested many years in developing an index-an original and exclusive computer model-called the "Portland Index" that kept track of every word in English, Greek, and Hebrew-with greater accuracy than lead pencils and index cards! In the 1990s Kohlenberger and James A. Swanson used the "Portland Index" to correct and verify with computer-precise accuracy the thousands of inaccuracies in Strong's original work. The result? Old errors have been eliminated. Omissions have been filled in and tens of thousands of new items were added! So don't be fooled by other versions of Strong's that claim to be "new" or "best." Only Zondervan's Strongest Strong's offers superior levels of accuracy and reliability.
-Publisher

John R. Kohlenberger III is a free-lance writer and lecturer and an adviser to the Christian book industry. Part-time instructor at Multnomah School of the Bible, he is author or coauthor of eleven reference works. He is a leading expert and editor on the application of computers to Bible-related reference projects and has produced the NIV Triglot, the NIV Interlinear Hebrew-English Old Testament, and co-authored both The NIV Complete Concordance and The NIV Exhaustive Concordance.

James Strong (1822-1894) was born in New York and graduated from Wesleyan University. Although a Methodist layman, he was professor of biblical literature at Troy University and of exegetical theology at Drew Theological Seminary. Dr. Strong was the author of a number of works, including the famous Exhaustive Concordance of the Bible.

James A. Swanson (ThM, University of South Africa) a specialist in applying database management to biblical studies, has taught at Multnomah Bible College. He is co-editor with John R. Kohlenberger III on several Old and New Testament language concordances, and author of the Dictionary of Biblical Languages with Semantic Domains: Hebrew and Aramaic. A