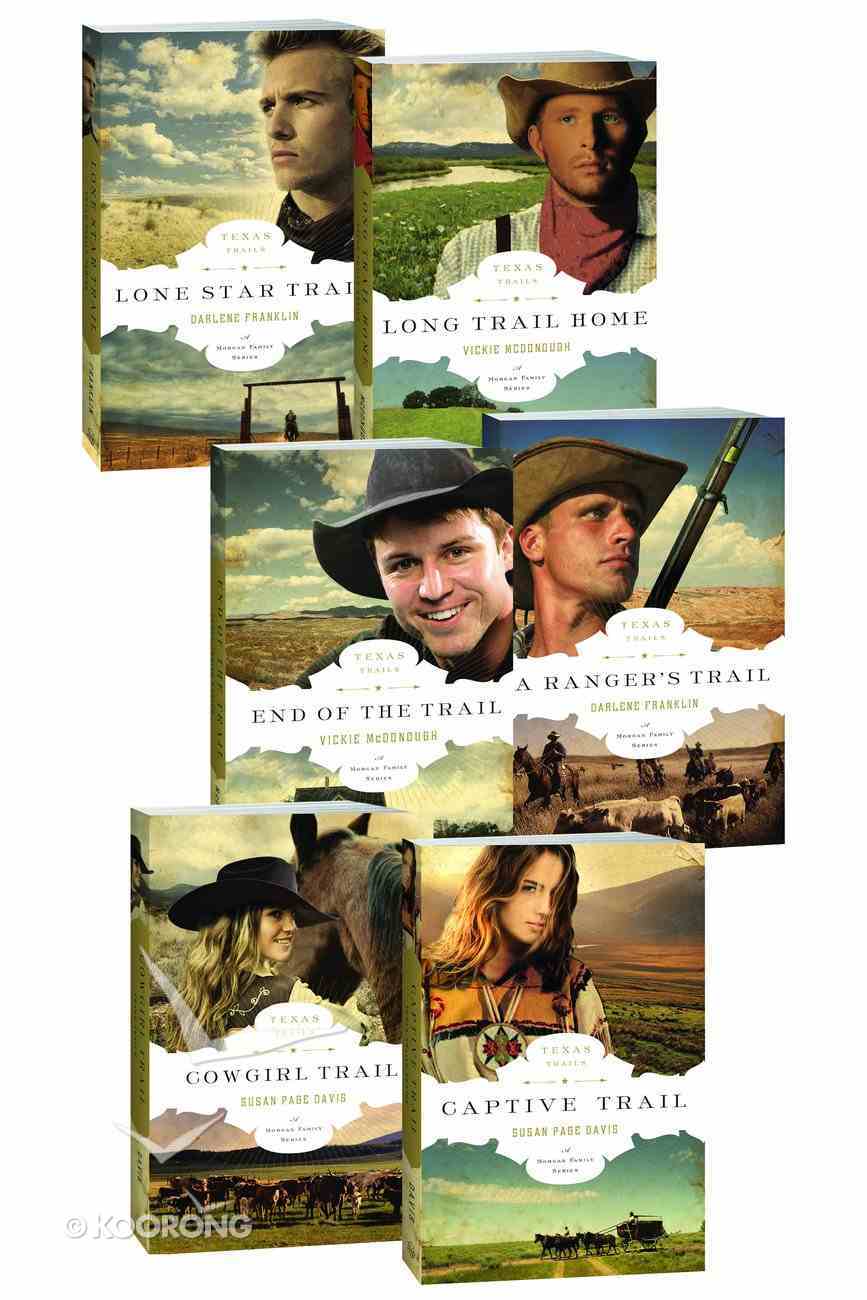 
The six-book series is about four generations of the Morgan family living, fighting, and thriving amidst a turbulent Texas history spanning from 1845 to 1896.


In Lone Star Trail, as much as Judson "Jud" Morgan dislikes the immigrant invasion, he can't help admiring Wande Fleischer. The immigrant is sweet and cheerful as she serves the Lord and all those around her. Can the rancher put aside his prejudice to forge a new future? Through Jud and Wande, we learn the powerful lessons of forgiveness and reconciliation among a diverse community of believers.


In Captive Trail, Butterfield Overland Mail Company driver Ned Bright finds a woman, exhausted and injured, lying on the road. With hard work, Ned discovers Taabe Waipu's identity. He plans to unite her with her family, but the Commanche have other ideas.


In Long Trail Home, Riley Morgan takes a job at the Wilcox School for Blind Children in an attempt for a new life after the Civil War. By helping the children and the pretty blind woman, Annie, he begins to find renewed hope. But when the school is in jeopardy of being closed and Annie's secret is revealed, Riley attempts to make peace with God despite an uncertain future.


In A Ranger's Trail, Texas Ranger Buck Morgan is called to investigate the murder of Leta Denning's husband at the beginning of the Mason County War. He has ties to a German family involved with Dennning's death, which makes Leta question his impartiality. A tentative trail emerges...one forged by respect and bound by vengeance and forgiveness.


In Cowgirl Trail, Maggie Porter is desperate to save her ranch as her father's health fails and the cowboys walk off the job. To everyone's surprise, she turns to the town's women for help. The cowgirls must herd, rope, and drive the cattle to the market. With only two days left, outlaws charge the small band in an effort to start a stampede. Will they lose everything? Where will their help come from?


In End of the Trail, a high stakes poker game ends with Brooks Morgan holding the deed to his new friend Will's ranch, a vague promise to "take care of Keri," and Will's mysterious demise. When Brooks finally rides to the Raven Creek Ranch, he is greeted by a rifle pointed right at his chest. This is the "Keri" he promised to take care of. As Will's niece, Keri believes the ranch was promised to her. Keri and Brooks both want to save the ranch, but will their differences make that impoosible?

Susan Page Davis is the author of more than thirty published novels. She's a Carol Award Winner and a two-time winner of the Inspirational Readers' Choice Award. In 2011, Susan was named Favorite Author of the Year in the 18th Annual Heartsong Awards. A native of Maine, she and her husband, Jim, now live in western Kentucky.