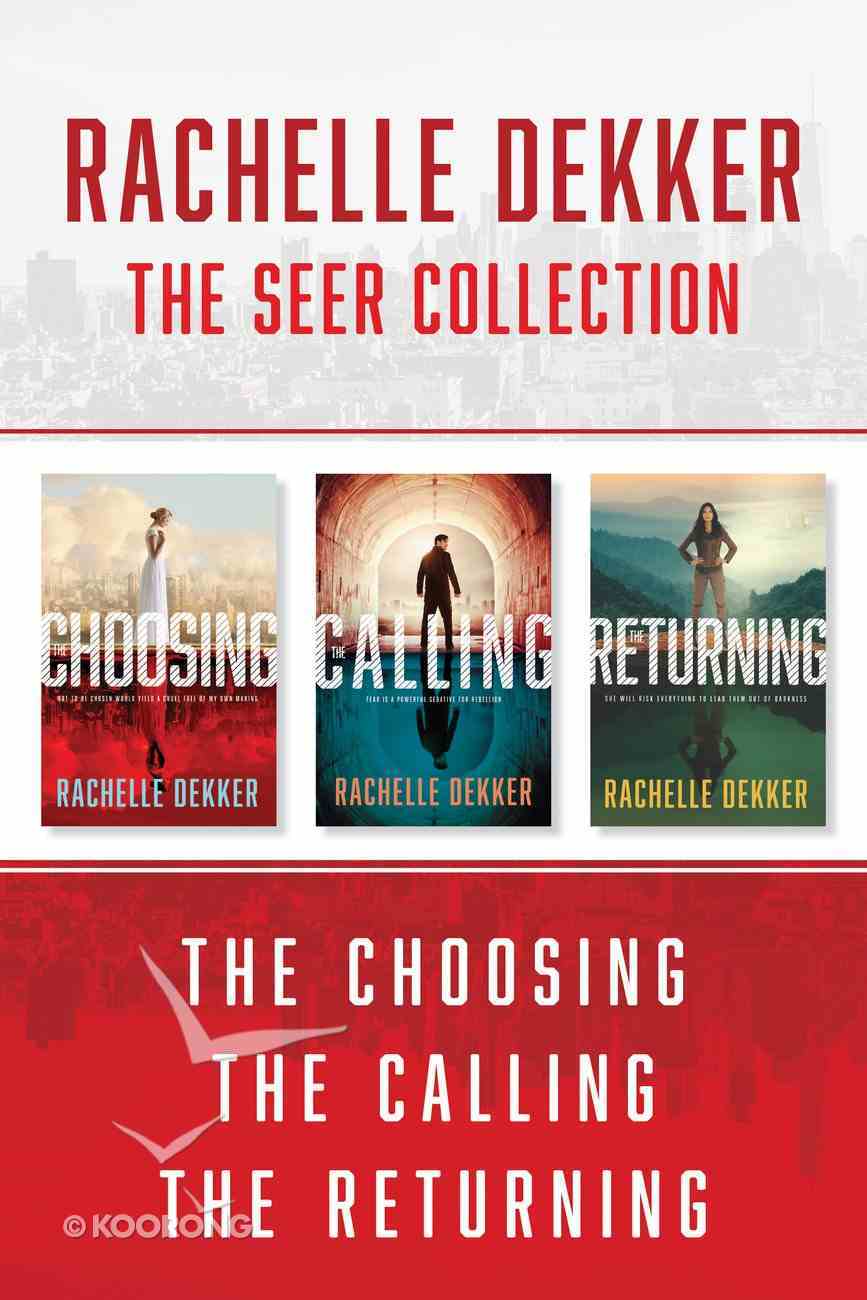 The the Choosing / the Calling / the Returning (A Seer Novel Series)

The Calling (#02 in A Seer Novel Series)
Rachelle Dekker
eBook

This Collection combines three of Rachelle Deckker's Dystopian novels into one volume for a great value!

The Choosing:
2016 Christy Award Winner! (Young Adult category) / 2016 Christy Award Finalist (First novel category)
Like all citizens since the Ruining, Carrington Hale knows the importance of this day. But she never expected the moment she'd spent a lifetime preparing for-her Choosing ceremony-to end in disaster. Ripped from her family, she'll spend her days serving as a Lint, the lowest level of society. She knows it's her duty to follow the true way of the Authority. But as Carrington begins this nightmare, rumors of rebellion rattle her beliefs. Though the whispers contradict everything she's been told, they resonate deep within. Then Carrington is offered an unprecedented chance at the life she's always dreamed of, yet she can't shake the feeling that it may be an illusion. With a killer targeting Lints and corruption threatening the highest levels of the Authority, Carrington must uncover the truth before it destroys her.

The Calling:
Remko Brant had never been so sure of anything as escaping the Authority City with Carrington Hale. But bravado comes easy when you have nothing to lose. Now a husband, father, and the tactical leader of the Seers, Remko has never had so much at risk. As he and his team execute increasingly dangerous rescue missions inside the city, they face growing peril from a new enemy. Recently appointed Authority President Damien Gold claims to be guiding a city shaken by rebellion into a peaceful, harmonious future. But appearances can be deceiving. In order to achieve his dangerous ambitions, Gold knows he must do more than catch the rebels-he must destroy the hope their message represents ... from the inside out. With dissension in his own camp-and the CityWatch soldiers closing in-Remko feels control slipping through his fingers. To protect those he loves, he must conquer his fears and defeat Gold ... before one of them becomes his undoing.

The Returning:
Twenty years have passed since Carrington and Remko Brant's baby, Elise, was kidnapped and they were forced to leave her captive in the Authority City. Though they fled with the Seers far from Authority reach, they've never given up hope of rescuing their daughter from the man who betrayed them. Now Authority President, he's ushered the city into a new era of "peace"-one where the Scientist Roth Reynard's Genesis Serum has eradicated all memory of emotion or rebellion. But the mysterious Aaron and his Seers are once again on the move, threatening the illusion the Authority has worked so hard to build. As the Seers send seven chosen warriors to rescue Elise and bring restoration to the Authority City, the lines are drawn for a final battle between light and darkness. The key to ultimate victory may rest within the strangely powerful girl who has felt forgotten but was never abandoned-a truth she'll need to wage war against the powerful forces of evil.
-Publisher

Rachelle Dekker is the Christy Award-winning author of The Choosing, The Calling, and The Returning in the Seer series. The oldest daughter of New York Times bestselling author Ted Dekker, Rachelle was inspired early on to discover truth through the avenue of storytelling. She writes full-time from her home in Nashville, where she lives with her husband, Daniel, and their son, Jack. Connect with Rachelle at www.rachelledekker.com.