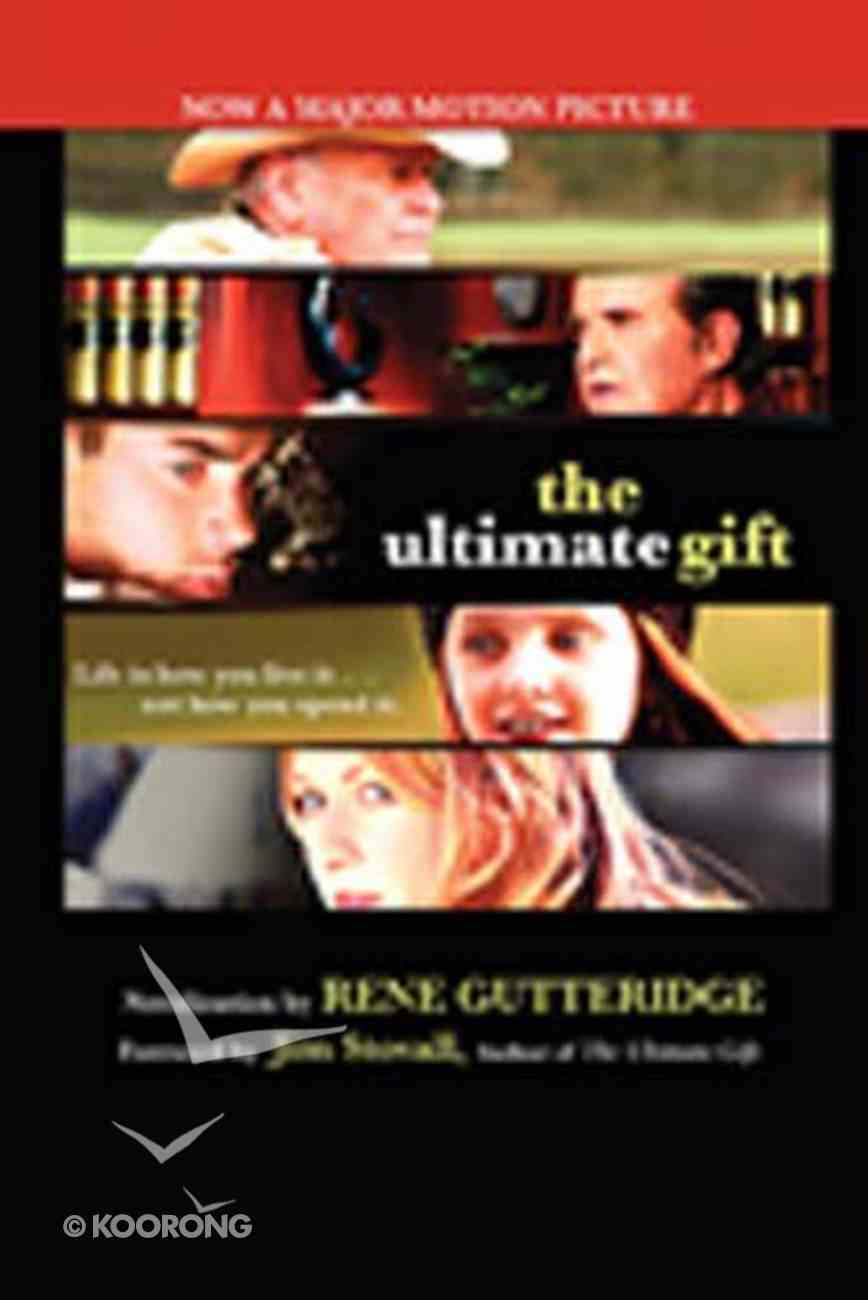 Jason Stephens lives a life of wealth. A life of privilege. A life that's about to take a radical turn. Jason always had a straightforward relationship with his billionaire grandfather, Howard "Red" Stevens. He shunned him but welcomed his money....

My Life as a Doormat (In Three Acts)
Rene Gutteridge
eBook

Jason Stephens lives a life of wealth. A life of privilege. A life that's about to take a radical turn. Jason always had a straightforward relationship with his billionaire grandfather, Howard "Red" Stevens. He shunned him but welcomed his money. So he figured when Red died, his part of the inheritance would be a simple cash transaction that would fund his extravagant lifestyle.^Instead, for Jason to receive his inheritance, he's given an ultimatum...a series of twleve tests or "gifts" as Red calls them. If he fails at any one of them, he loses everything. If he completes them all, the ultimate gift will be his.^One of those "gifts" involves finding a friend...something Jason has never experienced before. Yet this unlikely friendship and an unexpected romance may just open his eyes to what he's been missing all along.^"You don't begin to live until you've lost everything."
-Publisher

Jason thought his inheritance was the gift of money and lots of it ... but Jason thought wrong. Based on the major motion picture The Ultimate Gift, trust fund baby Jason Stevens must embark on a journey of discovery, having to answer the ultimate question: "What is the relationship between wealth and happiness?"
-Publisher


Theophilus Hamilton stood near the large glass window that framed a world he hardly understood anymore. He didn't turn around but instead let his gaze fall to the busy city below. A deep sadness tangled his words, so he took a moment to compose himself. The inevitable had finally come, but it didn't make it any easier.


He stayed at the window as he addressed Miss Hastings.


"Contact family members, the various corporate boards and business interests . . ." He sighed. There was a lot to take care of. Now wasn't the time to mourn. And Hamilton knew that perhaps he mourned more for what Red had endured in life.


Red was at peace now, but there would be nothing resembling peace in the wake of his death. "And let's call a meeting."


"Yes, sir," Miss Hastings said. She turned to leave the room, then stopped and turned back to Hamilton. "Sir, I am so sorry for your loss." She pulled the heavy oak doors of his office closed.


Clutching his cane, he gazed out the dark window and wondered how well he would be able to tolerate the wolves that had been waiting and circling for days now. Oh, yes, they would put on their sad faces. Some of them. Others would adopt a false solicitousness. No matter. Everything was set into motion now; no man could change it. And he doubted it would change any man, either.


But for a man whose life had gone terribly wrong in so many different ways, he'd had hope all the way to the end.


Hamilton closed his eyes. The older he got, the less he held out much optimism for anything. But maybe, just maybe, he had a little, too.


His mind wandered back to the first time he'd ever heard Red's voice. It had been a phone call, placed to Hamilton right after he'd graduated from law school.


"Am I speaking with Theophilus Hamilton?"


"Name's Howard Stevens. You can call me Red. I need a lawyer for a few business ideas I have, a few still in the dream stage."


Hamilton smiled now. Red Stevens and his dreams. He was at peace. But Theophilus understood peace would not be a part of his own immediate future.


The day couldn't have been grayer. Hamilton stood near the pastor, surveying the five-hundred-plus mourners who clustered around the shiny mahogany casket of Red Stevens. Flowers, bright and white, were the only color among a graveyard filled with stately, above ground tombs and important people all dressed in suitable dark clothing, every single one carrying a black umbrella.


Their faces reflected more aversion to the rain they were forced to stand in than to the death of the man they were here to lament. Behind the mourners and down the hill a little, Hamilton spotted one pink umbrella, which was doing a poor job of protecting its keeper from the rain, since the young girl wasn't putting it over her head. Instead, she seemed to be the only one embracing the moment, with her face tilted upward to the sky as it bathed her in wetness.


Hamilton sighed. Oh, how he wished there could be more of that kind of goodness and innocence in the world.


The pastor, hunched under his own black umbrella, cupping his little black book, was doing his best to uphold the sanctity of the moment. "Though the skies may weep," he said, "the Bible assures us that 'precious in the sight of the Lord is the death of his saints.'"


No one--near Hamilton, anyway--looked as though they cared at all what the Bible said. Red's two sons, Bill and Jack, stood just three feet away, oblivious to the idea they were supposed to appear sorrowful.


"I wonder who the old man negotiated with for the rain," Jack said with a cynical smile to Bill, Red's oldest.


"Well, it's a sure bet he's laughing, watching us get soaked."


"There's not a person here," the pastor continued, "whose life in some way has not been touched by Howard 'Red' Stevens."


Hamilton watched Jack and Bill glance at each other and roll their eyes. Jack, the playboy of the family, pulled up the sleeve of his coat and looked at his watch. Bill glanced down at some sort of organizing device or cell phone in his hand, then quietly put it back in his pocket. It was all Hamilton could do not to say something, but that wasn't his way. And it hadn't been Red's either. He'd let his children become what they'd become. He'd tried a time or two to step in and talk some sense into any of them who would listen, but they never listened unless he was talking in the language of dollar signs.


Hamilton's gaze found its way back to the little girl, who seemed intent on getting wet. He wondered why such a young girl felt the need to wear such dark lipstick. She couldn't have been more than ten years old, but her lips were stained the color of wine grapes. What was the world coming to? But he smiled as the mother suddenly noticed the umbrella to her side and rushed to put it back in its place, much to the young girl's disappointment.


"Red often quoted Malcolm Muggeridge," the pastor said to a crowd growing more agitated with every wet minute that went by, "saying that 'every happening, great or small, is a parable by which God speaks to us; and the art of life is to get the message.'


May the message of Red Stevens continue in the hearts of those he leaves behind."


The pastor seemed to sense he was losing their interest. He turned to Bill. "Bill?" He gestured toward the casket.


"Uh . . . yes," Bill said, stepping forward. Reaching into his coat, he pulled out a small canister. "Even though Dad moved his corporate offices from Texas many years ago, for tax reasons, he always said he wanted to be buried under Texas soil." He opened the canister and shook some dirt onto the casket, then stepped back.


Somebody touched Hamilton's elbow. He didn't have to turn around. He knew it was Miss Hastings, assuring him he was right for keeping silent and avoiding a scene.


Suddenly the loud rumblings of a car caused the entire crowd to turn as a vintage 1971 Dodge Charger R/T slowed on the small cemetery road below. What little dirt was left on the casket fell off as the ground shook from the revving engine. Hamilton could hardly stop himself from throwing up his hands in disgust. But then again, neither could the other mourners, whose mouths hung open at the sight of the yellow-and-black muscle car roaring to a stop in front of them.


The young man getting out of the car was apparently the only one who hadn't gotten the family memo about what kind of etiquette was expected. He flung the car door open, nursing a cigarette and likely a bad hangover, judging by the state of his clothes and hair. Some hideous rock-and-roll song thumped against the backdrop of the rainstorm, until he turned it off and rose out of the car. He wore black sunglasses and an expression that might've been worse if they could see his eyes. Beside him an expressionless young woman appeared in a taut black dress that spoke to the idea she might be at the wrong social event.


"Is that him?" Miss Hastings whispered.


"That's him." Hamilton sighed. He watched Jason Stevens walk up the small hill, dismissing his cigarette as he tossed it aside into a puddle. He also dismissed his girlfriend and two others who had crawled unsteadily from the backseat of the car, walking ahead of all of them and heading straight for his mother, Sarah.


Even with all the Botox she'd managed over the years, his mother was able to lift her eyebrows high in a frightful expression of embarrassment and shock. "You're late!" she said in a sharp tone.


Jason Stevens propped his sunglasses on top of his head, glancing around at his family members with the kind of attitude that got you cut out of the will.


Then he offered a perfectly inappropriate smile. "For what?"