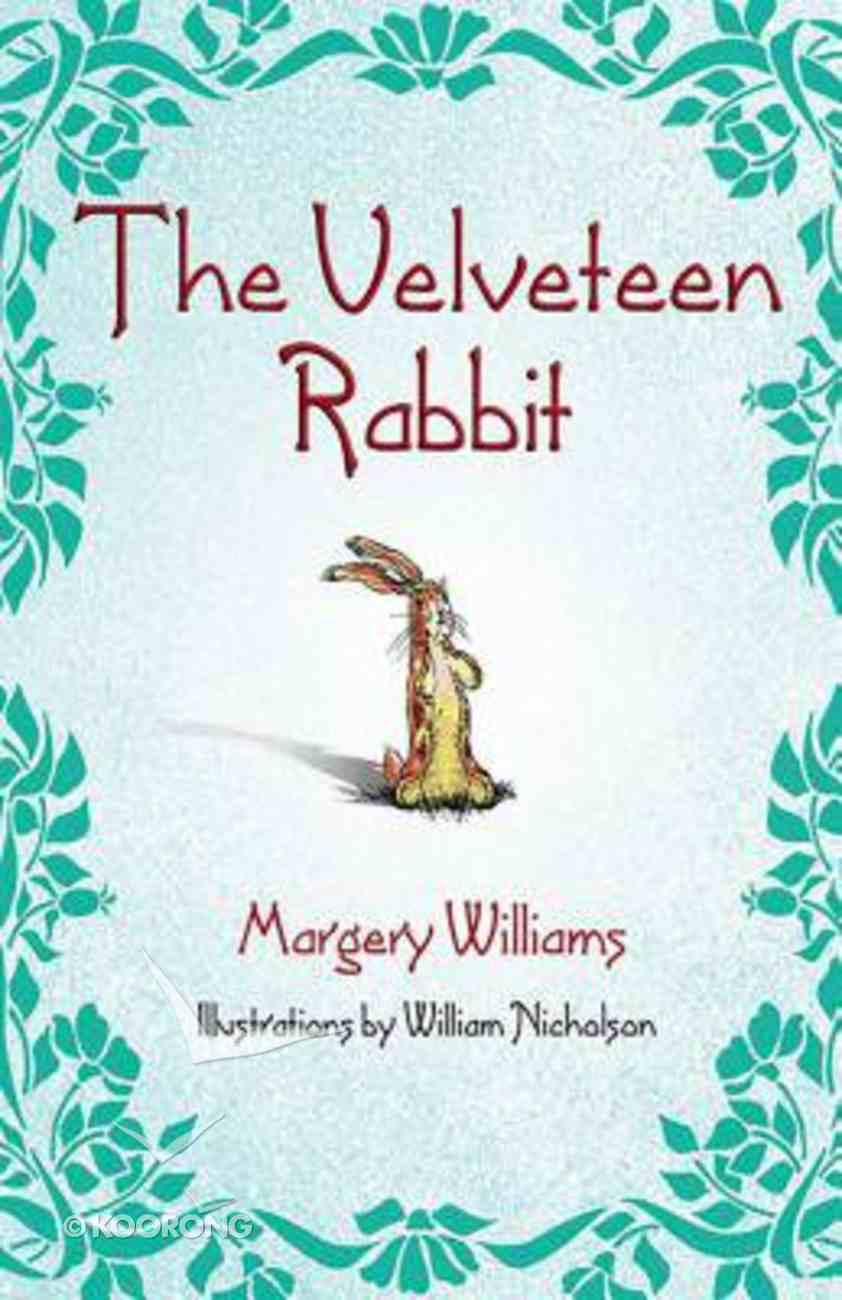 The Rabbit in the stocking isn't as expensive as the other toys: he's covered in velveteen. On Christmas Day, the Boy enjoys his new toy but then quickly forgets and neglects him. Shunned and unsure, the Velveteen Rabbit questions his...

It Will Be Okay
Lysa Terkeurst
Hardback

The Song of the King
Max Lucado
Hardback

Whatever You Grow Up to Be
Karen Kingsbury, Valeria Docampo (Illus)
Hardback

The Rabbit in the stocking isn't as expensive as the other toys: he's covered in velveteen. On Christmas Day, the Boy enjoys his new toy but then quickly forgets and neglects him. Shunned and unsure, the Velveteen Rabbit questions his worth. Should he even becalled a real toy? An answer comes from his friend, the Skin Horse: "Real isn't how you are made. . . .It's a thing that happens to you. When a child loves you for a long, long time, not just to play with, but REALLY loves you, then you become Real." The Velveteen Rabbit's journey through love and loneliness to become who he was really meant to be is a story that inspires us all on our own journey to Real. ^The Velveteen Rabbit is a timeless tale of friendship, love, acceptance and honesty. When the world seems uncertain, Margery Williams's classic story reminds all of us what really matters. ^The type in this edition has been reset to emphasize the poetry of the language and to bring out the depth of sentiment in the story. W
-Publisher

From the Forward by Toni Raiten-D'Antonio, author of The Velveteen Principles The Velveteen Rabbit, which first appeared in 1922, is full of the magic and playfulness that fill a childrs"s world and are almost impossible to find in the land of adults. But as many millions of readers have discovered, this book offers wisdom for readers of all ages. The story confronts some of the most essential questions we ever ask: Who am I? Do I have worth? What is life all about? As they search for happiness, each one of Williamsrs"s characters seems to embody very basic human traits. The Rabbit is that part of us who is young at heart, and hopeful, and insecure, and afraid. The not-so-nice toys in the nursery represent excessive pride, superiority and insensitive competitiveness. Nana, the governess, is cold and too busy to notice much about others. And the Skin Horse stands for the kindness, wisdom and quiet integrity we all hope to acquire some day. Yes, it is a story for children. But it is also meant for any person with an open mind and a receptive heart. As you read this wonderful book, the genuine humanity in its characters will become obvious. You will begin to consider how much you are like the little Rabbit, and how much you admire the Skin Horse. Most important, you will begin to understand that by holding true to your highest values, and honoring your own lifers"s experience, you too can strive to be Real, just like the Horse and the Rabbit. From the Velveteen Rabbit THERE was once a velveteen rabbit, and in the beginning he was really splendid. He was fat and bunchy, as a rabbit should be; his coat was spotted brown and white, he had real thread whiskers, and his ears were lined with pink sateen. On Christmas morning, when he sat wedged in the top of the Boy's stocking, with a sprig of holly between his paws, the effect was charming. There were other things in the stocking, nuts and oranges and a toy engine, and chocolate almonds and a clockwork mouse, but the Rabbit was quite the best of all. For at least two hours the Boy loved him, and then Aunts and Uncles came to dinner, and there was a great rustling of tissue paper and unwrapping of parcels, and in the excitement of looking at all the new presents the Velveteen Rabbit was forgotten. For a long time he lived in the toy cupboard or on the nursery floor, and no one thought very much about him. He was naturally shy, and being only made of velveteen, some of the more expensive toys quite snubbed him. The mechanical toys were very superior, and looked down upon every one else; they were full of modern ideas, and pretended they were real. The model boat, who had lived through two seasons and lost most of his paint, caught the tone from them and never missed an opportunity of referring to his rigging in technical terms. The Rabbit could not claim to be a model of anything, for he didn't know that real rabbits existed; he thought they were all stuffed with sawdust like himself, and he understood that sawdust was quite out-of-date and should never be mentioned in modern circles. Even Timothy, the jointed wooden lion, who was made by the disabled soldiers, and should have had broader views, put on airs and pretended he was connected with Government. Between them all the poor little Rabbit was made to feel himself very insignificant and commonplace, and the only person who was kind to him at all was the Skin Horse. The Skin Horse had lived longer in the nursery than any of the others. He was so old that his brown coat was bald in patches and showed the seams underneath, and most of the hairs in his tail had been pulled out to string bead necklaces. He was wise, for he had seen a long succession of mechanical toys arrive to boast and sw
-Publisher

Margery Williams was born in London in 1881. "The Velveteen Rabbit "was the first, and best known, of her thirty children's books. C

The Prisoners, the Earthquake and the Midnight Song: A True Story About How God Uses People to Save People (Tales That Tell The Truth Series)
Bob Hartman, Catalina Echeverri (Illus)
Hardback

I Prayed For You (Picture Book)
Jean Fischer
Hardback