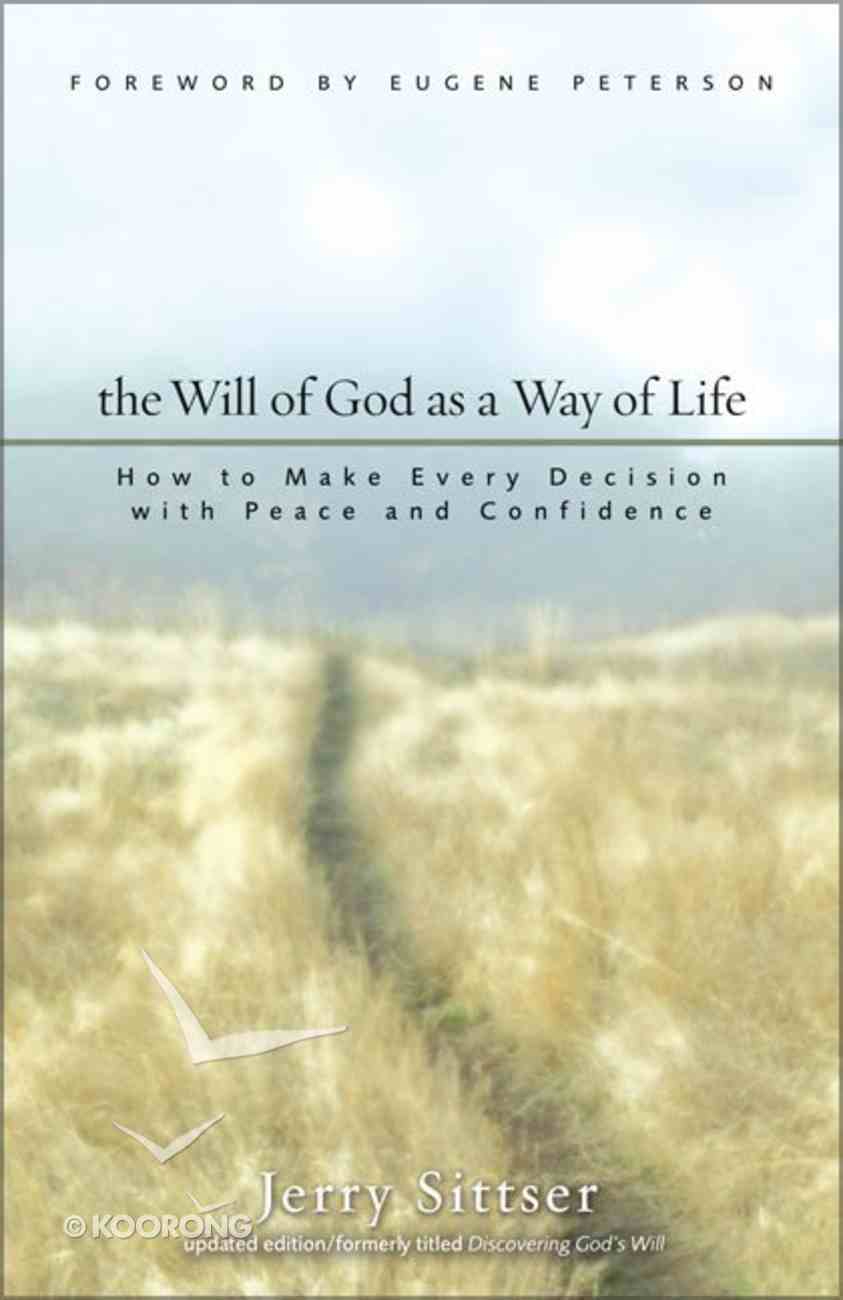 The Will of God as a Way of Life

Practical help for understanding and following God’s will for your life “God has a plan for our lives,” but what does that mean in practical terms? How do we know God’s will for important life decisions, like who...

A Grace Revealed: How God Redeems the Story of Your Life
Jerry Sittser
eBook

The Broken Way: A Daring Path Into the Abundant Life
Ann Voskamp
Paperback

Hope in the Dark: Believing God is Good When Life is Not
Craig Groeschel
Paperback

“God has a plan for our lives,” but what does that mean in practical terms? How do we know God’s will for important life decisions, like who to marry? what job to take what church to join How can we be free if God has a perfect plan for us? Does suffering mean we are off track? How exactly does God speak? Author Jerry Sittser explores these questions and offers a biblically based approach that is truly liberating. No matter what decisions we’ve already made, he points out that it is still possible to live out God’s perfect will—even if we think we’ve married the wrong person, chosen the wrong career, or landed in some kind of serious trouble.

This new edition includes study questions designed to help individuals or groups who are faced with decisions—large or small.
-Publisher

The Will of God as a Way of LifeCopyright 2000, 2004 by Gerald L. SittserFormerly titled Discovering God''s WillRequests for information should be addressed to:Zondervan, Grand Rapids, Michigan 49530Library of Congress Cataloging-in-Publication DataSittser, Gerald Lawson, 1950-The will of God as a way of life : how to make every decision with peace andconfidence / by Gerald L. Sittser.-Rev. ed.p. cm.Includes bibliographical references.ISBN 0-310-25963-01. God-Will. 2. Discernment (Christian theology) 3. Christian life-Presbyterian authors. I. Sittser, Gerald Lawson, 1950- Discovering God''s will.II. Title.BV4509.5.S58 2004248.4-dc222004006068All Scripture quotations, unless otherwise indicated, are taken from the New RevisedStandard Version of the Bible. Copyright 1989 by the Division of Christian Educationof the National Council of the Churches of Christ in the United States of America. Usedby permission. All rights reserved.All rights reserved. No part of this publication may be reproduced, stored in a retrievalsystem, or transmitted in any form or by any means-electronic, mechanical, photocopy,recording, or any other-except for brief quotations in printed reviews, without the priorpermission of the publisher.Published in association with the literary agency of Ann Spangler and Company, 1420Pontiac Road S.E., Grand Rapids, MI 49506.Interior design by Beth ShagenePrinted in the United States of America04 05 06 07 08 09 10 /?DC/ 10 9 8 7 6 5 4 3 2 1P a r t IKnowing God''s WillO Lord our God, grant us grace to desire you with a whole heart,that so desiring you we may seek you and find you; and so findingyou, may love you; and loving you, may hate those sins from whichyou have redeemed us, for Jesus Christ''s sake.AnselmWe Never Know HowThings Will Turn OutIspent the first twenty years of my life feeling certain I knew the willof God for my life. I was going to practice medicine. I was as sureabout the future as I was about the difficulty of getting there, for makingit to the end seemed a daunting task to me. While still in highschool, I talked seriously with a plastic surgeon about joining his practicewhen I completed my education, and he invited me to his summerhome to show me slides of his work. By the time I entered college, I waseager to enroll in science and math courses to prepare for medicalschool. I had one goal in mind. Everything else was a distraction andinconvenience to me, like having to do chores on a hot summer day.But I made a fatal mistake in selecting a college. Hope College,located in Holland, Michigan, was a liberal arts institution, whichmeant that it required students to take a broad range of general studiescourses. If I ever wanted to earn a degree from Hope, therefore, Iwould have to do more than study science. I would also have to readDostoyevsky, listen to Beethoven, study the causes of the CrimeanWar, and write a persuasive essay.I was about as eager to study the liberal arts as I was to read a dictionaryfor weekend pleasure. But I had no choice. In my first semesterI signed up for a freshman writing class. For years I had readliterature only under duress and had avoided writing altogether, exceptwhen my teachers forced me to put pen to paper. Fortunately, my writingprofessor, Dr. Nancy Miller, knew my type. Savvy and sociable, shewas adept at handling people like me. When I griped one day aboutthe writing requirement, she ignored me as if I had just made a blandcomment about the Detroit Lions. When I told her that I simply didnot need the course because I was not planning to write for a career,she replied, "You never know, Jerry, how things will turn out."She was right, of course. I ended up doing something far differentfrom what I had assumed was God''s will for my life. I did not attendmedical school; I enrolled in seminary. I did not become a medicaldoctor; I became a minister instead. Later I returned to graduateschool to earn an advanced degree. Now I serve as a college professor,and I write in m
-Publisher

Jerry Sittser is Professor and Chair of Theology at Whitworth University. He holds a master of divinity degree from Fuller Theological Seminary and a doctorate in the history of Christianity from the University of Chicago. He is the author of several books, including A Grace Disguised and The Will of God as a Way of Life. Married to Patricia, he is the father of three children and two step-children, all grown. SPANISH BIO: Gerald L. Sittser es profesor de religion y filosofia en Whitworth College en Spokane, Washington. Ostenta un titulo de maestro en divinidades obtenido en el Seminario Teolo