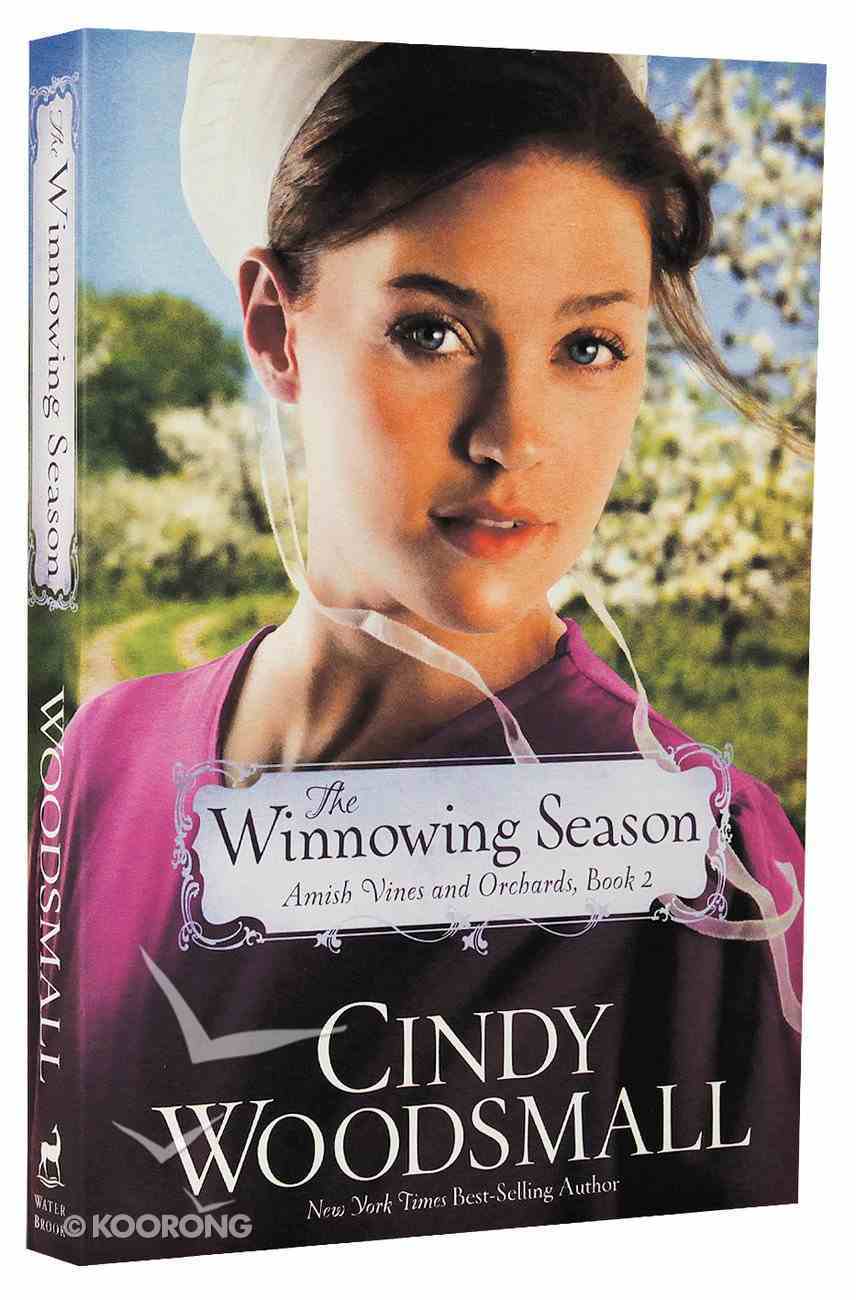 The Winnowing Season (#02 in Amish Vines And Orchards Series)

The tornado that devastated Kings’ Orchard pushed Rhoda, Samuel, and Jacob to make a new start in Maine. Are they strong enough to withstand the challenges of establishing an Amish community—and brave enough to face the secrets that move with them?...

Ours For a Season
Kim Vogel Sawyer
Paperback

The tornado that devastated Kings’ Orchard pushed Rhoda, Samuel, and Jacob to make a new start in Maine. Are they strong enough to withstand the challenges of establishing an Amish community—and brave enough to face the secrets that move with them?

On the eve of their departure to begin a new Old Order Amish community outside of Unity, Maine, Rhoda Byler is shocked to discover that choices made by her business partner and friend, Samuel King, have placed her and her unusual gifts directly into the path of her district’s bishop and preachers. She is furious with Samuel and is fearful that the Kings will be influenced by the way her leaders see her, and not what they know to be true—that Rhoda’s intuition is a gift from God.

Jacob King won’t be swayed by community speculation. He loves Rhoda, believes in her, and wants to build a future with her in Maine. But when the ghosts of his past come calling and require him to fulfill a great debt, can he shake their hold before it destroys what he has with Rhoda? Samuel has a secret of his own—one he’ll go to great lengths to keep hidden, even if it means alienating those closest to him. Throwing himself into rehabilitating the once-abandoned orchard, Samuel turns to a surprising new ally.

Book 2 of the Amish Vines and Orchards series asks: can the three faithfully follow God’s leading and build a new home and orchard in Maine? Or will this new beginning lead to more ruin and heartbreak?
-Publisher

Rhoda shoved her to-do list into the hidden pocket of her apron and slipped out of the summer kitchen. A brief glance assured her no one was around to see her. She needed a few minutes, however fleeting, without anyone tugging at her. Her shoulders and arms ached as she walked into the orchard.

She breathed in, and the heady scents of fall and ripe apples helped soothe her frayed nerves. After nearly two months of nurturing the tornado-ravaged orchard, she found the view both uplifting and disheartening. Despite their
long, hard days of cleaning up felled trees and mending broken ones, the oncevibrant orchard looked like a battlefield strewn with injured, defeated soldiers.

Would all of her and Samuel’s tending restore the wounded trees? Or simply prolong their dying?

How strange that she found comfort in walking among these wounded trees. Much of the orchard lay dormant, waiting for late winter, when new trees would be planted.

But she wouldn’t be here for that.

A ladder rested against a tree where she and Samuel had grafted tree limbs from storm-damaged trees into healthy ones, hoping their grafts would take. It wasn’t the right time of year for such work, but they were giving this orchard
their all before leaving it behind tomorrow.

A wavering, misty image stepped out from behind an apple tree.

The vision appeared real enough, but it wasn’t actually her little sister. Emma had been with God since the day she was murdered, since the day Rhoda all but sent her teary-eyed sister to that convenience store by herself at exactly the wrong time. Emma often formed in a visible way, as if Rhoda’s guilt over her death was burned so deeply into Rhoda’s soul that she would see her sister the rest of her days.

And maybe she would, but Rhoda dared to hope the move to Maine would end the haunting reminders.

Emma held out her arms, and Rhoda wished her little sister were truly here to embrace, but all Rhoda could do was watch. And pray.

Not long after she met Samuel King of Kings’ Orchard last summer, he asked if she’d partner her canning business with his family’s apple farming business. When she finally agreed, she did so hoping for several things to come from the agreement. One desire was for the aberrations to remain at home in Morgansville, some thirty miles away—and where all memories of Emma had been made.

But whether Rhoda was here at Kings’ Orchard or at home with her family, she had yet to be freed of Emma’s constant reminders that Rhoda had failed her.

Would Maine be an escape?

Emma stretched a hand toward her. “Don’t let me go. Don’t be afraid to hold on.”

Rhoda’s heart rate increased. Did it do any good to speak her sorrow out loud? “I have to move on. Can’t you see that?”

Emma’s eyes filled with tears, and Rhoda made herself turn away without responding. She walked to the top of a knoll. This orchard would be majestic again in a few years. Still, was Samuel doing the right thing by leaving its future
in Eli’s hands?

They would move to Maine tomorrow, to Orchard Bend specifically. Until Samuel went to close on the house a month ago, they had thought the land was in Unity, Maine. But at the closing, Samuel discovered that the farm bordered Unity.

Once they arrived there tomorrow, they would begin the challenge of restoring an abandoned apple orchard twice the size of this one. The aim was rock solid: reestablish the abandoned orchard in Maine so Kings’ Orchard and her Rhode Side Stands canning business could bring in the needed profits while this orchard was restored and returned to production.

But the reality of this venture was terrifying…and exhausting.

Hoofs rumbled against the earth, and she turned to see Samuel riding the chestnut Morgan toward her. He had the reins in one hand and a five-gallon bucket in the other. The bucket housed what they called their first-aid kit for the trees.

“Hey.” His lack of a smile as he dismounted didn’t surprise her. For every ounce of energy she gave working, he seemed determined to give double. “I thought I’d find you here where we worked last.” He gazed into her eyes for a
brief moment. “I know you’re tired, and you aren’t going to like what I have to say, but could you do me a favor and try to take it well?” Without waiting for her to answer, he walked the horse to a nearby tree and tethered it.

He had her pegged on both counts: bone tired and edgy. They’d had more spats in the last few weeks than two alpha dogs sharing a food bowl. Who knew that accomplishing everything on her to-do list would be so draining? Actually, now that she thought about it, the answer to that was Samuel and Jacob. Both had tried to get her to take numerous things off her list, like the experiments of growing herbs and developing mulch under horticultural lights. And both had tried for weeks to stop her from harvesting and canning the apples left by the tornado.

But she couldn’t let apples rot. And she couldn’t move to Maine without understanding how commercial greenhouse lights affected herbs and rotting leaves.

He dusted off his hands and returned to where she stood. “Well?”

A Bible verse echoed inside her—Peace I leave with you, my peace I give unto you. “I’ll do my best.”

His jaw clenched. “You have to appear before your church leaders tonight.”

The orchard around her turned hazy as she stared into Samuel’s eyes, trying to make sense of what he’d said.

With the message delivered, he turned and walked away.

She took off after him and grabbed his arm. “What do you mean?”

He barely glanced at her before shifting his attention to the horizon. “You know what it means.”

Her heart skipped a beat and felt as if it might stop altogether. “But why?”

He pulled a letter from his pocket. “This arrived in today’s mail.”

Without the slightest response he headed for the ladder and handsaw a few trees away.

She unfolded the plain white paper to find a short message in perfect handwriting.

Subject: Rueben Glick and his possible involvement in the destruction of Rhoda Byler’s crops.

Her hands trembled. How did they know what had happened to her fruit garden? She clutched the letter and shook it at him as he headed back her way.

“Did you take that incident to my bishop and deacon?”

Her family wouldn’t. They knew it would stir up trouble for her. Landon wouldn’t. He was too loyal a friend. The only other person she’d told who was responsible for destroying her fruit garden was Samuel.

Samuel’s jaw set. “It needed to be done.”

“But…but you gave me your word.” Compelled to read the rest, she returned her attention to the letter.

Dear Samuel, after much consideration we have prayerfully agreed that the matter you brought to our attention must be addressed. The charges are of such a serious nature that we cannot allow Rhoda Byler to go to Maine as a member in good standing unless this matter is settled first.

Since this matter needs to be settled before Rhoda leaves for Maine, and since your concern is that Rueben Glick is not only guilty of this incident but may be causing problems with others as well, we feel we have no choice but to allow this meeting to be open to anyone in the district who chooses to come.

Her blood ran hot as realization continued to dawn. Anger began to mingle with fear, but she couldn’t stop staring at the letter. Why had the ministers waited until the day before the move to call a meeting? But more important…why would Samuel do this to her?

Wasn’t it bad enough that Rueben Glick and his small band of nitwits had destroyed her fruit garden last August? She had been devastated when she’d arrived home with Samuel, Jacob, and Leah to discover what had been done.

The garden meant the world to Rhoda. Her Daed had given her the first blueberry bush when she was just seven. Every year since then he gave her more plants and land to plant them on. The garden grew and became her sanctuary, especially after her sister was murdered.

Rhoda had worked year after year to make the garden beautiful and yield a healthy crop. All the naysayers who didn’t like her and her odd ways had wanted her out of that garden. Some were jealous, but others were truly concerned that she was overstepping her place as a single Amish woman with too much independence and too much success. The number of stores that carried her canned products only increased. If she were married, those against her would probably feel different. Then again, if she were married, she wouldn’t have the time to devote to her business, and it wouldn’t be so successful.

For more reasons than she could explain, it meant everything to her to conceal from her community and neighbors that Rueben had uprooted her beloved vines and bushes. So she had called her friend Landon and asked him to bring over his Bobcat. By morning the land looked as if she had deliberately cleared her garden.