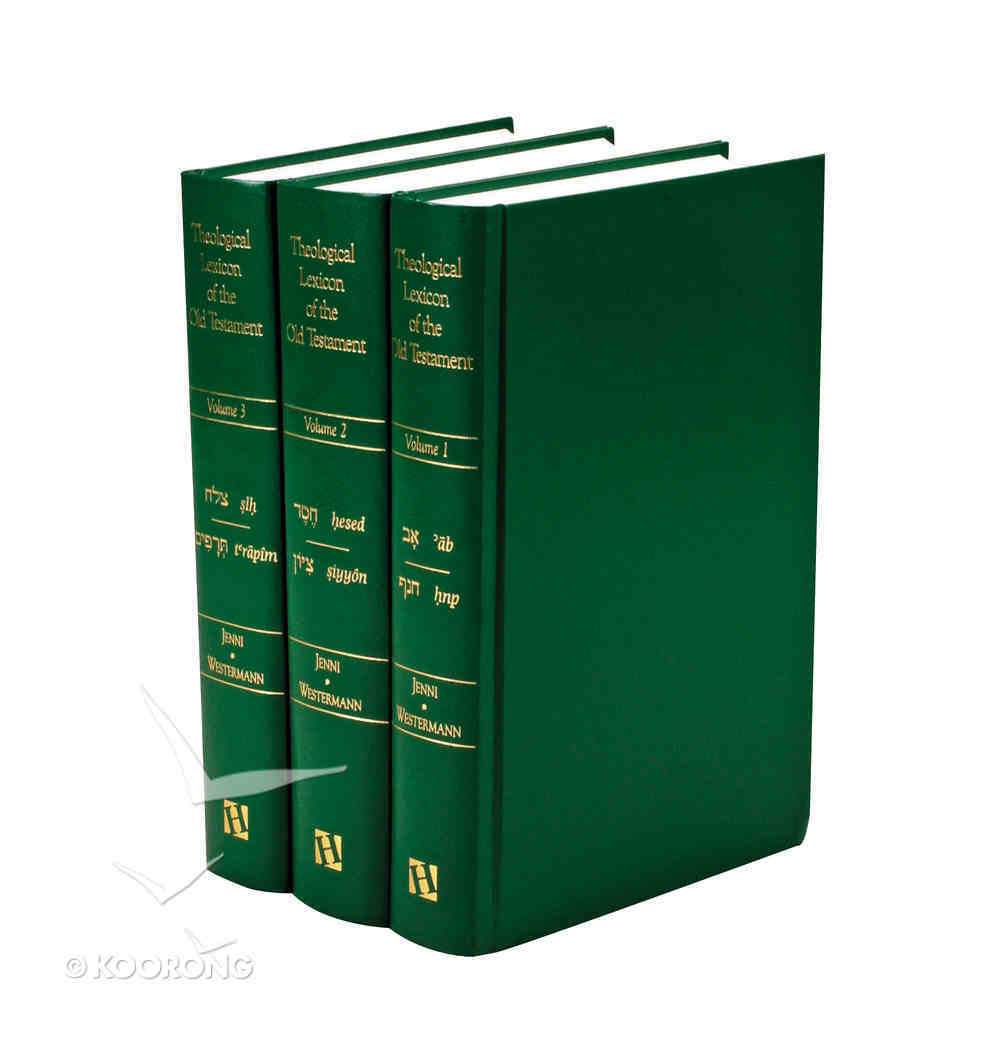 Now available in English, this standard German lexical reference provides a wealth of theological insight for academic study of the Old Testament, as well as for preaching and teaching. The data ranges from the historical to the theological, from the...

Now available in English, this standard German lexical reference provides a wealth of theological insight for academic study of the Old Testament, as well as for preaching and teaching. The data ranges from the historical to the theological, from the earliest occurrence of a particular word to its post-biblical use. From Hendrickson.

An indispensable and incomparable reference work, this translation of the Theologisches Handworterbuch zum Alten Testament makes accessible for the first time in English a wealth of theological insight. In these volumes outstanding scholars provide in-depth and wide-ranging investigations of the historical, semantic, and theological meanings of Old Testament concepts.Well-organized and clearly written articles analyze a significant portion of the Old Testament vocabulary. This reference work can serve a wide audience, from professors and researchers to pastors and students of the Bible. Even readers with little or no knowledge of Hebrew can use it profitably.Whereas traditional lexicons do little more than offer possible translations in the light of etymological and grammatical evidence, The Theological Lexicon of the Old Testament goes further, evaluating each term's theological relevance by clearly describing its actual usage in the language. In the process, it makes available to readers in many form- and tradition-critical insights hitherto buried in scattered commentaries, monographs, Old Testament theologies, journal articles, etc. Thus the individual articles serve as concise, well-structured histories of research with conclusions, discussion of controversies, and references to the most important literature.The methodological repertoire of the TLOT is deliberately broad because today it is generally agreed that no single approach can fully illuminate a term's meaning. Assumptions that led to ill-advised short-cuts-e.g., the chimera of a basic meaning from which all other meanings developed-have given way to a methodological pluralism, that considers a term's significance from several points of view and thus does more justice to actual usage.Words were included because of their importance within the Hebrew Bible, not their suitability as elements of a secondary system of Old Testament theology. Since the entries are generally ordered according to roots-the traditional and sensible approach for Semitic languages-and many words are treated as derivatives, synonyms, or antonyms of the terms listed in the article titles, thousands of words can be considered in about 330 articles. These other words can easily be found in the index. Besides examining the key verbs, nouns, and adjectives, the TLOT examines theologically noteworthy pronouns and particles in their own entries."Like a diamond, highly prized for its fine cut, sparkle, setting, durability, utility, and symbolism, Jenni-Westermann's Theological Lexicon of the Old Testament has enormous value for a variety of reasons. Its rich data range from the historical to the theological, from the earliest occurrence of a particular word to its post-biblical use, from its distribution in the canon to its attestation in other literature from the ancient Near East, from its grammatical and syntactical peculiarities to its religious nuance. The contributors retain their individual perspectives, which give freshness and excitement to the whole. I have long wished for an English translation of this important work so that my divinity students would have access to it. Now, thanks to Hendrickson Publishers, that whish has been granted." -James L. Crenshaw, Robert L. Flowers Professor of Old Testament, Duke University
-Publisher

Claus Westermann was Professor of Old Testament at the University of Heidelberg in Germany. He authored a number of books, including "Praise and Lament in the Psalms", "Roots of Wisdom", and "Prophetic Oracles of Salvation in the Old Testament", all published by WJK.