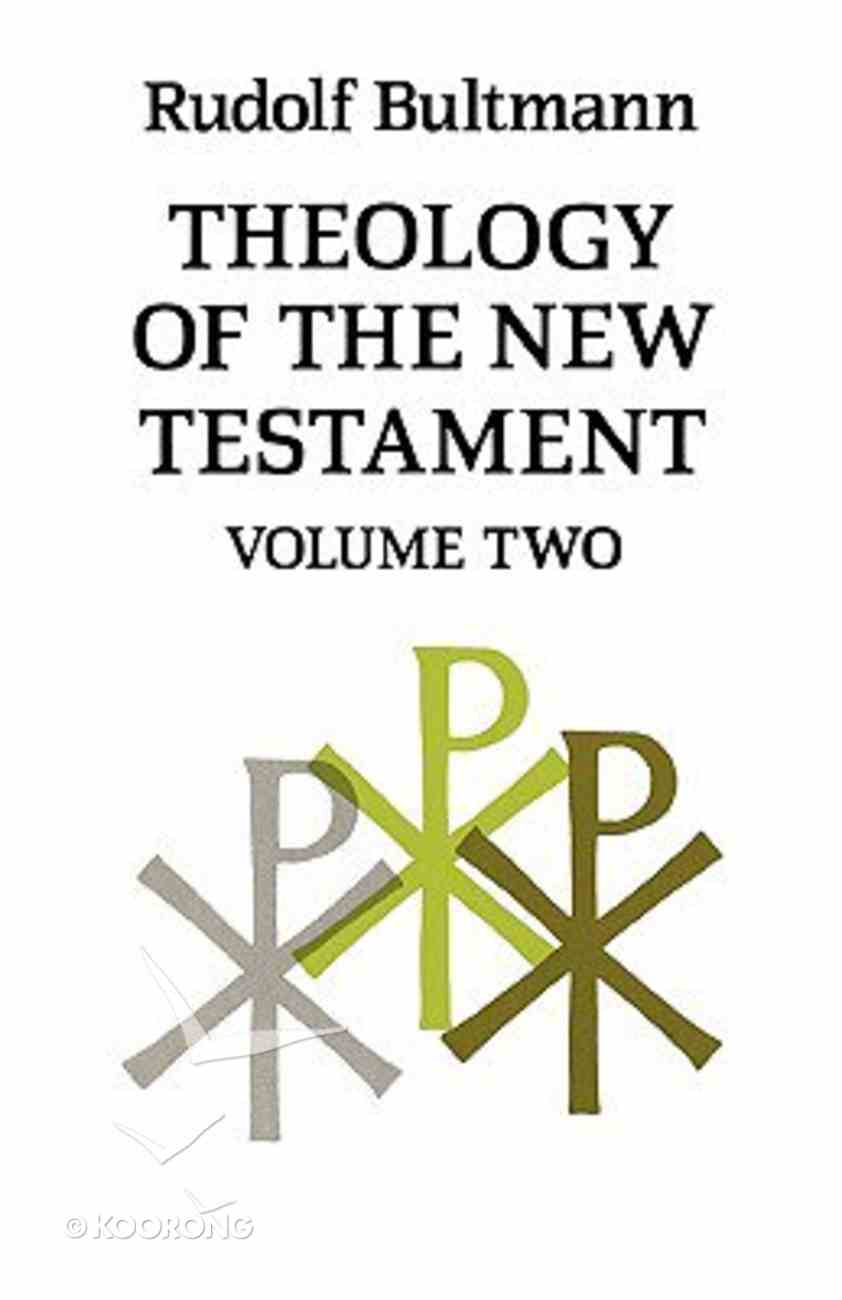 Theology of the New Testament (Vol 2)

The theology of the Gospel of John and the Johannine Epistles, and the development of the church. 'A book of first-rate importance which no New Testament student can afford not to read.' William Barclay

The theology of the Gospel of John and the Johannine Epistles, and the development of the church. 'A book of first-rate importance which no New Testament student can afford not to read.' William Barclay
-Publisher

Rudolf Bultmann, a highly acclaimed New Testament scholar, was born in the former German state of Oldenburg. His theological training, which began at the University of Tubingen in 1903, was subsequently carried out at the universities of Marburg and Berlin. Adolf von Harnack, Wilhelm Herrmann, and Johannes Weiss rank high among professors who most influenced Bultmann. In the course of his distinguished teaching career, brief appointments at the Universities of Marburg (1912-16), Breslau (1916-20), and Giessen (1920-21) were followed by a lengthy tenure at Marburg (1921-51) that put him in close association with the existentialist philosopher Martin Heidegger. Already enamored of Herrmann's insight that theology must engage experience as well as concepts, Bultmann was drawn to Heidegger's understanding of existence with its distinctive emphasis on two modes of being-authenticity and inauthenticity. That perception of the human struggle significantly informed Bultmann's understanding of the New Testament message as a clarion summons to authentic existence. While Bultmann did not slight Paul in his biblical scholarship, most of his publications centered on the Gospels. During his residency in Breslau, Bultmann completed his first major work (1921), whose English translation appeared in 1963 under the title The History of the Synoptic Tradition. The analysis quickly established Bultmann as a leading biblical scholar. It endorsed Martin Dibelius's idea that, if New Testament scholars were to further their understanding of the Gospel traditions, they would do well to adopt the form-critical methodology that Hermann Gunkel had successfully applied to Old Testament traditions. Focusing on diverse literary forms as the starting point of his investigation into the nature of the earliest Christian communities, Bultmann seriously questioned the assumptions of liberal theology that the historical Jesus was, in fact, knowable in the Gospel narrative. He regarded as untenable Harnach's view that the Gospel traditions contained the necessary data for constructing a trustworthy biographical portrait of Jesus. Thus, Bultmann insisted that the early church's apologetic, catechetical, and liturgical activities primarily dictated the shaping of the written Gospels..Although Bultmann's assertions evoked much opposition, they continue to influence how New Testament specialists perceive the Gospel. In his provocative essay New Testament and Mythology published in 1941, Bultmann sets forth his program for demythologizing the New Testament. He argues that the biblical message is mediated through a mythological framework that is alien to the worldview of modern humanity. He explains that the framers of New Testament myth were not attempting to describe the world objectively; rather, they were seeking to understand themselves within it. Thus, the demythologizing task that is incumbent on twentieth-century biblical interpreters is not to eliminate the myth but to perceive it existentially. The insight induces Bultmann to issue a creative restatement of the New Testament faith in existentialist categories drawn from Heidegger. If that procedure has not endeared him to readers who are less enthusiastic about Heidegger than he, few have faulted Bultmann's claim that the Christian gospel stands independent of the worldview in which it was originally shaped. The form criticism and demythologizing that are so central in Bultmann's hermeneutical agenda are readily discernible in his Theology of the New Testament. Bultmann died in 1976.

Paul Vs. James: What We've Been Missing in the Faith and Works Debate
Christopher Bruno
Paperback