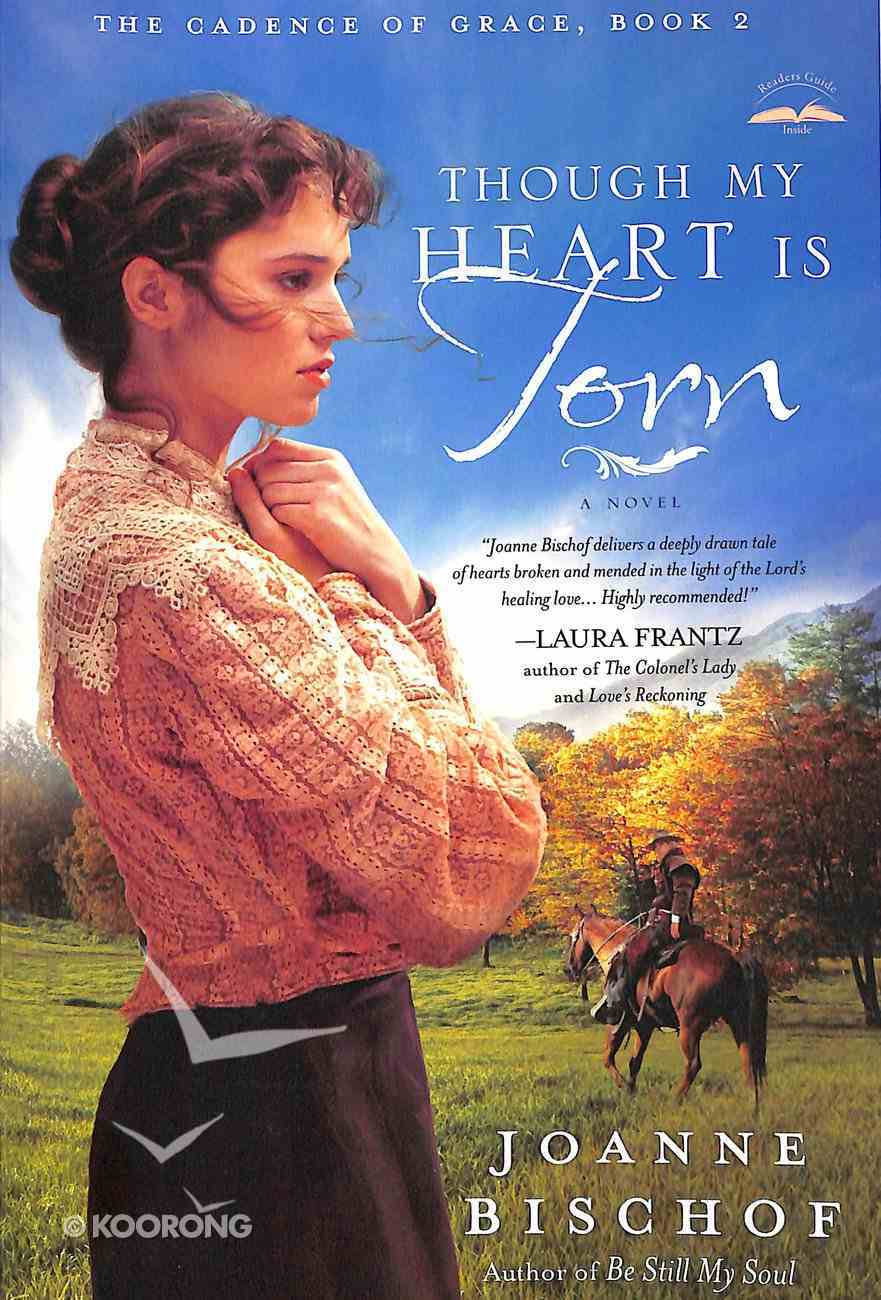 Gideon O’Riley has two wives—but he doesn’t know it.    Settling into a simple life in the majestic Blue Ridge mountains, Lonnie and Gideon O’Riley have finally found happiness after the rocky start to their marriage. The roguish bluegrass musician...

Gideon O’Riley has two wives—but he doesn’t know it.

Settling into a simple life in the majestic Blue Ridge mountains, Lonnie and Gideon O’Riley have finally found happiness after the rocky start to their marriage. The roguish bluegrass musician has fallen in love with his gentle wife and the God she serves, and Lonnie rests secure in his tenderness for her and their young son. A heartless ruse interupts their peace, bringing them back to Rocky Knob—and forces them to face the claims of Cassie Allan, a woman who says she is Gideon’s rightful wife.

As Gideon wades into the depths of his past choices, Lonnie is stunned by the revelations. She has no choice but to navigate this new path, knowing that surviving the devastating blow will take every ounce of strength  she has.

While Gideon’s guilt  and his bitterness towards Cassie threatens to burn up his fledgling faith, Lonnie wrestles to find the courage to trust the God who brought them together in the first place. Will their hard-earned love be able to conquer all?

Lonnie only wanted her husband’s love. Now that he belongs to another, can she surrender Gideon to a God with a bigger plan?
-Publisher

Joel Sawyer stared at his unwelcome guests in disbelief, the roomful of faces blurring. He stumbled back and sank onto the bench. His head fell against the wall behind him. “This can’t be,” he muttered.

“I’m afraid it is.” The reverend’s voice trembled worse than the shanty walls, which shook in the evening wind.

Joel closed his eyes. His jaw clenched, and heat rose up his neck. Gideon O’Riley was a dead man. If the task were up to him alone, he would see it done. Wanting to strike the boy, he curled his fingers against his leg, forming a fist so tight it threatened to turn his hand numb.

Opening his eyes, he tipped his chin and stared at the young woman who sat across from him. Cassie Allan, pretty girl. Her brown hair was stuffed into a tidy knot at the nape of her pale neck, hints of unruly curls tugging free. A glance into her eyes confirmed the trait ran deeper than appearances. Yes, unruly was the word. If only his daughter
were as cunning. He chewed the inside of his cheek until it burned. He glanced at the reverend. “So what’s to be done?”

The question hung heavily on the thick silence. On a bench near the fire, Bill O’Riley lowered his head, hat dangling between limp hands. Defeated. He’d yet to speak, and Joel doubted he would start now. Reverend Gardner shifted in his seat, bringing Joel’s attention back to the old man who was too short for his weight. More like a mole than a man. Joel disregarded the thought and forced himself to focus on the matter at hand. The reverend had stuttered his way through the unwelcome news and now sat fumbling with his hat, making Joel wish he could snatch it away, ring the sweat out, and hand it back.

The bedroom door creaked open, and Maggie emerged from the darkened room. Huddled on the bed, his children, shadowed in the light of a single candle, made scarcely a sound. Never had there been so many people in his house. It was crushing. Maggie stepped from the bedroom and closed the door softly behind her. She offered him a weak
smile.

“I apologize for the church’s oversight.” The reverend’s droning words were unsteady, and Joel’s mind hunted for the vital points. “We’d like to put this embarrassment behind us…”

Joel coughed. He tried to focus.

“There is no other choice but to remedy this. Gideon and your daughter must return…if we’re to repair the Allans’ honor.”

Glass clanged against metal. The reverend stopped and nodded to his hostess. With her eyes down, Maggie ducked her head and lit the oil lamp, fingers quick. After silently sliding the glass over the flame, she slipped from the room. The door closed without a sound behind her. One less person. If only Cassie and her pa would leave. Take Bill O’Riley
and their horrid news with them.

Joel felt the reverend’s gaze on him.

“We must find them.” In the candlelight, shadows haunted his face. Leaning forward, Joel rubbed his hands together. Grit ground between his palms. The mistake was Gideon’s—his foolish son-in-law who had deceived them all. The reverend rambled on, and Joel warred with the urge to backhand him. The church’s oversight. Hah! It bordered on criminal.

But Joel could not turn back time. Lonnie was already married to the scoundrel. And now they were asking him to get them home. Now. “And my daughter”—Joel ran a hand along the scruff of his jaw—“what’s to become of her?”

An unwelcome voice invaded the conversation. “It’s beside the point.”

“Gentlemen, please.” Gardner’s quivering hands reached for the space between the men.

Henry leaned back in his chair, his face filled with a brokenness that was beyond Joel.

Supper sat untouched on the table, and though the fire in the castiron stove had dwindled to meager coals, the smell of roast chicken still hung in the air. A cruel reminder of his empty stomach. If that weren’t rude enough, now Cassie’s father was giving him lip. At least Bill O’Riley was silent where he sat. The man hadn’t an argument to his name. Their children were heathens, the pair of them. The truth made Joel shift in his seat, disgust sliding through his veins.

Joel rubbed his knuckles together to loosen the tension that swept through the rigid muscles in his arm. “Lonnie’s my oldest girl, and—”

“And what of my oldest girl? Abandoned.” Henry’s last word slipped out in a pained whisper, and he stood, sending his chair tilting. His hands, now balled into fists, shook with each word. “Think of the pain my Cassie has endured these last months.”

The young woman rolled her eyes, the wayward motion tipping Joel’s head back. If she were his daughter, he’d smack the look off her face. But Henry Allan was too busy gaining the reverend’s sympathy to notice. Let him have it. Joel had no desire to fight for Lonnie’s innocence.

It didn’t exist. They had all been fooled.

He should have expected it from Gideon. The wretch whom less than an hour ago he had still considered family. And look where it landed him. Joel glanced at the reverend, ignoring the man who hovered angrily beside them. He was finished with Henry Allan for the evening.

They should pass it off, wash their hands of this disgrace. “Surely this situation is better suited for the law.”

The reverend cleared his throat, and Joel realized he’d spoken his thought aloud.

“We would. But we wanted to bring it to you first.” As if he’d mustered some unseen strength, Reverend Gardner’s beady eyes bored so deep into Joel’s that Joel found himself shifting. Again. “It seems that if all parties involved can come to an agreement of peace, we needn’t bring in any outside aid…and the trouble it would bring. We need only
resolve the matter and see that the proper documents are in the hand of the circuit rider the next time he journeys on courthouse business.”

“So, now I need to get them home. Is that it? Is there anything else I should know?” Joel clipped the words off, not caring if his mood leaked through. “What of the child?” he nearly spat.

The reverend’s eyes filled with sorrow as they met his. “Will be your responsibility, I’m afraid.”

He should have known.

The reverend’s face grew somber. “It must be done. You must send word…bid them home immediately.” He slid his hat on and rose slowly. “Or the Allans will indeed involve the law. Something, I believe, neither of us wants.” His fat throat worked. “I’d imagine that having the law knocking on your doorstep, asking questions, isn’t desired.” Firelight
drew the shadows long across his face. “The law has a way of…unearthing things.”

Irritation shot through him that the reverend knew of the accusations. The rumors. Joel would deny the stories until his last breath. But still…a man of the law knew how to hunt for truths best left buried deep. He had no desire to test that.

He stepped toward the door, which was rattling on its hinges in the windstorm that beat against the house. With a single nod, Bill O’Riley rose from his bench and quickly bid the room goodnight in a husky voice.

The reverend held the door open and, with a stiff nod, motioned for the Allans. Cassie stepped out first, clutching her shawl, which fluttered and slapped with a life of its own. Joel caught the glint of her eyes in the moonlight. Her pa followed close on her heels. The wind howled. Henry Allan glanced back over his shoulder, pinning Joel with a fierce
stare before pulling his hat over hair the color of dirty snow.

The reverend hesitated and turned toward Joel. A gust of wind burst into the house, clawing its chilly fingers through Joel’s thin shirt. “Mr. Sawyer. Again, please know that I am sorry. This, uh, sort of thing does not happen…often.”