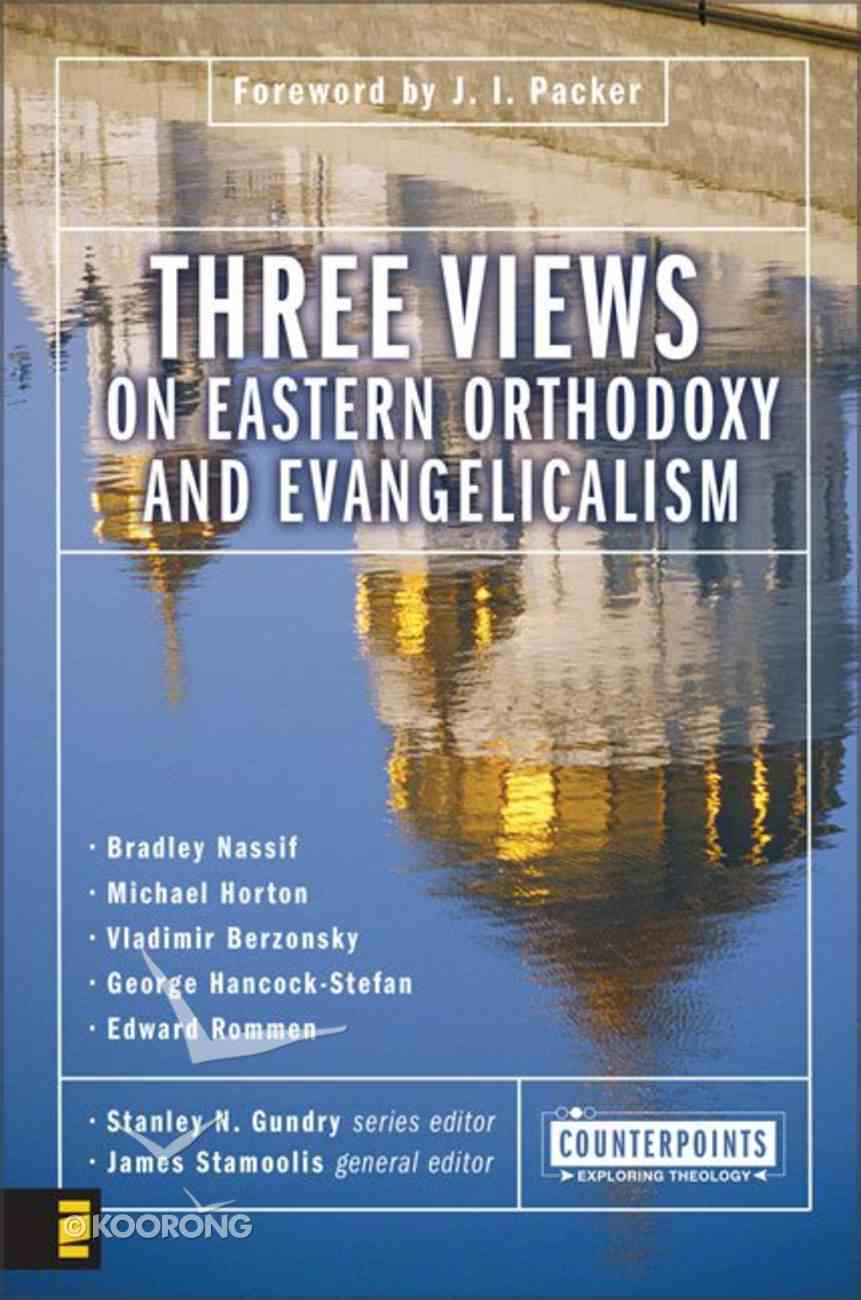 A fascinating look at both Eastern Orthodoxy and evangelicalism to uncover similarities and differences in the two traditions. To some Western evangelicals, the practices of Eastern Orthodoxy seem mysterious and perhaps even unbiblical. Then again, from an Orthodox perspective,...

A fascinating look at both Eastern Orthodoxy and evangelicalism to uncover similarities and differences in the two traditions.

To some Western evangelicals, the practices of Eastern Orthodoxy seem mysterious and perhaps even unbiblical. Then again, from an Orthodox perspective, evangelicals lack the spiritual roots provided by centuries-old church traditions. Are the differences between these two branches of Christianity so sharp that to shake hands is to compromise the gospel itself? Or is there room for agreement? Are Eastern Orthodoxy and evangelicalism at all compatible?

Yes, no, maybe - this book allows five leading authorities to present their different views, have them critiqued by their fellow authors, and respond to the critiques. Writing from an Orthodox perspective with a strong appreciation for evangelicalism, Bradley Nassif makes a case for compatibility. Michael Horton and Vladimir Berzonsky take the opposite stance from their respective evangelical and Orthodox backgrounds. And George Hancock-Stefan (evangelical) and Edward Rommen (Orthodox) each offer a qualified "perhaps."

The interactive Counterpoints forum is ideal for comparing and contrasting the different positions to understand the strengths and weaknesses of these two important branches of Christianity and to form a personal conclusion regarding their compatibility. 304 pages, from Zondervan.

Three Views on Eastern Orthodoxy and Evangelicalism Copyright 2004 by James J. Stamoolis Requests for information should be addressed to: Zondervan, Grand Rapids, Michigan 49530 Library of Congress Cataloging-in-Publication Data Three views on Eastern Orthodoxy and evangelicalism / James J. Stamoolis, general editor ; contributors, Bradley Nassif . . . [et al.].-1st ed. p. cm.- (Counterpoints) Includes bibliographical references and index. ISBN 0-310-23539-1 1. Evangelicalism-Relations-Orthodox Eastern Church. 2. Orthodox Eastern Church-Relations-Evangelicalism. I. Stamoolis, James J. II. Nassif, Bradley. III. Counterpoints (Grand Rapids, Mich.) BX324.5.T48 2004 280'.042-dc22 2004007130 All Scripture quotations, unless otherwise indicated, are taken from the Holy Bible, New International Version. NIV. Copyright 1973, 1978, 1984 by International Bible Society. Used by permission of Zondervan. All rights reserved. Scripture quotations marked NKJV are taken from The New King James Bible Version. Copyright 1979, 1980, 1982, Thomas Nelson, Inc. All rights reserved. No part of this publication may be reproduced, stored in a retrieval system, or transmitted in any form or by any means-electronic, mechanical, photocopy, recording, or any other-except for brief quotations in printed reviews, without the prior permission of the publisher. Printed in the United States of America 04 05 06 07 08 09 10 /? DC/10 9 8 7 6 5 4 3 2 1 Chapter One ARE EASTERN ORTHODOXY AND EVANGELICALISM COMPATIBLE? YES The Evangelical Theology of the Eastern Orthodox Church Bradley Nassif ARE EASTERN ORTHODOXY AND EVANGELICALISM COMPATIBLE? YES The Evangelical Theology of the Eastern Orthodox Church Bradley Nassif SETTING THE STAGE: A PERSONAL WORD If postmodernism has taught us anything, it has made us aware that we always interpret reality through the eyes of our own history-our family upbringing, educational background, cultural context, and religious community. My background is deeply rooted in the Eastern Orthodox tradition. I am a Lebanese Christian who grew up in America in the Antiochian Orthodox Church (formally named the Greek Orthodox Church of Antioch and All the East, whose patriarch resides in Damascus, Syria). It is among the most ancient and revered patriarchates in the Orthodox world, dating back to the great christological controversies of the fourth and fifth centuries-and even back to the first century, where the New Testament reports in Acts 11:26 that "the disciples were called Christians first at Antioch." The late Father John Meyendorff was my doctoral mentor with whom I specialized in Greek patristic theology and exegesis. I am also deeply indebted to evangelical Christians who helped bring me into a personal relationship with Jesus Christ during my high school years. Over the past decade I have been a visiting or adjunct professor of Orthodox studies at leading evangelical schools such as Fuller Theological Seminary, Regent College, Trinity Evangelical Divinity School, and The Southern Baptist Theological Seminary. Much of my work has been devoted to introducing evangelical students and faculty to the riches of the Eastern Orthodox tradition, and many of these evangelicals have become friends and colleagues. In the early 1990s I founded a Pan-Orthodox, Pan-Evangelical organization named the Society for the Study of Eastern Orthodoxy and Evangelicalism. For the past decade we've held annual meetings to explore the areas of convergence and divergence between our two traditions. I share these brief biographical excerpts because readers may appreciate knowing that I have not just thought about Orthodox and evangelical compatibility, but I've lived it mos
-Publisher

Edward Rommen (D.Theol., University of Munich; D.Miss., Trinity Evangelical Divinity School) is an Orthodox priest and pastor of Holy Transfiguration Orthodox Mission in Raleigh, North Carolina. He is the coauthor of Contextualization: Meanings, Methods, and Models.

Vladimir Berzonsky (D.Min., Ashland Theological Seminary) is pastor of Holy Trinity Orthodox Church in Parma, Ohio, and the author of The Gift of Love and In the Image and Likeness of God.

Bradley Nassif (PhD, Fordham University) is a professor of Biblical and Theological Studies at North Park University, Chicago, IL. He is the co-editor of The Philokalia: Exploring a Classic Text of Orthodox Spirituality and general editor of New Perspectives on Historical Theology: Essays in Memory of John Meyendorff.