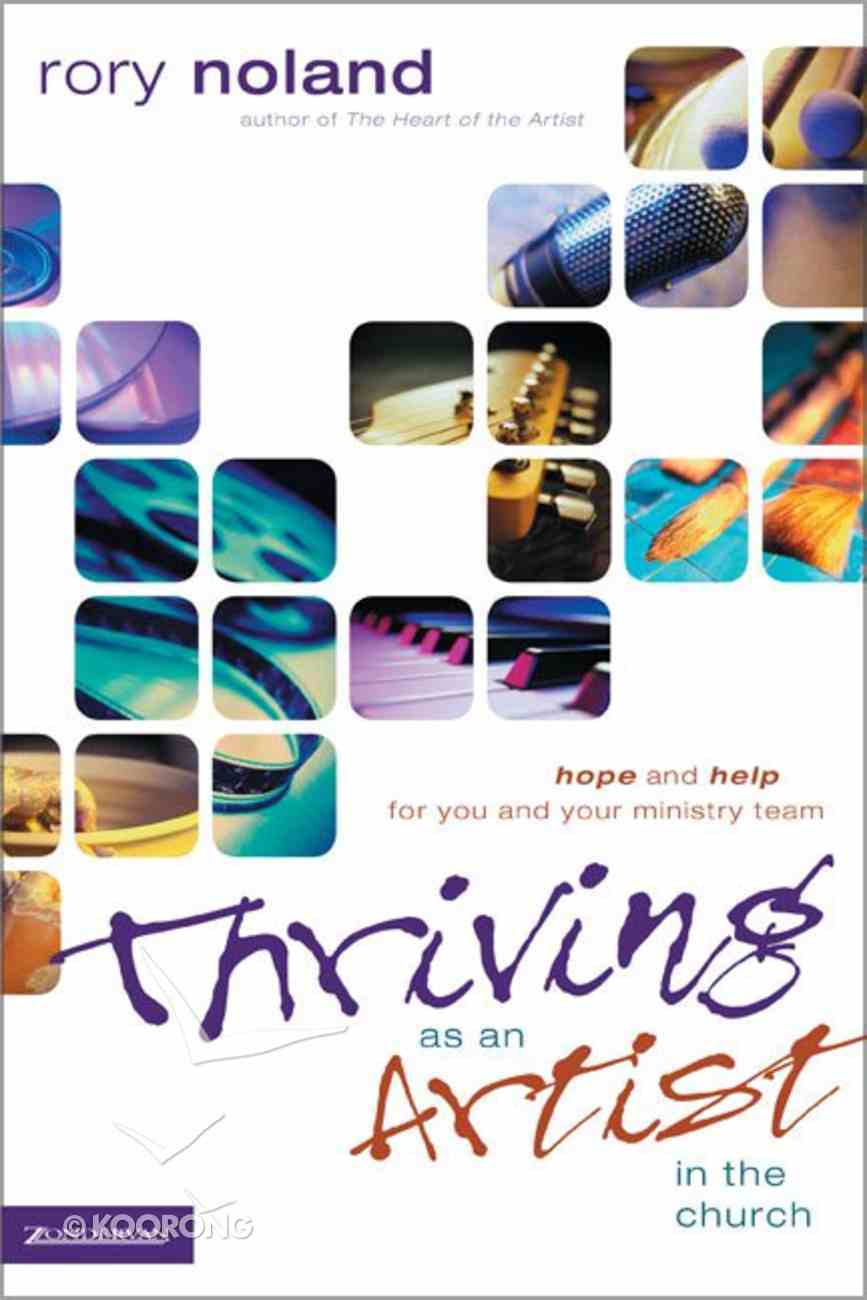 Thriving as An Artist in the Church

Thriving as An Artist in the Church
eBook

The Heart of the Artist, Second Edition
Rory Noland
eBook

An Hour on Sunday
eBook

Thriving as an Artist in the Church Copyright 2004 by Willow Creek Association Requests for information should be addressed to: Zondervan, Grand Rapids, Michigan 49530 Library of Congress Cataloging-in-Publication Data Noland, Rory. Thriving as an artist in the church : hope and help for you and your ministry team / Rory Noland.-1st ed. p. cm. Includes index. ISBN 0-310-25732-8 (pbk.) 1. Church musicians-Religious life. 2. Artists-Religious life. 3. Christian life. I. Title. BV4596.M87N654 2004 248.8'8-dc22 2004015683 All Scripture quotations, unless otherwise indicated, are taken from the Holy Bible: New International Version. NIV. Copyright 1973, 1978, 1984 by International Bible Society. Used by permission of Zondervan. All rights reserved. Scripture quotations marked (TNIV) are taken from the Holy Bible: Today's New International Version . TNIV. Copyright 2002, 2004 by International Bible Society. Used by permission of Zondervan. All rights reserved. Scripture quotations marked (NLT) are taken from the Holy Bible, New Living Translation, copyright 1996. Used by permission of Tyndale House Publishers, Inc., Wheaton, IL 60189 USA. All rights reserved. Scripture quotations marked (NASB) are taken from the New American Standard Bible, Copyright 1960, 1962, 1963, 1968, 1971, 1972, 1973, 1975, 1977 by The Lockman Foundation. Used by permission. Scripture quotations marked (MSG) are taken from THE MESSAGE. Copyright by Eugene H. Peterson 1993, 1994, 1995, 1996, 2000, 2001, 2002. Used by permission of NavPress Publishing Group. The poem "Salvation" by Scott Cairns is reprinted from Philokalia: New and Selected Poems, by permission of Scott Cairns and Zoo Press. All rights reserved. No part of this publication may be reproduced, stored in a retrieval system, or transmitted in any form or by any means-electronic, mechanical, photocopy, recording, or any other-except for brief quotations in printed reviews, without the prior permission of the publisher. Interior design by Tracey Moran Printed in the United States of America 04 05 06 07 08 09 /. DC/ 10 9 8 7 6 5 4 3 2 1 We want to hear from you. Please send your comments about this book to us in care of zreview@zondervan.com. Thank you. introduction: It's Not Easy Being an Artist in the Church Could you reach deep in yourself to locate that organ containing delusions about your general size in the world-could you lay hold of this and dredge it from your chest and look it over in daylight-well, it's no wonder people would rather not. Leif Enger, Peace Like a River In music school, I studied composition with an accomplished composer whom I deeply admired and respected. He knew I was involved in the music ministry at my church, but we rarely talked about it. Except, that is, for one brief moment near the end of my college career. During one of my lessons, several sheets of score paper accidentally fell out of my folder and onto the floor. As I gathered them up, my professor quickly noticed there was music he didn't recognize written on these sheets. When I explained the music was something I was working on for church, he grimaced and said, "I thought you would have gotten this church thing out of your system by now." I shrugged my shoulders because I didn't know what to say. Then he asked, "Why would anyone waste their time doing church music?" That's an interesting question, isn't it? It's one I've asked myself often over the years. Why would an artist opt to share his or her talents with the church? After all, that's not usually the first place people think of when it comes to excellence or innovation in the arts. It's certainly not the place most artists think of when they dream about where they hope to express their talent. In fact, many artists are apprehensive about the church. They're afraid it might stifle or limit them, and they are concerned that church people won't accept or even un
-Publisher