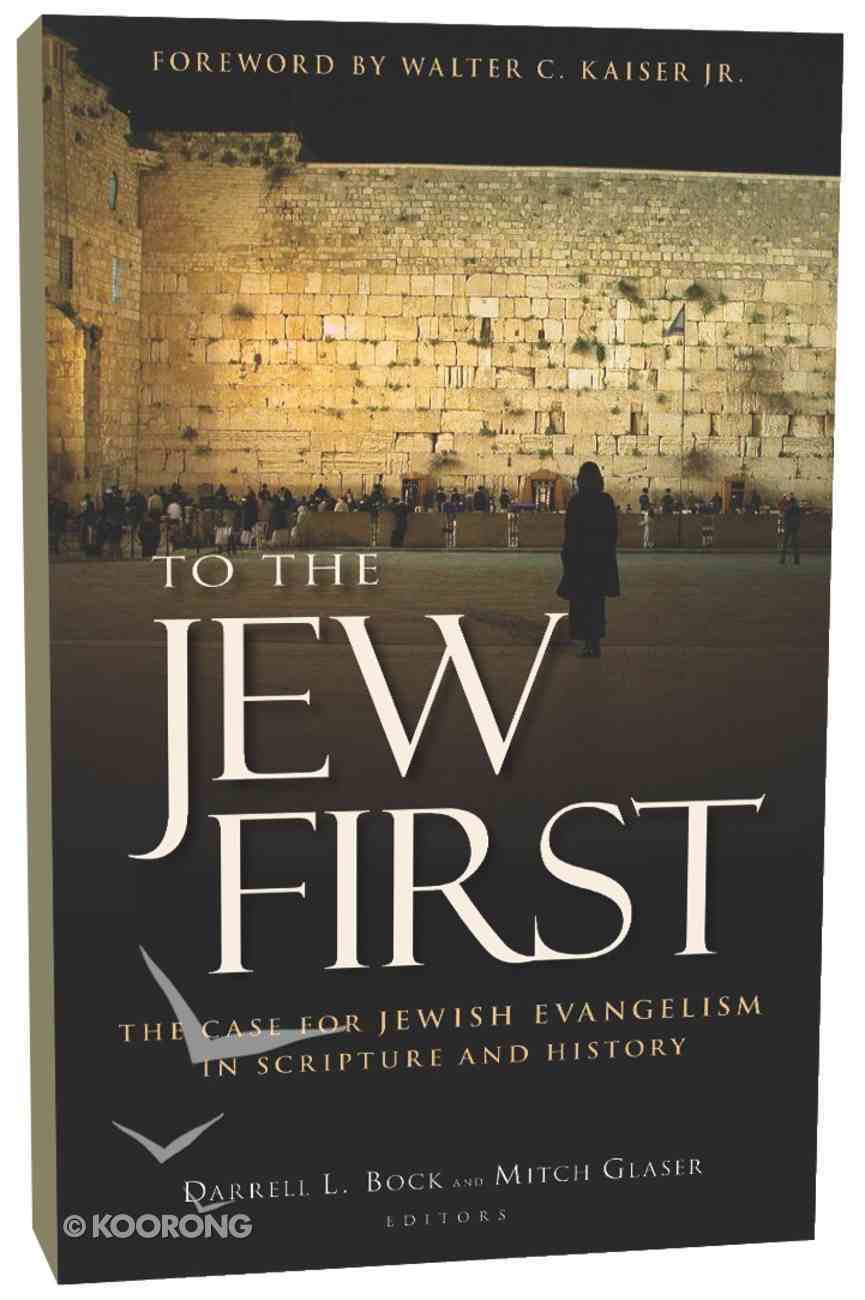 To the Jew First

This book brings together 14 eminent evangelical scholars to examine the biblical, theological, and historical motivations for evangelistic outreach to the Jewish community. This is an encouraging resource for Christians who take seriously the biblical mandate to bring the gospel...

This book brings together 14 eminent evangelical scholars to examine the biblical, theological, and historical motivations for evangelistic outreach to the Jewish community. This is an encouraging resource for Christians who take seriously the biblical mandate to bring the gospel 'to the Jew first'. 352 pages, from Kregel.

Based upon the biblical mandate to take the gospel "to the Jew first," there has been a renewed effort among Christians to bring the gospel of Jesus to the Jewish community. This comprehensive resource looks at the historical, theological, and biblical context for doing so, and provides encouragement for Christians and Messianic Jews engaged in evangelism. "To the Jew First" includes contributions by Richard A. Averbeck, Craig A. Blaising, Walter C. Kaiser, Richard L. Pratt Jr., and ten other evangelical scholars.
-Publisher

"For I am not ashamed of the gospel, for it is the power of God for salvation to everyone who believes, to the Jew first and also to the Greek." (Rom. 1: 16 esv) Organized around the biblical mandate in Romans 1: 16, To the Jew First is a comprehensive look at the biblical, theological, historical, and practical basis for Jewish evangelism. Featuring the scholarship of leading North American theologians--representing a range of theological views--it stands to become a widely used textbook and definitive resource for pastors, missionaries, and evangelists. Contributors Richard A. Averbeck Craig A. Blaising Darrell L. Bock J. Lanier Burns Arnold G. Fruchtenbaum Mitch Glaser Arthur F. Glasser Walter C. Kaiser Jr. Kai Kjaer-Hansen Barry R. Leventhal Richard L. Pratt Jr. Michael Rydelnik Mark A. Seifrid David L. Turner Topics Discussed Part I, Bible, explores the meaning of Paul's phrase "to the Jew first," the role of Israel in God's overarching plan of salvation, Jewish evangelism in the book of Acts, the relationship between evangelism and Jesus' arguments with Jewish leaders, the work of the Holy Spirit in evangelism, and more. Part II, Theology, examines the future of Israel, the church's stance toward Jewish evangelism in a post-Holocaust world, the gospel for the Jews from both a Dispensational and Reformed perspective, the theological implications of "to the Jew first," and more. Part III, Mission, first looks at the history of Jewish missions in the past century; it then treats the missiological dimensions and importance of Jewish evangelism, as well as the gospel's ramifications for both Jew and Gentile.Darrell L. Bock (Ph.D., University of Aberdeen) is research professor of New Testament studies at Dallas Theological Seminary. A former president of the Evangelical Theological Society, he is the author of numerous works in New Testament studies, including notable commentaries on Luke and Acts. Mitch Glaser (Ph.D., Fuller Seminary) is the president of Chosen People Ministries. Mitch studied with the esteemed Charles Feinberg at Talbot School of Theology. A Messianic Jew, he has labored for more than thirty years in ministry among the Jewish people. His doctorate is in intercultural studies.
-Publisher

Mitch Glaser is the president of Chosen People Ministries. Mitch and his wife, Zhava, are Jewish believers in Jesus and have each labored for more than twenty years in ministry among the Jewish people. Mitch holds a Ph.D. in Intercultural Studies. A

Let the Nations Be Glad!: The Supremacy of God in Missions (Third Edition)
John Piper
Paperback