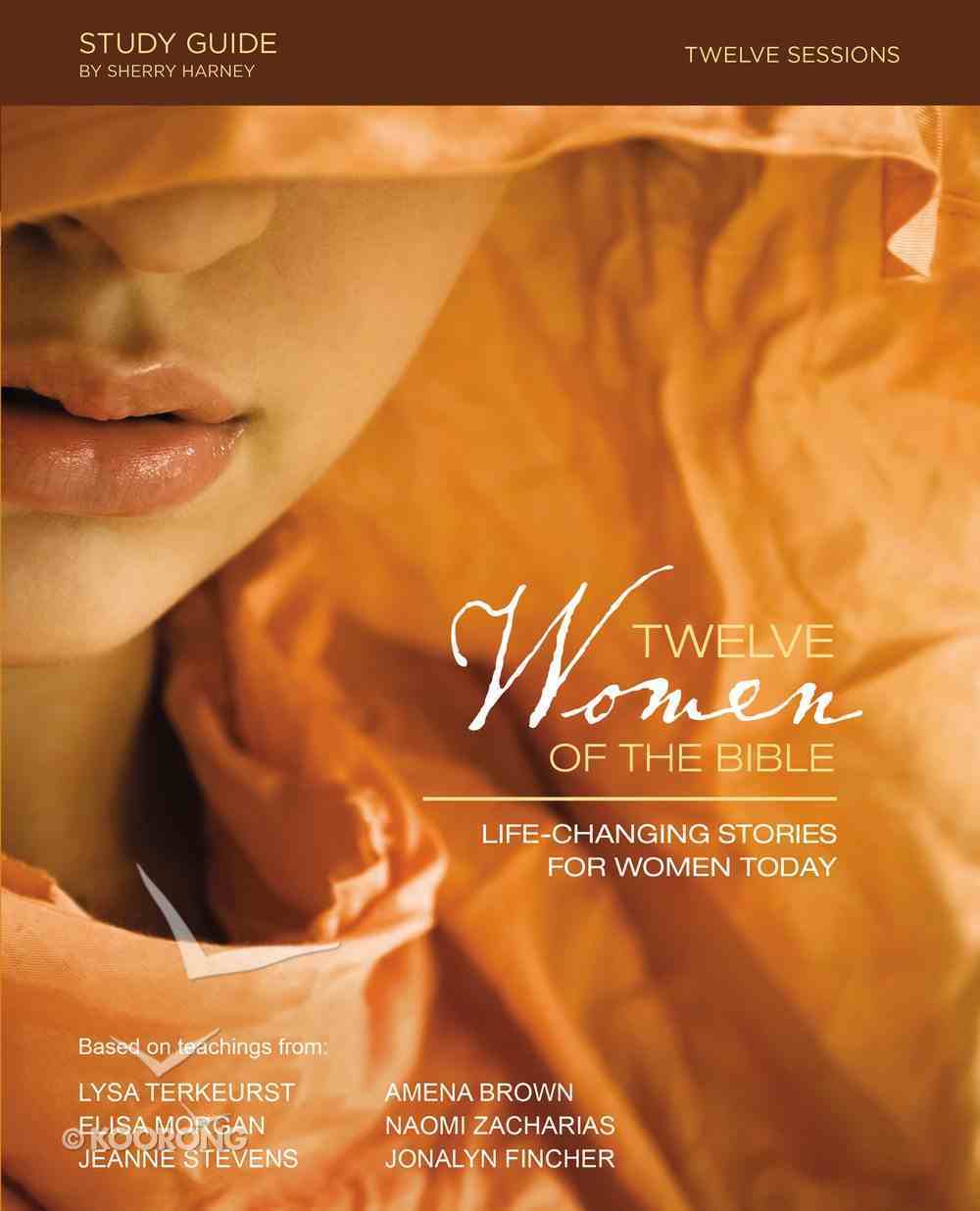 : In this 12-session small group Bible study, Twelve Women of the Bible , Lysa TerKuerst, Elisa Morgan, Jeanne Stevens and other leaders look at the spiritual lessons learned from twelve biblical women and what they mean for your life...

:
In this 12-session small group Bible study, Twelve Women of the Bible, Lysa TerKuerst, Elisa Morgan, Jeanne Stevens and other leaders look at the spiritual lessons learned from twelve biblical women and what they mean for your life today.


You'll learn about the triumphs and failures of Mary Magdalene, Rebekah, Hannah, and nine other women, studying their lives and learning how to:

Apply biblical lessons to their own modern-day struggles Live through their failures as well as successes Draw near to God in a world filled with trials Find lasting contentment Overcome rejection and insecurity and much more
Each of the 12 sessions focuses on one biblical character. You'll also discover lessons from each of these women that will help you persevere through the circumstances you are facing today.


This Study Guide features discussion questions, background information on each character, space to write down thoughts, a helpful Leader's Guide, and much more. It is designed for use with the Twelve Women of the Bible DVD (sold separately).

Jeanne Stevens serves as one of the lead pastors at Soul City Church in Chicago, IL (www.soulcitychurch.com) Before starting Soul City Church Jeanne has been blessed to work with 2 amazing churches. Jeanne was on staff at Willow Creek Community Church from 1995 to 2005 where she served as a Student Ministry Pastor. She was also in leadership at North Point Community Church in Atlanta, GA from 2006 2009. Jeanne has been privileged to be able to write, consult, and train ministry leaders throughout the country. Jeanne is an engaging communicator and leader that is committed to helping people liv

Amena Brown is a poet, speaker, journalist and event host from Atlanta, Georgia. The author of a chapbook and two spoken word CDs, Brown has performed and spoken at events across the nation such as The RightNow Conference, Creativity World Forum, Catalyst Conference, Chick-fil-A Leadercast, the 2008 National Poetry Slam Competition, as well as touring with Gungor.She and her husband, Matt "DJ Opdiggy" Owen travel and perform "God.Rhyme.Reason." a presentation of poetry, monologue and deejaying on doubt, faith and hope. Brown is also journalist for numerous blogs, magazines and newspapers in the Atlanta area.

Naomi Zacharias graduated from Wheaton College. After working in sales for Coca-Cola, she joined RZIM and launched Wellspring International, an initiative devoted to providing financial grants to international efforts working with at-risk women and children.
Naomi has spent time in red-light districts in The Netherlands, India and Thailand; foster homes for children affected by HIV/AIDS throughout Asia; hospitals providing surgical treatment for women who have been victims of violence in the Congo; womens prisons in South Africa; displacement camps in Indonesia, Uganda and Pakistan; areas of the Middle East offering aid to Iraqi refugees; and areas of Southeast Asia devastated by the tsunami of 2004. Naomi currently lives with her golden retriever, India.


She is the author of The Scent of Water: Discovering What Remains

Jonalyn Grace Fincher offers a distinctive voice as a female apologist. Holding a master's degree in philosophy of religion and ethics from Talbot School of Theology, as well as double bachelor's degrees in English and history from the University of Virginia, she is one half of Soulation (www.soulation.org), a husband/wife apologetics team. For the last three years Jonalyn has been lecturing, speaking and writing on how women are distinctly and fully made in God's image. Her work has appeared in Radiant, Fullfill and UnChristian: What a New Generation Really Thinks about Christianity. She regu