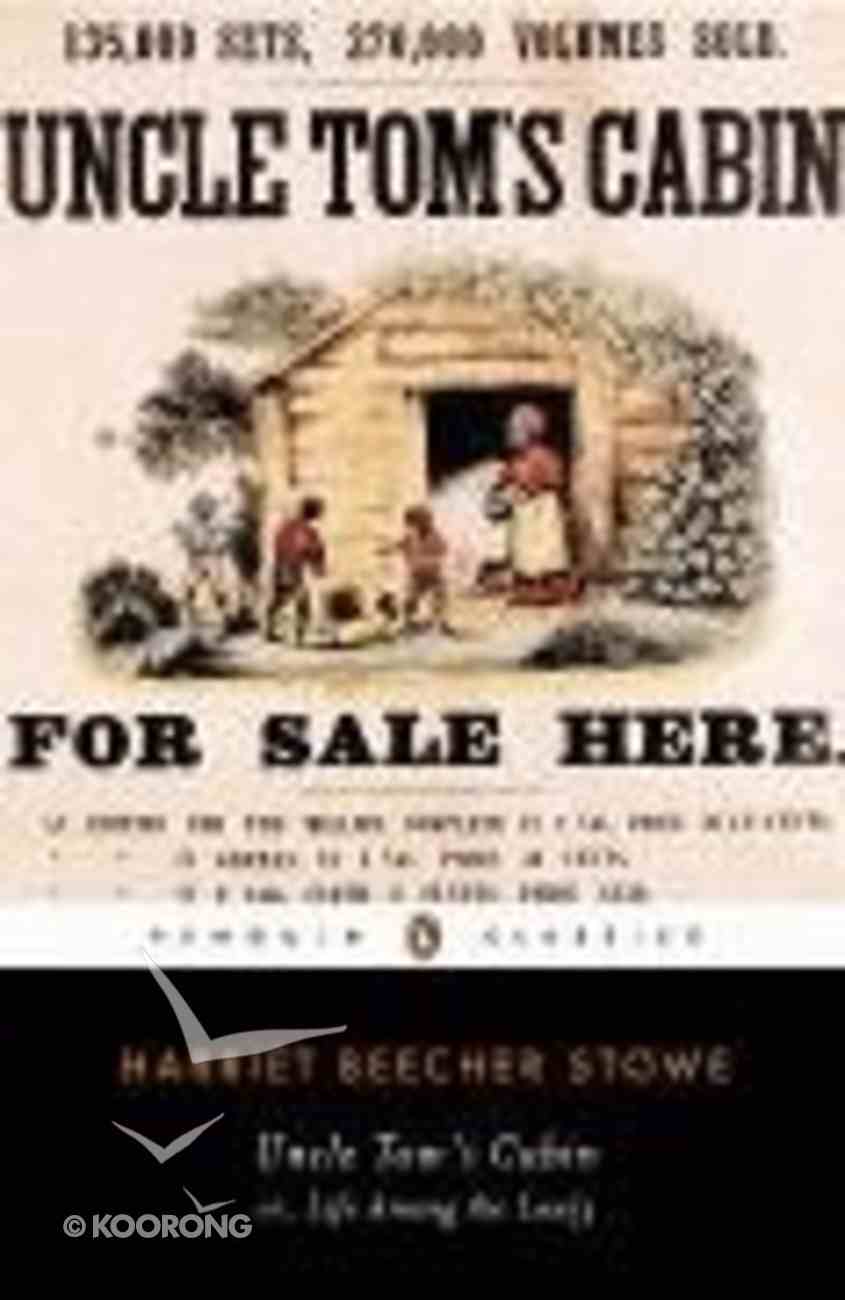 Uncle Tom's Cabin Or Life Among the Lowly

Harriet Beecher Stowe was born in Litchfield, Connecticut, on June 14, 1811, the seventh child of Lyman and Roxanna Foote Beecher. Her family produced a number of religious leaders, teachers, and reformers, focusing on abolitionism as one of their chief...

Into the Free
Julie Cantrell
Paperback

The End of the Magi
Patrick W Carr
eBook

Into the Free
Julie Cantrell
eBook

The End of the Magi
Patrick W Carr
Paperback

Harriet Beecher Stowe was born in Litchfield, Connecticut, on June 14, 1811, the seventh child of Lyman and Roxanna Foote Beecher. Her family produced a number of religious leaders, teachers, and reformers, focusing on abolitionism as one of their chief causes. At thirteen, Stowe was sent away to school in Hartford. In 1832 she rejoined her family in Cincinnati, where her father ran the Lane Theological Seminary, and began work at her sister Catherine's school for girls. Her proximity to Kentucky, a slave state, made her and her family increasingly aware of the horrors of slavery, which they protested vehemently. In 1836 she married Calvin Ellis Stowe, and soon after that began her family. The Stowes had seven children: twins Harriet and Eliza, Henry, Frederic, Georgiana, Samuel, and Charles. In 1843 Stowe published her first book, The Mayflower. She continued to teach and write after its publication, and in 1852 she published her bestselling classic, Uncle Tom's Cabin, the first novel to criticize the institution of American slavery. Her instant success prompted the Independent magazine in New York to offer her a position, and she was asked to tour England where she was received by Queen Victoria. In 1853 she published A Key to Uncle Tom's Cabin, a book on the sources of her popular novel. Stowe lectured and wrote for twenty-five years before slipping into the chronic illness and senility that began in 1878. She died on July 1, 1896 and was buried in Andover, Massachusetts.
-Publisher

A powerful indictment of slavery by America's first major woman novelist, Uncle Tom's Cabin was hailed by Tolstoy as "one of the greatest productions of the human mind." Published in 1852, Uncle Tom's Cabin brought the abolitionist's message to the White House and beyond-no woman before or since Harriet Beecher Stowe has so successfully written a novel designed to motivate America to act on a major issue of the day. Controversial still, this novel has weathered continual debates on all aspects of its writing and its subject matter. In her eloquent Introduction, Ann Douglas establishes the historical and literary significance of Uncle Tom's Cabin, the accuracy in its portrayal of the slave experience, the brilliance in its narrative structure and use of dialogue, and its profoundly feminist implications.
-Publisher

Perhaps the most powerful document in the history of American abolitionism, this controversial novel goaded thousands of readers to take a stand on the issue of slavery and played a major political and social role in the Civil War period.
-Publisher

:Late in the afternoon of a chilly day in February, two gentlemen were sitting alone
over their wine, in a well-furnished dining parlor, in the town of P&#8212;, in Kentucky.
There were no servants present, and the gentlemen, with chairs closely
approaching, seemed to be discussing some subject with great earnestness.

For convenience sake, we have said, hitherto, two gentlemen. One of the parties,
however, when critically examined, did not seem, strictly speaking, to come under
the species. He was a short, thick-set man, with coarse, commonplace features, and
that swaggering air of pretension which marks a low man who is trying to elbow his
way upward in the world. He was much over-dressed, in a gaudy vest of many
colors, a blue neckerchief, bedropped gayly with yellow spots, and arranged with a
flaunting tie, quite in keeping with the general air of the man. His hands, large and
coarse, were plentifully bedecked with rings; and he wore a heavy gold
watch-chain, with a bundle of seals of portentous size, and a great variety of colors,
attached to it,&#8212;which, in the ardor of conversation, he was in the habit of
flourishing and jingling with evident satisfaction. His conversation was in free and
easy defiance of Murray's Grammar, and was garnished at convenient intervals with
various profane expressions, which not even the desire to be graphic in our account
shall induce us to transcribe.

His companion, Mr. Shelby, had the appearance of a gentleman; and the
arrangements of the house, and the general air of the housekeeping, indicated easy,
and even opulent circumstances. As we before stated, the two were in the midst of
an earnest conversation.

'That is the way I should arrange the matter,' said Mr. Shelby.

'I can't make trade that way&#8212;I positively can't, Mr. Shelby,' said the other, holding
up a glass of wine between his eye and the light.

'Why, the fact is, Haley, Tom is an uncommon fellow; he is certainly worth that sum
anywhere&#8212;steady, honest, capable, manages my whole farm like a clock.'

'You mean honest, as niggers go,' said Haley, helping himself to a glass of brandy.

'No; I mean, really, Tom is a good, steady, sensible, pious fellow. He got religion at
a camp-meeting, four years ago; and I believe he really did get it. I've trusted him,
since then, with everything I have,&#8212;money, house, horses,&#8212;and let him come and
go round the country; and I always found him true and square in everything.'

'Some folks don't believe there is pious niggers, Shelby,' said Haley, with a candid
flourish of his hand, 'but I do. I had a fellow, now, in this yer last lot I took to
Orleans&#8212;'twas as good as a meetin', now, really, to hear that critter pray; and he was
quite gentle and quiet like. He fetched me a good sum, too, for I bought him cheap
of a man that was 'bliged to sell out; so I realized six hundred on him. Yes, I consider
religion a valeyable thing in a nigger, when it's the genuine article, and no mistake.'

'Well, Tom's got the real article, if ever a fellow had,' rejoined the other. 'Why, last
fall, I let him go to Cincinnati alone, to do business for me, and bring home five
hundred dollars. 'Tom,' says I to him, 'I trust you, because I think you're a
Christian&#8212;'I know you wouldn't cheat.' Tom comes back, sure enough; I knew he
would. Some low fellows, they say, said to him&#8212;'Tom, why don't you make tracks
for Canada?' 'Ah, master trusted me, and I couldn't'&#8212;they told me about it. I am sorry
to part with Tom, I must say. You ought to let him cover the whole balance of the
debt; and you would, Haley, if you had any conscience.'

'Well, I've got just as much conscience as any man in business can afford to
keep,&#8212;just a little, you know, to swear by, as 'twere,' said the trader, jocularly; 'and
then, I'm ready to do anything in reason to 'blige friends; but this yer, you see, is a
leetle too hard on a fellow&#8212;a leetle too hard.' The trader sighed contemplatively, and
poured out some more brandy.

'Well, then, Haley, how will you trade?' said Mr. Shelby, after an uneasy interval of
silence.

'Well, haven't you a boy or gal that you could throw in with Tom?'

'Hum!&#8212;none that I could well spare; to tell the truth, it's only hard necessity makes
me willing to sell at all. I don't like parting with any of my hands, that's a fact.'

Here the door opened, and a small quadroon boy, between four and five years of
age, entered the room. There was something in his appearance remarkably beautiful
and engaging. His black hair, fine as floss silk, hung in glossy curls about his
round, dimpled face, while a pair of large dark eyes, full of fire and softness, looked
out from beneath the rich, long lashes, as he peered curiously into the apartment. A
gay robe of scarlet and yellow plaid, carefully made and neatly fitted, set off to
advantage the dark and rich style of his beauty; and a certain comic air of
assurance, blended with bashfulness, showed that he had been not unused to
being petted and noticed by his master.