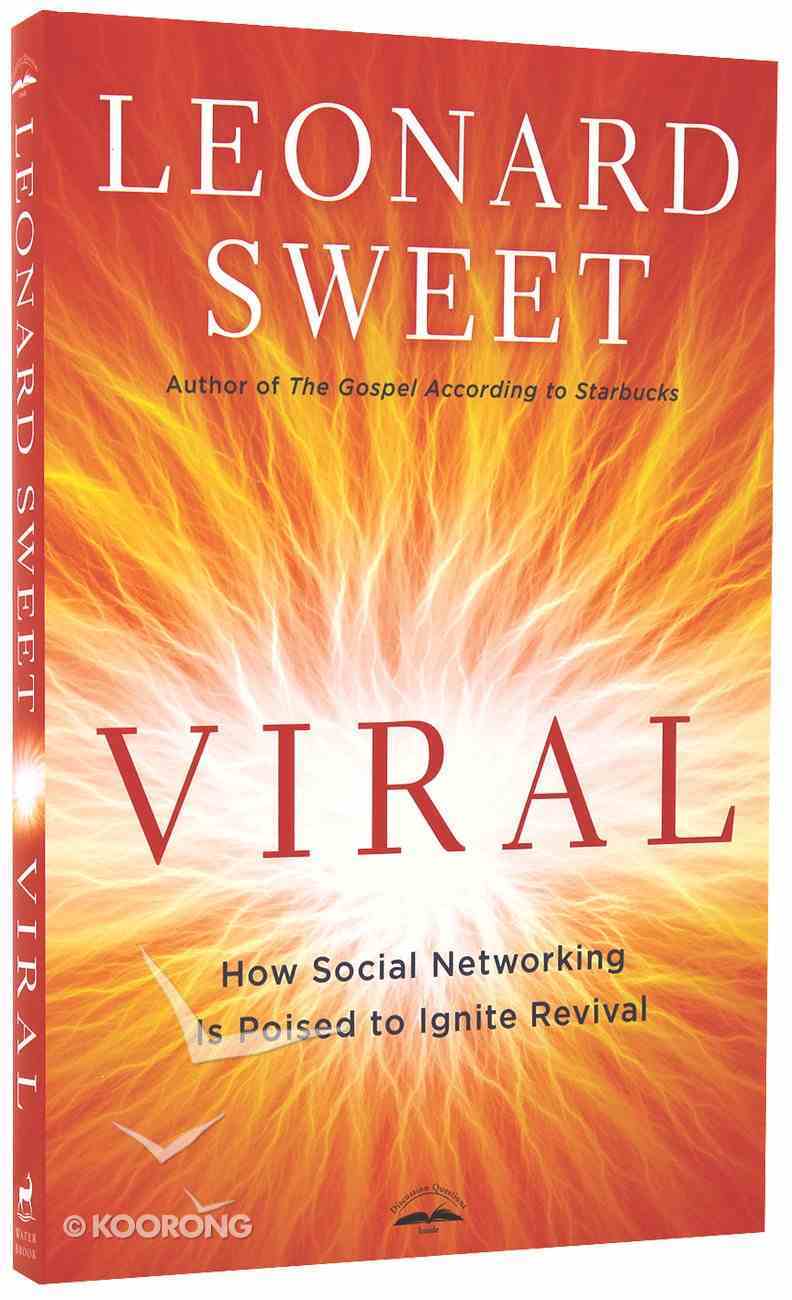 The gospel is nothing without relationship. And no one gets it like the Google Generation. God came to earth to invite us, personally, into a relationship. And while Christians at times downplay relationships, the social-media generation is completely sold...

The Gospel According to Starbucks
Leonard Sweet
eBook

What Matters Most
Leonard Sweet
eBook

The gospel is nothing without relationship. And no one gets it like the Google Generation.

God came to earth to invite us, personally, into a relationship. And while Christians at times downplay relationships, the social-media generation is completely sold on the idea. In Viral, Leonard Sweet says Christians need to learn about connecting with others from the experts - those who can't seem to stop texting, IM-ing, tweeting, and updating their Facebook statuses. What would happen, he asks, if Christians devoted less attention to strategies and statistics and paid more attention to pursuing relationships?

The current generation is driven by a God-given desire to know others and to be known by others. Most of them, in seeking to connect in meaningful ways, have found a place of belonging that is outside the organized church. Why not bring the two together?

Those who are sold out to relationships can teach Christians how to be better friends to people who need God. At the same time, members of the social-media generation can learn how to follow their desire for belonging, straight into the arms of God. It's time for relationship to be restored to the heart of the gospel. And when that happens, can revival be far behind?

Leonard Sweet (PhD., University of Rochester), is founder and president of SpiritVenture Ministries and serves as the E. Stanley Jones Professor of Evangelism at Drew Theological School in Madison, New Jersey. He also is a Distinguished Visiting Professor at George Fox University in Newberg, Oregon, and the chief writer for preachingplus.com, a resource for pastors and other Christian speakers. A popular speaker himself, Sweet has written more than twenty books, including The Three Hardest Words, Out of the Question Into the Mystery, AquaChurch, SoulTsunami, and SoulSalsa.

The Anatomy of Human Longing

The Christian life is neither Christian nor any kind of life unless we are living out our faith. And faith is not static or regimented. It is viral, and as dynamic and organic as life itself.

Your life and your experience of God will differ from mine in significant ways. But like every human on earth, we share the basic needs of nourishment, shelter, and a network of companions. These longings and pursuits shape us, even when we are not consciously aware of them. Incubating within us is the desire to reach out in order to fill our biological and relational needs. We gather food, find shelter, and do all we can to avoid being alone.

We may laugh at the Delbert McClinton song “If You Don’t Leave Me Alone (I’ll Find Somebody That Will),” but no one truly wants to be left alone. We sense that alone means lonely, and loners are losers in the lottery of life. Beyond that, something inside us pushes us to connect with others. We know that being alone means being miserable. The great poet W. H. Auden predicted the feared manner of his death: “alone at midnight, in a hotel, to the great annoyance of the management.”1 He died of a heart attack in a hotel in Vienna, on September 28, 1973. Alone.

Connection is one of the absolutes of life. We don’t choose it; it is hard-wired within us. Just as neurons that are unable to connect with other neurons will die, so abandoned souls will atrophy and die. Our well-being depends on our ability to connect with other humans. This drive pushes us with as much force as the longing for self-expression, our
attraction to stories and storytelling, and the core human urge to know others and to be known. These are not all the things that make us human, but taken together they go a long way toward defining a human being as God created us.

Nature and nurture, destiny and design, shape the way we approach God and the way we live our faith. But it is not only who we are that determines the default setting of our lives (the ways we act and react, how we think). Also shaping us is the culture in which we live. In fact, the theory of neuroplasticity argues that the structure of the human
brain is somehow shaped by our experiences, technologies, and cultures.

Admittedly, the word culture is one of the most slippery terms used in the social sciences. In fact, a founder of the field of culture studies, Raymond Williams, called the word culture one of the two or three most complicated words in the English language. When I refer to culture, I mean primarily the unvarnished vernacular of a place or period. In the 1960s, when middle-class youth wanted to rebel, they grew beards and smashed stereos. When Amish youth wanted to protest in the 1960s, they shaved their beards and bought stereos. Culture shapes behavior and how we express
our beliefs. Faith is not just a matter of logic and learning but of imagination and emotion and culture.

Life, Faith, and the Digital Age

If you are reading this, you almost certainly are a holdover from the twentieth century. You were born toward the end of the last millennium and, without even trying, you bring into this new era some of the trappings of the previous era. For purposes of this discussion, we will refer to two families (or tribes, if you prefer) that populate the twenty-first
century. Both arrived here from the last century, but one group is rooted in the past and the other is fully at home in the new world, which encompasses the present as well as what can be seen on the horizon.

We know time is constant, but in recent years it seems time started moving much more quickly. Here is a simple example from just a decade ago. Back then, when travelers were waiting for a flight, they would occupy themselves with people watching, talking, reading a book or magazine, staring into space, or relaxing. Now think about the
last time you were waiting for a flight. What were other travelers doing to fill the time? They were watching Hulu, sending pictures to friends, perfecting PowerPoints, creating photoshopped photos, texting, tweeting, on Facebook, and checking e-mail.

The culture has gone digital, but as recently as 1979, the then-current edition of The Chambers Dictionary (TCD) defined digital only as “pertaining to the fingers, or to arithmetical digits.” If you are native to the Digital Age, think about this: the word digital had an entirely different meaning when your parents were in college, or getting married,
or starting to think about adding you to the family.

The tribe that feels most at home in the twenty-first-century Digital Age is what we will call the Googlers—the digitized, globalized group that spends much of its life getting to know one another in a virtual world. The tribe that immediately precedes the Googlers we will refer to as the Gutenbergers—those who arrived from the twentieth century bringing with them influences and assumptions launched long before, in the fifteenth century. Gutenbergers believe they were shaped primarily by the space race, John Kennedy, the Cold War, and the Beatles. They are largely unaware of a more basic influence that determines their approach to life and faith. They are the product of the movable-type technology perfected by Johannes Gutenberg in the 1400s.2 If Gutenbergers still prefer to read a book that is printed on paper, rather than on an iPad, at least credit them with being loyal to the namesake.

Why Gutenberg Is Such a Big Iceberg

When the discovery of the Dead Sea Scrolls became widely known in the late 1940s, biblical scholars were eager to examine what grew to be a library of very early, handcopied biblical texts. Comparisons of the scrolls’ hand-lettered words with modern translations of the Hebrew Scriptures showed remarkable consistency. Painstaking copying by hand had preserved the integrity of the biblical text over millennia. Christians can be thankful that Essenes and others who honored the words of Scripture used more than just their thumbs in copying the texts.

For nearly fifteen hundred years the Scriptures ( Jewish and Christian) were preserved by the time-consuming process of hand copying. This served to keep the sacred text in circulation, but it was a very limited circulation. The laborious copying process meant there simply were not enough scrolls or codex produced for mass distribution. The available copies were read aloud and listened to, a system well-suited to a largely illiterate population.

That began to change in the 1400s, when technology took a breathtaking leap. Johannes Gutenberg came up with a way to produce books by hand, but through a process that avoided hand copying. Instead, movable type was used to reproduce words, sentences, entire books. His printing press introduced a radical advance in the mass production of books.

The first book created on the first movable-type printing press was the Bible. Gutenberg’s technology eventually resulted in the wide availability of affordable editions of the Scriptures. If any invention deserves the accolade “revolutionary,” give it to the printing press of Johannes Gutenberg.

The first Bible came off press around the year 1439, and the Protestant Reformation followed some eighty years later. Launched by Augustinian monk Martin Luther’s list of ninety-five points issued in Wittenburg, Germany, the  reformation owes more than a little of its success to printing and the technological advances of Gutenberg and the Italian printer Aldus Manutius, who in 1501 introduced the pocket-sized octavo format. This miniaturized the book and brought reading out of libraries into everyday lives.

Think how omnipresent printing has become. Just about every home has its own printing press hooked up to a laptop or desktop computer. But with more and faster ways to circulate written data electronically, most of us don’t bother to print documents. We still are wed to words, but we access them in ways we couldn’t have imagined at the turn of the twenty-first century.

Living Beyond Your Feelings: Controlling Emotions So They Dont Control You
Joyce Meyer
Paperback