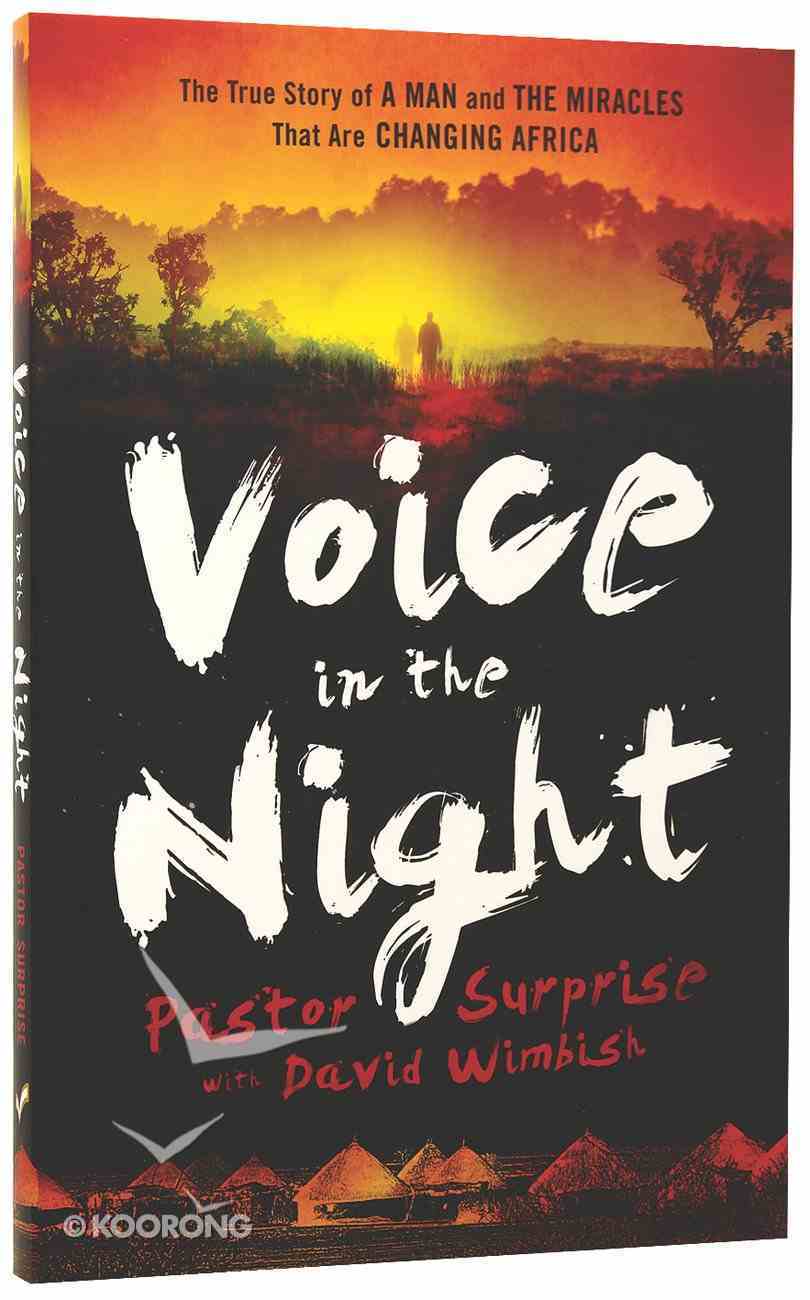 Voice in the Night: The True Story of a Man and the Miracles That Are Changing Africa

" 'Get out of the house. If you do not leave, you will die.' The command was so loud and urgent that the earth beneath me seemed to tremble. Yet my sleep-filled eyes could see no one talking. I was...

" 'Get out of the house. If you do not leave, you will die.' The command was so loud and urgent that the earth beneath me seemed to tremble. Yet my sleep-filled eyes could see no one talking. I was 15 years old, groggy, and had never heard of Jesus Christ. I didn't know where I would go or what would happen. Walking out into the African air that night, I only knew I must obey. I can think of no earthly reason why God should have intervened in my life in such a dramatic way all those years ago. I just know He did--and still does."

Born into a long line of witch doctors, Surprise Sithole ("Sit-holy") was destined for a life of fear, oppression and poverty in the African jungles. But God had other plans. What began that night in a thatch and mud hut more than 25 years ago was an adventure of faith and miracles. From signs and wonders to supernatural deliverance to divine revivals that have overtaken countries, Surprise has followed wherever God has led, even into the darkest, most unreached places.
This is his amazing true story.

"This book is bound to leave a mark on your life."
- Bill Johnson, Bethel Church, Redding, California; author, The Essential Guide to Healing

"Voice in the Night is full of miracle stories that will encourage you and fill you with fresh faith. Prepare to be greatly inspired!"
- Rolland & Heidi Baker, Ph.D., founding directors, Iris Global

Astonishing True Story of the Miracles That Are Changing Africa

Born into a long line of witch doctors, Surprise ("Surpresa") Sithole was destined for a life of fear, oppression, and poverty in the jungles of Africa. But at the age of fifteen, he was awakened in the middle of the night by an unfamiliar voice. Urgent, but not harsh, it told him to get up and leave his family immediately. As Surprise stepped out into the night, away from everything dear to him, he had no idea who God was--or what he had in store for him.

From miraculous signs and wonders to supernatural deliverance from certain death to divine revivals that overtook countries, Surprise has followed wherever God has led, becoming an agent of hope and change in a continent devastated by war, poverty, and spiritual oppression. Voice in the Night is the amazing true story of what began that night in a jungle hut more than twenty-five years ago: a journey--an adventure--of faith and miracles.
-Publisher

David Wimbish is creative supervisor for Russ Reid Company, an advertising agency in Pasadena, California, and he has written or co-authored more than 30 books. He and his wife, Kathy, have six grown children and live in La Verne, California, with their dog and two cats.

Pastor Surprise Sithole ("Sit-holy") has a passion for Jesus that drives him to the darkest and most unreached areas of the world. As the International Director of Pastors for Iris Ministries, he speaks seventeen languages and has been instrumental in starting over 15,000 churches throughout Africa. He and his wife, Trythina, have four children and live in Nelspruit, South Africa, where they direct the work of Iris-Africa and Partners In Harvest.