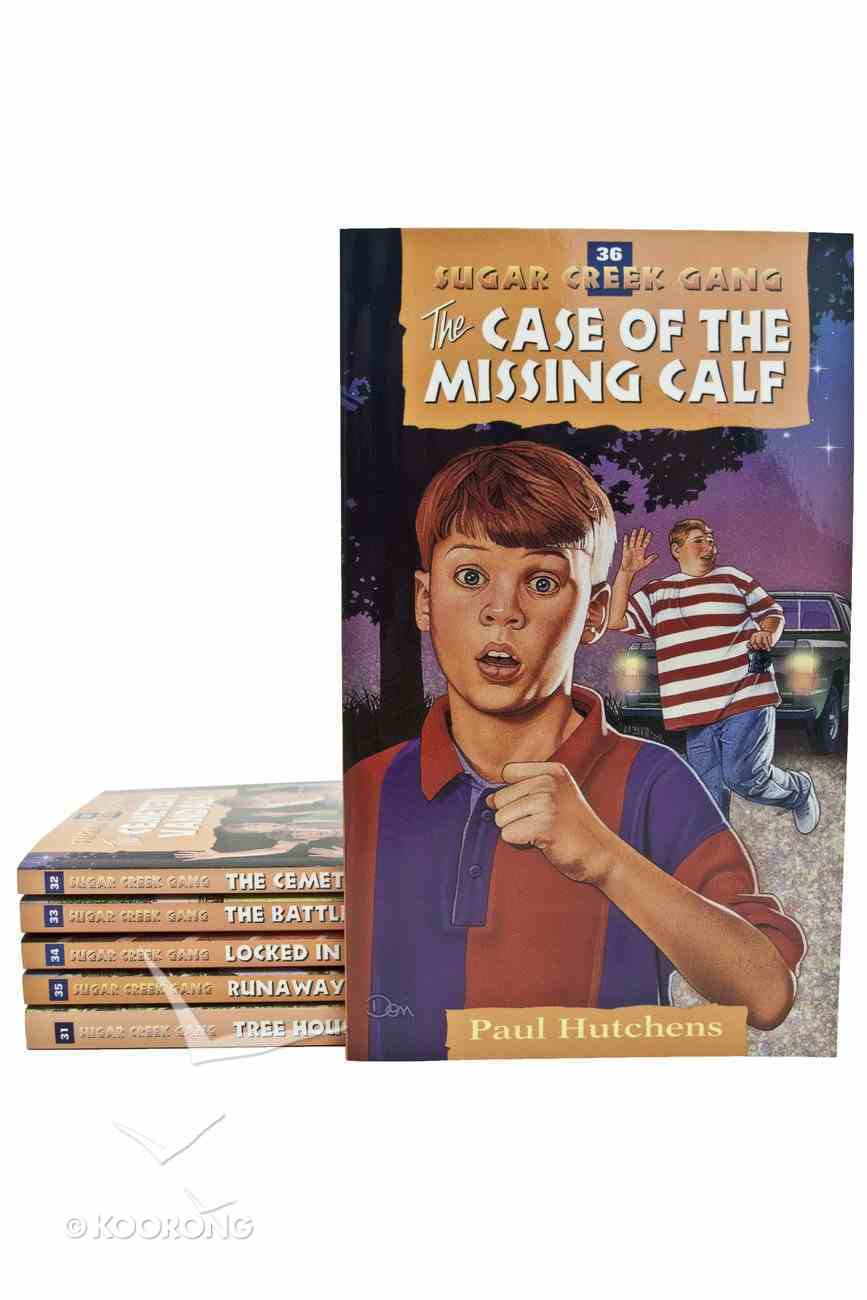 : This set includes books 31-36 in the Sugar Creek Gang Series: The Tree House Mystery, The Cemetery Vandals, The Battle of the Bees, Locked in the Attic, The Runaway Rescue, and The Case of...

:
This set includes books 31-36 in the Sugar Creek Gang Series: The Tree House Mystery, The Cemetery Vandals, The Battle of the Bees, Locked in the Attic, The Runaway Rescue, and The Case of the Missing Calf.

In The Tree House Mystery, a rainy day gets Bill Collins thinking, "What the Gang needs is a tree house!" So with Poetry's family's old lawn umbrella and some elaborate thatch work, the boys create their own headquarters down by the river. Soon they discover that someone's living in their tree house! And when their guest turns out to be an African American man, prejudice rears it's ugly head within the Gang. Join the Sugar Creek Gang as they learn that the value of people has nothing to do with their skin color.

In The Cemetery Vandals, the Sugar Creek Gang swings into action when the boys discover filthy language painted on the bridge abutments, a hole in their rowboat, and Sarah Paddler's tombstone knocked over at the cemetery. A chase ensues when some of the gang find two of the vandals in Old Man Paddler's cabin. Can Bill Collins make it to the cave in time to trap them? See how God works everything out for good as the criminals are captured with the help of the Gang's arch enemy.

In The Battle of the Bees, what kind of trouble can Bill Collins get into when he's spending the afternoon babysitting his little sister, Charlotte Ann? Plenty! The Gang find themselves in the middle of a war between two of the beehives in Mr. Collins honey bee yard. A note from Old Man Paddler challenges the Sugar Creek Gang with a riddle that reveals more than they bargained for as they uncover a trespassing boy up at his cabin in the woods. Join the Sugar Creek Gang as they learn a few lessons about loving as Jesus does.

In Locked in the Attic, Bill Collins's cousin's dog, Alexander, saved the gang, but lost his own life in a battle with a wildcat. Now Alexander's grave is in danger of being washed away by a flash flood. In relocating Alexander's grave to Tom the Trapper's dog cemetery, the gang discovers the hideout of an escaped criminal. They're trapped! Will evil triumph over good, or will the gang be taken hostage by this dangerous man? See how God protects those who trust in Him.

In The Runaway Rescue, Bill and Poetry stumble over a lost red shoe on the way to Old Man Paddler's cabin. Not too much later, they discover who it belong to- a girl who's run away from home. But what this missing girl doesn't know is that she's been bitten by a rabid pet and will die if she doesn't get to a hospital soon! Can the gang track down the girl and get her to safety before it's too late? See how God can uses us when we help others.

In The Case of the Missing Calf, the gang springs into action looking for clues when Wandering Winnie, Little Jim's Hereford calf, is nabbed by cattle rustlers. But in chasing down the culprits, Bill and Poetry end up on a wild ride in the back of the thieves' pick-up truck. What if they're discovered? How are they going to escape? Through some quick thinking and footwork, the gang not only captures the cattle rustlers, but learns that giving is better than receiving.