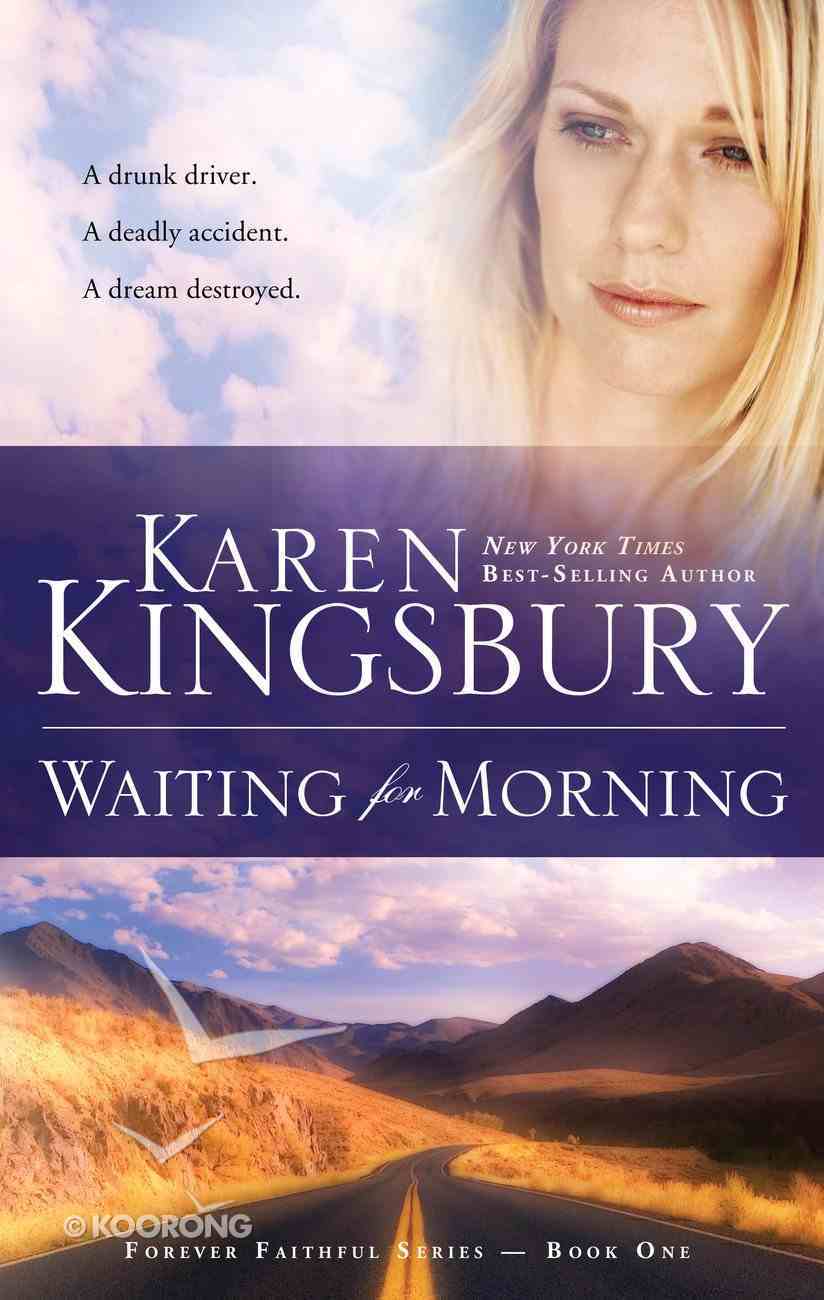 Hannah's life is perfect - until the night her husband and eldest daughter are ripped away from her by a drunken driver. Torn by grief and rage, Hannah finds her faith - like that of Jeremiah weeping over Jerusalem -...

When We Were Young (Baxter Family Series)
Karen Kingsbury
Hardback

This Side of Heaven
Karen Kingsbury
Paperback

Hannah's life is perfect - until the night her husband and eldest daughter are ripped away from her by a drunken driver. Torn by grief and rage, Hannah finds her faith - like that of Jeremiah weeping over Jerusalem - tested to the limits.

As Hannah Ryan waits for her family to return home from a camping trip, she realizes she has everything going for her—a husband other women admire, two charming teenage daughters, and a loving Christian home. As the sunny afternoon turns into twilight, her uneasiness grows along with the shadows. Then a car pulls into Hannah’s driveway, bringing two police officers...and devastating news that shatters her life forever.


In the days that follow, Hannah struggles with unspeakable feelings of sorrow and rage—feelings that fuse into one chilling purpose for living: revenge against Brian Wesley, the drunk driver who has caused all her pain.


In her fury, Hannah shuts the Lord out of her life. She’s determined not to forgive Wesley or the God who allowed this tragedy to happen. Can two caring people help Hannah rediscover her faith...before bitterness destroys her?

I am in torment within, and in my heart I am disturbed.
LAMENTATIONS 1:20A

Sunday Evening
They were late and that bothered her.

She had been through a list of likely explanations, any one of which was possible. They&rsquo;d stopped for ice cream; they&rsquo;d forgotten something back at the campsite; they&rsquo;d gotten a later start than usual.

Still Hannah Ryan was uneasy. Horrific images, tragic possibilities threatened to take up residence in her mind, and she struggled fiercely to keep them out.

The afternoon was cooling, so she flipped off the air conditioning and opened windows at either end of the house. A hint of jasmine wafted inside and mingled pleasantly with the pungent scent of Pine-Sol and the warm smell of freshly baked chocolate chip cookies.

Minutes passed. Hannah folded two loads of whites, straightened the teal, plaid quilts on both girls&rsquo; beds again, and wiped down the Formica kitchen countertop for the third time. Determined to fight the fear welling within her, she wrung the worn, pink sponge and angled it against the tiled wall. More air that way, less mildew. She rearranged the cookies on a pretty crystal platter, straightened a stack of floral napkins nearby, and rehearsed once more the plans for dinner.

The house was too quiet.

Praise music. That&rsquo;s what she needed. She sorted through a stack of compact discs until she found one by David Jeremiah.&#160;Good. David Jeremiah would be nice. Calming. Upbeat. Soothing songs that would consume the time, make the waiting more bearable.

She hated it when they were late. Always had. Her family had been gone three days and she missed them, even missed the noise and commotion and constant mess they made.

That was all this was&hellip;just a terrible case of missing them.

David Jeremiah&rsquo;s voice filled the house, singing about when the Lord comes and wanting to be there to see it. She drifted back across the living room to the kitchen. Come on, guys. Get home.

She stared out the window and willed them back, willed the navy blue Ford Explorer around the corner, where it would move slowly into the driveway, leaking laughter and worn-out teenage girls. Willed her family home where they belonged.

But there was no Explorer, no movement at all save the subtle sway of branches in the aging elm trees that lined the cul-desac.

Hannah Ryan sighed, and for just a moment she considered the possibilities. Like all mothers, she was no stranger to the tragedies of others. She had two teenage daughters, after all, and more than once she had read a newspaper article that hit close to home. Once it was a teenager who had, in a moment of silliness, stood in the back of a pickup truck as the driver took off. That unfortunate teen had been catapulted to the roadway, his head shattered, death instant. Another time it was the report of an obsessive boy who stalked some promising young girl and gunned her down in the doorway of her home.

When Hannah&rsquo;s girls were little, other tragedies had jumped off the newspaper pages. The baby in San Diego who found his mother&rsquo;s button and choked to death while she chatted on the phone with her sister. The toddler who wandered out the back gate and was found hours later at the bottom of a neighbor&rsquo;s murky pool.

It was always the same. Hannah would absorb the story, reading each word intently, and then, for a moment, she would imagine such a thing happening to her family. Better, she thought, to think it through. Play it out so that if she were ever the devastated mother in the sea of heartache that spilled from the morning news, she would be ready. There would be an initial shock, of course, but Hannah usually skimmed past that detail. How could one ever imagine a way to handle such news? But then there would be the reality of a funeral, comforting friends, and ultimately, life would go on. To be absent from the body is to be present with the Lord; wasn&rsquo;t that what they said? She knew this because of her faith.

No, she would not be without hope, no matter the tragedy.

Of course, these thoughts of Hannah&rsquo;s usually happened in less time than it took her to fold the newspaper and toss it in the recycling bin. They were morbid thoughts, she knew. But she was a mother, and there was no getting around the fact that somewhere in the world other mothers were being forced to deal with tragedy.

That was the key. Eventually, even as she turned from the worn bin of yesterday&rsquo;s news and faced her day, Hannah relished the truth that those tragedies always happened to other mothers. They did not happen to people she knew&mdash;and certainly they would not happen to her.

She prayed then, as she did at the end of every such session, thanking God for a devoted, handsome husband with whom she was still very much in love, and for two beautiful daughters strong in their beliefs and on the brink of sweetsixteen parties and winter dances, graduation and college. She was sorry for those to whom tragedy struck, but at the same time, she was thankful that such things had never happened to her.

Just to be sure, she usually concluded the entire process with a quick and sincere plea, asking God to never let happen to her and hers what had happened to them and theirs.

In that way, Hannah Ryan had been able to live a fairly worry-free life. Tragedy simply did not happen to her. Would not. She had already prayed about it. Scripture taught that the Lord never gave more than one could bear. So Hannah believed God had protected her from tragedy or loss of any kind because he knew she couldn&rsquo;t possibly bear it.

Still, despite all this assurance, tragic thoughts haunted her now as they never had before.

David Jeremiah sang on about holding ground, standing, even when everything in life was falling apart. Hannah listened to the words, and a sudden wave of anxiety caused her heart to skip a beat. She didn&rsquo;t want to stand. She wanted to run into the streets and find them.

She remembered a story her grandmother once told about a day in the early seventies when she was strangely worried about her only son, Hannah&rsquo;s uncle. All day her grandmother had paced and fretted and prayed.&hellip;

Late that evening she got the call. She knew immediately, of course. Her son had been shot that morning, killed by a Viet Cong bullet. A sixth sense, she called it later. Something only a mother could understand.

Hannah felt that way now, and she hated herself for it. As if by letting herself be anxious she would, in some way, be responsible if something happened to her family.

She reminded herself to breathe. Motionless, hands braced on the edge of the kitchen sink, shoulders tense, she stared out the window. Time slipped away, and David Jeremiah sang out the last of his ten songs. Lyrics floated around her, speaking of the Lord&rsquo;s loving arms and begging him not to let go, not to allow a fall.

Hannah swallowed and noticed her throat was thick and dry. Two minutes passed. The song ended and there was silence. Deafening silence.

The sunlight was changing now, and shadows formed as evening drew near. In all ways that would matter to two teenage girls coming home from a mountain camping trip with their father, it couldn&rsquo;t have been a nicer day in the suburbs of Los Angeles. Bright and warm, a sweet, gentle breeze sifted through the still full trees. Puffy clouds hung suspended in a clear blue sky, ripe with memories of lazy days and starry nights.

It was the last day of a golden summer break.

What could possibly go wrong on a day like this?

Grace in the Shadows (#02 in Grace Series)
Christine Dillon
Paperback