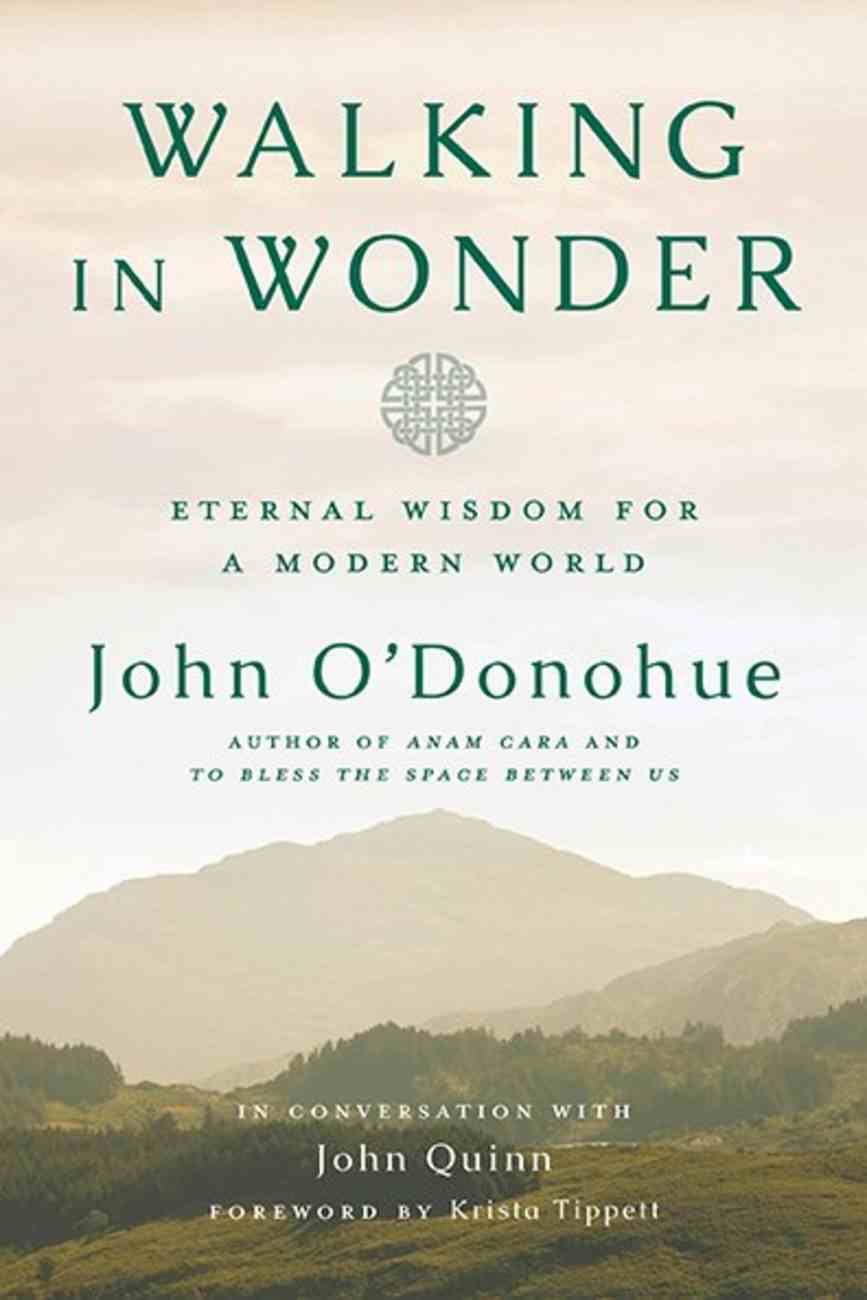 Walking in Wonder: Eternal Wisdom For a Modern World

:A beautiful companion to To Bless the Space Between Us--a new collection of insights from the most charismatic and inspirational spiritual writers of the last twenty years When author John O'Donohue passed away suddenly in January 2008,...

:A beautiful companion to To Bless the Space Between Us--a new collection of insights from the most charismatic and inspirational spiritual writers of the last twenty years

When author John O'Donohue passed away suddenly in January 2008, he left behind a remarkable body of work on the subjects of spirituality and Celtic mysticism. This latest offering is a poignant and inspirational collection of conversations and presentations from O'Donohue's work with close friend and former RTÉ broadcaster John Quinn. These timeless conversations, collated and introduced by Quinn, span a number of years and explore themes such as wonder, landscape, the medieval mystic Meister Eckhart, aging, and death. Presented in O'Donohue's inimitable lyrical style, and filled with rich insights that will help to feed the "unprecedented spiritual hunger" that he observed in modern society, Walking in Wonder is a welcome tribute to a much-loved author.
-Publisher

John O'Donohue (d.2008) was awarded a Ph.D. in philosophical theology from the University of Tubingen in 1990. He is the author of several works, including a book on the philosophy of Hegel, Person als Vermittlung; two collections of poetry, Echoes of Memory and Conamara Blues; and two international bestsellers, Anam Cara and Eternal Echoes. He lectured and held workshops in Europe and America.


One of the fascinating things about humans is that, in contrast to stones and to water and to earth and to fields, they seem to be privileged and burdened with the ability to think. That&rsquo;s the beautiful intimacy of the human in the world. There is nothing as intimate as a human being. Every human person is inevitably involved with two worlds: the world they carry within them and the world that is out there. All thinking, all writing, all action, all creation and all destruction is about that bridge between the two worlds. All thought is about putting a face on experience. Socrates said that the unexamined life isn&rsquo;t worth living. Socrates started raising the questions. One of the most exciting and energetic forms of thought is the question. I always think that the question is like a lantern. It illuminates new landscapes and new areas as it moves. Therefore, the question always assumes that there are many different dimensions to a thought that you are either blind to or that are not available to you. So a question is really one of the forms in which wonder expresses itself. One of the reasons that we wonder is because we are limited, and that limitation is one of the great gateways of wonder. Martin Heidegger said that when you can conceive of a frontier you are already beyond it, because a frontier--while it may be the limitation of where you now are or what you now feel or think--is also the threshold of what you are actually going to move into. This is put very lyrically and beautifully by a great rustic poet, our own Patrick Kavanagh, who said in his amazing &ldquo;Advent&rdquo; poem, &ldquo;Through a chink too wide there comes in no wonder.&rdquo; That means that in a certain sense, the narrower and more confined the chink or the crevice or the opening, the greater the possibility of wonder actually is. All thinking that is imbued with wonder is graceful and gracious thinking. Thought is at the heart of reality. All of the things that we do, the things that we see, touch, feel, are all constructions of thought. When you think about a city, everything in that city is an expression of thought. Hands and machines created the things, but thought was actually the forerunner of all that. And thought, if it&rsquo;s not open to wonder, can be limiting, destructive and very, very dangerous. If you look at thought as a circle, and if half the arc of the circle is the infusion of wonder, then the thought will be kind, it will be gracious, and it will also be compassionate, because wonder and compassion are sisters. Each one of us is the custodian of an inner world that we carry around with us. Now, other people can glimpse it from the way we behave, the way our language is and particularly the way that our face and our eyes are. But no one but you knows what your inner world is actually like, and no one can force you to reveal it until you actually tell them about it. That&rsquo;s the whole mystery of writing and language and expression--that when you do say it, what others hear and what you intend and know are often totally different kinds of things. So each one of us is privileged to be the custodian of this inner world, which is accessible only through thought, and we are also doomed, in the sense that we cannot unshackle ourselves from the world that we actually carry. Therefore, I think that all human being and human identity and human growth is about finding some kind of balance between the privilege and the doom or the inevitability of carrying this kind of world.


I think one of the terribly destructive areas of Western thought is that we have excluded animals from the soul, the awareness and the thought world. I feel that animals are maybe more refined than us, and that part of the recognition and respect for the animal is to acknowledge that they inhabit a different universe from us. There are sheep and rabbits and cows in the village I live in, in Connemara, and none of them know anything about Jesus, about the Buddha, about Wall Street, about zero tolerance. They are just in another world altogether. Part of the wonder of the human mind is when you look towards animals with respect and reverence, you begin to feel the otherness of the world that they actually carry. It must take immense contemplative discipline to be able to hold a world stirring within you and to have no means to express it, because animals in the main are silent and they don&rsquo;t have access to the paradoxical symbolic nuance of language as we have. So I use the word &ldquo;contemplative&rdquo; about them in that sense. For me, they are a source of a great kind of wonder. Now, that doesn&rsquo;t mean that I romanticize them--I was born on a farm and I know farming very well and I know the other dark side of the animal world too--but there is something really to be wondered at, at the way that they move and the way that they are. Where I envy animals is that I don&rsquo;t think they are haunted by consciousness in the way that humans are. I think that one of the most beautiful and frightening days in the life of a human person is when their mind really wakes up. Often when you watch a new baby or a little child, you see that they&rsquo;re still within the pastures of wonder and innocence. Then you think of them coming out of that, and traveling the longest journey that all of us have made--the journey of innocence to experience through adolescence. But that isn&rsquo;t really the worst journey. The worst and most frightening moment is the day that your mind really wakes up and that you suddenly know that everything that you think, everything that you feel, everything that you know and everything that you are connected with is somehow dependent on your awareness and your consciousness. You know that if you are graced with creative and compassionate and warm awareness, you are going to have an incredible life. You are going to have sufferings as well, but you will always return to that place of warmth and fire within yourself. But you know too on that day that if your awareness goes away or if it gets into the totally chaotic, symbolic world of otherness that we call madness, that you are totally gone. I often think of people in mental institutions. They are living in a jungle of symbols for which there is no map or grammar, and they are people who are totally instantaneous and totally haunted by a negative, distraught kind of wonder. There are many dimensions of human life that journalism, the media, religion and politics never advert to, marginal places where incredible soul-presence and soul-making and soul-creativity are always secretly at work. Ezra Pound said something like that when he said that beauty always shuns the public places--where the light is too garish and where there is no shelter--but it goes to the out-of-the-way, unknown places because only there will it encounter the reverence and hospitality of gaze that is worthy of it. Or again, to paraphrase Kavanagh: &ldquo;the chink is too wide.&rdquo;


One of the most amazing recognitions of the human mind is that time passes. Everything that we experience somehow passes into a past invisible place: when you think of yesterday and the things that were troubling you and worrying you, and the intentions that you had and the people that you met, and you know you experienced them all, but when you look for them now, they are nowhere--they have vanished. One of the questions that has always puzzled me is, is there a place where our vanished days secretly gather? To put it another way, like the medieval mystics used to ask, where does the light go when the candle is blown out? It seems to me that our times are very concerned with experience, and that nowadays to hold a belief, to have a value must be woven through the loom of one&rsquo;s own experience, and that experience is the touchstone of integrity, verification and authenticity. And yet the destiny of every experience is that it will disappear. It&rsquo;s a great consolation of course that things do actually disappear, especially when you feel bad. There was a contest of wisdom one time in ancient Greece to find who could write down a sentence which would somehow always be true. The sentence that won the competition was &ldquo;This too will pass.&rdquo; One of my favorite thinkers in the feminine and mystical tradition is Teresa of Avila. She cautioned that in bad, lonesome, difficult times, you should never forget that this too will actually pass. So there is a shelter and a kindness in that acknowledgment of transience. But there&rsquo;s also a desperate loneliness in transience, in knowing the one that you love, the beautiful time that you are having, the lovely things that are happening to you will all actually disappear.