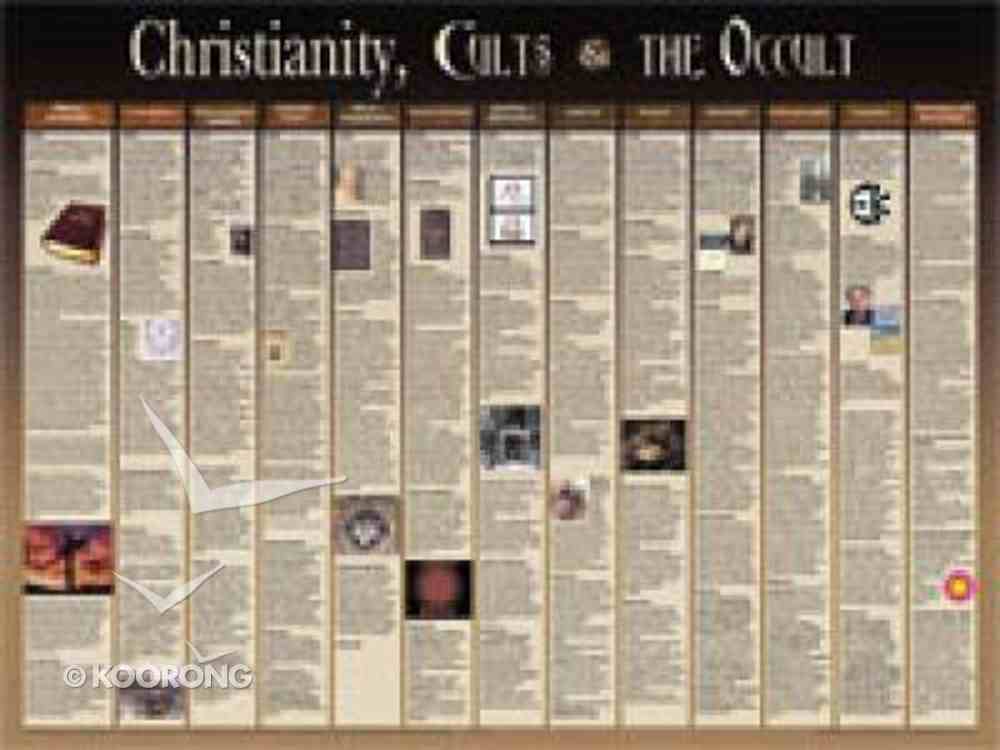 New Cults Comparison Wall Chart: Christianity, Cults & Occult chartBARNA SURVEY SHOWS INFLUENCE OF THE SUPERNATURAL ON TEENS. Nearly 75% of U.S. teens have dabbled in some form of psychic activity or witchcraft, according to a new Barna survey of...

New Cults Comparison Wall Chart: Christianity, Cults & Occult chartBARNA SURVEY SHOWS INFLUENCE OF THE SUPERNATURAL ON TEENS. Nearly 75% of U.S. teens have dabbled in some form of psychic activity or witchcraft, according to a new Barna survey of more than 4,000 teens. Occult themes, supernatural beings, witchcraft, and spell-casting, are part of American culture - including movies (such as Underworld, The Sixth Sense, The Exorcism of Emily Rose), television programs (Buffy the Vampire Slayer, Ghost Whisperer), books (Harry Potter, Goosebumps), and video games (Doom, The Darkness).This fold-out chart clearly contrasts Christianity and 11 movements with a wide range of occult connections:* Freemasonry * Kabbalah Centre * Wicca/Neopaganism * Satanism * Spiritualism * Santeria * Voodoo * Theosophy* Anthroposophy* Rosicrucianism * EckankarTopics compared:* Origins (founders, dates, headquarters)* Key writings* Key beliefs* Occultic practices* Affiliated organizations * Symbols and photos* News and controversiesBonus sections:* Astrology and Horoscopes * Glossary of Occult Terms * Scriptural Warnings on the OccultSome religious groups look harmless, but the Bible says their practices can be spiritually deadly! Many people are attracted to occult groups like the Kabbalah Centre because of celebrities such as Madonna and Demi Moore. Other people don't know what's behind Rosicrucianism and Anthroposophy until it's too late. Pop culture glorifies Wicca and neopaganism. Christians need clear, reliable information on these and other groups to know what's what and who's who.Many American youth (73%) have engaged in at least one type of psychic or witchcraft-related activity, beyond watching a TV show or movie, or reading their horoscope.The Barna Group reported on the most common types of occult behaviors:Using a Ouija board and reading a book about witchcraft or Wicca - 30% of teensPlaying a game featuring sorcery or witchcraft elements - 25% of teens. Participated in a seance- 10% of teens Casting a spell or mixing a magic potion - approx 8% of teensHaving one's palm read (30%)Having their fortune told (27%). Visiting a medium or spiritual guide (9%).Consulting a psychic (9%).Is someone you know involved with an occultic group? This unique, up-to-date chart can give you the information you need to understand, to pray, and to offer help.
-Publisher