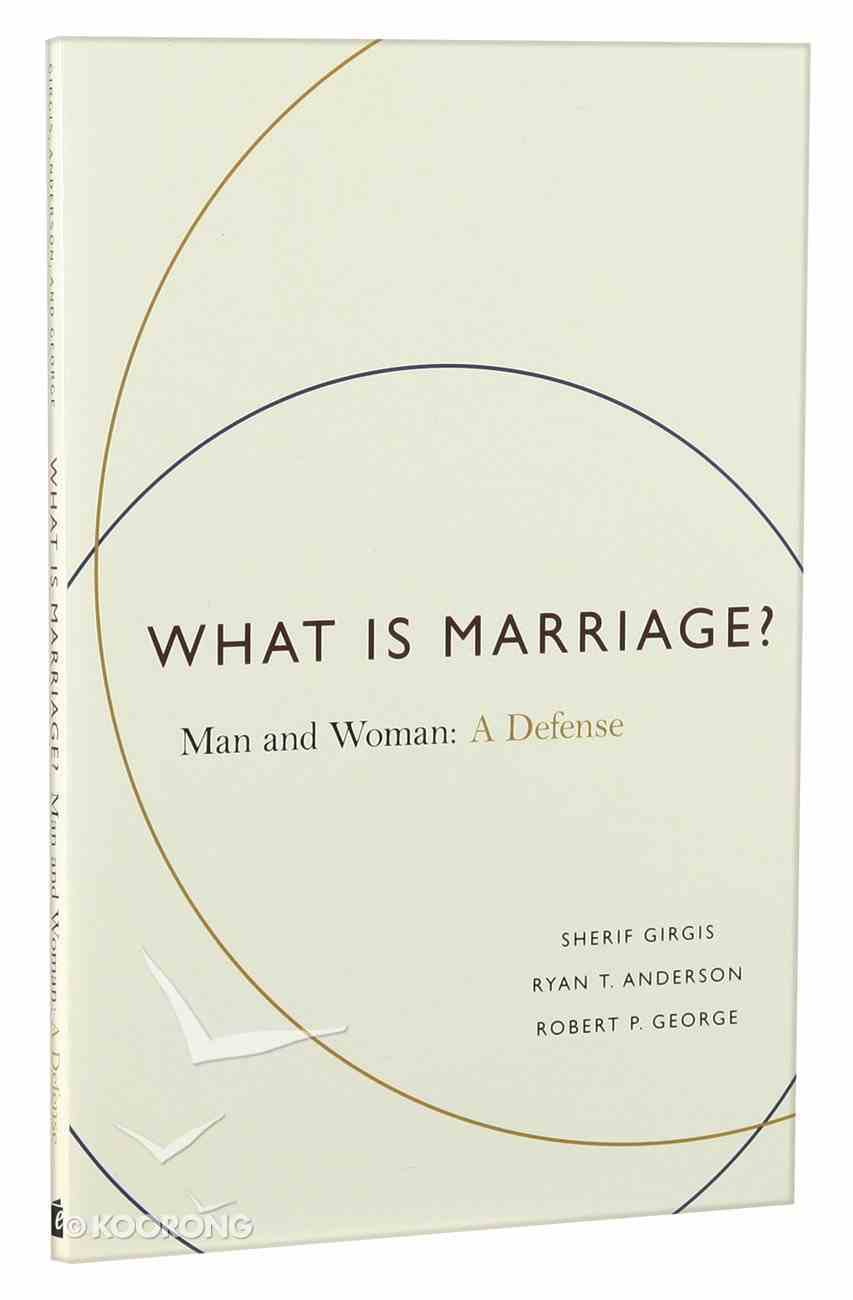 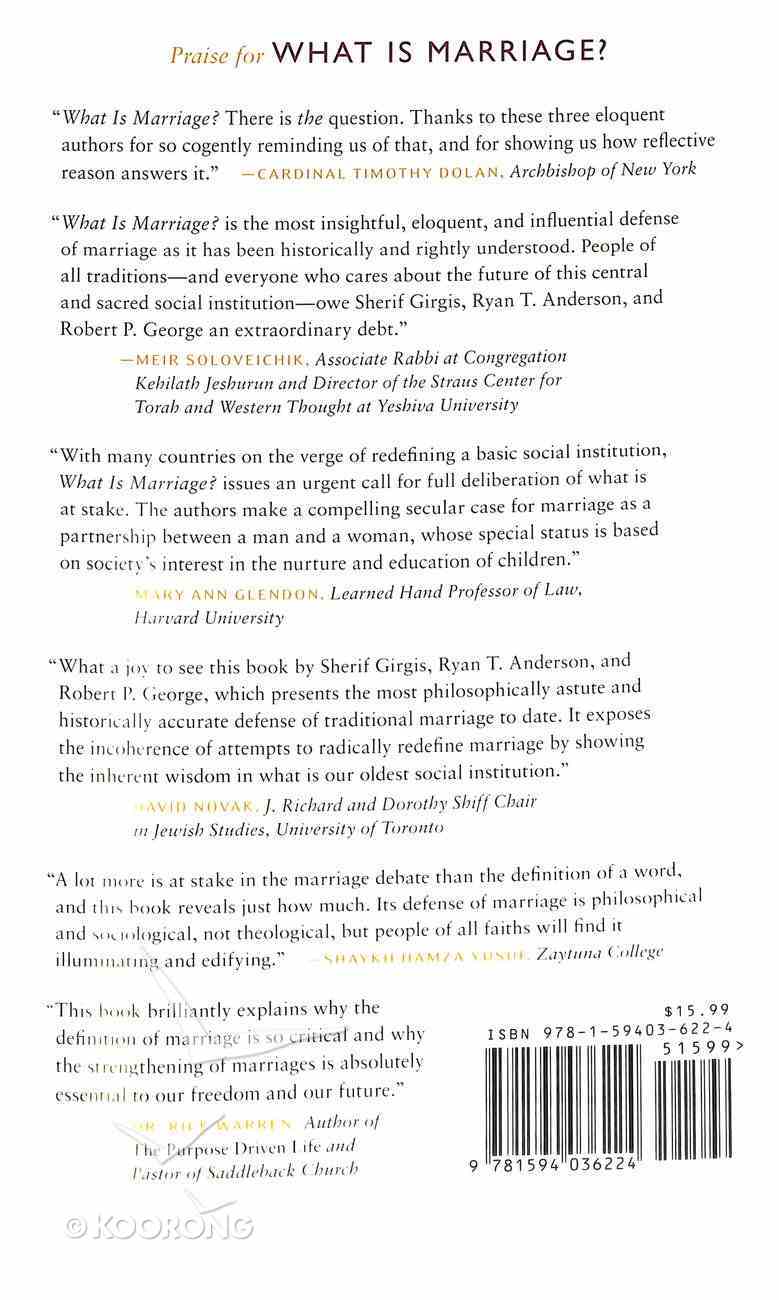 What is Marriage? Man and Woman - a Defense

Expanding on the authors' ground-breaking article in the Harvard Journal Of Law, this book presents a thorough critique of attempts to redefine marriage to include same-sex unions. Every argument raised in favour of this radical change is addressed and conclusively...

2 available
Expected to ship within 2 hours from Australia.
Learn More
Free Shipping
for orders over $99.

Expanding on the authors' ground-breaking article in the Harvard Journal Of Law, this book presents a thorough critique of attempts to redefine marriage to include same-sex unions. Every argument raised in favour of this radical change is addressed and conclusively refuted. A landmark work.

Until yesterday, no society had seen marriage as anything other than a conjugal partnership: a male-female union. 'What Is Marriage?' identifies and defends the reasons for this historic consensus and shows why redefining civil marriage is unnecessary, unreasonable, and contrary to the common good.Originally published in the 'Harvard Journal of Law and Public Policy', this book's core argument quickly became the year's most widely read essay on the most prominent scholarly network in the social sciences. Since then, it has been cited and debated by scholars and activists throughout the world as the most formidable defense of the tradition ever written. Now revamped, expanded, and vastly improved, 'What Is Marriage?' stands poised to meet its moment as few books of this generation have.Rhodes Scholar Sherif Girgis, Heritage Foundation Fellow Ryan T. Anderson, and Robert P. George offer a devastating critique of the idea that equality requires redefining marriage. They show why both sides must first answer the question of what marriage really 'is'. They defend the principle that marriage, as a comprehensive union of mind and body ordered to family life, unites a man and a woman as husband and wife, and they document the social value of applying this principle in law.Most compellingly, they show that those who embrace same-sex civil marriage leave no firm ground--none--for not recognizing every relationship describable in polite English, including polyamorous sexual unions, and that enshrining their view would further erode the norms of marriage, and hence the common good.Finally, 'What Is Marriage?' decisively answers common objections: that the historic view is rooted in bigotry, like laws forbidding interracial marriage; that it is callous to people's needs; that it can't show the harm of recognizing same-sex couplings, or the point of recognizing infertile ones; and that it treats a mere "social construct" as if it were natural, or an unreasoned religious view as if it were rational.If the marriage debate in America is decided soon, it will be with this book's help or despite its powerful arguments.
-Publisher

Sherif Girgisis a Ph.D. student in philosophy at Princeton University and a J.D. candidate at Yale Law School. After graduating Phi Beta Kappa andsumma cum laudefrom Princeton, where he had won prizes for best senior thesis in ethics and best thesis in philosophy, as well as the Dante Society of America&#8217;s national Dante Prize, he obtained a B.Phil. in moral, political, and legal philosophy from the University of Oxford as a Rhodes Scholar. Robert P. Georgeis McCormick Professor of Jurisprudence and Director of the James Madison Program in American Ideals and Institutions at Princeton University. He has served on the President's Council on Bioethics and as a presidential appointee to the United States Commission on Civil Rights. He is a former Judicial Fellow at the Supreme Court of the United States, where he received the Justice Tom C. Clark Award. He is a recipient of the United States Presidential Citizens Medal and the Honorific Medal for the Defense of Human Rights of the Republic of Poland. Ryan T. Anderson, a Phi Beta Kappa andmagna cum laudegraduate of Princeton University, is editor ofPublic Discourse: Ethics, Law, and the Common Good, the online journal of the Witherspoon Institute, and a doctoral candidate in political philosophy at the University of Notre Dame. He has worked as assistant editor ofFirst Things and was a Journalism Fellow of the Phillips Foundation. His writings have appeared in theHarvard Journal of Law and Public Policy, First Things,theWeekly Standard, National Review,theNew Atlantis, and theClaremont Review of Books.