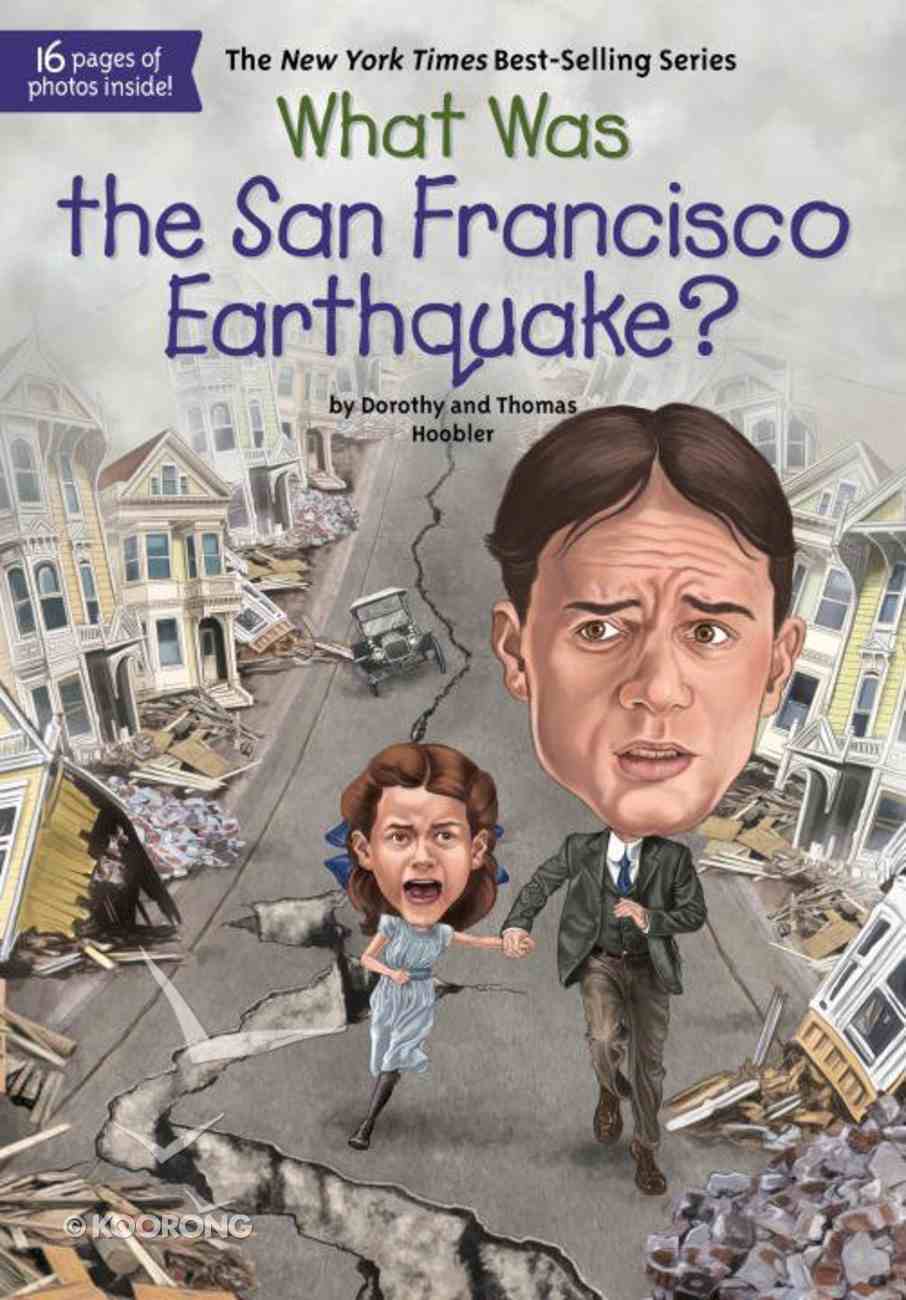 What Was the San Francisco Earthquake?

:In this addition to the What Was? series, kids will experience what it was like to be in San Francisco in 1906 when the ground buckled in a major, catastrophic earthquake. One early April morning in 1906,...

Covenant History (Books Of The Bible For Kids Series)
eBook

:In this addition to the What Was? series, kids will experience what it was like to be in San Francisco in 1906 when the ground buckled in a major, catastrophic earthquake.

One early April morning in 1906, the people of San Francisco were jolted awake by a mammoth earthquake-one that registered 7.8 on the Richter Scale. Not only was there major damage from the quake itself but broken gas lines sparked a fire that ravaged the city for days. More than 500 city blocks were destroyed and over 200,000 people were left homeless. But the city quickly managed to rebuild, rising from the ashes to become the major tourist destination it is today. Here's an exciting recount of an incredible disaster.
-Publisher

Dorothy Hoobler is a historian and author of over sixty books, both fiction and nonfiction, mostly for young readers. Her and her husband are the authors of the well-loved American Family Album series, including The Japanese American Family Album, which was named a Carter G. Woodson Honor Book in 1997. The Society for School Librarians International chose their book Showa: The Era of Hirohito for a best book award in 1991, and they have been cited for excellence by the Library of Congress, the Parents' Choice Foundation, Bank Street College, the International Reading Association, the National Conference of Christians and Jews, and the New York Public Library.

Thomas Hoobler is a historian and childrens book author of over sixty books, both fiction and nonfiction, mostly for young readers. He and his wife Dorothy are the authors of the well-loved American Family Album series, including The Japanese American Family Album, which was named a Carter G. Woodson Honor Book in 1997. The Society for School Librarians International chose their book Showa: The Era of Hirohito for a best book award in 1991, and they have been cited for excellence by the Library of Congress, the Parents' Choice Foundation, Bank Street College, the International Reading Association, the National Conference of Christians and Jews, and the New York Public Library.

:What Was the San Francisco Earthquake?
&#160;
On April 18, 1906, at 5:12 a.m., an earthquake ripped through the city of San Francisco. It lasted only forty-seven seconds. But it tore apart hundreds of buildings and streets. Many people were killed in their beds when their houses collapsed. More were injured and would die later. Estimates of the number of people killed range from eight hundred to three thousand.
&#160;
It was the worst natural disaster in United States history, up to that time. The earthquake caused fires that burned for three days and nights. That led to even more damage and loss of life. About three-quarters of the city&rsquo;s buildings were lost.
&#160;
In 1906, San Francisco was the greatest American city west of the Mississippi River. It had a population of around four hundred thousand. Surrounded on three sides by water, it was the country&rsquo;s most important Pacific Ocean port. Ships brought fine silks and tea from Asia. California&rsquo;s farm products moved from the port to other countries.
&#160;
San Francisco had the world&rsquo;s first cable-car system. It carried people up and down the steep hills. But there were no bridges yet connecting San Francisco to nearby cities. Ferries took people across San Francisco Bay to Oakland and Alameda.
&#160;
The city had many famous neighborhoods, from wealthy Nob Hill to the rowdy center of nightlife called the Barbary Coast. Chinatown was one of the city&rsquo;s oldest neighborhoods. It had the largest Asian-born population in the nation.
&#160;
Earthquakes had rocked San Francisco before the big one hit. They kept happening because of San Francisco&rsquo;s location. It sits over the San Andreas Fault. The fault is a giant underground crack about 810 miles long. It runs from Humboldt County, California, past the Salton Sea near San Diego. The fault marks the place where two huge tectonic plates meet&mdash;the Pacific Plate and the North American Plate.
&#160;
The earth&rsquo;s crust is made up of many tectonic plates that all move slowly. The Pacific Plate lies under the Pacific Ocean. It heads northwest. The North American Plate moves in the opposite direction.
&#160;
An earthquake occurs when two plates collide. Pressure builds up over time. Then, the plates suddenly slip and move very fast. There&rsquo;s no way to tell exactly when this will happen.
&#160;
No one in San Francisco was expecting so great a disaster.
&#160;


Chapter 1:&#160;The Eve of Destruction
&#160;
April 17, 1906
&#160;
The night before the earthquake struck was an important one for San Francisco. The world-famous singer Enrico Caruso was performing at the Tivoli Opera House. Caruso only appeared in big cities, ones that could pay his fee.
&#160;
Ticket holders arrived at the theater in fancy dress. Men wore tuxedos. The women had on elegant gowns and jeweled &ldquo;dog collar&rdquo; necklaces&mdash;the latest fashion.
&#160;
Caruso&rsquo;s voice delighted the audience. The applause went on so long that he took nine curtain calls. No one could have guessed that the beautiful opera house would soon be a burned-out shell.
&#160;
San Francisco had many restaurants that stayed open very late. Caruso went to one that served his favorite pasta. He did not return to his room at the Palace Hotel until after 3:00 a.m.
&#160;
Others also were up late that night, but not for fun. For firefighters, it was their job to be on duty.
&#160;
A fire broke out in a warehouse around 11:00 p.m. The fire department responded within minutes. A special alarm system had recently been set up. The bells rang out a code that told exactly where the fire was located.
&#160;
Each fire station had extra-strong horses that could pull fire trucks up the city&rsquo;s steep hills. That night, firefighter Jack Murray noticed that the horses were unusually nervous. They kicked the sides of their stalls and resisted being put into harness. The horses had been to many fires and never behaved like this. Some people believed animals acted this way before an earthquake. Murray mentioned it to the fire chief, Dennis T. Sullivan.
&#160;
Sullivan had studied fires in other cities. He knew that San Francisco could be destroyed by a major one. Nine out of every ten buildings were made of wood. Parts of the city were built on new land, made from earth dumped into the San Francisco Bay. So the buildings did not rest on very solid ground. Fires after an earthquake would destroy these areas.
&#160;
Another problem was the number of tall buildings that now dotted the city&rsquo;s skyline. Some were over three hundred feet high. The water pressure from the city&rsquo;s hydrants was not strong enough to reach fires on upper floors.
&#160;
The fire department had pumper trucks that could bring water from the bay. But if a fire was too far from the bay, the pumpers could not be used. There were also cisterns (underground tanks of water). However, Sullivan knew that the cisterns were old and leaky. They would not be much help in a major fire.
&#160;
In other cities, fire departments sometimes used dynamite to fight major fires. Destroying buildings in the path of the fire kept it from spreading. Sullivan had asked to train a team to use dynamite for large fires in San Francisco. But city officials always said there wasn&rsquo;t enough money to pay for that.
&#160;
So when Sullivan heard about the nervous horses, the chief just shook his head. Something else to worry about tomorrow. After the warehouse fire was put out, he went home to the fire station, where he and his wife lived. The chief was never off duty, not even when he slept.

The Unofficial Bible For Minecrafters: The Cross and the Miracle
Garrett Romines, Christopher Miko
Paperback