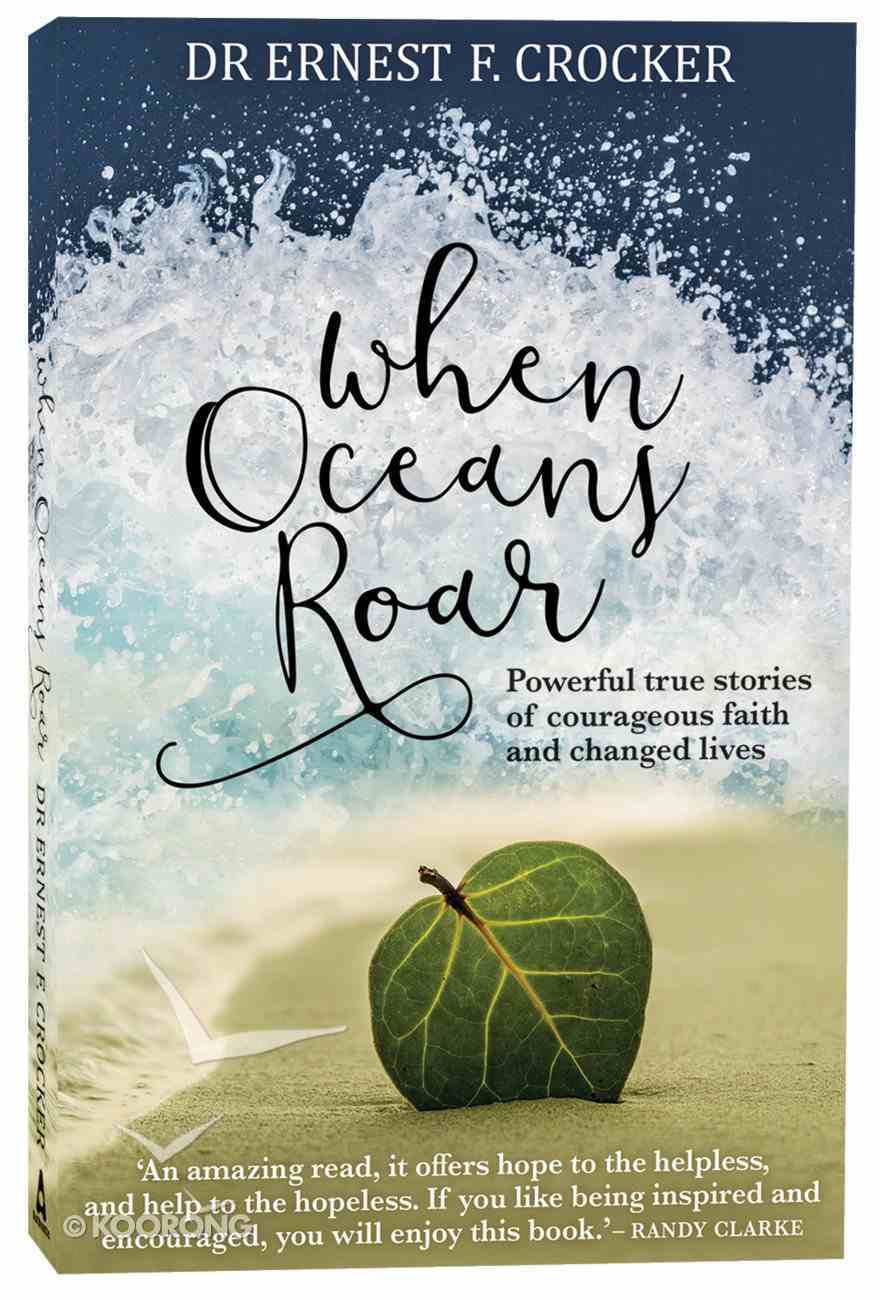 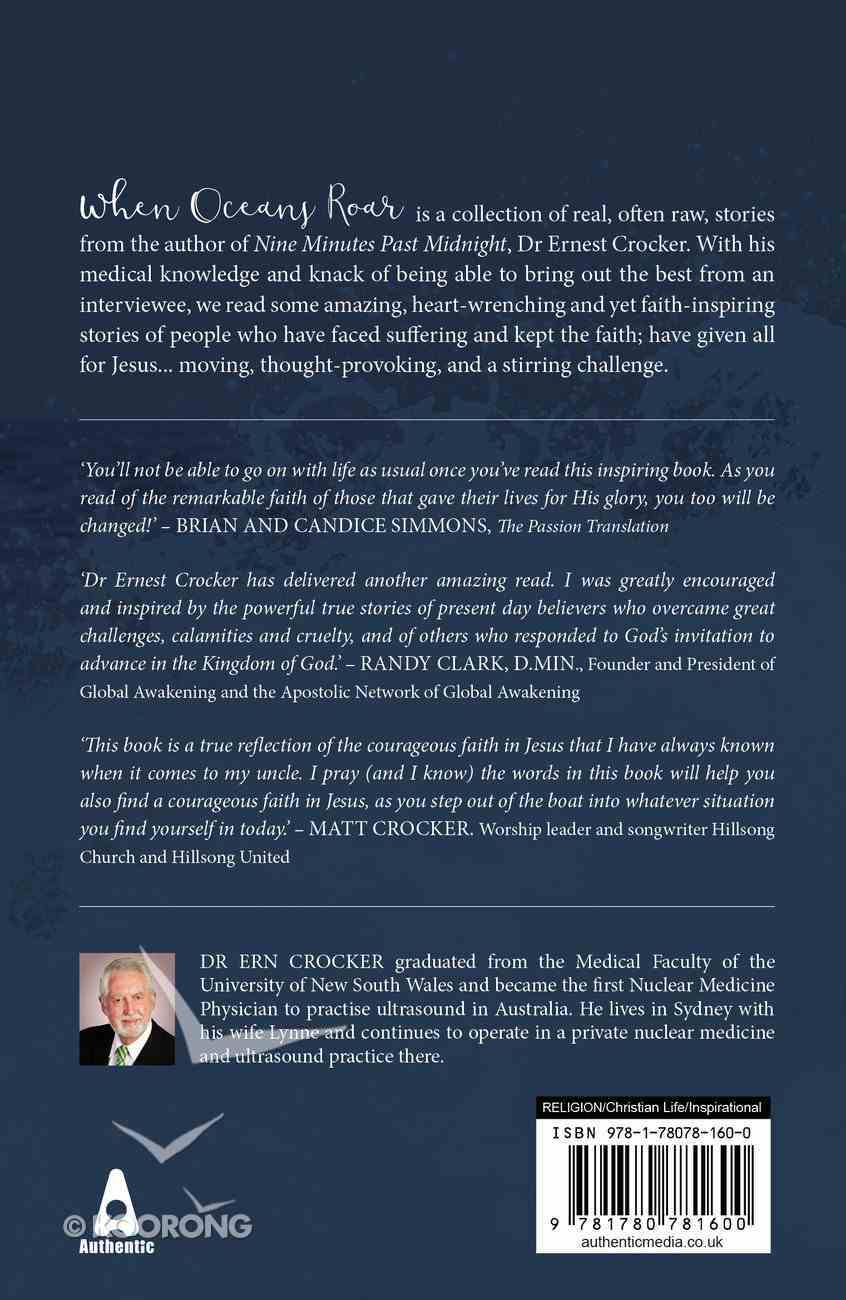 The true stories in this collection from Ern Crocker have one thing in common: they are all testimonies of those who have taken God at his word and said 'yes'. Readers will encounter case after case of God's miraculous provision,...

The true stories in this collection from Ern Crocker have one thing in common: they are all testimonies of those who have taken God at his word and said 'yes'. Readers will encounter case after case of God's miraculous provision, his radical rescues, and his steadfast faithfulness.

:When Oceans Roar tells the remarkable stories of people who heard the still small voice of God, and saw God do amazing things when they took God at his word and surrendered themselves to him.

The stories told in this book represent roads that few people would have chosen. Yet having said 'yes' to God, and taken the first step, each one was strengthened, empowered and equipped for the journey ahead. It includes the story of a couple who prayed over their child who had no heart beat for three days in the sure knowledge that God would meet them at their point of need, and of a Bangladeshi freedom fighter taken before a firing squad only to learn that God had a plan for his life. This is a book that will challenge you to find your true identity, and having done so to step out of complacency and take risks in the sure knowledge that God will never leave you or forsake you as you surrender yourself to him. Be inspired to listen out for the still small voice of God above the ocean's roar.
-Publisher

Trained at the University of New South Wales, Dr Ernest Crocker is an experienced nuclear medicine physician, and the first to practise ultrasound in Australia. He lives in Sydney with his wife Lynne, and operates in a private nuclear medicine and ultrasound practice there.

He graduated from the Medical Faculty of the University of New South Wales with honours in 1969, was awarded the University Prize for Surgery, the Gilbert Ashby Prize for Surgery, and the HP and BL Melville Prize for general proficiency. Dr Crocker had previously obtained a a bachelors degree in Medical Science with honours at the Univ NSW and during that time was privileged to work with Sir John Eccles Nobel Prize winner at ANU. His thesis was related to the role of alpha and beta adrenergic systems in the cardiovascular responses to hyperventilation in arterial hypoxia.

He completed his residency at Royal Prince Alfred Hospital in Sydney and commenced advanced training in Nuclear Medicine. During this time he also trained in Diagnostic Ultrasound working with Dr George Kossoff of the Ultrasonics Institute.

In 1975 he completed nuclear medicine training as a research fellow at the University of Pennsylvania before returning to Sydney to be admitted as a Fellow of the Royal Australasian College of Physicians. He was made founding Director of Nuclear Medicine and Ultrasound at Westmead Hospital.

In 1986 Dr Crocker with his business partner established Nuclear Medicine and Ultrasound associated in Western Sydney. He now works in a large private imaging practice in Sydney.

Dr Crocker has contributed seventy-five scientific papers to the literature in Nuclear Medicine and Ultrasound. He holds the qualifications of BSc(Med) MBBS FRACP DDU FAANMS.

Dr Crocker has had a particular interest in Christian Outreach to China, and has visited many times as a representative of the Jian Hua Foundation to conduct teaching seminars. He has also been involved with World Hope Network visiting Cambodia and Vietnam for short term medical outreach projects.

Deceived No More: How Jesus Led Me Out of the New Age and Into His Word
Doreen Virtue
Paperback