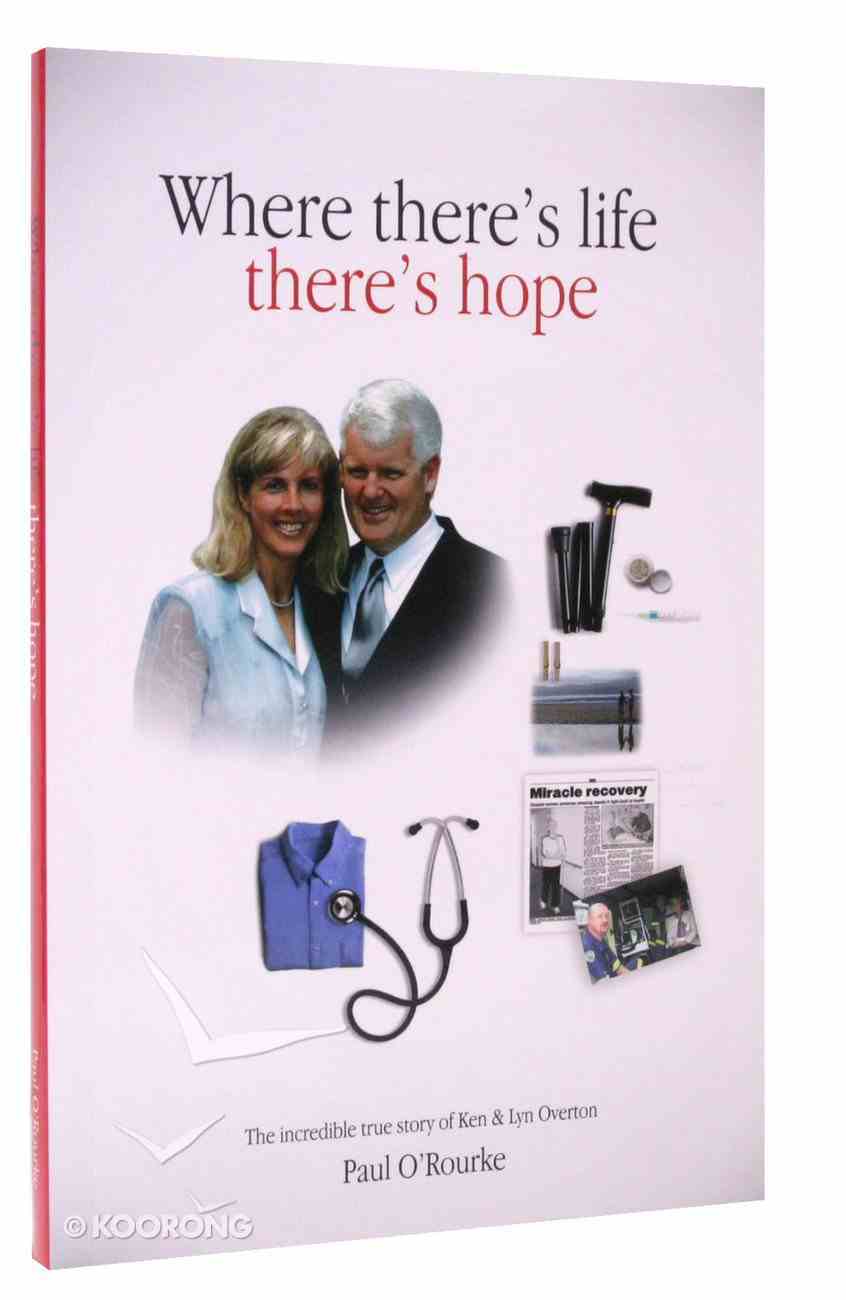 Medical experts call Tasmanian couple Ken and Lyn Overton's recoveries "miraculous" in a new book called Where There's Life There's Hope. Ken and Lyn's near-perfect lives changed in an instant when they were struck down with prolonged life-threatening illnesses, five...

Where There is Life, There Really is Hope
Caroline Cook
Paperback

There Goes My Social Life: From Clueless to Conservative
Stacey Dash
eAudio

Cindergirl: My Journey Out of the Ashes to a Life of Hope
Christina Meredith, Henry Cloud (Fwd)
eBook

And Then There Were Nuns
Jane Christmas
eBook

There Must Be Something More
Sid Roth
eBook

The Art of Being There
Duncan Campbell
eAudio

Medical experts call Tasmanian couple Ken and Lyn Overton's recoveries "miraculous" in a new book called Where There's Life There's Hope.Ken and Lyn's near-perfect lives changed in an instant when they were struck down with prolonged life-threatening illnesses, five years apart. However, in a series of remarkable and unprecedented events, both recovered, to the amazement of medical professionals.

Lyn was clinically dead for over 30 minutes when a blood clot broke free from her broken leg, punched through her heart and lodged in her lungs causing cardiac arrest. She was taken to the Mersey Hospital and en route suffered another arrest and also on arrival. She then had a bleed in her brain, which caused a stroke. Medical staff at the Hospital gave her little hope of survival, yet Lyn not only survived but was spared the anticipated serious brain damage.

The inspiring story of faith, hope and love was written as an encouragement to anyone who is, or will go through trials, and to provide a source of funds for two Australian charities, Mercy Ships and Compassion Australia.^The Overtons are known of in Tasmania, having lived and worked in Devonport, along the North West Coast and in Launceston all their lives. Ken is well known in the business community through his property developments and former plasterboard business. (For inquiries about interviews contact Ken Overton at kenlyn@miraclerecovery.org; or on 0418 141 323.

Paul O'Rourke is a husband, dad, grandfather, son and father-in-law; then an author, journalist and speaker. He is married to Janine, his wife and best friend of over 29 years. They have three adult children and three grandchildren.
After leaving school, he spent the next 16 years in print journalism as a reporter, editor and managing editor, including as Editor-in-Chief of the Newcastle Herald, Australia's sixth largest daily newspaper. He left the Herald to join national charity, Compassion Australia, where he became CEO of the child sponsorship organisations with a $60 million income and 150 staff. Under Paul's leadership of nine years, Compassion almost quadrupled in revenue and sponsorships. Compassion Australia now assists over 90,000 children in almost 30 countries.
He left Compassion in 2010 to author his third book, the latest title being on the crises affecting Australian children, as well as to speak and write. He is working on two other titles and edits a public policy magazine for the Australian Christian Lobby.
Paul has a Master's Degree in holistic child development and completed theological studies through C3 Victory's School of Ministry, as well as having completed a journalism cadetship. He is a passionate advocate for children, having seen first hand the effects of poverty, abuse and neglect and family breakdown on children in the developing and developed worlds, including in remote indigenous communities. He speaks, teaches and writes widely on children's issues, family and leadership through Paul O'Rourke Ministries.