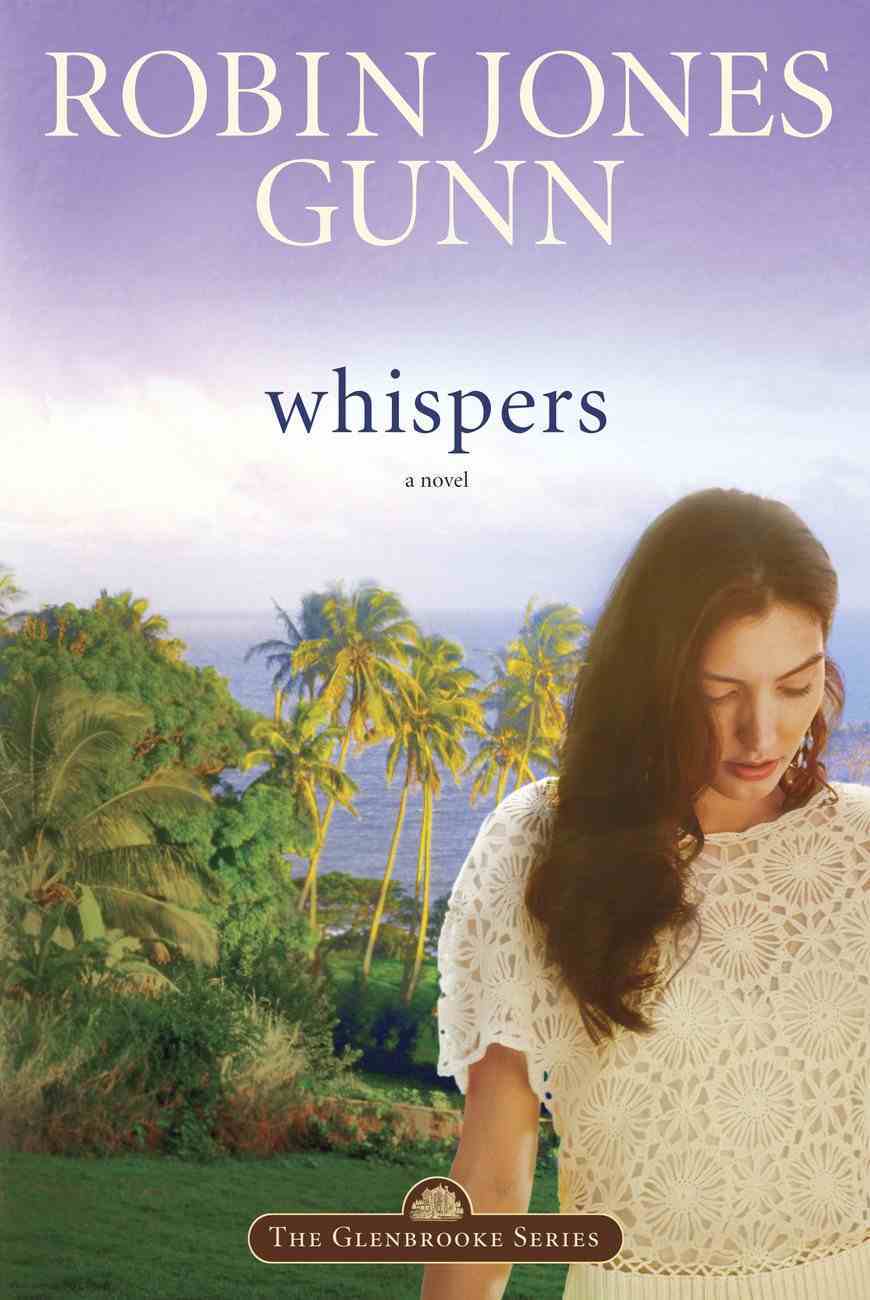 Teri Moreno went to Maui hoping to start one special relationship. But romance takes a complicated twist when the Spanish teacher from Glenbrooke, Oregon, finds herself enjoying the attentions of three men: the handsome marine biologist who called her back...

Teri Moreno went to Maui hoping to start one special relationship. But romance takes a complicated twist when the Spanish teacher from Glenbrooke, Oregon, finds herself enjoying the attentions of three men: the handsome marine biologist who called her back to the islands; a charming old crush from high school; and a clumsy, endearing Australian with a wild past.

Swept up by her feelings, yet determined to make the right choice, Teri makes powerful discoveries about God's law and His grace in this new release of Whipsers, now book two in the heartwarming Glenbrooke series from Robin Jones Gunn.

Robin Jones Gunn is the award-winning, bestselling author of more than 45 books, including 8 in The Glenbrooke series. She is also the author of the nonfiction work, Mothering by Heart. Robin and her husband, Ross, live in Portland, Oregon, with their teenage son and daughter.
-Publisher

Teri Moreno flipped her thick brown hair over her shoulder and peered through the cluster of Maui tourists gathered at the airport baggage claim. She had hoped to see Mark among the locals, but it was her sister&rsquo;s voice that greeted her.

Anita ran toward her with a lei of white plumeria flowers strung over her arm. &ldquo;You&rsquo;re here!&rdquo; Anita said breathlessly, giving Teri a hug. &ldquo;I&rsquo;m sorry we weren&rsquo;t here to meet your flight. Here, these are for you.&rdquo; She placed the fragrant flowered lei around Teri&rsquo;s neck. &ldquo;Dan&rsquo;s parking the car. We got a late start. I&rsquo;m sorry.&rdquo;

&ldquo;Don&rsquo;t worry about it,&rdquo; Teri said, lifting the sweet flowers to her nose and drawing in the scent. A dozen memories of her previous summer on the island filled her mind. She looked past her sister and with a sheepish smile asked, &ldquo;Mark wasn&rsquo;t able to come?&rdquo;

Aware that her slim sister&rsquo;s glance had rested on Teri&rsquo;s thighs, Teri said, &ldquo;Not really.&rdquo; A familiar uneasiness settled in. She had never been able to wear a size six pair of jeans like her older sister could&mdash;nor would Teri ever be able to.

&ldquo;You look great, too,&rdquo; Teri said. &ldquo;I love your hair like that. I don&rsquo;t think you&rsquo;ve ever worn it that short. It&rsquo;s cute.&rdquo;

Anita fingered the ends of her sleek, dark hair that clung to the nape of her neck. &ldquo;Do you like it? I had it cut a week ago. I&rsquo;m still getting used to it, but I think I like it. Dan does.&rdquo;

Just then Dan appeared. He was the same age as Anita, twenty-seven. But his dark, wavy hair and short, stocky build gave him the look of a high school wrestler.

&ldquo;So how was your flight?&rdquo; Dan said, giving Teri a hug and motioning with his head that they should follow him to the baggage claim area.

&ldquo;Don&rsquo;t think for a minute that your five weeks here will be uneventful,&rdquo; Anita said. &ldquo;We are going to have so much fun! I have all kinds of things planned for us.&rdquo;

Teri wondered if Anita had included Mark in her plans. &ldquo;That&rsquo;s my suitcase,&rdquo; Teri said.

Dan grabbed it for her and lifted it with ease. He had lots of experience with luggage since he worked as a bellhop at the Halekuali&rsquo;i, one of the most expensive resorts on the west side of Maui. &ldquo;Is this your only bag?&rdquo;

&ldquo;Traveling light this time, I see. Looks like you learned all you need to bring to Maui is a bathing suit,&rdquo; Dan said, leading them out to the parking lot.

&ldquo;A bathing suit and every hard-earned penny I could scrape up,&rdquo; Teri added. She again drew in the sweet scent of the flowers around her neck as they stepped out from under the protected covering of the baggage claim area. A strong wind blew their hair and dried the perspiration from their shirts.

&ldquo;Ah!&rdquo; Teri greeted the island breeze with upturned chin and closed eyes. &ldquo;It&rsquo;s so wonderful to be back here. Do you know how many times I&rsquo;ve dreamed of this very moment? Standing here, feeling this wind in my hair, and smelling the flowers.&rdquo; She impulsively gave Anita a hug. &ldquo;I can&rsquo;t believe I&rsquo;m here!&rdquo;

&ldquo;Why don&rsquo;t you stay for good this time?&rdquo; Anita asked.

&ldquo;Well, one small matter is making a living on the island.&rdquo;

&ldquo;They always need teachers,&rdquo; Dan said. &ldquo;The pay isn&rsquo;t great, but you could always do like the rest of us and wait tables on the weekends.&rdquo;

&ldquo;We can always find out,&rdquo; Dan replied. He unlocked the trunk of their white compact car and dropped her suitcase inside. It had been a rental car that he had bought from a friend for a low price because the right rear door was smashed in. They still hadn&rsquo;t fixed the door. Teri noticed the rust inside the dented area, which hadn&rsquo;t been there a year ago. She slid into the backseat through the one rear door that did work and made a mental note that, even though they both worked two jobs, they hadn&rsquo;t been able to fix their car. How could she possibly afford to support herself in such an expensive location?

Dan paid the airport parking lot attendant and pulled out into the traffic.

&ldquo;Can you wait for dinner or are you starving? You know it will take about an hour to drive to our side of the island and probably another half hour before we eat,&rdquo; Dan said.

&ldquo;My stomach can wait,&rdquo; Teri answered. The part of her that couldn&rsquo;t wait was her eyes. They longed to feast on the sights of this enchanted paradise. With all the windows down, Dan drove the two-lane highway that linked the two sides of the island. Anita chattered away as they drove, while Teri only half listened. She was too absorbed in the scenery.

First came the waving sugar cane fields in the central valley. To the left rose Haleakala, the great volcano circled in a wreath of clouds that looked like a halo of baby&rsquo;s breath. The road followed the outer rim of the west side of the island, curving through cut volcanic rock and past sequestered sandy coves shaded by palm trees.

Teri drank in the beauty of the blue ocean and the imposing sight of the nearby neighboring islands, popping up out of the Pacific Ocean: Kahoolawe, Lana&rsquo;i, and the green, sleeping giant, Moloka&rsquo;i, which lay only nine miles north of Dan and Anita&rsquo;s small house. She had waited a year in rainy Oregon for this feast of her senses, a year filled with romantic dreams and hope inspired speculations. Now Teri Angelina Raquel Moreno was about to see if those dreams were ready to come true.