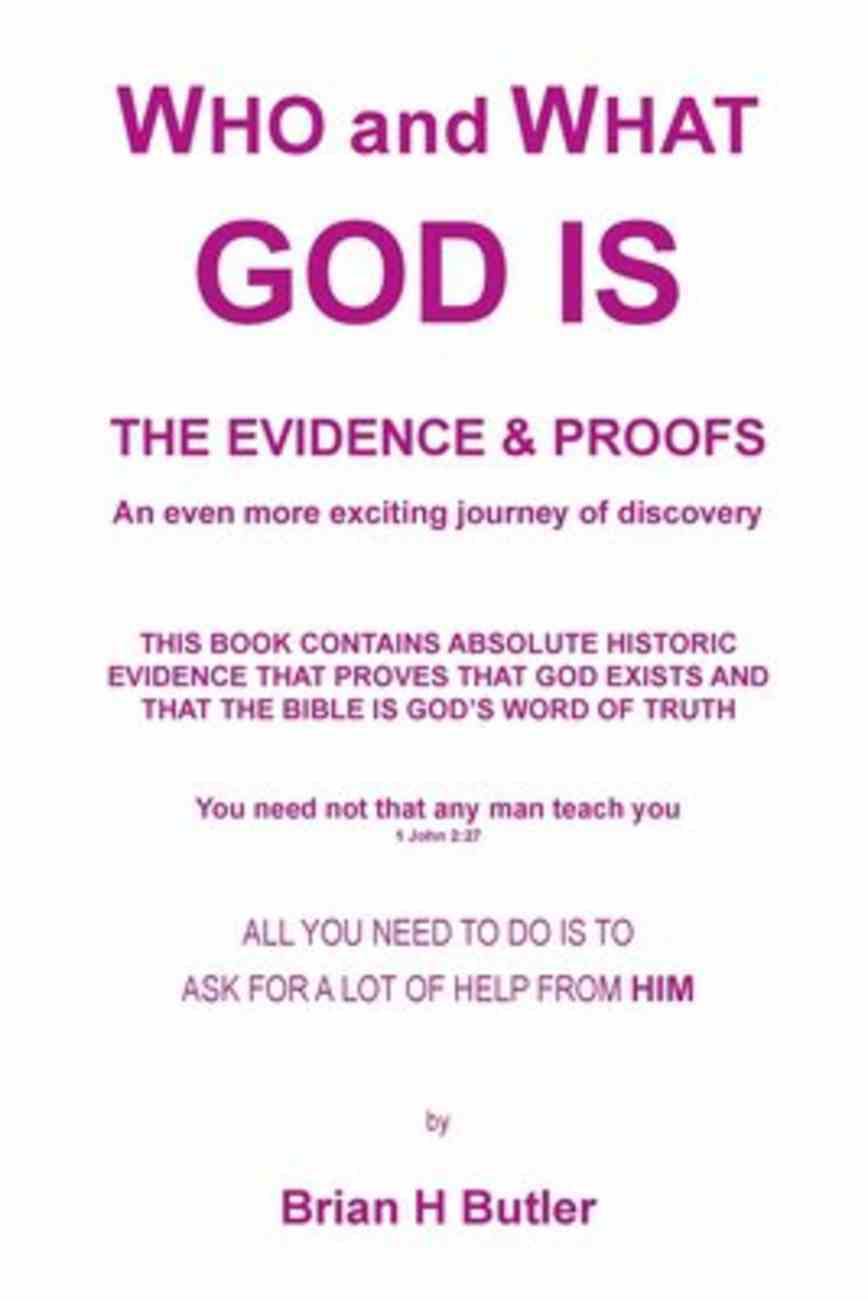 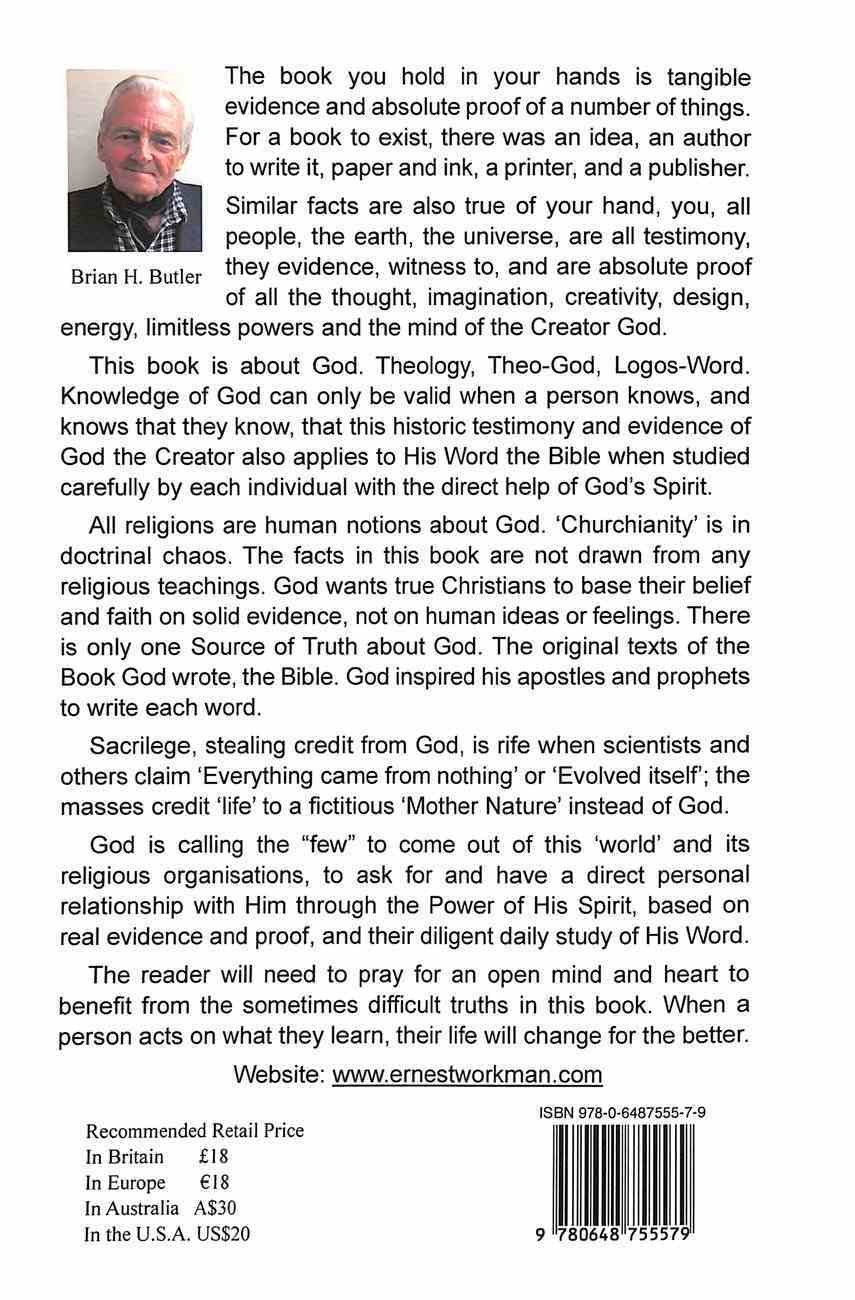 Who and What God is - the Evidence and Proofs

God is the Ultimate Scientist. Everything He does is Scientific. This book examines God's Energies and Powers, His Marvelous Works, which are all based on His True Science. If only more human scientists would use 'true' science which is simply...

Available to order. Your order will be printed by our Melbourne Supplier. Not available In-Store
Expected to ship in 3 to 4 weeks from Australia.
Learn More
Free Shipping
for orders over $99.

Who and What is God: An Exciting Journey of Discovery
Brian H Butler
Paperback

God is the Ultimate Scientist. Everything He does is Scientific. This book examines God's Energies and Powers, His Marvelous Works, which are all based on His True Science. If only more human scientists would use 'true' science which is simply to explore and investigate what IS, the things that God has made. Using the ever more powerful microscopes, when they see the amazing structure of matter, the incredible design and mechanisms of living things, they would want to glorify and praise Him. With telescopes outside earth's atmosphere, we can now see more of the universe that God created than humans have ever seen, and this ought to kindle a sense of wonder at everything we see. The heavens declare the Glory of God. The myriad galaxies speak to us of Him in every language in every place on earth of Him, and His awesome Powers. This book explores and reveals facts known to only a very few people. Many treats are in store for the reader who is able to 'tune in' to the Spiritual information it contains. To do that, they will have to pray for an open mind in order to embrace some of the uncomfortable truths it contains. Scientists, and all others with an inquiring mind who are able to grasp the reality of the evidence and proofs of a Designer and Creator in this book would bring a new dimension to their lives. As they grow up, every child would benefit from the scientific information in it. Christianity based on human reasoning, human belief and faith simply does not work. Thousands of different denominations, each thinking their version of 'truth' is correct demonstrates this fact. Each claims to be able to mediate between God and human beings. There is only One Mediator between God and us, the Living Christ Jesus. The only pathway that leads to a greater understanding of God is for each individual to ask Him directly for His Spiritual gifts of Belief and Faith. Armed with those gifts, we can access the only absolute truths that are contained in the Bible that God wrote by inspiring human beings to write every word in it. God's Word is the only source of pure truth. This book will show the reader HOW to study the Bible effectively, with His help, and discover for themselves what God wants them to learn at any stage of their lives. We do not need any person to teach us when we rely on Him. This book is concrete evidence and proof of several things that you know and know that you know exist: An idea, and author to write it down, a designer, a publisher, all had to exist for the book to be produced. Energy cannot come from nothing, everyone knows that. There has to be a chemical source like in a battery, or a power station to produce energy from a fuel. Energy is invisible, God is the Source of all Energy. Energy is the Ultimate Evidence and proof that God exists, and is the Cause of everything. God inspired men to write His Book the Bible, God's Word, literally Theo-God Word-Logos, a Book which consists almost entirely of the evidence of eyewitnesses, and testimony of other thousands of witnesses. This book, 'WHO and WHAT GOD IS -THE EVIDENCE & PROOFS' is based on that Holy Book, and provides solid concrete evidence
-Publisher