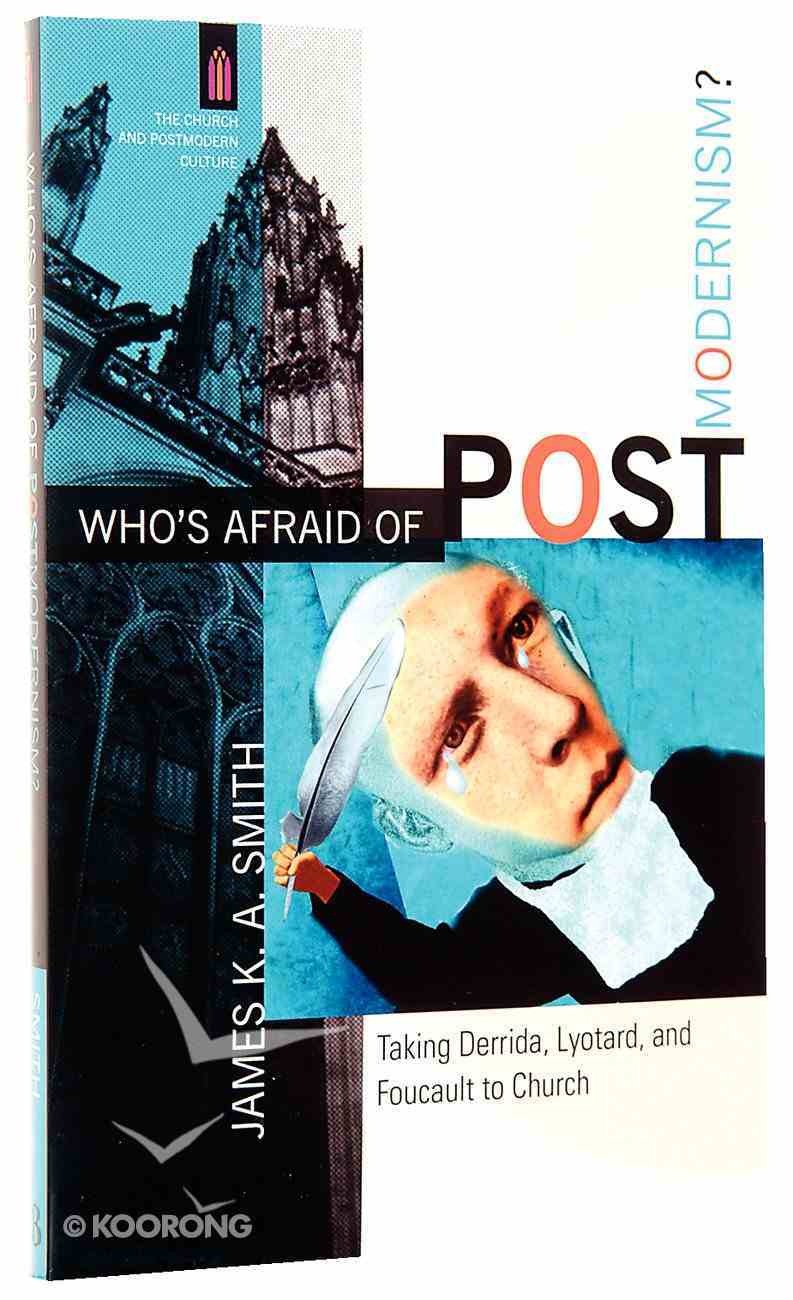 The philosophies of French thinkers Derrrida, Lyotard, and Foucault form the basis of postmodern thought and are seemingly at odds with the Christian faith. In this compellingly argued book, James K A Smith claims that their ideas have been misinterpreted...

How Do We Reason?: An Introduction to Logic
Forrest E Baird
Paperback

How Do We Reason?
Forrest E Baird
eBook

The philosophies of French thinkers Derrrida, Lyotard, and Foucault form the basis of postmodern thought and are seemingly at odds with the Christian faith. In this compellingly argued book, James K A Smith claims that their ideas have been misinterpreted by many Christian critics, and actually have a deep affinity with central Christian claims. 144 pages, from Baker.

The philosophies of French thinkers Derrida, Lyotard, and Foucault form the basis for postmodern thought and are seemingly at odds with the Christian faith. However, James K. A. Smith claims that their ideas have been misinterpreted and actually have a deep affinity with central Christian claims. Each chapter opens with an illustration from a recent movie and concludes with a case study considering recent developments in the church that have attempted to respond to the postmodern condition, such as the "emerging church" movement. These case studies provide a concrete picture of how postmodern ideas can influence the way Christians think and worship. This significant book, winner of a Christianity Today 2007 Book Award, avoids philosophical jargon and offers fuller explanation where needed. It is the first book in the Church and Postmodern Culture series, which provides practical applications for Christians engaged in ministry in a postmodern world.
-Publisher

"Who''s Afraid of Postmodernism? will help many of us. By pointing out dangers and highlighting possibilities, it will help those who are already grappling constructively with postmodernity. And perhaps it will prompt some who seem to be afraid of postmodernism to relax a little more, critique others a little less, and ''redeem the time'' a little more fruitfully."--Brian McLaren, author, lecturer, activist (anewkindofchristian.com)"Who''s Afraid of Postmodernism? will be a boon for those working in and for the churches, especially in the world of evangelicalism. It will wean them from unexamined commitments to modernity and introduce them to a world of new ideas that are perhaps more useful to Christianity than they would have ever thought possible."--Kevin Hart, University of Notre Dame"This delightful book is a twofer. Smith first shows, through a careful reading of the texts, that central themes of three major postmodern philosophers are a threat not to biblical Christianity but only to an all too modern, all too complacent church. He then argues strongly for a church that learns from postmodernism how to revitalize its premodern heritage. The movie analyses that open each chapter render the argument at once more concrete and more powerful."--Merold Westphal, distinguished professor of philosophy, Fordham University"I find Who''s Afraid of Postmodernism? to be stunningly clear. Smith''s writing is not an argument whose logic you must follow but a narrative that opens windows. I continually found myself saying ''Well, of course, why didn''t I see that before? It''s so obvious.'' Smith helps us understand why postmodernism sets the stage for the restoration of the ancient faith."--Robert Webber, Myers Professor of Ministry, Northern Seminary; author of Ancient-Future Faith"Who''s Afraid of Postmodernism? by James K. A. Smith is a powerful and persuasive rejoinder to those in the evangelical academy who persist in pushing the now discredited canard that postmodernism is incompatible with both historical Christianity and the history of orthodoxy. Smith weaves an incredibly insightful exposition of three key postmodern philosophers--Derrida, Lyotard, and Foucault--with illustrations from both popular media and culture. He concludes with a proposal for recovering liturgy and ''redeeming dogma'' while rethinking the mission of ''confessing'' Christianity in a global setting. Postmodernism, according to Smith, is something you not only don''t need to be afraid of any longer but you can even take it to church!"-Carl Raschke, professor of religious studies and chair of the department, University of Denver; author of The Next Reformation Praise for the series:"The proposed series is not just a good idea; it is actually essential. If mission, liturgy, and pastoral care are to be effective today, then churches need a better understanding of so-called postmodern culture as something to be reckoned with and sometimes resisted. Increasingly, there is an educated interest in religion, but there is also a need to be well-informed about postmodern thought and its very complex relation both to postmodern culture (to which it is often actually hostile) and to religion. Again the need is for a critical appreciation--not dismissal and not empty adulation. This new series aims to provide this in an accessible manner. I am convinced that the main ideas of postmodernism are actually not as ''difficult'' as people suppose and that a clear and simple presentation of them actually assists wider cultural discussion. An additional purpose of the series is to introduce to a wider audience theologies that are already trying critically to assimilate the postmodern turn. Since some of these, for example Radical Orthodoxy, are intensely focused on the importance of ''church,'' it is crucial that this occur. Although it is already happening, it needs to crystallize. This new series may be just the thing to bring it about."--John Milbank, University of Nottingham
-Publisher