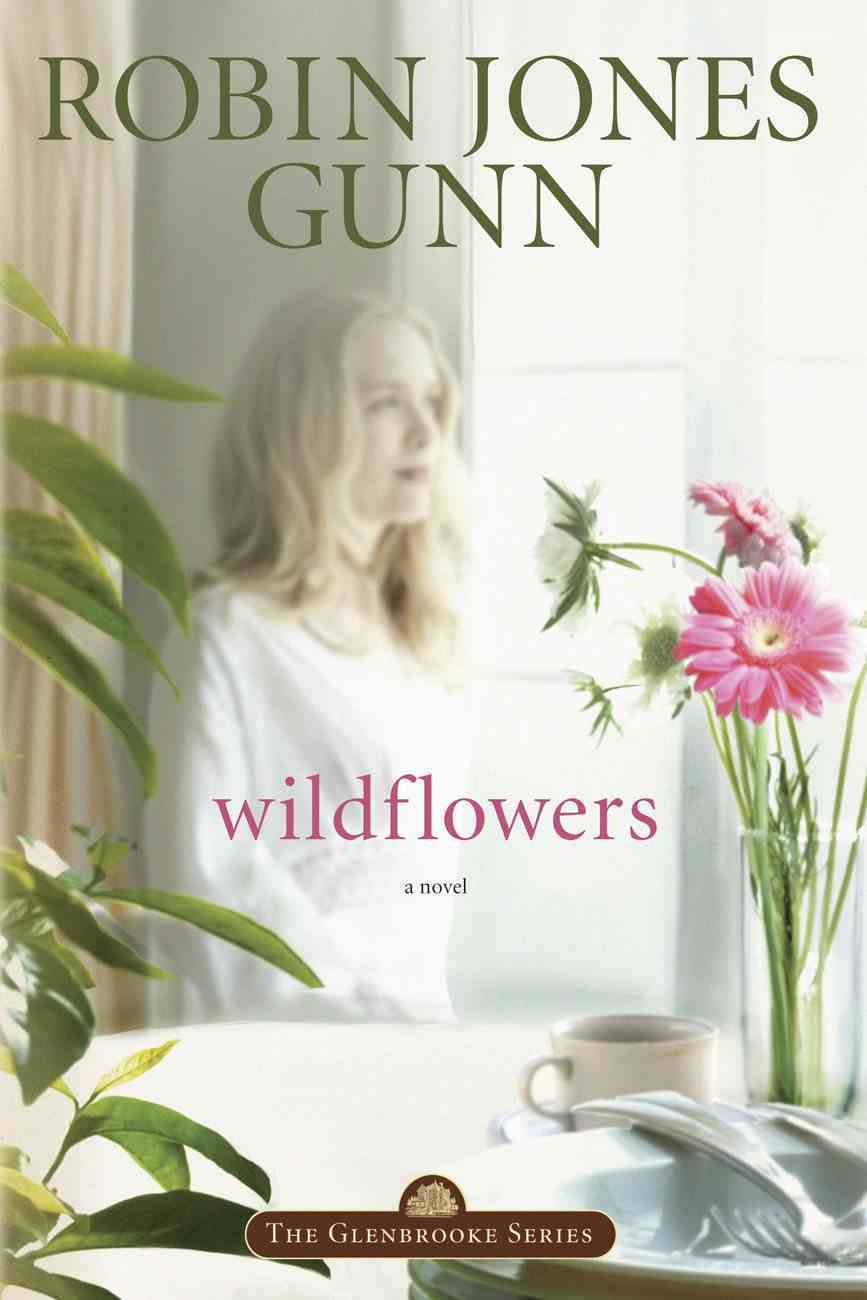 When Genevieve Ahrens moves into the charming community of Glenbrooke, she revives the downtown area by purchasing the Wallflower Restaurant and making it a town favorite. But Gena's heart needs some renovation of its own when her daughter marries and...

2 available
Expected to ship within 14 hours from Australia.
Learn More
Free Shipping
for orders over $99.

When Genevieve Ahrens moves into the charming community of Glenbrooke, she revives the downtown area by purchasing the Wallflower Restaurant and making it a town favorite. But Gena's heart needs some renovation of its own when her daughter marries and Gena is back in touch with her estranged husband. All of her advice to a young friend about forgiving and trusting God to heal the hurt haunts her as she and Stephen talk through what went wrong in their marriage. Will the pain-filled couple experience the joy of God's redeeming grace or the agony of divorce?

Genevieve has been married for over half her life…so how can she suddenly fall deeply in love for the very first time?

Genevieve Ahren’s dream is coming true at last! Glenbrooke’s Wildflowers Cafe goes up for sale and Genevieve knows she can make it into something special.

However, her new venture is far from easy. With her husband gone so often due to his career as an international airline pilot, Genevieve is alone in making all the important decisions. Her heart is empty and hollowed out...like an isolated cottage boarded up for a long winter season.

It’s in the solitude of this dark season that Genevieve discovers friends she didn’t realize she had. When this small circle of tender-hearted women rally around her, Genevieve finds light streaming in through the door of her heart. A door she thought she had locked and bolted long ago. The biggest surprise of all is when Genevieve realizes she is giddily in love—with the last man she expected could make her feel this way!
-Publisher

Genevieve was dreaming. She knew she was dreaming because this was the third&mdash;no, the fourth&mdash;time the same dream had invaded her sleeping mind. The dream always started the same way: She was standing inside her newly acquired Wildflower Caf&eacute;, looking out the window at all her Glenbrooke friends who had gathered to celebrate the grand opening. She was ready to open the door and let them in when she paused. Scanning the smiling faces, she searched for her husband, Steven. But Steven wasn&rsquo;t there.

Steven was never there.

Pressing her eyelids tighter, Genevieve gripped the edge of her dream world and held her breath, willing herself not to wake up. She desperately wanted a new ending to this dream, a conclusion that was different from the way this scene had ended in real life.

A little more than two months ago, when Genevieve stood inside the Wildflower Caf&eacute; the same way she now stood in her dream, the phone had rung. Steven was calling to say he was stuck in Chicago. Heavy snowfall had delayed all flights that day, and he wouldn&rsquo;t be able to fly out until the next morning. She told him she understood. She said she didn&rsquo;t hold it against him.

Yet in her subconscious she kept returning to that moment, waiting in her dream for the phone to ring. This time she would tell him what she really thought. She would let herself cry and tell him it wasn&rsquo;t okay for him to be stuck in Chicago. The snow wasn&rsquo;t a good enough excuse. He had done this to her one too many times.

Genevieve knew that in dreams people could fly on rocket ships or clouds or with wings they had suddenly sprouted. Snowflakes could turn into giant soap bubbles. In dreams, even a weary airline pilot could ride all the way to Glenbrooke inside one of those magic soap bubbles and arrive at the front door of the caf&eacute; at just the right moment.

With all her might, she tried to make the desired ending come to her in her dream. But it was no use. Her dream cut off, as it always did, like a broken reel of a home movie. Once again she was stuck in the darkness, hoping against hope that she could rethread the puddle of dream film gathered at her feet and start up the unresolved scene in her subconscious one more time. But it didn&rsquo;t work. She was stuck.

Genevieve opened her eyes and drew in a deep breath. Get over it, Genevieve. Let it go. This is the way things are.

She blinked, trying to adjust her eyes to the bedroom&rsquo;s darkness. On the rooftop of their warm home pattered the persistent Oregon spring rain. Beside her, Steven slept.

Steven Ahrens, the steady airline captain who had swept Genevieve up into his life more than twenty years ago slept soundly, as he always did. He lay on his back with his left arm above his head and his right arm on his chest. In the faint glow from the digital alarm clock, Genevieve watched her husband&rsquo;s frame as each unhurried breath came after the other. In his sleeping and in his waking, Steven lived his life at a predictable, unruffled pace. Routine was everything. And everything was routine.

Genevieve listened as the rain tapped on the window. She thought about how she had hoped their life would be different when they moved to Glenbrooke. Opening the Wildflower Caf&eacute; was possibly the biggest event in her life, aside from giving birth to their three daughters. Why couldn&rsquo;t Steven have been there with her at the grand opening? Why did she continue to coax a different ending out of her subconscious? She couldn&rsquo;t change the past.

Fluttering on the edge of sleep, Genevieve told herself she didn&rsquo;t want to change everything about the past. Half awake, half asleep, she hovered over a reflecting pool of memories. Her heart had flown often to this familiar place where the earliest images of her love for Steven glistened with pristine clarity and beckoned her to draw closer.

In her mind&rsquo;s eye, Genevieve saw herself swimming in Lake Zurich on that brilliant summer afternoon so many years ago. She was eighteen on the outside and perhaps younger than that in her heart. Her slim frame emerged from the brisk water, and she hurried to the towel she had left on the grass beside her girlfriends. The towel was there, but her friends were gone.

Standing on the corner of her towel was a fair-skinned young man who asked in very poor French if she knew the time. His build was medium and muscular. His fine, short hair was combed straight back. He had a perfectly straight nose that topped the O he formed with his lips like an exclamation point.

Genevieve guessed he was American and answered him in English. His face warmed with a shy, grateful expression. He took off his sunglasses, revealing deep blue eyes, blue like the sky above the clouds. He smiled at her, and Genevieve was smitten.

The memory shifted to a sidewalk caf&eacute; only five blocks from Lake Zurich where Steven was trying his first taste of raspberry strudel with heavy cream. Genevieve wore a pale yellow summer dress and sipped a demitasse of Turkish coffee. Wisps of her thick, brown hair danced across her forehead as she sat across from this fascinating, twenty-fouryear-old man, and she used her well-practiced English to tell him what it was like to grow up in Zurich.

His steady eyes seemed to memorize every detail of her face. He listened to her with an expression that said, &ldquo;You are the most captivating woman I&rsquo;ve ever met. Ask anything of me, and I&rsquo;ll do it.&rdquo;

What she asked of him, without a single word, was for her first kiss. What he gave her with that kiss was a kingdom. His kingdom. His life. And into the life of this soft-spoken man with the warm, steady gaze, Genevieve contentedly had tucked herself like granulated sugar folded into a bowl of whipped-up egg whites.

Now, in the sanctuary of their bedroom, Steven turned toward her in his sleep. His straight nose was only inches from her as his steady breath fluttered over her eyelids. She was so close to him yet Genevieve was so far away. Even the memories of their love&rsquo;s first awakening brought no warmth to her spirit. All the doors to her heart were shut, and all the shades were pulled down tight.

When Genevieve entered the back door of the Wildflower Caf&eacute; at seven-thirty that morning, she felt weary from all the wrestling she had done in the night. She noticed that a few slender sunbeams had managed to slip past the heavy rain clouds. The sunbeams blazed their way through the window above the large kitchen sink, warming her forearm as she washed her hands. Perhaps Glenbrooke would have some sunshine today after all. It made her feel hopeful.

Leah Edwards, Genevieve&rsquo;s assistant, charged through the swinging door from the dining room with her usual energy. &ldquo;Hey, good morning! I didn&rsquo;t expect you this early.&rdquo;

Leah&rsquo;s short blond hair was tucked under a baseball cap, which was her favorite substitute for a chef&rsquo;s hat. When Genevieve catered Leah and Seth&rsquo;s wedding six months ago, a fast friendship formed between the two women. Genevieve soon discovered that she would never have been able to make this dream caf&eacute; a reality if it hadn&rsquo;t been for Leah&rsquo;s choice to leave her former career at the hospital and join her.