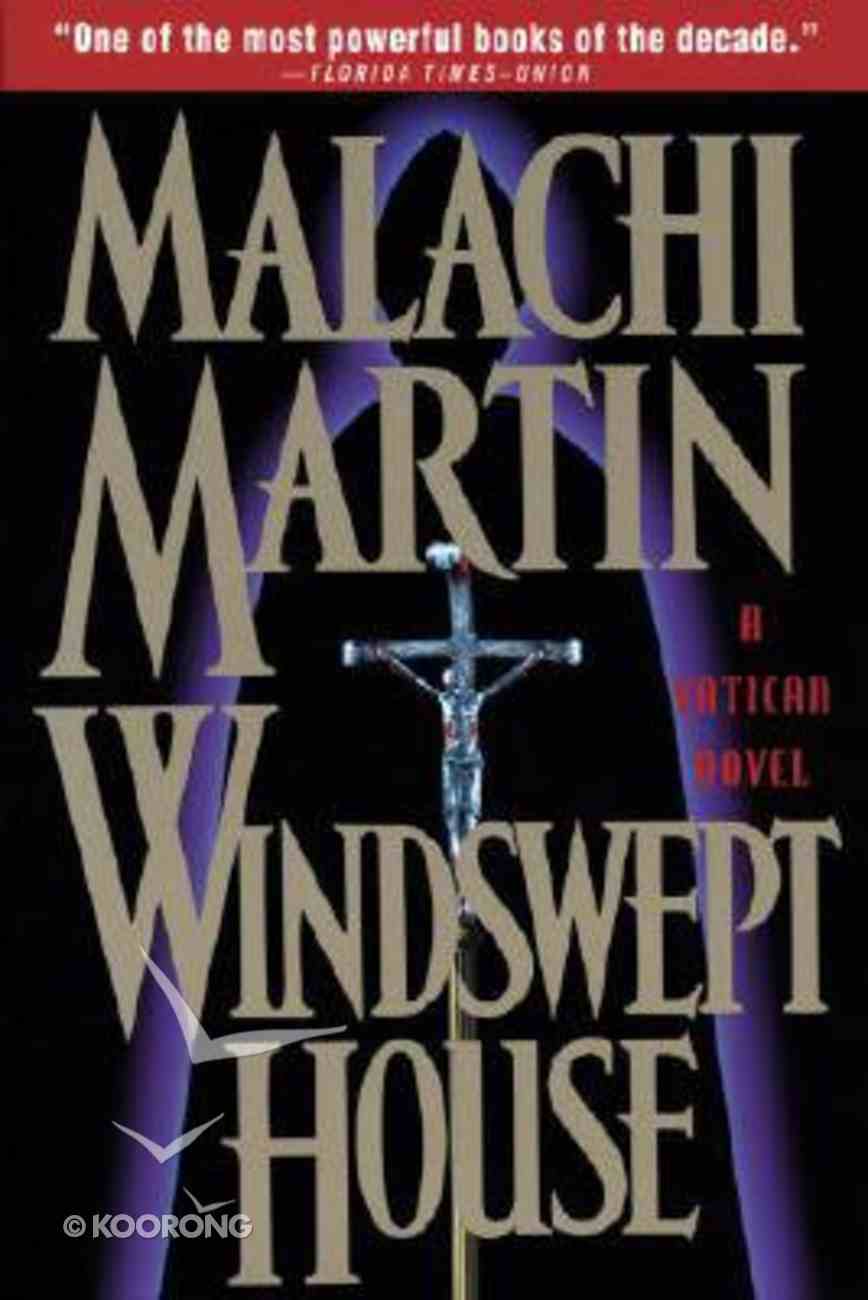 The Cold War has ended. With a scope and daring not possible until now, an unlikely international alliance of top-level political, financial, and religious interests sees the way clear at last to its ultimate goal: the establishment of a single...

The House on Lowell Street
Linda A Keane
Paperback

The Cold War has ended. With a scope and daring not possible until now, an unlikely international alliance of top-level political, financial, and religious interests sees the way clear at last to its ultimate goal: the establishment of a single global society. Utopia.

These are men with nothing in common but immense power and a towering ambition for still more. With world unity and prosperity as their slogan--and with betrayal, scandal, and murder as their ready weapons--they have the means and the will to capture as their own the perfect global machinery for their plans: the oldest, wiliest, and most stable political chancery in the world--the Vatican.

At the vortex of this lethal struggle stands the embattled Pope, a geopolitical genius whose elimination is the short-term solution to a long-term goal, and two American brothers, Paul and Christian Gladstone, one a lawyer and the other a priest, who appear to be the perfect pawns. One falls prey to the sharp teeth of greed for power. The other will become one of the Slavic Pontiff's closest allies...and will discover the darkest secrets at the very heart of papal Rome.

From America to Europe to Russia, in broad landscapes and clandestine corridors, a rich and varied cast--presidents and politicos, simple saints and savvy sinners, popes and pope-makers--clash with one another amid dramatic and sometimes bloody events that will affect the destiny of every person alive today.
-Publisher

"New York Times" Bestselling author Kat Martin lives in Montana and has written over 20 novels. She is a graduate of the University of California at Santa Barbara where she majored in Anthropology and History. Look for her next historical romance available soon from Pocket Books. Visit her website at www.katbooks.com.

Diplomats schooled in harsh times and in the toughest ways of finance, trade and international rivalry are not much given to omens.  Still, today's enterprise brimmed with such promise that the six Foreign Ministers who gathered in Rome on March 25, 1957, felt that everything surrounding them--the rock-solid centrality of Europe's premier city, the cleansing winds, the open skies, the benign smile of the day's climate--was fortune's very cloak of blessing drawn about them as they laid the foundation stone for a new edifice of nations.

As partners in the creation of a new Europe that would sweep away the squabbling nationalism that had so often split this ancient delta, these six men and their governments were one in their faith that they were about to open their lands to a wider economic horizon and a taller political sky than had ever been contemplated.  They were about to sign the treaties of Rome.  They were about to create the European Economic Community.

In recent memory, nothing but death and destruction had been spawned in their capitals.  Only the year before, the Soviets had underscored their expansionist determination in the blood of Hungary's attempted uprising; any day Soviet armor could roll across Europe.  No one expected the U.S.A.  and its Marshall Plan to carry forever the burdens of building the new Europe.  Nor did any European government wish to be clamped between the U.S.A. and the U.S.S.R. in a rivalry that could only deepen in the decades ahead.

As if already accustomed to acting as one in the face of such reality, all six ministers signed on as founders of the EEC.  The three representatives of the Benelux nations, because Belgium, the Netherlands and Luxembourg were the very crucible in which the idea of a new Europe had been tried and found true.  Or at least true enough.  The minister representing France, because his country would be the beating heart of the new Europe, as it had always been of the old Europe.  Italy, because his country was the living soul of Europe.  West Germany, because the world would never shunt his country aside again.

So the European Community was born.  There were toasts to the geopolitical visionaries who had made this day possible.  To Robert Schuman and Jean Monnet of France; to Konrad Adenauer of West Germany; to Paul-Henri Spaak of Belgium. And there were congratulations all around.  It wouldn't be long before Denmark, Ireland and England would see the wisdom of the new venture.  And, while they might require some patient help, Greece, Portugal and Spain would join as well. Of course, there was the matter of holding the Soviets at bay.  And there was the matter of finding a new center of gravity.  But no doubt about it: the nascent EEC was the cutting edge of the new Europe that had to come if Europe was to survive.


When all the signing and sealing and toasting were done, the moment came for the distinctively Roman ritual and privilege of diplomats: an audience with the octogenarian Pope in the Apostolic Palace on Vatican Hill.

Seated on his traditional papal throne amid the panoply of Vatican ceremonial in an ornate sala, His Holiness Pius XII received the six ministers and their entourages with smiling countenance.  His welcome was sincere.  His remarks were brief.  His attitude was of a longtime owner and resident of a vast property giving some pointers to newly arrived and intending residents.

Europe, the Holy Father recalled, had had its eras of greatness when a common faith had animated the hearts of its peoples.  Europe, he urged, would have its geopolitical greatness again, refurbished and burnished anew, if it could create a new heart.  Europe, he intimated, could again forge a supernal, common and binding faith.

Inwardly, the ministers winced.  Pius had pointed to the greatest difficulty facing the EEC on the day of its birth.  Beneath his words lay the warning that neither democratic socialism nor capitalist democracy nor the prospect of the good life nor a mystic "Europa" of the humanists could provide the engine to drive their dream.  Practically speaking, their new Europe lacked a glowing center, a superior force or principle to bind it together and drive it forward. Practically speaking, their Europe lacked what this Pope had.  Lacked what he was.

His points made, the Holy Father traced three crosses in the air as the traditional papal blessing.  Some few knelt to receive it.  Some who remained standing bowed their heads.  But it had become impossible for them to associate the Pope with the healing balm of the God he claimed to represent as Vicar, or to recognize that balm as the only cohesive factor that could mend the world's soul; neither could they acknowledge that economic and political treaties were not the glue that binds the hearts and minds of mankind.

And yet, frail as he was, they could only envy this solitary, enthroned dignitary.  For, as Belgium's Paul-Henri Spaak later remarked, he presided over a universal organization.  And he was more than the elected represenive of that organization.  He was the possessor of its power.  He was its center of gravity.

From the window of his study on the third floor of the Apostolic Palace, the Holy Father watched the architects of the new Europe climb into their limousines in the square below.

"What do you think, Holiness? Can their new Europe develop strongly enough to stop Moscow?"

Pius turned to his companion--a German Jesuit, a longtime friend and favorite confessor.  "Marxism is still the enemy, Father.  But the Anglo-Saxons have the initiative." On this Pope's lips, Anglo-Saxon meant the Anglo-American establishment.  "Their Europe will go far.  And it will go fast.  But the greatest day for Europe has not yet dawned."

The Jesuit failed to follow the papal vision.  "Which Europe, Holiness? The greatest day for whose Europe?"

"For the Europe born today." The Pope's answer was unhesitating.  "On the day this Holy See is harnessed to the new Europe of the diplomats and politicians--to the Europe centered in Brussels and Paris--on that day the Church's misfortunes will start in earnest." Then, turning again to watch the limousines departing across St.  Peter's Square, "The new Europe will have its little day, Father.  But only a day."