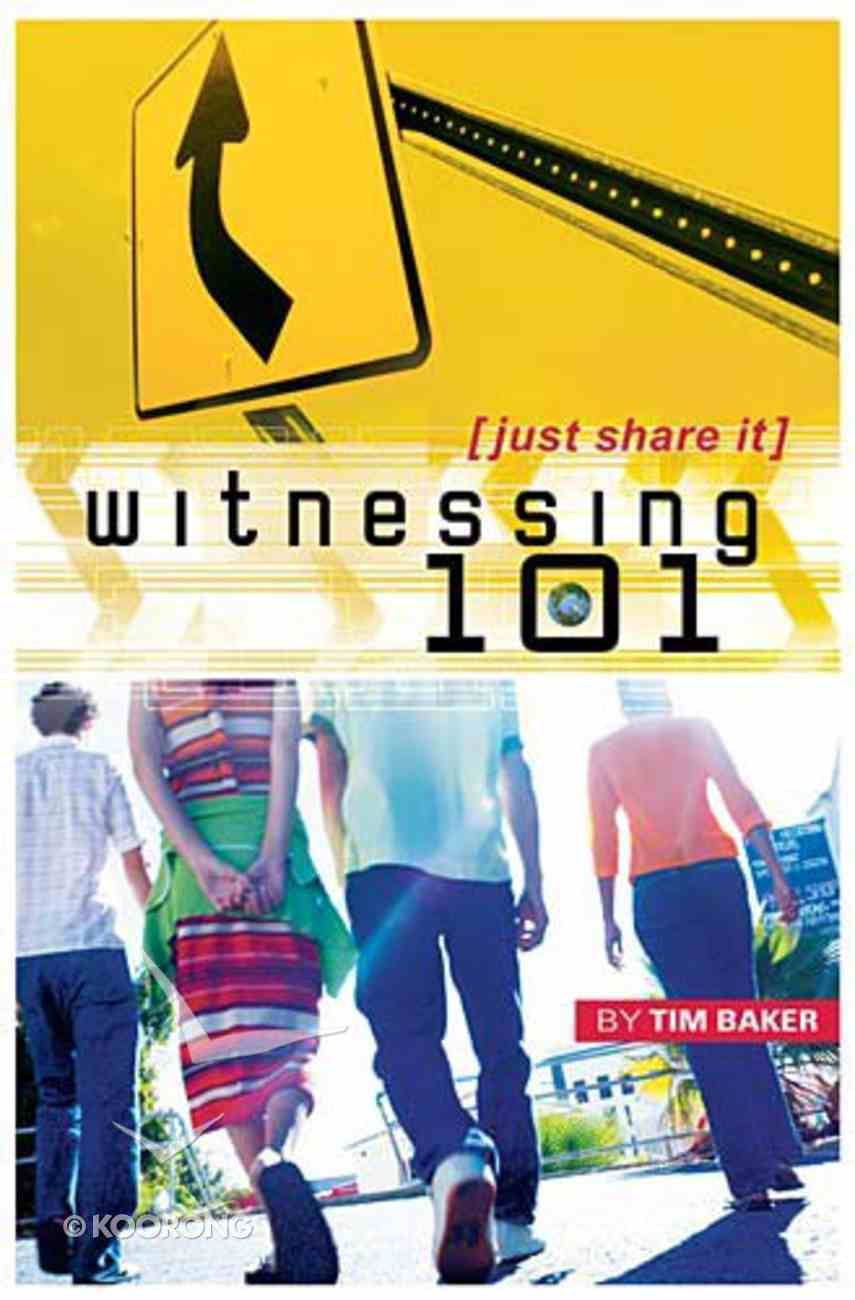 Teens talk to their friends about sports, fashion, and relationships. But how do they talk to their friends about their most important relationship -- with Jesus Christ? Witnessing 101 is a fast-paced and informative guide that can help youth do just that. Beginning with the true gospel message, this book takes teens from the basics of evangelism to the specifics of witnessing to friends at school, in their communities, and even on the Internet. This book offers teens practical advice on what to say -- and what not to say -- when sharing Christ. It is a must-have resource for Christian youth and youth leaders.^Topics include: what isn't the Gospelhow to be a friend firsthow to write your testimonybad witnessing strategieskeeping your passion alive, and more!
-Publisher

Tim Baker is a youth pastor, writer, and Bible teacher who has worked with teens for fifteen years. He is the author of six books, including the Gold Medallion winner Extreme Faith. His other books include subjects like teen devotionals, witnesing and helping teenagers through divorce in a recent title Broken. Bestsellers Why So Many Gods?; Dewitched, Witnessing 101, and Going Out Without Freaking Out .

You and your best friend just got in line to buy concert tickets. You mom dropped you off, and you've got to get them and get back to the mall entrance in less than an hour. Looking at the line, this will not be easy. You and your friend begin to pass the time by talking about Stacey, the new girl you saw in the hall yesterday. You think she rocks. Your friend does too. You begin talking about how you both want to ask her out.
And then it happened.

"Deeeewwwdddd!" Steve walks up. Steve is annoying. You know Steve from church. At church, you tolerate him. Away from church, Steve has the plague.

"Are you guys buying tickets to this concert too? Man, that is awesome. It's gonna be krunked out! Hey, let's get seats together."

Did I mention that Steve is annoying? Steve gets started, and he just won't stop.

"I've been down with Creed since back in the day. Did I tell you that Scott Stapp and I have the same vision for reaching people for Jesus? Yeah, we're a lot alike. You know what I like to do? I like to take one of their songs, play it over and over for someone I've just met in the park and then ask them if they died tonight, do they know they'd go to heaven."
You and your friend give each other the Steve-is-a-freak look. Just as the two of you begin to burst out laughing, Steve pulls a portable CD player out of his pocket, gives you a check-this-out look and heads a few people back.

You watch as he puts headphones on a total stranger and starts the CD. After a few minutes, Steve yanks the headphones off the stranger, opens his Bible, and begins his spiel. The scene is unbelievable. Before long, Steve's project, after trying every other polite tactic, just flat ignores him. Without missing a beat, Steve moves on to the next person.

"Not cool," your friend says.

"What a freak," you respond.


Okay. So maybe you've never actually been in that situation. Never been present when a believing friend laid out his or her faith in the hopes of rescuing someone. Do you know a Steve? Ever been a Steve?
Ever tried to tell someone what you believe about Jesus and been laughed at? Ever tried and got the whole thing totally messed up? Ever felt like you ought to tell someone about Christ, but were too scared, didn't know what to say, or were totally not sure about how to go about it?
Look. You are not alone. The truth is that loads of believers want to tell others about Christ but are too scared. Many try, but don't know what to say. So, if you're scared or unsure, you are not in a crowd by yourself.
When you look at what Jesus said to do with Him, His reality, and His truth, you can't ignore that you've got to say something about Him to unbelieving friends. So, what do you say? How do you live? And, how do you even know that what you've said or how you've lived has made a difference?

There's no easy answers. And, anyone who tells you that there's a simple formula for saving your friends probably doesn't know your friends.
As you try to share what you believe about Jesus, what isn't cool? It isn't cool to be a Steve. And, it is cool to be yourself. If God has done something wonderful in you, then it's totally cool to be yourself, tell others what He's done in you in a way that's both comfortable (that fits you) and compelling (that helps the other person understand Jesus and the change He's made in you).

Witnessing 101 will help you be both comfortable and compelling. Look, we won't load you down with unimportant, useless stuff that might confuse you. You're not going to get a silly system that will help you put notches in your Bible. Instead, you'll find simple stuff you can use as you try to live out what you believe around your unbelieving friends.

Let's Be Real: Living Life as An Open and Honest You
Natasha Bure, Sadie Robertson
Paperback